Fans started piling into Gallagher Way well before first pitch Friday morning. Along the north end of the open park by Wrigley Field sat three statues, all of former Cubs greats: Ernie Banks, Billy Williams and Ron Santo. But it was a pitcher, arguably the best in Cubs history, who would be honored on this day.

Fergie Jenkins’ new statue shows him mid-delivery, an image that graced the cover of Sports Illustrated decades ago. Jenkins spent 10 seasons with the Cubs spread across two stints, with the best years of his career in Chicago. It was a brilliant career, as a plaque in the Hall of Fame and the newly unveiled statue would indicate. But it’s also a window into a different era of baseball, when pitchers “finished what they started,” as Jenkins’ mother, Delores, often urged him to do as a child.

Over his 19-year career, Jenkins amassed 4,500 2/3 innings, tossed 267 complete games and finished top three in Cy Young voting five times, winning it once. Five times in his career he topped 300 innings in a season, topping out at 328 1/3. To think, that didn’t even lead the league that season. And he did all that in an era when a starter pitched every four days, rather than the now traditional five.

“That’s what stands out to me, those guys didn’t come off the mound,” manager David Ross said. “It’s their mentality, it’s fun to listen to them tell stories.”

In 2021, just four pitchers passed the 200-inning mark. Even if we go to the pre-COVID-19 season of 2019, that number only jumps to 15. Meaning, if evenly distributed, just half the teams in baseball had a 200-inning starter. In 1971 when Jenkins won the Cy Young Award and led the NL with 325 innings for the Cubs, Ken Holtzman’s 195 innings ranked fourth on the team. That’s an innings count that would have ranked fifth in all of baseball last year.

“It’s too bad,” Jenkins said. “I don’t think they give them an opportunity to show them what their abilities are. They train to do a certain thing. To pitch 2 2/3 innings, you haven’t even touched their ability. You don’t even get into a ballgame until the fifth or sixth.”

Even since Jenkins was pitching coach in the 1980s, the game has evolved to where starting pitching is treated differently and bullpens are leaned on much more heavily. The Tampa Bay Rays are one of the most efficiently run organizations in baseball; their pitching continually is among the best in the game. But last season, their starters logged the third-fewest innings in the sport.

Openers, multi-inning relievers, playing the matchups and countering every move an opponent makes is how the game is managed. Keegan Thompson can look great for a stretch of starts and it’s not odd to see the Cubs move him out of the rotation, proclaiming he’s more valuable as a weapon out of the bullpen.

Things have changed even in the last decade. The Cubs brought in pitchers like Jon Lester and John Lackey because of their ability to go deep into games. But Lester’s final years with the team are proving to be a potential end to an era. From 2008-to 2016, Lester managed to reach the 200-inning mark eight times. There just aren’t many pitchers like that anymore.

CC Sabathia, part of the Black Aces, a group of pitchers who have won at least 20 games in a season, was in attendance for Jenkins’ statue unveiling. He looks at Jenkins’ numbers in awe.

“When I see Fergie’s stats, I think, should I even be in this group?” Sabathia said. “Man’s got more complete games than I have wins in my career.” 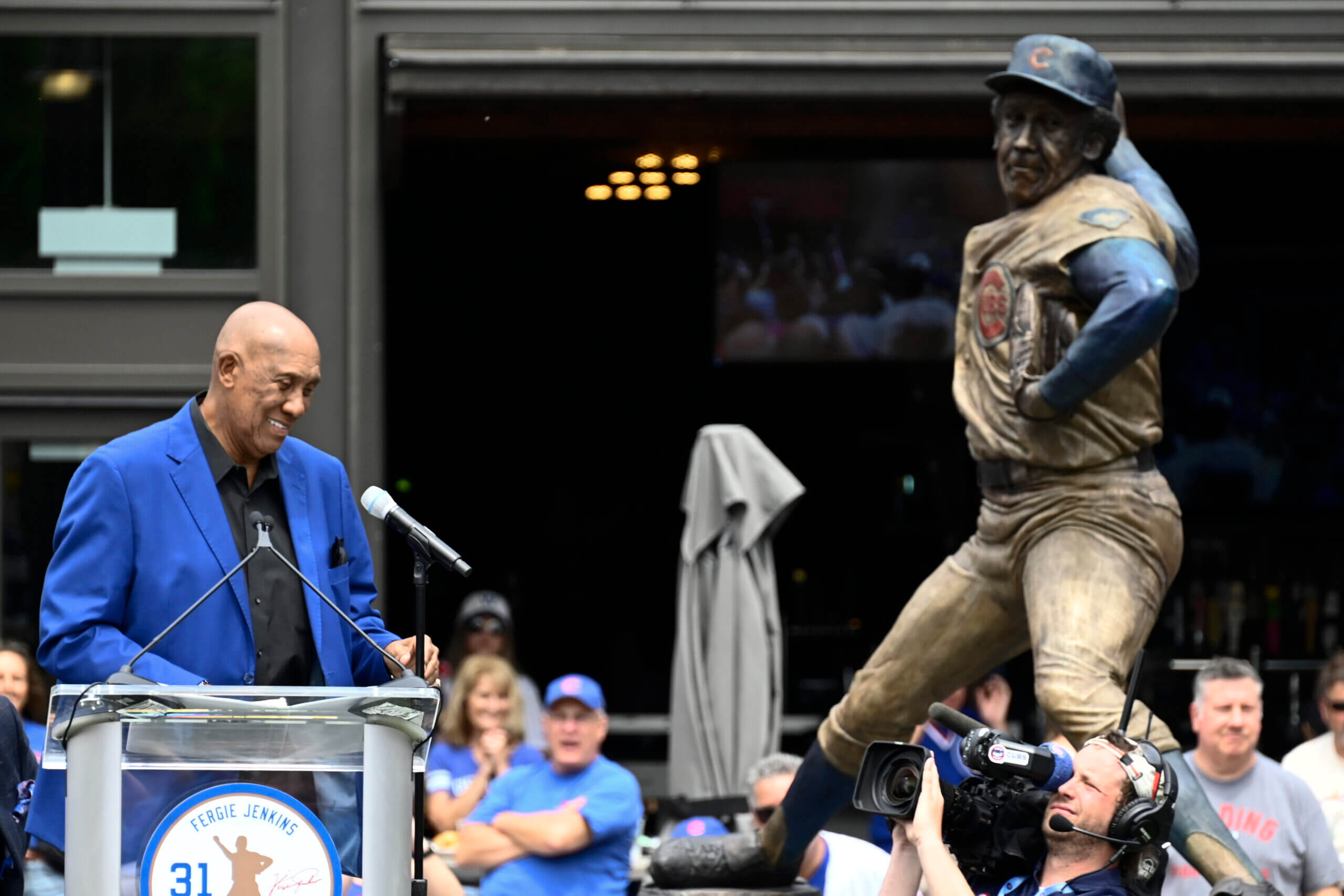 Jenkins had 16 more complete games than Sabathia’s 251 career wins. Sabathia was a contemporary of Lester’s, reaching 200 innings eight times in his career, and surpassing an unheard-of (for his era) 250 innings once. He was his generation’s workhorse. Still, what Jenkins managed to do just doesn’t relate to the current game.

“It’s crazy numbers, stuff that will never be touched again,” Sabathia said. “Twenty-five wins, 30 complete games. These are things guys are never going to do again. There may not even be guys who throw 30 complete games in their career.”

Pitcher wins may be devalued in today’s game, but at minimum, so many wins in a season showed the durability and longevity of those pitchers. And the complete games? Forget it.

“You might see one or two complete games for a ballclub,” Williams said. “I think Fergie had about 25 a year.”

Last season there were 50 complete games; there’s been just four so far this season. From 2017 to 2022, just 229 total. Somehow Jenkins managed 38 more than that over his career.

Perhaps baseball doesn’t need to go back to an era of starters being worked to the point of exhaustion, when only the most special of talents could avoid serious injury. Jenkins said that not once over his 19 years in the big leagues did his elbow ever hurt him. But he’s likely the exception to the rule, a physical anomaly. He not only should be commended for how well he kept his body in shape, but also marveled at for having such a rare ability.

Three-hundred-plus-inning starters likely will never return. But one has to wonder whether baseball will ever again see teams with multiple 200-inning workhorses. Former Cubs team president Theo Epstein grew up watching pitchers like Roger Clemens and would plan his summers knowing he could go to Fenway and see at least seven from his team’s ace. That’s the type of baseball Epstein and many others fell in love with. Now Epstein is part of the group that helps come up with rule changes to help shape the game.

Whether this version of baseball is better or more enjoyable to consume is up for debate. It’s very different though, a type of game that nobody from Jenkins’ era could have envisioned. Sabathia is right: We’ll never see another Jenkins again. Today’s game is more about two-inning bursts from relievers with rising, upper-90s fastballs and breaking balls designed and perfected in a pitching lab. That doesn’t make the game worse or less entertaining than in previous eras, but there’s something to be said for the future Lesters and Sabathias being able to show what they can do. If there’s one thing to be taken away from Jenkins’ day, perhaps it’s exactly that.