Every Brighton & Hove Albion player has his price, but is Marc Cucurella irreplaceable?

It’s a fair question to ask as fans come to terms with losing the flamboyant Spanish defender they immediately fell in love with but only enjoyed for a season — for a jaw-dropping fee.

The Athletic understands the package eventually agreed with Chelsea is a £56 million downpayment, rising to a potential £63 million with add-ons.

Landing Chelsea’s promising central defender Levi Colwill, 19, in a separate deal on loan for the season — without a loan fee which would have applied to several other clubs interested in him — represents by any yardstick, stunning business.

Of course, Brighton and their innovative head coach Graham Potter will find a way around Cucurella’s departure to Stamford Bridge.

It’s a natural next step in the club’s growth, losing players to big clubs because they’re good enough to be attractive to them and coping with the fallout.

It’s just that this time it’s a bit different to the sales of Ben White to Arsenal last summer and Yves Bissouma to Tottenham earlier in this transfer window.

White happened relatively quickly, too, again after one season shining for Brighton in the Premier League and after they’d rejected five bids from Arsenal until they met the £50million ($60.8m) asking price for a player who had broken into the England squad for the European Championship.

Brighton knew they could afford to let White go without replacing him, so well-stocked were they in his main position as a central defender (he also played a few times in the Bissouma role of a deep-lying midfielder).

Potter still had Lewis Dunk, Joel Veltman, Adam Webster and Shane Duffy. He also had Cucurella up his sleeve and Dan Burn, until the latter returned to boyhood club Newcastle for £13million in January.

Bissouma contributed to that record low with his expertise in shielding the back three or back four — depending on Potter’s choice of system.

Brighton were well prepared for his exit in the current window, with only a year remaining on his contract and no sign from the Mali international for months beforehand that he would sign a new deal. 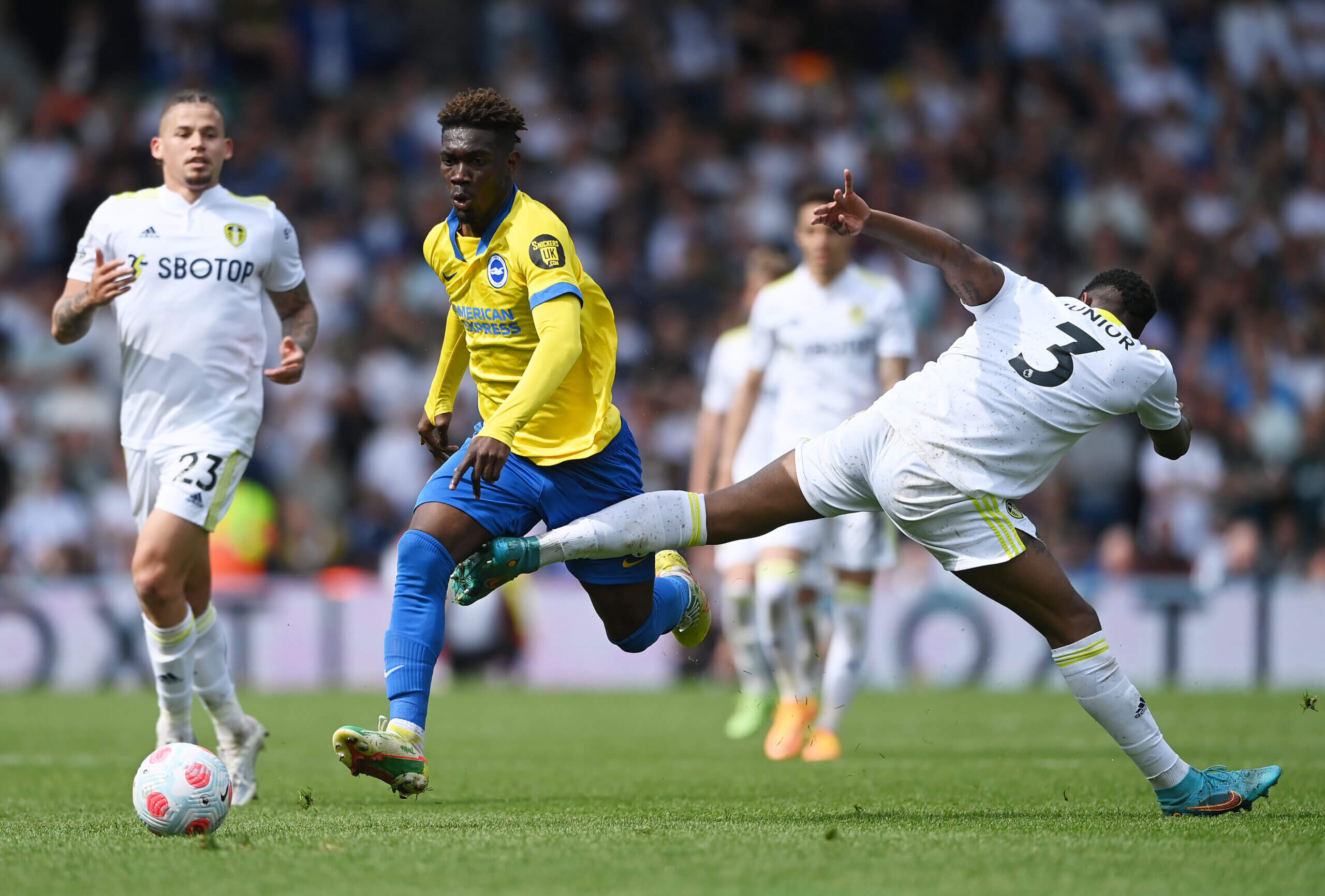 Brighton have also lost Bissouma to one of the Premier League’s big hitters this summer (Photo: Stu Forster/Getty Images)

They were prepared as long ago as the January transfer window last year when they signed promising Ecuador international Moises Caicedo. Potter’s midfield pool was embellished further last summer by the signing of Zambian Enock Mwepu from Red Bull Salzburg.

During pre-season, Potter has adapted to Bissouma’s absence by playing Caicedo and Argentinian international Alexis Mac Allister, another versatile midfielder, as a central pair.

He also still has Adam Lallana, Pascal Gross and Steven Alzate. That’s without Polish international Jakub Moder, who won’t be available until next year after a second operation stemming from a ruptured cruciate knee ligament.

As proved to be the case with White, losing Bissouma shouldn’t hurt them.

Cucurella? That’s another matter. Brighton could not have anticipated that he would do so well in his debut campaign to attract attention from clubs of the stature of Chelsea and Manchester City.

It hasn’t left them unprepared as such — they are always planning well ahead and a left-sided defender has been part of the picture this summer irrespective of Cucurella’s future.

They lost out to Ajax in pursuit of Calvin Bassey from Rangers before the possibility of Cucurella leaving escalated.

But Cucurella solved a headache when he was bought from Getafe last summer for £15million (let that sink in for a moment), namely an accomplished left-back when Potter opts to play a back four.

Colwill strengthens his hand. Brighton regard him also as a left-back and left wing-back option but he’s not a specialist left-back. The same applies to Veltman or Webster, although they could be switched to play there.

Potter has options on the left when he uses a back three and wing-backs. Solly March, Kaoru Mitoma and Leandro Trossard can all fill that wing-back role.

They are all naturally attacking players (March and Mitoma wingers, Trossard a versatile forward), not natural defenders like Cucurella.

The Spaniard’s comfort on the left of a back three was a bonus from the moment he performed so well there for the first time, ironically in the 1-1 draw against Chelsea at Stamford Bridge last December.

Left-sided players are harder to find than right-footers, yet alone one that can thrive in three different positions.

Brighton are being linked with various left-backs across Europe, some more plausible than others, including Angelino from RB Leipzig and Udinese’s Destiny Udogie. The Athletic understands Angelino isn’t on their list of targets.

An added complication, with Cucurella gone for such a big fee, is that sellers will try to hike the price, which contradicts Brighton’s model.

They stick to a policy of buying and selling only at prices in line with their valuations of players.

Losing Cucurella will hurt them. But the price they negotiated for him in the end,  more than four times greater than what they bought him for a year ago, was just too good to turn down.

Martin Tyler apologises after appearing to link Hillsborough with hooliganism