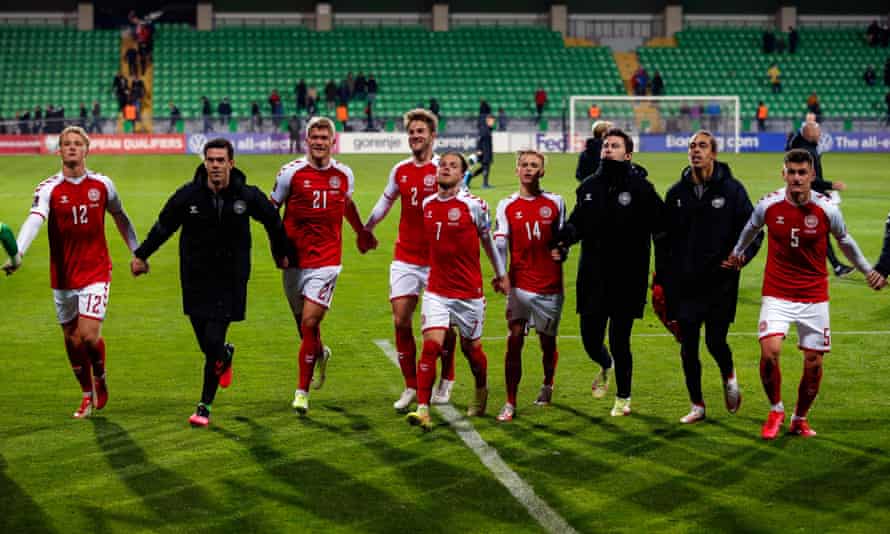 While whatabouting Newcastle fans who decorate their Social Media Disgrace Twitter avatars with photos of Mohammed bin Salman and the national flag of Saudi Arabia might not realise it, it is actually possible to get firmly behind your football team while feeling decidedly conflicted by the consequences of them doing well. On Tuesday night in Copenhagen, for example, Denmark fans will be cheering on their team as they seek to qualify for next year’s Human Rights World Cup, even though huge numbers of them feel their players should not play in any tournament hosted by Qatar.

Of course, to even entertain the notion of boycotting the finals of a tournament, one first has to qualify for them and Denmark could do so later. Having won all seven of their qualifiers, scoring 26 goals and conceding none in the process, the Danes’ progress through Group F could scarcely have been more serene. A win over Austria will guarantee their passage to a tournament their players have repeatedly and openly criticised for some time.

Back in March, before a game against Moldova, their players wore T-shirts bearing the slogan “football supports CHANGE” following reports that thousands of migrant workers have died in Qatar since it won the right to host the tournament. In the interests of pacifying the put-upon Fiver Lawyers, we should probably point out the the country’s government have repeatedly defended their working conditions. More recently, Denmark captain, Ballon d’Or nominee and living saint Simon Kjær stated that while he and his teammates were happy for the Danish FA (DBU) to deal with the “political struggles off the field”, he and his teammates remain emphatically against the HRWC finals being held in Qatar.

“As captain, I must say that we players have not chosen the [Human Rights] World Cup 2022 to be played in Qatar and we are very critical of the conditions we see in the country,” he said. “Of course, we continue to fully and firmly support the DBU’s critical line towards Qatar. We players have several times publicly shown our position in relation to the [HRWC] in Qatar, but now we have to keep the focus on the game on the field.” Should Denmark win later, Kjær, his teammates and their fans are entitled to enjoy a party but don’t expect to see any of them dancing around the Parken Stadium wearing tea-towels on their head.

Join Barry Glendenning from 7.45pm BST for hot MBM coverage of England 2-0 Hungary in their HR World Cup qualifier, while Simon Burnton will be clockwatching the rest of the night’s action.

QUOTE OF THE DAY

“There are invisible banana skins and unspoken words which are much more damaging” – John Barnes talks to Donald McRae about racism, the silent pillars of prejudice in society and why there aren’t more black managers.

“Obviously the NFL picked the wrong game to play in London this past weekend. After all, who would appreciate a match with five consecutive kicks that would’ve won the game taken at the end of the game or in extra-time missing wide or hitting the post more than English fans?” – Steve Wardinski.

“Re: Stan Collymore suggesting he will be able to influence who gets to be Southend United’s new manager (yesterday’s News, Bits and Bobs). Does turning for advice to a former player (30 games nearly 30 years ago) with no managerial experience pretty much sum up why the club is in such a mess?” – Ed Taylor.

“While the EFL’s Green Code is commendable (yesterday’s Still Want More?), why didn’t Trevor Birch look a little closer to home? The early rounds of the Milk Cup are regionalised, but once the competition reaches the last 32 it goes national. Keeping it regionalised (and sub-regional in the early rounds) would have avoided Leeds going to Fulham and Arsenal in successive rounds, and West Ham playing both Manchester clubs. Think of the carbon savings. A missed opportunity or maybe a proposal for 2022-23?” – Deryck Hall.

“Re: Jon Millard on Newcastle still being Newcastle (yesterday’s Fiver letters). Abu Dhabi bought Manchester City. You know, Manchester City. It took them a while to shake off Cityitis – although not completely, as illustrated by the occasional self-inflicted implosion” – Darren Leathley.

Send your letters to [email protected]. And you can always tweet The Fiver via @guardian_sport. Today’s winner of our prizeless letter o’ the day is … Steve Wardinski.

A former employee at Football Index has a blunt explanation for why the betting platform failed. “They sold loads and loads of bets at prices that were stupid,” they sighed. “We couldn’t work it out, we literally didn’t have a clue.”

Gareth Southgate reckons Harry Kane can put his slippers on and relax into his old England goalscoring form. “He feels settled in our environment,” soothed Southgate. “What’s going on at [Spurs] is none of my business, really.”

Wales boss Robert Page can’t wait for the remaining two qualifiers against Belarus and Belgium after a 1-0 win over Estonia kept them in the hunt for an HRWC play-off place. “There are two cup finals,” he roared. “At home, full house. Bring it on!”

A flamin’ own goal meant Australia suffered the first defeat of their HRWC qualifying campaign against Japan, who have been rubbish lately.

Adidas have stuck the boot into Fifa plans for a big biennial jamboree. “I don’t think much of a football World Cup held every two years,” pffftd the company’s three-striped chief suit Kasper Rorsted.

There’s a new Wayne Rooney documentary coming as he looks back on his life and career. “[People] will get a real insight into what was going on inside my head,” he tooted.

And Claudio Ranieri reckons Watford will “lose some matches” but, like Cilla Black in her primetime pomp, also “make some surprises”.

Ben Fisher on the wily old pros who are signed to guide Premier League wannabes at under-23 level.

Mason Mount is being pushed to the next level by fantastic Phil Foden, writes David Hytner.

And if it’s your thing … you can follow Big Website on Big Social FaceSpace. And INSTACHAT, TOO!

What channel is Warriors vs. Clippers on tonight? Time, TV schedule, live streaming