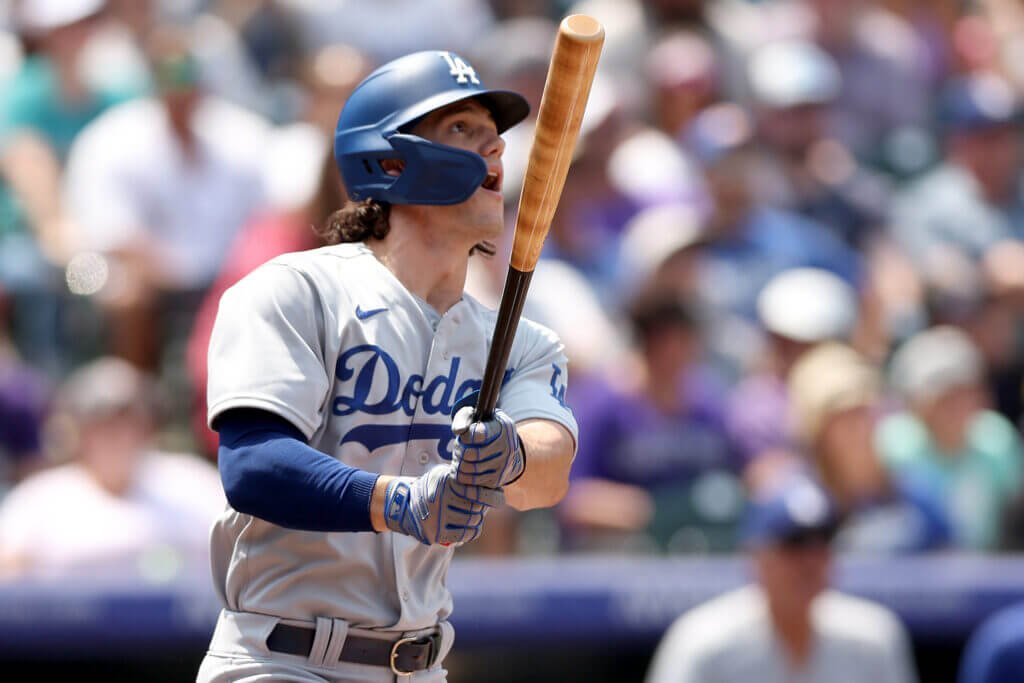 DENVER — As he uncorked his once “caveman”-like swing, James Outman looked up in disbelief. His first trip to the box had already broken new ground. The rock-shaped scoreboard in left at Coors Field and 36,212 of Outman’s friends, family and now witnesses to history were a reminder of that.

Now, he was watching as the ball he hit soared toward then over the high right-field wall, the defining moment in the Dodgers’ 7-3 win Sunday against the Rockies.

He became just the fourth Dodgers player in the 64 years since they moved to Los Angeles to hit a home run in his first big-league plate appearance. Water splashed out of the visiting dugout as Outman rounded the bases. Dodgers reliever Alex Vesia, who moments earlier had placed his hat in front of his seat — as part of a long-running game among his bullpen mates, this was Vesia signaling he was “calling” a home run in this at-bat — held up the baseball in triumph, securing it for safekeeping from the most memorable swing of Outman’s baseball life.

It’ll be on the flight Sunday night, too, as Outman returns to Oracle Park, the place he’d attended games as a kid growing up in Redwood City, Calif.

“This is what you dream about,” manager Dave Roberts said.

The moments that followed just buzzed around Outman. His face cracked in a permanent smile. His legs felt like jelly.

“To be honest,” Outman said afterward, “I don’t remember like 30 minutes after I hit that. I was just running high.”

It kicked off a day that ended in rare company.

Ernie Koy, a right-handed hitting outfielder from Texas, debuted for the Brooklyn Dodgers in 1938 at age 28 and hit third, slamming a home run in his first-ever appearance in the big leagues. He doubled his next time up and added a single in a 3-for-5 debut.

José Offerman was just 21 years old when he debuted at Dodger Stadium against the Expos, playing shortstop and leading off with a solo shot off Dennis Martinez. He added a couple of singles for good measure, joining Koy as just the second player in franchise history to record three or more hits and hit a home run in his debut.

Before Outman, who followed up his third-inning home run with a 109.5 mph single off Rockies reliever Robert Stephenson. An inning later, he roped an RBI double, emerging from the periphery of Dodgers prospect lists for one of the most notable debuts in the franchise.

His arrival was a surprise, just two years after a complete swing overhaul and months after being a surprise inclusion on the Dodgers’ 40-man roster over the winter. His torrid start in Double A put him on the radar; Zach McKinstry’s inclusion in the Dodgers’ trade for reliever Chris Martin made Outman’s debut a reality, less than a month after he took his first Triple-A at-bat.

“I don’t think anyone could have imagined this,” Roberts said. “(But) scouting, player development — you talk about the high payroll, but we’ve got a lot of guys that come through our system that perform too. James Outman is another one of them.”

Outman’s breakthrough of a debut only cemented another piece of Dodgers history. They wrapped up a July in which they played 26 times and lost only five — a win percentage of .808 that matched the fourth-best July in major-league history, approaching the type of territory last seen from this very same club five Julys ago, when they lost just three of 23 games.

It could’ve been even more fruitful, too: The Dodgers’ loss to the Rockies on Saturday was their third of the month against a last-place opponent.

“The win-loss has obviously been fantastic,” Roberts said.

It’s also taken the tension out of what once seemed to be a competitive division race. The Dodgers entered the month with a 3 1/2-game edge over the Padres. As July ended, their lead had swelled to 12 games. San Diego, which went 11-14 for the month, only gained a game’s worth of ground twice.

Tony Gonsolin’s entire season has been about breaking new ground. He was an All-Star for the first time, an arrival after years of tantalizing potential and maddening stretches of inefficiency. He found himself, and with it, a new level. Sunday’s barrier-breaker was a testament to his brilliance over the course of the season, crossing the 100-inning mark for the first time as a big leaguer and just the second time of his baseball life.

It was also a reminder of the next challenge: finishing this great start. The right-hander stumbled into and out of the break, allowing a combined nine runs over 11 innings in his last two starts. Sunday’s “grind” of an outing provided more than a few moments that flashed back to the traffic-filled, short-lived outings that had defined Gonsolin’s early career. His fastball command was erratic, as it has been of late. His splitter didn’t drop the way he’d intended it to in the thin Denver air — “Splitter was a little weird,” he said. And he lasted just five innings, his pitch count chasing him even as he escaped Coors Field with just three runs against his tally.

It raised his ERA to a still-sterling 2.41 for the season. The Dodgers’ rotation, despite having a couple of Coors-like outings to end the week, still remains the game’s best by that measure, too.

But navigating the rest is something the Dodgers are going to have to figure out, especially with Gonsolin.

“Everybody goes through their ups and downs,” Gonsolin said. “Hopefully, this is just a quick down and then we can turn it around.”

They were also essentially the two men left standing on a postseason rotation that appeared to be a strength as last October neared. Clayton Kershaw missed the postseason with an elbow issue. Max Scherzer, the club’s trade deadline acquisition, couldn’t pitch in the decisive Game 6 of the NLCS because his right arm was “overcooked.”

Figuring out the postseason rotation now is an intriguing, if not fruitless, exercise, especially for a rotation that’s waiting on the potential returns of Dustin May and Walker Buehler before October. Gonsolin, Kershaw and Tyler Anderson were All-Stars this year, too, and Urías deserved consideration. Keeping them going this well in two months might be the most intriguing storyline remaining this season, with Gonsolin the one under the microscope.

“I think we as an industry try to think there is a one-size-fits-all (workload),” Roberts said before Sunday’s contest. “There’s no one formula. Every player is different. Some guys will hit a wall and they can’t recover. Some guys get a second wind, and some guys continue to go on and push borders. So you don’t know until you know. This is something that, each start, we’re gonna continue to learn more. We’re watching his stuff, how it plays, how he recovers. All that stuff kind of bleeds into decisions and how we use them.”

Ceremony and celebration at the 2022 Garma festival – in pictures

China and Taiwan: what’s behind the tensions – in 30 seconds | China