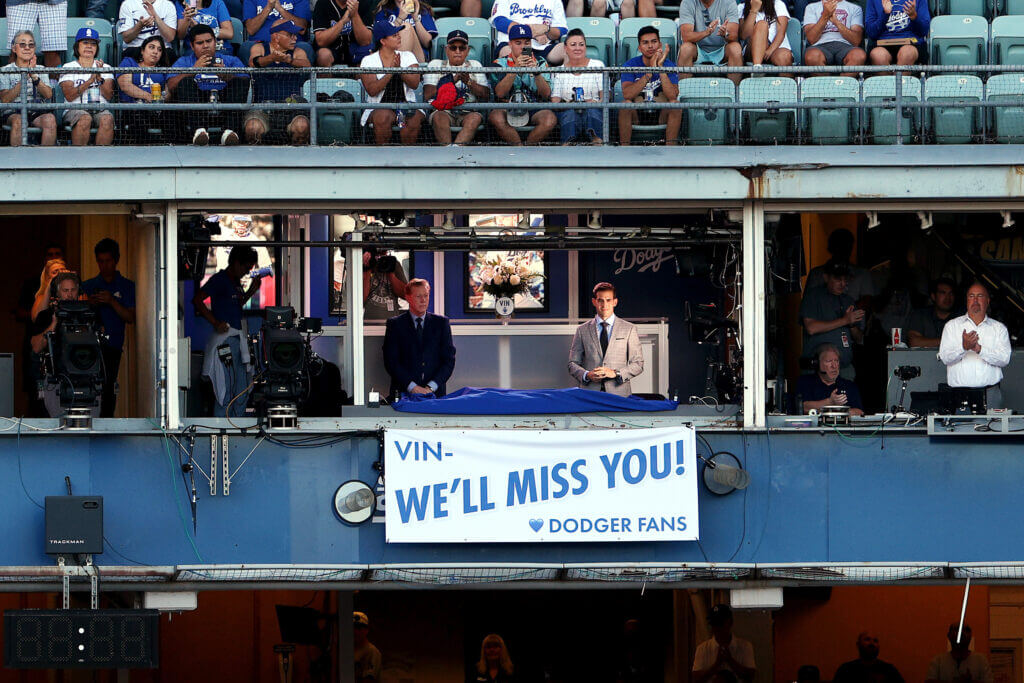 The Dodgers honored historic broadcaster Vin Scully on Friday night before their game against the Padres with a pregame tribute. The legendary broadcaster died on Tuesday at the age of 94.

The entranceway to the place Scully sat for 54 of his 67 seasons as the voice of the Dodgers and city of Los Angeles was decorated as a shrine with photos of perhaps the most iconic man to ever grace the microphone for a baseball broadcast.

The headset and scorebook that Scully used the final season of his career remain around the corner, under a case of glass. It remains a common stopping point for fans arriving at the 60-year-old ballpark, a lasting memory of a voice that captured so many of them.

A bouquet of flowers hung alongside the sign in left field bearing Scully’s name and microphone in the Dodgers’ ring of honor. Fans placed photos and ornaments in front of the ballpark he called home on Vin Scully Ave., each with memories of Scully calling games from Robinson to Koufax to Kershaw.

Friday, they paid tribute. It was a ballpark, mourning over a man that was as connected with the city of Los Angeles as any public figure, let alone a sports figure. They painted an emblem with “VIN” written on it on the back of the Dodger Stadium mound.

“One of the greatest, if not the greatest, Dodger of all time,” manager Dave Roberts said. “He is the connection. He’s the connection, the fabric from the fans to the organization. I think that if you look at 60 years of Dodger baseball. Players change, teams are different. But he was the one constant…He was kind of the thread.”

The Dodgers showed highlights on the video board, including the club’s broadcast network’s behind-the-scenes footage of what was Scully’s final home broadcast in 2016 – a game the Dodgers won on a Charlie Culberson walk-off home run to win the NL West crown. That day, Scully unfurled a banner in front of his booth, that read:

A 15-minute ceremony honoring the legendary broadcast cycled through his greatest moments, his life and photographs from current and former Dodger figures overlaid in front of Scully’s script writing in his scorebook.

Roberts then took over the microphone. He motioned up to Scully’s old booth, and for Joe Davis – Scully’s heir apparent in calling play-by-play for the Dodgers – and former Dodger and current broadcaster Orel Hershiser to unfurl a banner of their own.

In his final call on the Dodger airwaves, Scully resisted the heaping of praises from those who’d come to share the impact Scully had on their lives, their families and baseball.

“I always needed you more than you needed me,” Scully would say as he signed off.

Friday, once again, showed that wasn’t the case.

(Photo by Harry How / Getty Images)

Demaryius Thomas died due to ‘complications from a seizure disorder’, autopsy says