LOS ANGELES — Sandy Koufax was 19 years old when he stepped into the home clubhouse of the team he’d grown up in Brooklyn watching, the one that by the time Koufax turned 22 would move to Los Angeles and become a West Coast baseball institution behind the weight of his left arm.

Koufax was a “bonus baby” then, paid so handsomely for the time that the Dodgers would have to keep him on their major-league roster for the entire 1955 season. It alienated teammates, the prospect of a hard-throwing left-hander who even now says pitching for the Brooklyn club “was even more surprising than the thought of playing for the New York Knicks.”

Instead, the teenaged Koufax took to the welcoming friendship of a veteran Dodger, a former MVP who, along with Koufax, represents the greatness of the bicoastal and storied annals of the franchise: Jackie Robinson.

“Jackie,” Koufax recalled on Saturday, “went out of his way to make me feel welcome. I’ll never forget his kindness.”

Robinson is a transformative figure in country and sport, whose legacy was celebrated in April on the 75th anniversary of his breaking the color barrier. Back in 2015, the Dodgers unveiled a statue in his honor at Dodger Stadium. 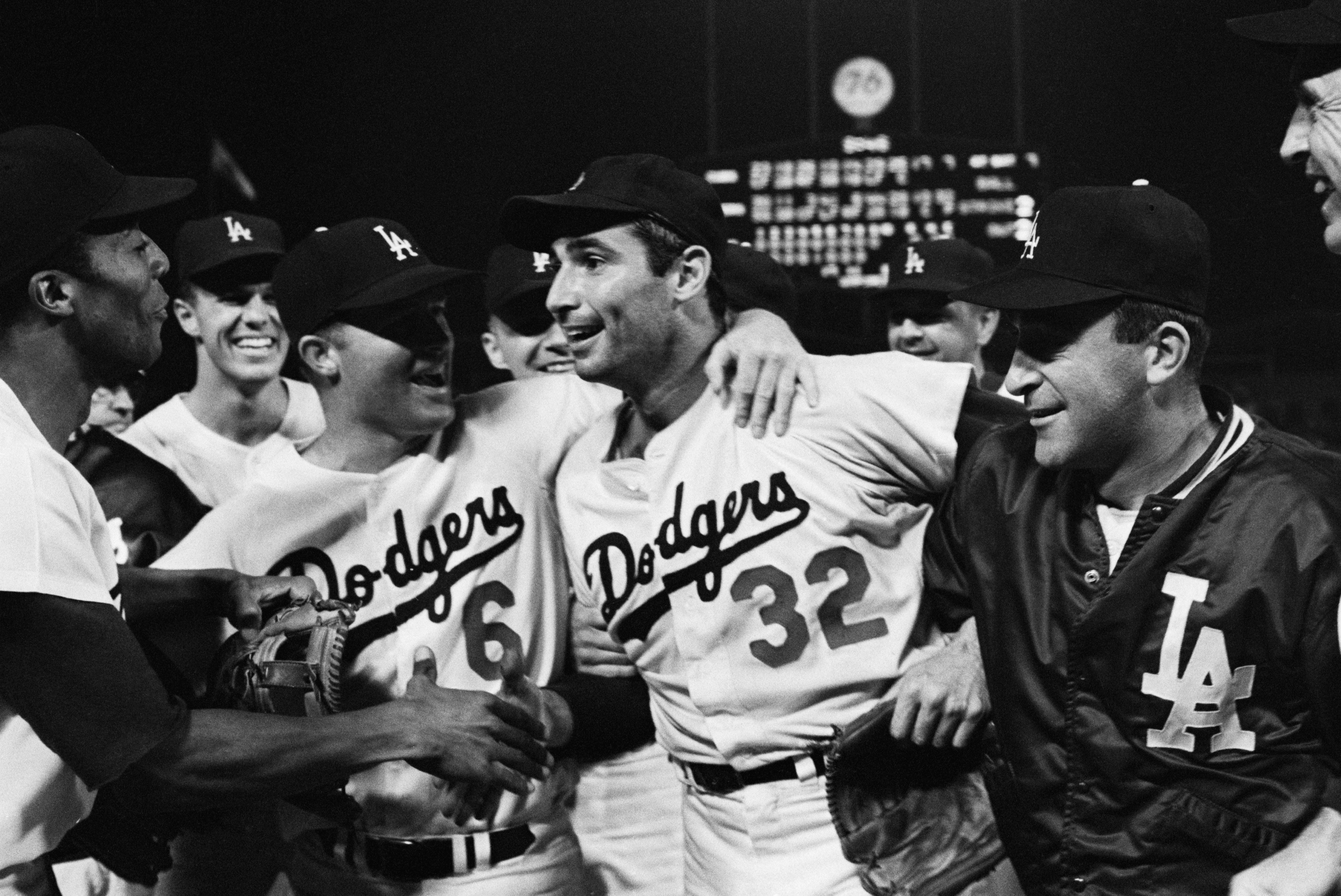 Dodger pitcher Sandy Koufax gets mobbed by teammates after pitching a perfect game, one of his four career no-hitters. (Getty Images)

And on Sunday, a statue of Koufax, his imitable, memorable leg kick and all, was unveiled alongside Jackie, a recognition of perhaps the greatest left-handed pitcher ever and perhaps the defining Los Angeles Dodger.

“An African American athlete from Pasadena,” Dodgers radio broadcaster Charley Steiner said in Saturday’s ceremony, “is about to be joined by a Jewish left-hander from Brooklyn.” Robinson’s legacy was established in Koufax’s hometown, just as Koufax’s legend was crafted not far from where Robinson grew up. Two men, forever linked in the franchise’s iconic multicity history.

“Sixty-seven years ago, Jackie Robinson became my teammate and friend,” Koufax said. “At that time sharing this space with him would have been absolutely unimaginable. And today it still is. It’s one of the greatest honors of my life.”

As Koufax spoke, the center-field fence in the sparkly plaza at Dodger Stadium remained open. It was Koufax at the dais, behind him the mound he called home for so long. It’s an honor long overdue, more than 50 years after Koufax, Robinson and Roy Campanella became the first Dodgers to have their numbers retired and a half-century since Koufax, at 36, became the youngest person ever inducted into the National Baseball Hall of Fame.

His arthritic left elbow wore the weight of his historic dominance and ended his career prematurely. Of his 314 career starts, Koufax tossed a complete game in 137 of them. He retired at age 30 having thrown more no-hitters (four) at the time than any pitcher ever, including a perfect game in 1965, his penultimate season. And as he helped clinch the last of his three World Series titles, he took a stand.

He pulled himself from Game 1 of the 1965 series when the date fell on Yom Kippur, the holiest day of the year in his Jewish faith. Then he pitched Games 2, 5 and 7, allowing just two runs and twirling two complete games, including a 10-strikeout shutout in the clincher.

“You knew he was pitching because you could hear it,” said Joe Torre, a fellow Brooklyn native and contemporary who played with the Milwaukee Braves and would go on to his own Hall of Fame career managing the Yankees and Dodgers.

In his dominant late-career stretch, the left-hander had been as fearsome as any pitcher in the sport. And in his 1963 campaign, the one that won Koufax an MVP award, he’d been a marvel. He started 40 games, striking out more than 300 batters for the first time and holding an ERA of 1.88 that, to that point, had been a career best.

Years later, when Torre was managing in Los Angeles, he’d ask Koufax a frequent question. Why, Torre would jab, would Koufax issue seven intentional walks? When you have a 1.88 ERA, who the heck are you afraid to pitch to?

“They’re all named Henry Aaron,” Koufax would respond, wryly, of the man who he put on intentionally more than any other in his career.

Torre would recall a video of the late Aaron, who retired as baseball’s all-time home run king with 755 homers, describing facing the brutal two-pitch sequence that Koufax turned into magic.

“If I was looking for Sandy’s fastball when I wanted to hit, it would have to, in my eye, be ankle-high to start with, because then it would finish somewhere in here (chest high),” Torre recalled. “And then the curveball would be up here somewhere (over his head) because if you would look for it at a hitter’s spot, it would be in the dirt. He was remarkable.”

Torre hesitated to even recall his own experiences. “I have to be careful how I word things because I say I hit against Sandy Koufax, but I have to take that back,” he said. “I faced Sandy Koufax.”

The statue, said its sculptor, Branly Cadet (who was also commissioned to create Robinson’s statue), represents the strength that carried Koufax on the mound, the presence he found as his career burned a brilliant ember. On a staff that, in his final season, included the Dodgers’ lone 300-game winner, Don Sutton, along with an indomitable fellow Hall of Famer in Don Drysdale, Koufax was at the center of it.

And when a promising young left-hander from Texas turned into one of the best pitchers in his generation while donning the same uniform, it was Koufax that Clayton Kershaw was compared to, creating a bond that nearly brought Kershaw to tears as he spoke of his friend Saturday morning.

“There have been so many incredible pitchers in the Dodgers’ storied history, and you hear about them a lot, but Sandy stood out,” Kershaw said. “He always did.

“In the years and generations to come, I hope a kid sees this statue and asks his mom or dad about Sandy Koufax, and I hope that they tell them, ‘He was a great pitcher, but more than that, he was a great man who represented the Dodgers with humility, kindness, passion and class. For every rookie who sees this statue for the first time and asks, ‘Was he any good?’ I hope the veterans tell him simply that he was the best to ever do it.”

Koufax is a luminary in a franchise filled with them, a historic figure spoken of in admirable tones from the likes of Kershaw and Vin Scully.

The Dodgers made it clear Saturday that they feel the same about Koufax: the greatest of all time, period. No discussion.

Brilliant Kyrgios beaten in Halle thriller but primed for Wimbledon