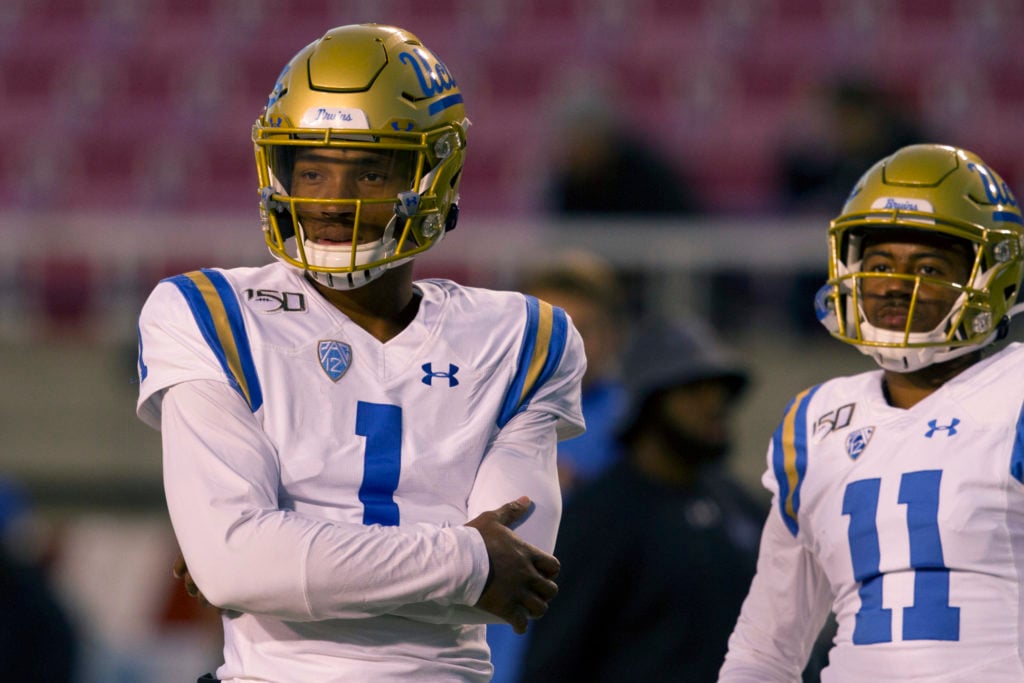 LOS ANGELES — Walk through UCLA’s Wasserman Football Center and you’ll find a chess board everywhere from the locker room to the quarterback room to a support staffer’s office. Seth Makowsky, a chess coach who now works with college and NFL quarterbacks, began working with the program a few years ago and has become a mentor to several players.

One of them, Dorian Thompson-Robinson, plays at least one game every day. The Bruins quarterback wears five motivational wristbands on his arms. One of them, from Makowsky, says: “Player, not a piece.”

Four years ago this weekend, Thompson-Robinson was 18 years old, not quite as wise, and a freshman backup. When Wilton Speight went down with a back injury in the second quarter of UCLA’s opener against Cincinnati, first-year Bruins coach Chip Kelly called in the top-50 recruit from Las Vegas Bishop Gorman, who had not started a game until his senior year of high school and had enrolled at UCLA only a few months earlier.

“I was definitely not ready, and it showed,” said Thompson-Robinson, whose fourth-quarter fumble-turned-safety helped the underdog Bearcats pull away.

Four seasons and 35 career starts later, “DTR” conducted an interview this offseason while watching current Bruins freshman Justyn Martin practice routes with his receivers. Every so often, Martin would look Thompson-Robinson’s way and ask the name of a play or its progression. Thompson-Robinson, now one of the most experienced quarterbacks in the country, reflexively shouted back the answer.

“Obviously,” he said, “I know I’ve been in college for a while.”

So long that he could make history this season after putting off the NFL to use his extra year of eligibility. It’s believed Thompson-Robinson would become the first Power 5 quarterback to start at least five games in five consecutive seasons. (Before 2020, a player burned his redshirt if he played in more than four games. Four-year Baylor starter Charlie Brewer, now at Liberty, started Utah’s first three games last season but lost his job and transferred.)

A story about all of Thompson-Robinson’s career travails along the way might be even longer than his career itself.

Things weren’t much better as a sophomore. UCLA went 4-8; DTR completed just 59.7 percent of his passes for 21 touchdowns and 12 interceptions. Ankle and knee injuries knocked him out of two games and caused him to miss another. Still, Kelly stood by him.

The 6-foot-1, 205-pound dual threat’s first two seasons included numerous flashes of his potential. He racked up a school-record 564 yards of offense (507 passing, 57 rushing) in a wild 67-63 win over Washington State and produced a school-record 431 yards and four TDs against rival USC.

Thompson-Robinson turned the corner as a junior, improving his passer rating from 134.9 to 156.3. UCLA, though, played only seven games in the pandemic-shortened season, and DTR missed two of them. In his highlight performance, he went 30-of-36 for 364 yards and four TDs against the Trojans, but he also threw two costly picks.

With the arrival of transfer from Michigan of running back Zach Charbonnet, Kelly’s offense finally found its Oregon-like rushing attack. Thompson-Robinson once again missed a game to injury but finished the season as the Pac-12’s top-rated passer (153.9 rating), throwing for 2,409 yards, 21 TDs and six INTs and rushing for a career-best 609 yards and nine TDs. In his career performance to date, he shredded USC for 349 passing yards on 16 completions and accounted for six TDs in a 62-33 beatdown.

UCLA finished 8-4, posting its first winning season in six years, though it ended anticlimactically when an 11th-hour COVID-19 outbreak caused the Bruins to cancel their Holiday Bowl matchup with NC State.

Most assumed Thompson-Robinson would enter the NFL Draft. In fact, after consulting with his NFL contacts, Kelly, the former Philadelphia Eagles and San Francisco 49ers coach, advised his four-year quarterback to go. UCLA even recruited an experienced transfer, UCF’s Dillon Gabriel, who committed in mid-December but ultimately flipped to Oklahoma.

“He no question would have been drafted. A lot of people liked him,” Kelly said. “A lot of people used (Baltimore Ravens QB) Tyler Huntley as a comparison for Dorian.

“Selfishly, I wanted him back. But I’m not being fair to him if I’m not giving him the information that people are telling (me).”

Thompson-Robinson took until Jan. 10 to announce his decision.

“To get the NFL, it’s not where you go, it’s about can you get in the door or not?” Thompson-Robinson said. “(Kelly) figured I had a pretty good shot at getting in the door, and that’s all you need is opportunity, and that’s what I was looking for and hoping for.

“But I wasn’t where I wanted to be going into it. I felt like this is the year that I can really put everything together, not just three-fourths of what I’ve got going on. I want to really make this a complete year, really be almost like a rookie quarterback this year. I want my team to be like I’m out there playing with the NFL guy behind me.”

Kelly and his quarterback arrived the same year. Their trajectories heading into their fifth season together are intertwined. After such stratospheric success at Oregon (46-7 in four seasons), Kelly’s slow climb from 3-9 to 8-4 had critics wondering whether the game had passed him by, just as Thompson-Robinson’s early struggles and inconsistency had critics suggesting he was an overhyped recruit.

As the 2022 season kicks off, there’s reason to believe Kelly’s program, stocked with impactful transfers (ex-Duke receiver Jake Bobo looks to be the next star), may finally contend for a Pac-12 championship, just as Thompson-Robinson may finally play like a finished product.

“It’s been it’s been a lot of fun (watching him grow) because he’s so good to work with,” Kelly said of his protégé. “He’s really smart, and he’s really a student of it. Very rarely does he make the same mistake twice, which is awesome to coach.

“He has all the tools to be special, and he is special.”

UCLA quarterbacks coach Ryan Gunderson, who arrived last season, said the goal with Thompson-Robinson this season is simple: “The word has been consistency. I think you saw toward the end of last year, when he was hot, he was very hot. So we need to live in that world as much as we possibly can.”

At this moment, though, the sport’s first five-year starting quarterback holds a modest career record of 17-18.

Thompson-Robinson’s own goal for his final chapter: “Finishing with a ring.”

I’d recommend a nice cheese and onion: meet the ‘sommeliers’ of chocolate, oysters, mustard – and crisps