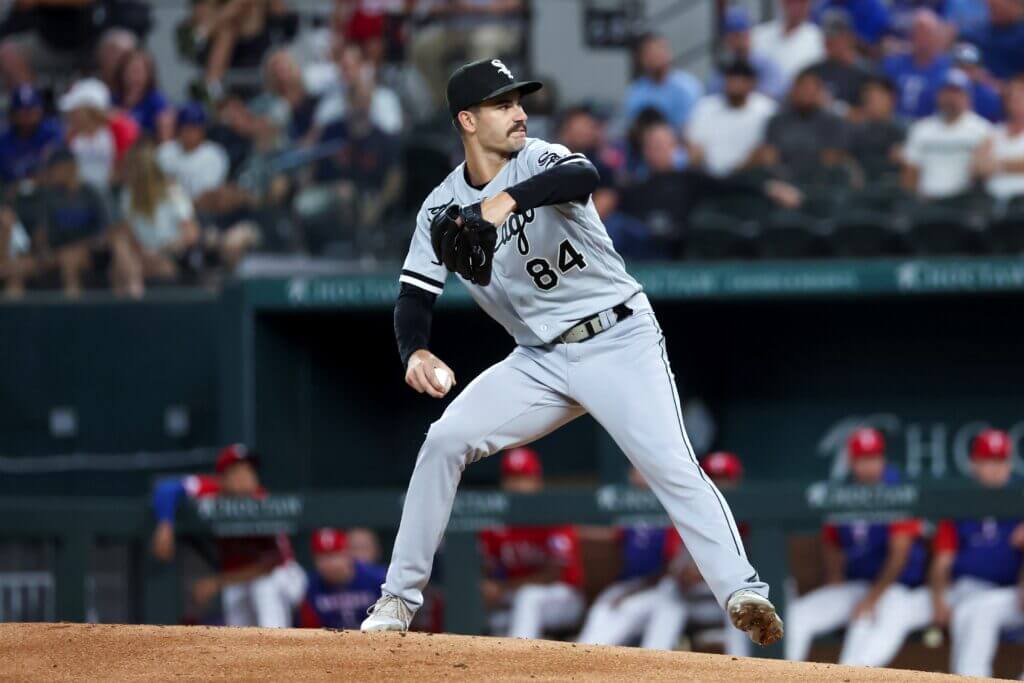 ARLINGTON, Texas — White Sox pitching coach Ethan Katz was walking through the White Sox clubhouse this week with a freshly printed white T-shirt. On the back of it looked to be the much-rumored but formally unreleased poem that Dylan Cease wrote about his slider. Katz didn’t sit still long enough to allow for a full read, and he quipped that his shirt was a single printing just for him, but the poem looked a little repetitive at a glance.

That’s fitting for its subject matter, since no qualified starter in baseball is throwing their slider — or any off-speed pitch — as often as Cease is throwing his slider. His 42 percent usage entering Friday night was spiked by the fact that he started throwing it at a 47 percent clip since his last start of May, which is when he first mentioned that he had “fiddled” with it. The adjustment to hold his slider deeper in his hand was aimed at hammering out some of the cutter-like movement — and has ironically produced a faster, spinnier version that has Cease and Katz exploring the upper limits of how much you should throw an unhittable pitch.

“The league is telling us what’s working right now,” Cease said after a recent start.

No truer words have been spoken. Cease has allowed five earned runs in 76 innings since that start at the end of May, across 13 outings that have not seen him allow so much as two earned runs in a game. That last part is a modern-day record. He’s also won American League pitcher of the month for the past two months.

“It’s definitely the best I’ve ever pitched in my life,” Cease said. “I’m happy about it. I’m happy to be giving us a chance. Hope to keep it going.”

Trying to harness breaking balls at this rate has not been a magic fix for Cease’s league-leading walk rate (11.1 percent since May 29). But the outsized nature of his success is a strong testament to the sustainability of the plan. Even with the walks, opposing hitters have reached base at only a .269 clip during this stretch. Rarely giving up hits is a good way to control traffic on the bases, too.

There are a lot of nasty breaking balls out there in MLB with very low batting averages against them. Sox closer Liam Hendriks, for example, entered Friday night with opposing hitters batting .129 against his slider, which similarly can touch 90 mph like Cease’s bender. But Hendriks also throws it almost exclusively as a chase pitch, in chase counts, and tries to never place it in the strike zone. He, like most other pitchers wielding nasty, wipeout breaking balls, has to set up situations to use it with his fastball. The volume and variety of locations Cease can survive and thrive in with his slider lack any real comparison. And it’s hard for anyone to claim theirs is better without making similar demands of their pitch. It’s a copycat league, but right now, no one is.

“I mean it’s a 90 mph curve,” Hendriks said of Cease’s pitch. “The movement on it is extreme. But to be honest, the percentage of times he uses it effectively is mind-boggling. I feel like if I throw five sliders, three of them are bad and two of them are decent. But he’s able to throw five sliders, and it’s four good ones and one that’s mediocre that is still better than my good ones. That’s something that is really hard to replicate: being able to go out there and throw that many successful ones.

“The break, the movement, the spin that he’s getting on it, he can throw it middle-middle and it’s still effective because of the fact that they have to be ready for 98 mph fastballs at the top of the zone, 80 mph curveballs. They have to be ready for anything he throws. and he throws everything somewhat near the zone for the most part. It’s impressive that he gets so many swings-and-misses on breaking balls inside the zone, which there are few guys in the league who can do that.”

In spinning six more innings of one-run baseball Friday night in Texas, Cease made a meager night for the White Sox offense stand up in a 2-1 victory, decided by former fellow Cubs prospect Eloy Jiménez’s fourth-inning home run. Despite largely lacking the consistency to go on a sustained run, the Sox are 11-2 in Cease’s last 13 starts. He slightly knocked his slider percentage down by throwing only 39 of them over 91 pitches, but it was still more than he offered his fastball and was only because he worked through some mechanical kinks in his first two innings.

“Today, unfortunately, no, but usually, yes,” Cease said regarding whether he feels just as comfortable landing his slider as locating his fastball.

But the other adage about throwing this many sliders, beyond being difficult to locate or diminishing returns against hitters, is that it was supposed to be bad for pitcher health. Cease had Tommy John surgery before he was drafted out of high school, has not had any arm issues since some shoulder stiffness at the end of 2017 and professes to feel great as he heads into the stretch run.

As Katz would point out, simply the upper-90s fastball velocity Cease works at is thought to correlate with arm injuries as much as anything else he’s doing. And Katz feels he’s combatting a different source of stress in his pitchers’ arm: long, inefficient innings where he can’t put opposing hitters away. The quicker Cease can get off the field with his best stuff, the White Sox figure, the better off he’ll be.

“You’ve got to get outs; hitters aren’t able to adjust and we’re going to ride with what works,” said Katz. “I try not to think that way. I try to coach within what’s working and where our pitchers’ strengths are. And if it calls for three straight sliders because the hitter hasn’t made any sort of adjustment, we’re not going to deviate just to help the hitter.”

And Friday night — as much as it was not a peak Cease outing, with just five strikeouts in six innings (ho-hum) — was an example of some efficiency with his back against the wall. After running up 45 pitches in the first two innings, Cease used just 46 over the final four, tweaking his mechanics on the fly and trusting his stuff to be too good to be hurt in the strike zone. It’s worked for a while.

“We saw a different side of Dylan Cease,” Tony La Russa said. “I think he had (45) pitches after two innings, and he ended up pitching through the sixth. (The) young man continues to impress, amaze. (He) works so hard and he just settled down, and that was another side that we haven’t seen where he can get that deep in a game when he started off having so many issues.”

It’s another side of a pitcher who, amid a vital run for his struggling team, looks like the best pitcher in the league. Or at least the best one not named Justin Verlander. He’ll concede that much.

“I try not to think too far ahead like that,” Cease said of the Cy Young Award. “But I think I’m probably putting myself at least in the running.”

What is the wingspan of a bald eagle, and what is a shadow? Try our kids’ quiz