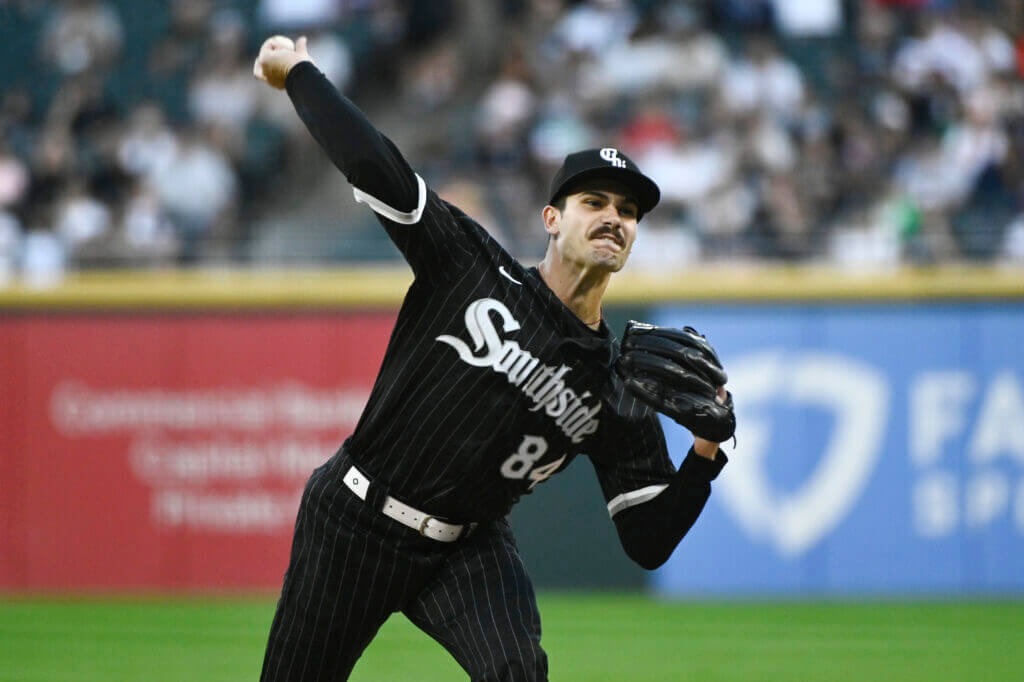 CHICAGO — Johnny Cueto is not Dylan Cease’s rival, but his rotation mate, and Cueto’s dutiful innings-eating enables the White Sox to manage Cease’s breakout the way they would like. But Cueto’s brand of success has shown where Cease can still grow, amid a 2022 season that has otherwise gone about as good as anyone could have hoped. Other than Cueto’s elite command and more than a decade of major league experience, his ability to unfurl different looks at lineups deep into games and adjust quickly enough to transform erratic beginnings into valuable outings, is something worth aspiring to, even for a 26-year-old who is simply striking out the world with an unhittable pitch.

Through six innings of a much-hyped showdown of American League Cy Young contenders Tuesday night, Justin Verlander was delivering a far ruder demonstration. Verlander’s strikeout-avoidant, disciplined-to-the-point-of-suspicion Astros teammates had spoiled so many Cease sliders, drawn three walks, ended his streak of one earned run or less, and driven the young right-hander out after five innings. But in efficiently protecting a 3-1 lead, Verlander was giving a lesson of dominance without Cease’s 32.3 percent strikeout rate, holding a White Sox lineup that can make contact but struggles to draw walks and mash extra-base hits, without a single walk or extra-base hit.

Then the White Sox demonstrated, even with the bottom of their order, why allowing starters to complete three turns through a lineup is such a carefully considered thing. Josh Harrison drilled a one-out single that could have been more. Seby Zavala worked a full-count walk. And even as Verlander started emptying the tank, Gavin Sheets tracked the trajectory of the backfoot sliders he got before ripping a failed effort for a pinch-hit, two-run, game-tying double.

An inning later, Yoán Moncada dropped a two-out, go-ahead RBI single into center off Hector Neris to continue his attempt to redeem a down season with runners in scoring position (.296/.370/.535), and Liam Hendriks recorded his fourth save in five days. In a season where Cease’s individual breakout has been dragging up a disappointing whole, he could not find much time to lament a role reversal in a 4-3 comeback victory. A team that was supposed to contend — winning five straight to get back within a game of a playoff spot — is the main story again.

“There’s no denying there was a lot of big implications, but at the end of the day, it felt like an intense game,” said Cease, who has seen 12 of his last 15 starts end in Sox victories. “It’s really no better feeling than seeing clutch baseball, two outs, go-ahead runs. You can’t really beat that.”

“He wasn’t sharp but if he doesn’t compete like he did and hold it at two and three runs, the comeback is not possible against Verlander,” manager Tony La Russa said. “I’ll remember this one when I think about him a long time.”

Because of the baseball schedule’s agnosticism about intentionally engineering marquee matchups, legitimate late-season showdowns between Cy Young contenders are rare and to be celebrated. Rarer is the showdown between an emerging young ace and someone who has been the model for right-handers seeking to maximize their power stuff for the last decade. That includes Cease, who will watch Verlander video to prepare for how to attack similar teams. And it’s hard to say Cease is out of Cy Young contention when he’s clearly been the second-best performing American League starter all season, but he entered the night behind Verlander in the race and did not get closer.

For one, there’s a notoriety gap considering that Verlander is a two-time Cy Young winner and former MVP pitching for the best team in the American League, whereas Cease was left off the All-Star team. Despite two fewer starts, Verlander is now ahead of Cease in innings (143 to 133 2/3). And while BBWAA voters have not seemed to care as much about innings in recent years in handing awards to Blake Snell and Corbin Burnes with outstanding run prevention in lower inning counts, Verlander’s ERA lead widened slightly (1.95 to 2.09).

“It wasn’t my sharpest outing, but it was close enough to keep us in it and then everyone else picked me up,” Cease assessed after being held to four strikeouts in 23 batters faced. “The biggest thing is just getting it in the zone, especially early. There was a lot of uncompetitive sliders in the dirt. I think the biggest thing is being on the attack and getting the count leverage where they have to sort of expand.”

Much of Cease’s brilliance this season lies in how much his electric stuff allows him to twirl his off-speed arsenal in the strike zone and still get swings-and-misses when executed to the right quadrants. But lacking that precision, the second-most strikeout avoidant offense in the American League (Cease will face the AL leader this weekend) spit on chase pitches and fouled off others until Cease ran out of strikes. Three Astro walks spiked Cease’s league-leading walk rate (among qualified starters) to 10.5 percent, and the two they drew to lead off a two-run third inning flipped the direction of the game until Sheets flipped it back.

Also flipping the direction of the game was a two-out RBI double from Alex Bregman glancing off Andrew Vaughn’s glove, rather than sealing an improbable third-inning escape that began with a strikeout of Yordan Álvarez. The White Sox defense has struggled this year, and Vaughn being tasked with an even more challenging defensive position than when he converted from first base last year has been a part of that. Cease has largely transcended by avoiding that defense entirely, and posting the second-best strikeout rate in the sport. With that rate halved by the Astros employing something like a two-strike approach all night —providing a preview of how his success could be approached down the stretch — Cease’s ability to work through his typical supply of free baserunners and get outs via contact was tested in front of a defense missing Luis Robert and Tim Anderson. Also, allowing drives to the wall tends to carry some risk.

“Just in general, I think they’re a very disciplined team,” Cease said. “They make you throw in the zone and unfortunately I was a little sporadic that inning.”

It’s not easy to find examples of pitchers leading the league in walks and earning significant hardware. But unlike when it was a millstone around Nolan Ryan’s neck, Cease is operating at a time when there’s relative agnosticism about where his baserunners come from. It’s just that his long battles mean his pitch count is keeping him from going deeper into games than his opposition ever could. What little hard contact he’s allowing or defensive shortcomings he has to work through are worsened by how he reduces his margin for error. This year seems like the first of many seasons in which Cease will earn Cy Young votes, but it’s also hard to imagine a starter with a walk rate over 10 percent getting much closer.

But Cease’s ceiling lies in living truer to his stated approach, where his stuff doesn’t need out-of-zone chases to thrive against elite offenses like the Astros that don’t offer out-of-zone chases readily. For a Sox staff that was confounded last October by the Astros’ unwillingness to offer at the strike-to-ball pitches the rest of the league whiffed on all last year, Cease could serve as an antidote down the road. Right now, it’s simply his biggest challenge in taking the next step in his game, which isn’t so much the Cy Young as it is Cleveland on Sunday.