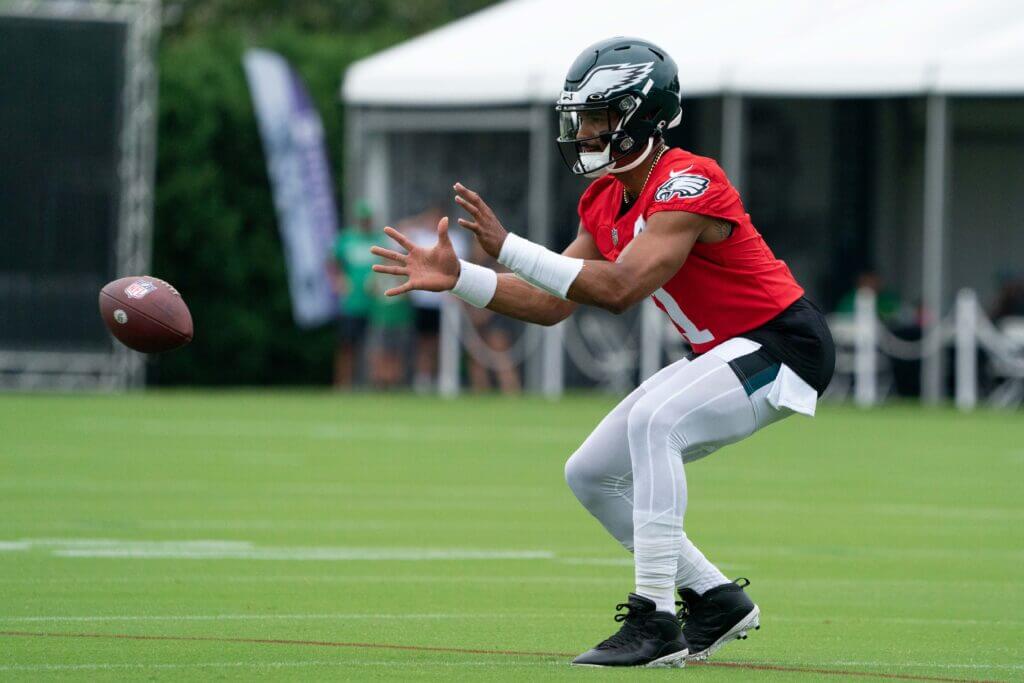 The Eagles returned to practice after a day off on Friday. It was their seventh full practice of the summer. Here’s a running diary:

10:00 a.m. — The Eagles are stretching for a full-padded practice, and there’s a new injury: running back Boston Scott is out with a concussion, which he suffered during a collision on Thursday. Scott is now the third player sidelined with a concussion, joining Jordan Mailata and Andre Dillard. Both Mailata and Dillard attended practice on Saturday, which is evidence they’re making progress in the league-mandated concussion protocol.

DeVonta Smith is still out with a groin injury. He’s watching practice, which should indicate it’s not a serious injury. Grant Calcaterra (hamstring) and Greg Ward (toe) are also out. Cornerback Mac McCain III will practice on a limited basis.

There are no limitations for Zach Pascal for the first time this summer. Pascal was ill with food poisoning last week. He returned on Thursday on a limited basis while the team eases him back, but Pascal still must regain strength. He lost 16 pounds — yes, you read that correctly, 16 pounds — and spent time in the hospital. The culprit was a chicken quesadilla.

Kyzir White shows up with two plays early, including sniffing out a pass to Miles Sanders and breaking up a pass to Dallas Goedert. Linebacker play is better evaluated when tackling is involved, but it’s been clear through the first week that White can cover.

Marlon Tuipulotu, who is making strides as a reserve defensive tackle after an injury-marred rookie campaign, pushes into the backfield and would have been credited for a clean-up sack on a play when the pocket collapsed.

10:25 a.m. — Nakobe Dean mixes in with the first-team defense. He’s played with the top group before, but Dean appeared to take more snaps with the starters on Saturday. The Eagles have seen good performances from T.J. Edwards and White, so playing time won’t be gifted to Dean. But his talent and upside might be too much for the Eagles to keep off the field by the end of the season. Dean and White were with the starters in this series.

10:27 a.m. — Hurts just had perhaps his best throw of the day. He placed a tight-window deep ball to A.J. Brown in the corner of the end zone, with Darius Slay sticking to Brown. Hurts’ ball placement was what the Eagles need from the quarterback, and it’s the type of high-level throw that could be a difference on Sundays. However, the pass felt incomplete.

It appeared from my vantage point (on the opposite sideline) that Brown might have bobbled the ball, but those on the other side (including The Athletic’s Bo Wulf) say Slay knocked it away. We’ll go with that version; they had a better view of the play.

10:37 a.m. — First-team offense is back, and this sequence includes two big gains for the offense.

The first was a connection between Hurts and Dallas Goedert, who was wide open up the seam. In a game, perhaps a defender eventually catches him. In practice, it was a potential touchdown.

Here’s how Goedert described the play after practice: “It was just all vertical, running back had a little option route up the middle. They did a … check, so the safety went down to the back, and I was able to go up the seam. (Marcus) Epps came over and said he would have smacked me. I said it would have hurt him a lot more than it hurt me! It was Jalen going through his progression and getting to where he needs to be and … that would have been a big one.”

The second big gain was a slant to Brown, who beat Kary Vincent Jr. and caught the pass in stride with space in front of him to run. This is where Brown is most dangerous — the slants where he can display his run-after-the-catch ability. It might sound like hyperbole, but this is the closest the Eagles have had to a Terrell Owens-type receiver since that magical 2004 season. They’ve had other productive receivers since (DeSean Jackson, Jeremy Maclin, Alshon Jeffery, Kevin Curtis, Jordan Matthews, to name a few), but the way Brown is built and how he runs in the open field are rare.

If you’re worried about Hurts’ ineffective use of the middle of the field last summer, this practice should give you optimism. Brown and Goedert could both do damage in that area.

10:44 a.m. — A good practice for undrafted rookie Britain Covey, who snuck in first-team reps at slot receiver and pulled down catches with the second-team offense. If Covey excels as a punt returner during preseason games, he’ll be in the mix for one of the final roster spots at wide receiver. Covey lacks size and he’s already 25, but he was productive at Utah and he’s getting open this summer.

10:45 a.m. — The Eagles are split between seven on-sevens and one-on-ones for the offensive line and defensive line. I stand in between to try to monitor both.

• An outstanding rep by Jordan Davis against Cam Jurgens, with the first-rounder pushing the second-rounder deep into the backfield. Noted one-on-one connoisseur Bo Wulf pointed out that Jurgens has held up decently against Davis this summer, which is a challenge in one-on-ones. Davis did what you would expect on this rep.

• Brandon Graham makes this drill miserable for Jack Driscoll. The veteran easily beat the third-year lineman and even went up to offer his support and give Driscoll a backslap and hug a few moments later. The Eagles like Driscoll for good reason, but Driscoll is probably happy that he won’t need to block Graham in games.

• Credit to Lane Johnson for holding up against Haason Reddick, who couldn’t beat Johnson around the edge. Johnson has been stellar this summer. I consider him the best overall player on the team.

I miss it while watching the one-on-ones, but apparently Slay kept stride with Quez Watkins downfield in seven-on–sevens and plucked an interception off Hurts.

10:57 a.m. — An 11-on-11 period begins with a fumble. Hurts hands the ball off to Miles Sanders, but there appears to be a problem at the mesh point and the ball fell to the ground. There were a few read options sprinkled into practice.

A few plays later, Hurts tried hitting Jalen Reagor along the sideline. Josh Jobe was tight in coverage and Reagor’s helmet ended up on the ground. (So did the ball.) Not sure how his helmet came off. There was no flag on the field. The Eagles coaches called for Reagor to rush back to the line so the offense could stay in no-huddle.

11:02 a.m. — For a split second, it appears James Bradberry has a nice pass breakup when he jumps in front of a Gardner Minshew pass intended for Deon Cain. Instead, Cain catches the deflection and it’s a completion. Two points here:

• Bradberry is one of the players I’m most impressed with this summer. He made these sessions difficult for DeVonta Smith before Smith’s injury and has been active getting his hands on pass attempts, as he did on this play. The Giants’ cap problems could turn into a gift for the Eagles. The early returns on the Slay-Bradberry duo are favorable.

• Cain is a down-the-depth chart wide receiver who’s been in my notes this summer. Nick Sirianni liked him in Indianapolis. He’s flashed a few times during camp.

Also in this period, Derek Barnett registers a “sack” on Minshew. The defense continued to pile up would-be sacks. Tarron Jackson also had one on Saturday.

11:10 a.m. — For your Sirianni wardrobe update: He’s wearing a kelly green Quez Watkins T-shirt and a Dick Vermeil cap. The cap was honoring Vermeil on the day the former Eagles coach entered the Pro Football Hall of Fame. The Watkins shirt continued an initiative to wear player-branded shirts. As promising as Watkins might be, I wonder if there’s a robust market for Watkins attire.

• A nice pass breakup by Jobe, an undrafted rookie at Alabama who started 26 games for the Crimson Tide. Jobe has 32 5/8-inch arms, and the length showed on this PBU.

• Third-year running back Jason Huntley drew praise from the sideline with a juke and a stiff arm to finish a run. The Eagles are undermanned at running back — especially with Scott’s injury — and Huntley showed juice during this series.

11:27 a.m. — Practice is finished. The offense’s high-water marks should be encouraging, but the group still lacks consistency. It will help when they get Mailata (or even Dillard) and Smith back on the field. The Eagles will practice at Lincoln Financial Field on Sunday night for their only public practice of the summer.