The EFL have confirmed to The Athletic that they will review referee Josh Smith’s match report before deciding whether to follow up on the medical incident that caused a stoppage during Watford’s 1-0 win over Sheffield United at Vicarage Road on Monday evening.

Around the 70th minute, Sheffield United fan Shanel Crampton collapsed in the Vicarage Road End — which led to fellow supporters alerting medical staff in the vicinity to the issue. However, it took a significant number of minutes for match officials to become aware.

As agitated fans gestured for stewards, police and St John Ambulance staff to attend the scene, two supporters ran onto the pitch while play continued, in front of the Sir Elton John stand. They attempted to get the attention of an onlooking steward. Both fans, one home and one away, were initially ejected from the playing area and stands by stewards before later returning after discussions. The game was eventually stopped for a short period around the 73rd minute.

“From my point of view it appeared like there was a commotion because there wasn’t that attention getting there quick,” Sheffield United manager Paul Heckingbottom told The Athletic. “You do become concerned because you know there is someone in trouble there, so it’s only right that we did stop the game because your focus is certainly not there when you know there’s something serious going on.”

“I kept saying to my mum: ‘She’s going, she’s going’,” Shanel’s mum Kellie told The Sheffield Star. “You could see her eyes were going. Fans were shouting, ‘She’s dead’ because she wasn’t responding.

“If I’d seen a stranger like that, I’d have probably felt the same. What upset us most was how slow people were to react. We can’t thank the fans enough, of both clubs.”

Crampton was treated by medical staff and taken to hospital by ambulance. The Watford General Hospital is next door to Vicarage Road.

A statement from Sheffield United said: “The young Blade who needed medical attention at Monday night’s Sky Bet Championship fixture with Watford is on the mend.

“Shanel Crampton was discharged from Watford General Hospital on Tuesday morning and is returning to Sheffield to continue her recovery.

“The game was stopped temporarily as Shanel received medical attention for a pre-existing condition and was later transferred to hospital, where she remained overnight.

“Shanel’s grandmother, Tracy, contacted the club on Tuesday morning to give an update on her daughter’s condition and also to thank everyone who assisted, including numerous Blades fans in the away section at Vicarage Road.”

The East of England ambulance service added on Wednesday that: “There were a number of medical incidents at Watford Football Club’s grounds on August 1.

Towards the end of the match, St John Ambulance alerted our own paramedics, who were on-site in the first aid room, to an incident where a female had become unwell.

Once our crew assessed the patient, we were able to have an ambulance on-scene in just over nine minutes, and she was transported to Watford General Hospital for further assessment and care.”

On Thursday, Watford said in a statement: “Among a number of other medical incidents which took place inside Vicarage Road Stadium before and during Monday August 1’s match, a female Sheffield United supporter was treated during the second-half of the game.

“The supporter affected has a pre-existing medical condition, which requires specific medical intervention.

“Stewards alerted St John Ambulance staff to a female supporter feeling unwell during the second-half, so first response medical services were at the scene within two minutes of being called. At this point, the patient was sitting up and conversing with staff.

“Safety and security staff attended in the minutes after, given other supporters’ concern and attempts to alert further attention. These minutes included two supporters reaching the pitch perimeter astroturf – one from the home section and one from the away section – in order to raise awareness. The club is satisfied neither of these supporters was attempting a pitch incursion and were simply trying to help.

“Paramedics were called and attended as the patient’s condition regressed rapidly, while other support medical staff liaised directly with East of England Ambulance service, working to advise appropriate care given the very specific nature of the condition.

“After just over nine minutes had elapsed, an ambulance was on site to transport the patient to nearby Watford General Hospital, under the guidance of the Crowd Doctor who was continuing to stabilise the patient.”

The EFL advised The Athletic that the referee’s first port of call before deciding whether to suspend the game is by consulting with the stadium safety officer via the fourth official. Not all medical emergencies require the game to stop. However, it has been acknowledged that due to a spate of incidents last season in the stands there is heightened awareness, especially during the COVID-19 pandemic and after a number of players have collapsed on the pitch. Christian Eriksen did so while playing for Denmark during Euro 2020. Last season, during the game between Watford and Chelsea on December 1, action was halted for 32 minutes after one fan suffered a cardiac arrest. 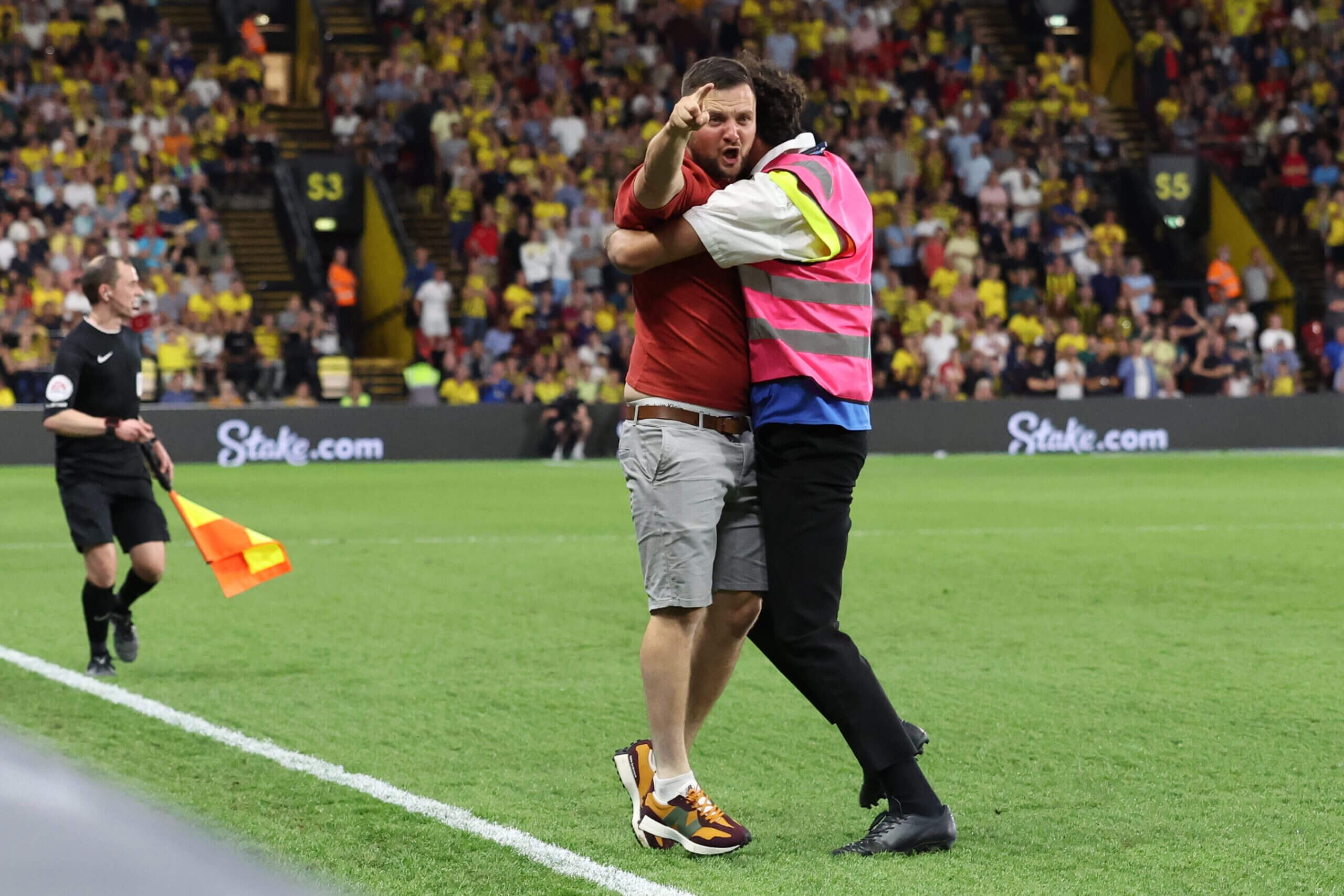 Fans were escorted from the pitch as they tried to tell people about the medical emergency (Photo: Getty Images)

On that occasion at Vicarage Road, much like during the game against Sheffield United, fans urged those on the pitch to stop playing. The only difference appears to be that officials became aware of the issue far quicker in the previous incident. The EFL advise that two medical teams are present at all games, one to cater for the players and officials and one to tend to ill and injured spectators.

In previous incidents, medical staff from respective teams have gone to the aid of those in the stands. However, it has been highlighted by the league that there is no expectation placed on club doctors to attend a crowd-based emergency unless at a specific request comes from the crowd medical team or stadium safety officer.

“If a supporter becomes unwell at an EFL Club’s stadium and requires medical assistance, then we strongly advise that the nearest steward is made aware, who will ensure that the crowd medical team is notified and that appropriate care is provided,” explained an EFL statement last season.

“This is in line with the briefing note produced by National Events Medicine Advisory Group (NEMAG) in conjunction with the Sports Grounds Safety Authority’s (SGSA) and football authorities.”

Other considerations come into play when deciding whether, or for how long, to suspend play. The EFL advise that delays can increase the risk of muscular-skeletal injury to players, and fans due to unexpected crowd movements in stairwells and concourses. Suspending evening games for significant periods also can have implications for crowds leaving the stadium and for onward public transport journeys.

“For spectators, it’s important to emphasise that whilst individuals may be ill or injured, medical teams are there for all spectators inside the stadium. If you have a stoppage in a crowd of 50,000, we might be treating one patient but we’re also responsible for the other 49,999,” Dr Joe Cosgrove, a major sports crowd doctor explains to The Athletic.

“I understand perfectly that peoples’ initial feelings that this view sounds callous but there’s good reason for it. Safety officers will be in match control with excellent CCTV and will have a very good handle on what is happening at the incident.

“They should be working with match commanders with skills from all three emergency services. Any direction to stop the game should come via consultation with the safety officer, rather than from the field of play.”

Cosgrove helped to save the life of 80-year-old Newcastle fan Alan Smith at last season’s match between Newcastle and Tottenham during which players including Sergio Reguilon came in direct contact with fans before alerting match officials. Eric Dier also signalled to medical staff by the dug-outs to provide a defibrillator.

“That may have developed a mindset and perceived responsibility among players and match officials that they need to stop the game because of what happened at Newcastle,” says Cosgrove. “I do know that Tottenham players were very aware and concerned about what had happened to Christian Eriksen during the Euros. I suspect that this may have had an influence on what happened that evening.

“It’s very understandable. He was a former team-mate and if you consider what happened to Charlie Wyke (the Wigan Athletic striker who collapsed in November), professional footballers may feel both exposed to and responsible for dealing with cardiac arrests. This in turn may have led to match officials feeling additionally responsible for such events and feeling that something should be done.

“The message we’re all trying to get across is to reassure players and match officials that there are teams in the crowd there to deal with emergencies and that they don’t have to feel pressurised to stop the game.”

The Football Safety Officers Association met in March to discuss the trends, while the Sports Grounds Safety Authority (SGSA) is understood to be working with Professional Game Match Officials Board (PGMOL) to improve awareness of the best practices.

Russian airbase on western coast of Crimea damaged in explosions