The Liverpool midfielder is facing another spell on the sidelines after scans confirmed he suffered a hamstring strain in Saturday’s 2-2 draw at Fulham.

Thiago is expected to be out of action for up to six weeks, although club staff retain hope he could return before mid-September if he responds well to treatment.

Losing a player of Thiago’s quality is a major blow for Jurgen Klopp, who had already seen his midfield department depleted by injuries to Alex Oxlade-Chamberlain and Curtis Jones.

Calf, hip, thigh and Achilles problems — coupled with a bout of COVID-19 — limited his involvement in 2021-22. He missed the Carabao Cup final after being hurt in the warm-up and needed a painkilling injection prior to the Champions League final in Paris.

Klopp must now trigger a response to an error-strewn opening day performance in the capital without the experienced Spain international as the focus turns to next Monday’s visit of Crystal Palace.

There’s a growing clamour among sections of the fanbase for Liverpool to dip into the transfer market to ease their problems in the engine room. However, so far there’s no sign of the club’s stance changing on that front, with the manager adamant they won’t “panic”.

So how best to fill the Thiago void? The Athletic runs the rule over the possible solutions…..

Darwin Nunez was rightly lauded for his dynamic display off the bench at Craven Cottage as he gave Liverpool the kind of attacking threat they had previously lacked. The Uruguayan striker, who looks destined to make his first Premier League start against Palace, helped himself to a goal and an assist.

However, Harvey Elliott’s impact as a substitute after Thiago limped off was also highly impressive. It was his pass that sent Mohamed Salah scampering away to deliver the cross for Nunez to convert.

The 19-year-old completed 17 of his 20 passes (85 per cent) and gained possession on four occasions. Elliott was one of the standout performers during pre-season after cutting short his time off this summer in order to ensure he was in the best possible shape.

He’s well versed in what Klopp wants both offensively and defensively from his right-sided midfielder. A year ago he was picked ahead of both Thiago and Naby Keita to start there against Chelsea. 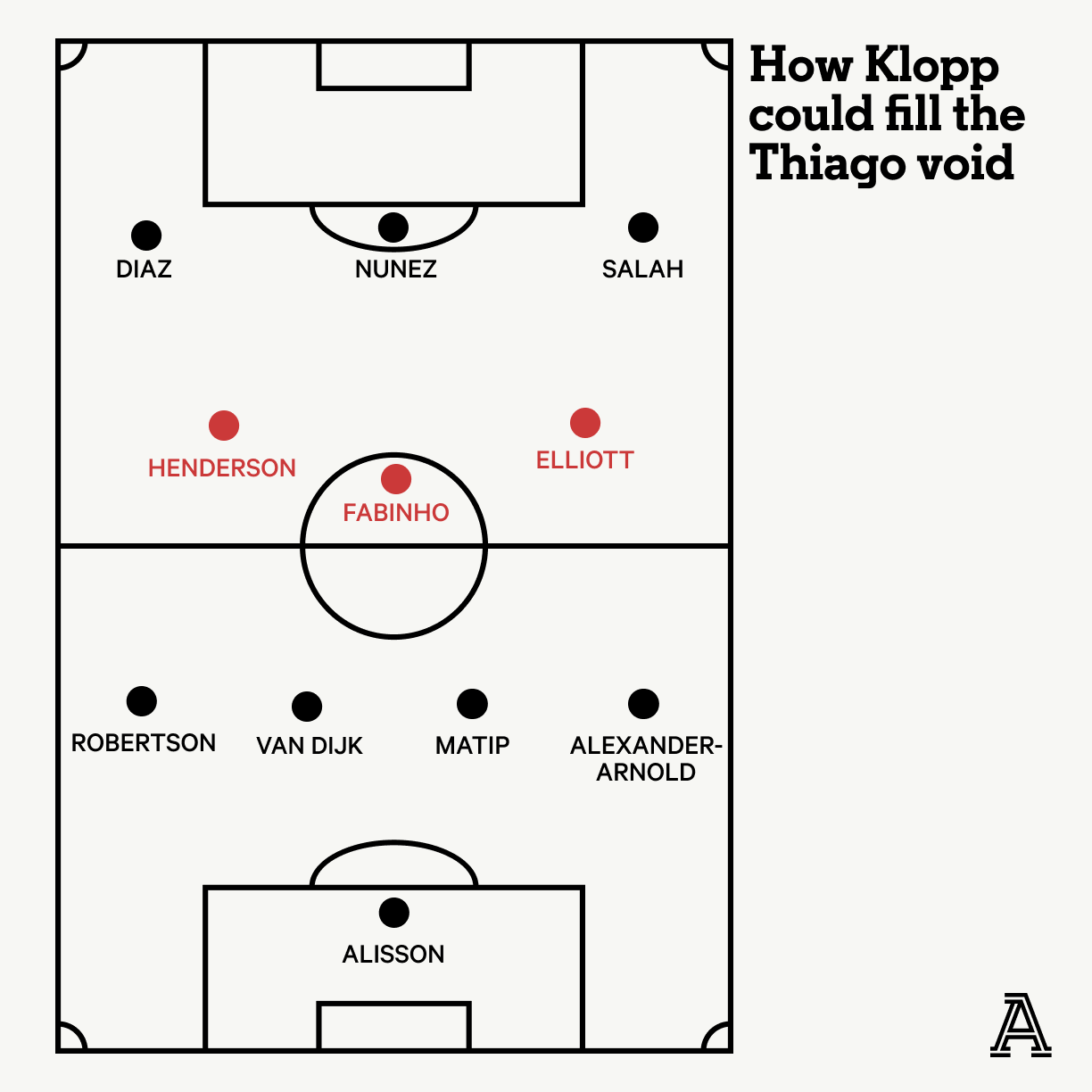 His relationship with Salah and Trent Alexander-Arnold down that flank was blossoming before a serious ankle injury suffered at Elland Road last September derailed his season.

“I’m enjoying my football again,” he told The Athletic recently. “I feel good. It’s down to me to prove to the manager that I deserve the opportunity to start games this season.” Saturday’s cameo was a decent audition.

The Guinea international has recovered from the illness that kept him out for a week and forced him to miss the trip to Fulham. His return to the fold is timely given Thiago’s absence and the current shortage of numbers in midfield.

Keita certainly has a point to prove having entered the final year of his contract with an extension yet to be agreed. An array of fitness issues have limited him to just 21 Premier League starts over the past two seasons combined.

The 27-year-old could start on the left of a midfield three if Klopp decides to retain Jordan Henderson on the right and Fabinho in the holding role.

Both Henderson and Fabinho struggled against Fulham. Henderson was the only starting midfielder to finish the game. “We looked a little bit lethargic at times,” he admitted. “We didn’t play the way we normally do. There’s a lot to work on.”

The skipper, who almost grabbed a dramatic late winner when his dipping strike hit the bar, was moved to the left side when Elliott replaced Thiago and then played as the No 6 after James Milner came on for Fabinho. 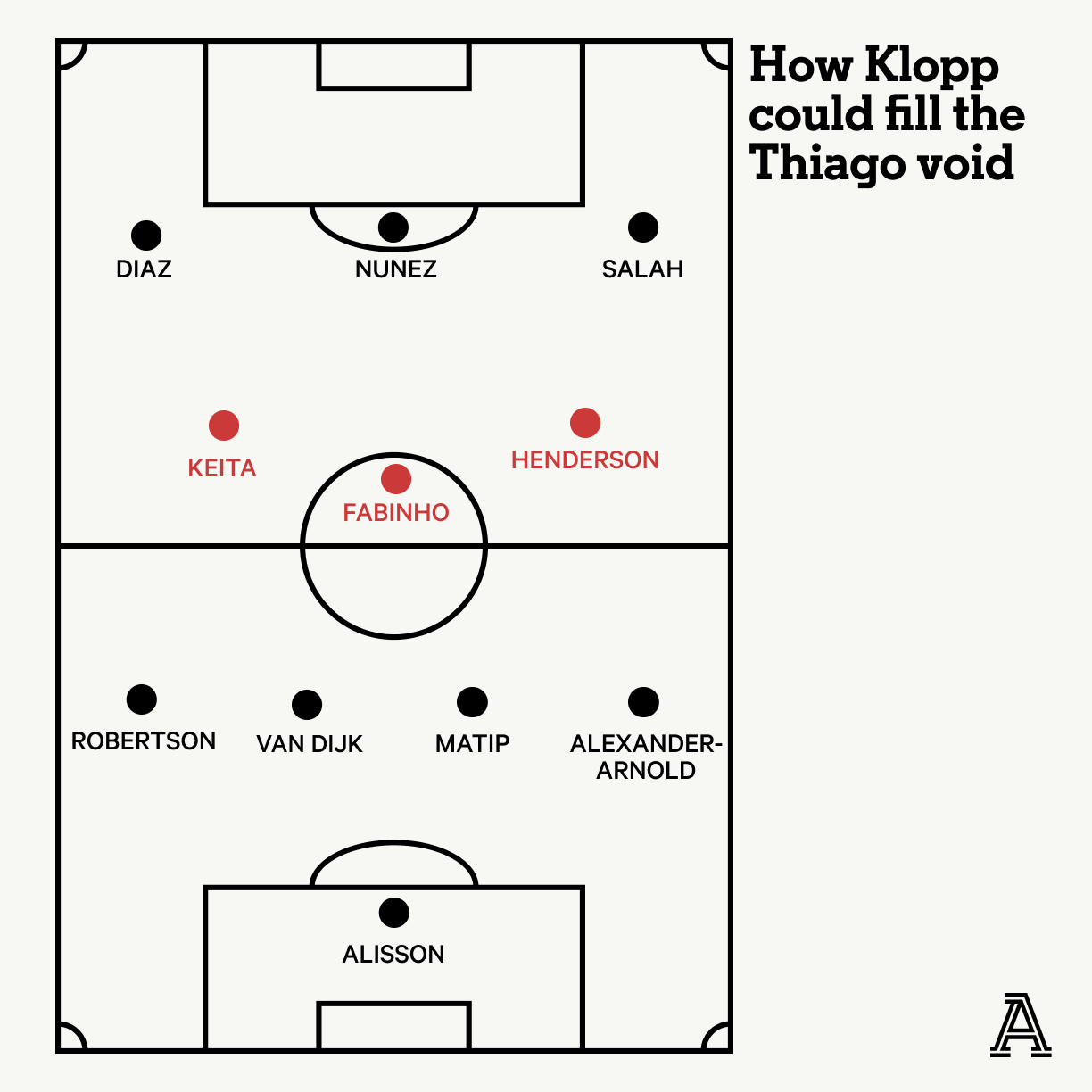 The extent of Keita’s involvement against Palace will depend largely on how he performs on the training field this week. When fully fit and operating at his best he gives Liverpool’s midfield a much-needed injection of creativity.

However, he’s been short of game time recently. He played just five minutes in the Community Shield triumph over Manchester City. By the time the Palace game comes around, it will be nearly three weeks since he got 45 minutes under his belt in the friendly against Salzburg. Klopp may decide he’s best used off the bench.

Some questioned the wisdom of Liverpool giving the best free transfer in the club’s history a new one-year contract in the summer but the 36-year-old’s enduring value was clear for all to see at Craven Cottage.

It was a bold move by Klopp taking Fabinho off with half an hour left but it worked. Until that point, Liverpool’s midfield had been comprehensively outfought. Not with Milner out there. Suddenly, they were playing on the front foot. He drove them forward.

Despite his age, Milner remains a machine physically. He featured in 39 games in all competitions in 2021-22 (25 as a substitute) and he wasn’t retained just because he’s the perfect role model for the next generation. 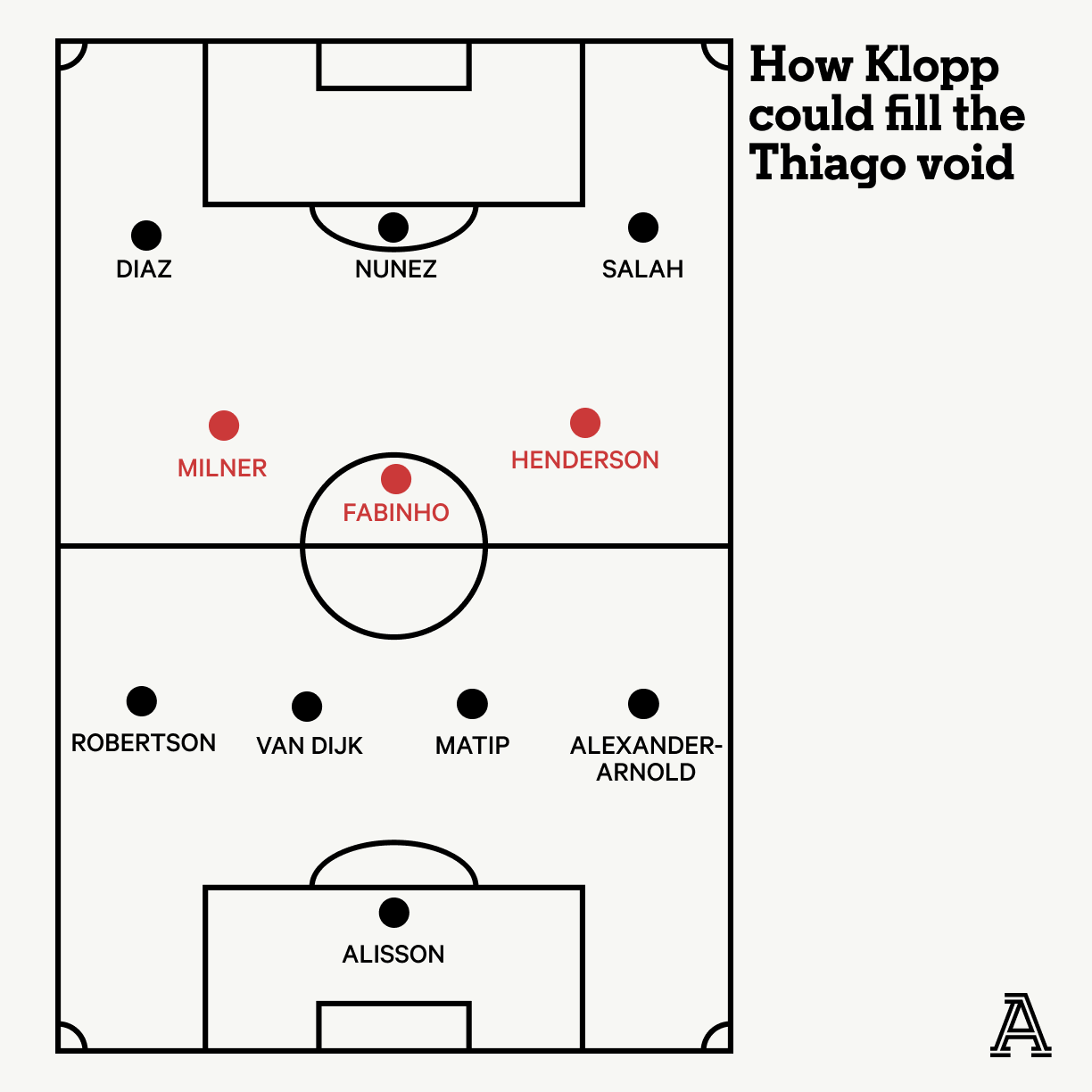 “A lot is often made of James’ leadership skills and his influence in the dressing room, and of course, that’s correct and justified, but nobody should overlook his quality on the pitch, where he continues to perform to a level that meant we simply couldn’t afford to lose him,” says Klopp.

Milner will certainly be important during Thiago’s absence but a starting midfield three of him, Fabinho and Henderson would surely be too defensive against Palace at Anfield.

One of the attractions of signing a more traditional No 9 in Nunez this summer was that it would give Liverpool greater tactical flexibility. Klopp would have more leeway to deviate from his favoured 4-3-3 system at times. The manager spoke about how he wants to keep opponents guessing in terms of both personnel and set-up.

“We have a settled formation if you want and everyone knows how it is, but now we have some real options to change the dynamics on the pitch. That will make us completely difficult to analyse,” he said prior to the pre-season tour of Asia.

Given the shortage of available midfielders, the time maybe right to use a formation that only needs two rather than three of them, especially at home against teams who are unlikely to show much ambition going forward. 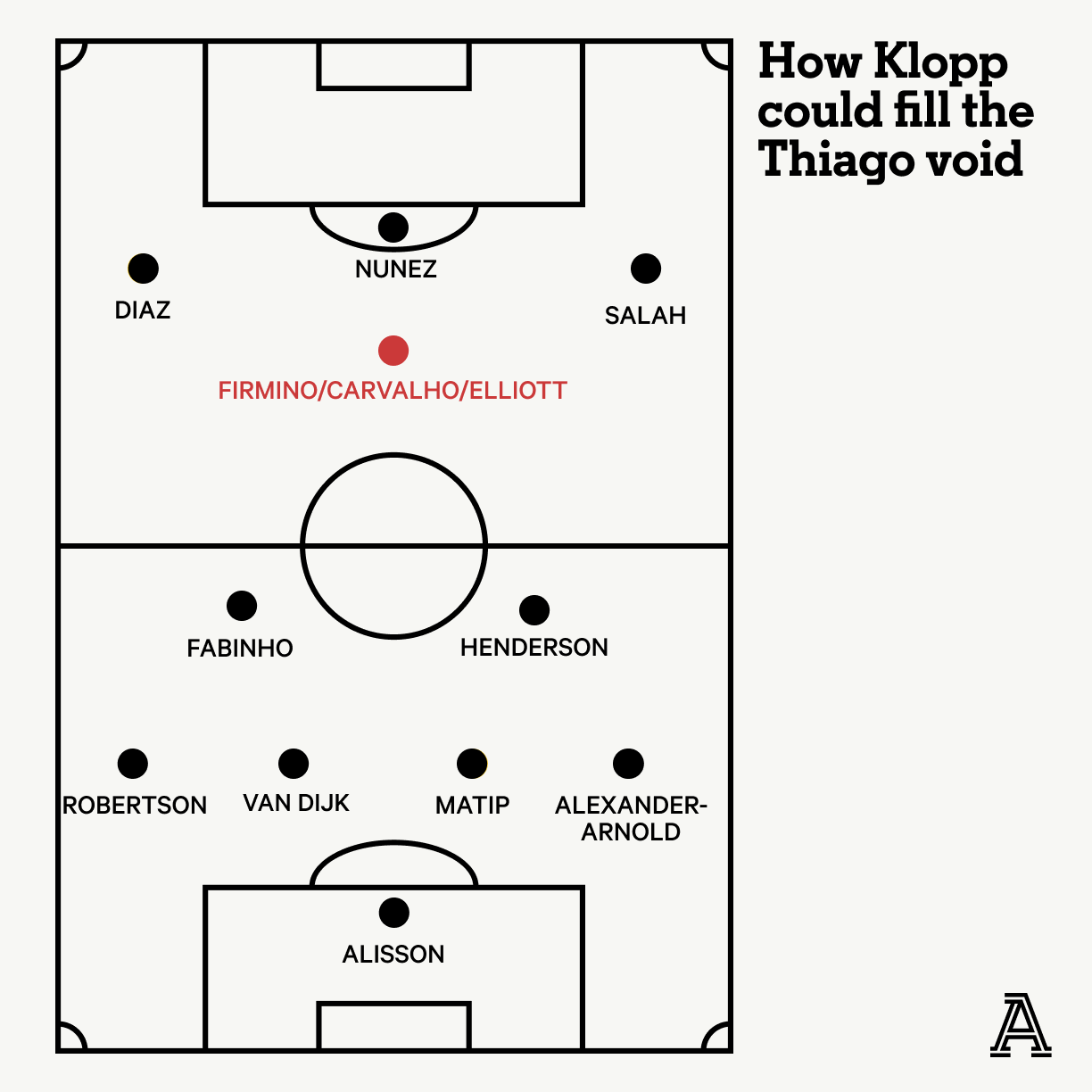 Klopp could switch to 4-2-3-1 with Fabinho and Henderson lining up alongside each other in front of the back four. With Nunez leading the line, Luis Diaz on the left and Salah on the right, Liverpool have a number of suitable contenders to fill the No 10 position. Roberto Firmino, Elliott and Fabio Carvalho all have the skill set to shine in that role given their vision and attacking instincts.

Thiago is unique. Liverpool don’t have another midfielder with his range of passing. But they have coped without him previously and now they must do so again.