It was the kind of goal Ellis Simms would always have dreamed of scoring.

Only 16 minutes had elapsed in April’s Scottish Cup semi-final when the Everton loanee arrowed a shot into the top corner from range to put Hearts ahead against fierce rivals Hibernian.

There have been other memorable moments, including a strike at Celtic on his weaker foot, but the goal at Hampden Park ranks as the 21-year-old’s favourite of his time in Scotland. The high point in a loan spell that has steadily reached a crescendo.

Breaking it down for The Athletic from his temporary home near Edinburgh city centre, Simms says: “A lot of it is instinct. It broke right into my stride and I saw the defender coming across. I just thought, if I struck it early, then the keeper might be off-guard and not expecting it.

“I knew as soon as it left my foot that I’d caught it well and when the net bulged, the adrenaline you get is great. I had family and friends in the stands so it meant a lot.”

What a way for Ellis Simms to give @JamTarts the lead in the derby at Hampden 💜#ThisMeansEverything pic.twitter.com/FtctgUisJ8

It did not take long for news of Simms’ goal to go far and wide. By the time he got back to the dressing room, his phone was awash with messages from friends, family and colleagues past and present.

“Some of the team and staff at Everton, like the physios, congratulated me on the goals. It’s just nice to know they’ve seen it,” he says.

“The type of player I am, most of my goals are in and around the box. One-touch finishes. But in football you need to prepare for different scenarios. You have to put pace on the ball and find the corners.”

Finding the corners — Simms has been doing that with increasing regularity in recent weeks.

He is in a rich vein of form for Hearts before today’s cup final against Rangers, back to the type of purple patch that drew plaudits during a temporary spell at Blackpool last season.

The plan had always been to go back out on loan again in search of regular games, but Simms spent much of the summer recovering from a groin injury that kept him out of last year’s League One play-off final.

⚡⚡ In the blink of an eye, Blackpool add a second – and it’s a moment of real quality from Ellis Simms!

By January, he was finally back fully fit again and in need of another loan. The Athletic understands at least 30 clubs, in England and abroad, have shown interest in him over the last year, but it was Hearts who won the race.

Simms spoke to former Everton team-mate Beni Baningime, who joined the Tynecastle club on a free transfer over the summer, and Hearts manager Robbie Nielson before signing. Nielson assured him that he was exactly “the type of striker he needed and would play”.

“It felt like a great opportunity,” Simms says. “It’s a different challenge, far from home, and a good chance to adapt to a new league and place. My main objective when I first came here was to show what I’m about.

“At the age I am now, I felt like I needed to kick on again and get my name out there. Doing it on the big stage is what I want to be doing. I was ready to move on and take the next step from Premier League 2 football.

“Blackpool was my first loan and in that short space of time I learned so much because it’s a completely different environment. It helped me massively for this loan because I knew aspects would be similar. The game scenarios, the physicality.

“At Blackpool, there were no fans in the stadium because of COVID. Now fans are back it’s massive as it gives that intense atmosphere. The derby in particular was loud and a great experience. It’s great to be playing in games like this and hopefully there’s many more to come.”

Simms has swiftly become a key player for Hearts. He has developed a “good understanding” with strike partner Liam Boyce, who usually plays in a slightly deeper role. The pair dovetail well, bringing complementary skills to the table. Where Boyce was often the lone striker before the Everton loanee’s arrival, now he is part of the supply line from a withdrawn position.

“The manager wants me to be the focal point and stretch play,” Simms, who made a first Premier League start against Chelsea before Christmas, says. “He knows I like to make runs in behind. He’s always trying to help me on the training pitch with my movement and defensive work.

“I’m learning as I play more games, picking up tips from him and the coaching staff. I feel in the last month or so I’ve kicked on. I’m confident and the team is playing to my strengths.” 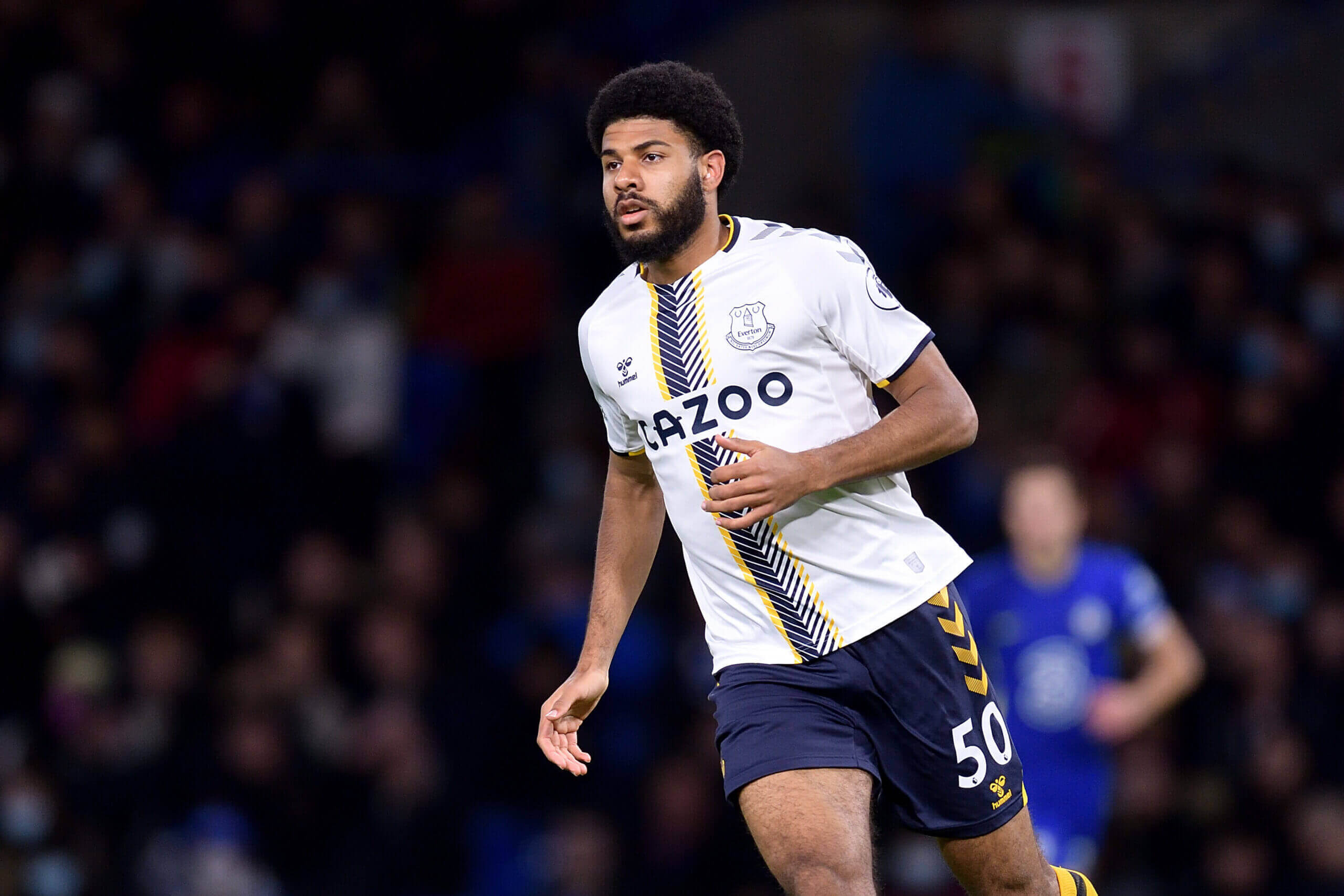 A prolific scorer in the youth ranks for Everton, Simms has struck seven times since joining Hearts on loan in late January.

It is a loan that is becoming increasingly productive. In the last month, he has registered three goals and one assist, equating to a goal involvement every 76 minutes.

“I’ve always backed my ability to score goals,” he says. “I don’t lose confidence if there’s a phase where I don’t score; I back myself for the next one. You have to keep putting yourself in the right areas.

“I’m always wanting to improve and watch games back to see what I can do better. Sometimes you need to adapt to face the opponent, making a slightly different run if they’re playing with a back three. But I like to play my own game and stick to my own strengths. As long as I’m getting opportunities (to score) it’s a good sign. As a striker, I just love scoring.”

The focus has been on improving his goal return as well as his all-round game.

Goals have always come naturally. At youth level, Simms often towered over his opponents and is now an imposing 6ft 1in, getting to grips with the men’s game. He looks to team-mates and coaching staff for tips, drawing in particular on 31-year-old Boyce’s experience when it comes to movement, and watches footage back to see how he can improve.

“I’m using my physique a lot more,” he says. “I’m learning how to use my body but also be more explosive over the first few yards. You have to find different ways to get in on goal as they are more clever (at this level). I speak to players in my position, like Boycey, who have been around a lot longer to see what I can add to my game. Playing in big games means I’m making massive strides.”

Simms’ progress is being monitored by Everton scout John Doolan, who has taken responsibility for the club’s young loan players.

Doolan attends matches and sends on feedback — bits of praise or things to work on. “But it’s also about my wellbeing too which is nice. I know that if I need anything, any advice or clips, that I can speak to him or anyone at Everton.”

None of what he is doing is going unnoticed.

The focus for now is solely on the final against Rangers. But once the season is over and his loan ends, Simms knows the conversation will turn to what comes next.

With two years left to run on his deal at Goodison, he is keeping an open mind. He is ready for another loan spell if it is deemed necessary, and has said he would consider a return to Hearts.

But the long-term goal is still to make it at Everton, where he has been since moving from Manchester City at the age of 16.

Simms has noted the progress and key role former under-23 team-mate Anthony Gordon has played in Everton’s survival.

“I try to watch every Everton game because at the end of the day my aim is to break into that first team,” he says. “Going on loan builds my profile and hopefully I can show the manager what I’m about in pre-season. I’m contracted to Everton so I’ll be happy with whatever they think is best for my development.

“It’s nice to see that there is that pathway there, like with Anthony. He’s got in the team, done well, and stayed there. Had a great season. You see with Anthony and Tom (Davies) that you’ll play if you’re good enough.

“I know if I keep working hard and playing well, I’ll eventually get a chance. Then it’s down to me what I do with that opportunity.”