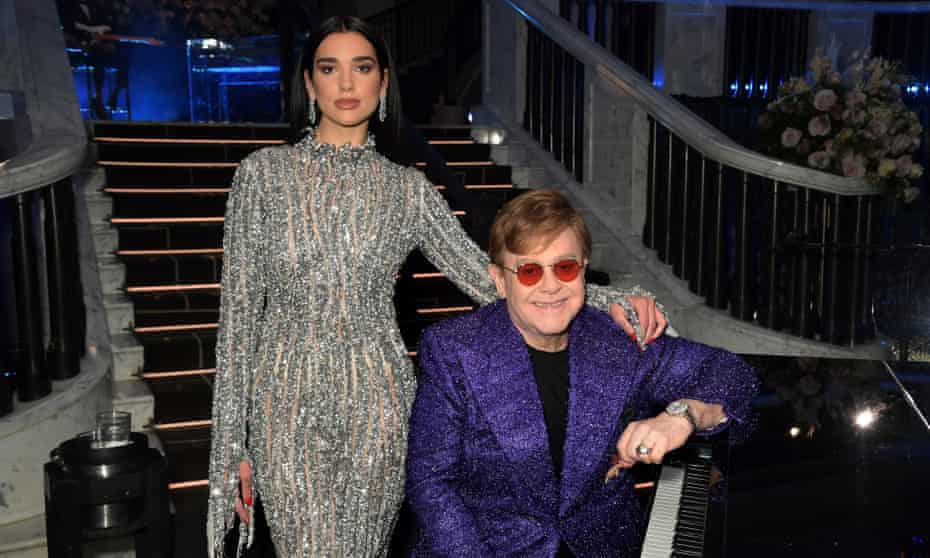 With Cold Heart – a collaboration with Dua Lipa remixed by Pnau – John has beaten Elvis, Cliff Richard and Michael Jackson for longevity at the top end of the charts

The song Cold Heart – a collaboration with Dua Lipa remixed by Australian electronic trio Pnau, which mashes up previous John hits Sacrifice (a 1990 No 1), Kiss the Bride, Where’s the Shoorah and Rocket Man – went to No 4 in September and is on course to knock Ed Sheeran off the No 1 spot this week.

John’s last Top 10 hit was Step Into Christmas, a hit from 1973 that has proved resurgent in the Top 40 during each festive period since streaming figures started counting towards chart placements. It hit No 10 on the final chart of 2020.

His Top 10 hits of the 2000s were generally collaborations – with the likes of Blue, Chipmunk and, posthumously, Tupac – or old songs revitalised by placements on adverts. Are You Ready for Love became his fifth UK No 1 after it soundtracked a Sky Sports spot for the 2003-04 football season. The exception was I Want Love, an original song from his 2001 album Songs from the West Coast.

Unsurprisingly, the decade in which John achieved the most Top 10 singles was the 1970s, when he was in his heyday with the likes of Your Song, Rocket Man, Goodbye Yellow Brick Road and – his first UK No 1 – Don’t Go Breaking My Heart, with Kiki Dee.

With his latest hit, John, now 74, stands a league ahead of Elvis Presley, Cher, Cliff Richard, Michael Jackson and David Bowie, who each had at least one Top 10 single in five different decades. In November, Kylie Minogue became the first woman to top the album chart in each of five consecutive decades with her 15th studio album, Disco.

Elton John and John Grant: ‘We help each other. We are both complicated people’
Read more

Cold Heart is the lead single from John’s forthcoming album The Lockdown Sessions, which features collaborations – some that took place over Zoom – with artists including Lil Nas X, Stevie Nicks and Stevie Wonder, and is due for release on 22 October. He said: “All the tracks I worked on were really interesting and diverse, stuff that was completely different to anything I’m known for, stuff that took me out of my comfort zone into completely new territory.”

John remarked that working on the album had brought him full circle. “At the start of my career, in the late 60s, I worked as a session musician. Working with different artists during lockdown reminded me of that … I was a session musician again. And it was still a blast.”

John is currently recovering from hip replacement surgery after a fall at the end of the summer. The incident caused him to delay 22 UK dates on his farewell tour to April 2023. He was recently honoured at the Broadcast Music Inc (BMI) London awards, which honours the most-played music across all genres, for Bennie and the Jets and Don’t Go Breaking My Heart each reaching 7m performances in the UK, and I Guess That’s Why They Call It the Blues reaching 6m.