ATHENS, Ga. — Travon Walker is gone. Jordan Davis is not walking through that door. He probably couldn’t fit through that door, but either way, he’s gone too along with a bazillion other draft picks off a generationally great defense. Oh, and the defensive coordinator also left.

How can Georgia possibly not have a drop-off so drastic, so considerable, that …

Actually, let’s talk about this Georgia defense and why so few people seem worried about it suddenly turning into a Hal Mumme-defensive optional team or even the Georgia days of Willie Martinez or late-stage Todd Grantham. Let’s discuss why the expectation is Georgia can lose five first-round picks, have its defensive play-caller now coaching the opening-game opponent, and the reaction seems a collective shrug. 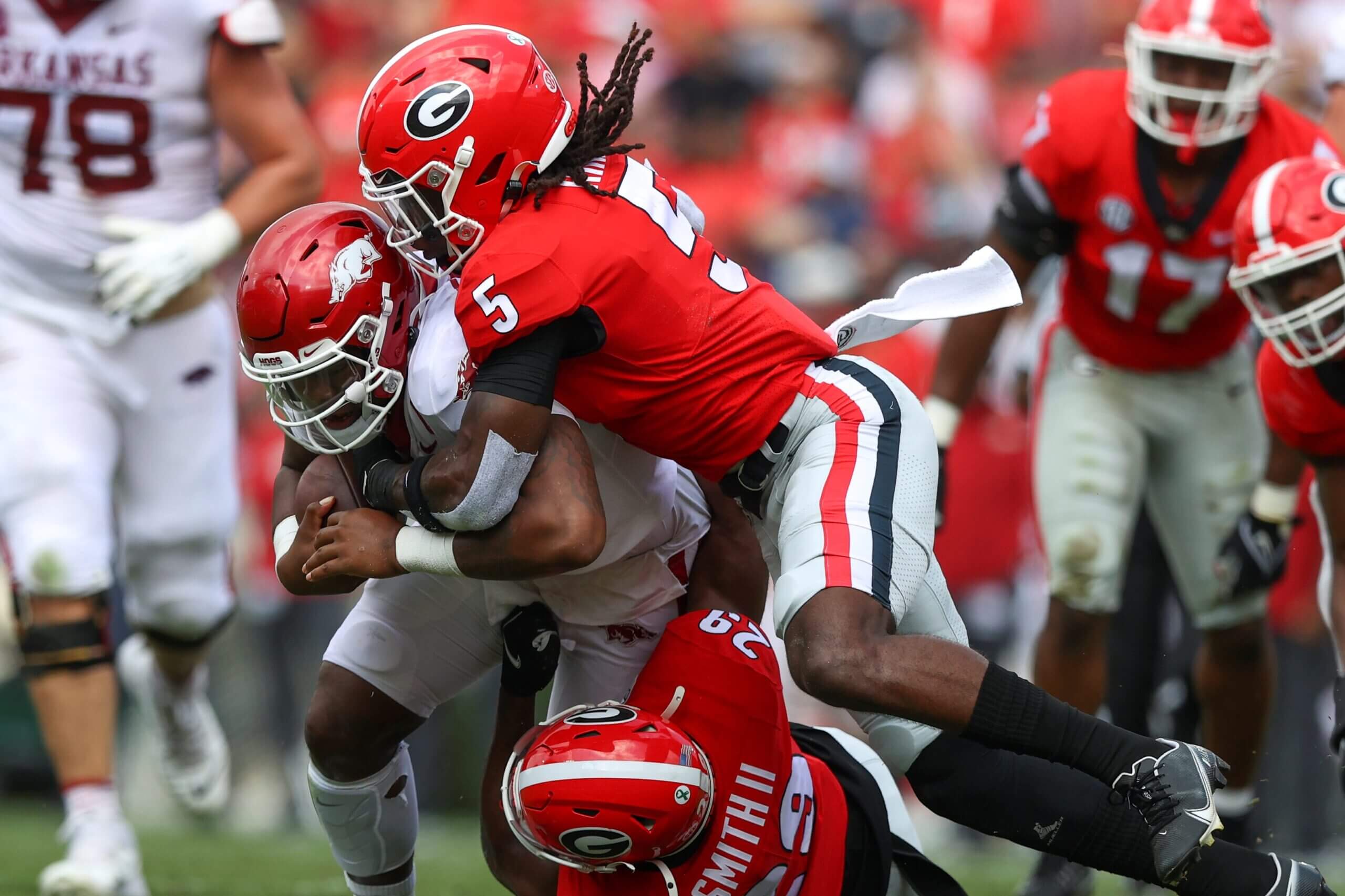 The explanation was on Georgia’s practice field Tuesday afternoon, in the visage of the man barking orders into a microphone and the names of some of the people he was barking at.

“Daylen (Everette), you can’t push into that guy? What the hell are you doing?”

“Malaki (Starks), why’d you chase him in there?”

Not verbally called out during the media viewing period, but perhaps later: Marvin Jones Jr., Jaheim Singletary, Julian Humphrey and plenty other examples of why the panic meter about Georgia’s defense is so low.

Good seems like the minimum to expect this season. Elite seems too much to expect … at least right away.

The last time Georgia lost this many core defensive players, the defense did have a drop-off: The 2018 defense fell from 10th to 25th nationally in yards per play and from sixth to 14th in scoring defense. That defense only held two opponents to single-digit points — Austin Peay and Middle Tennessee — after holding five opponents to nine points or fewer in 2017, all five of those Power 5 teams.

Such was the cost of losing Roquan Smith, Lorenzo Carter and five other starters from the previous year’s national championship game. This year’s team loses the same number of starters — seven — but way more draftees: Only Smith and Carter were drafted off the 2017 defense, whereas the 2021 defense lost five in the first round alone and eight total. The 2021 defense was so good a backup went in the third round.

So how can there not be a bigger drop-off than four years ago? Because Smart has had four more recruiting cycles to stack talent and depth: There are 10 former five-star recruits on this year’s defense, eight who were top-100 recruits and 16 more who were four-stars prospects. In terms of pure talent without regard to age or experience, there arguably is as much on the 2022 defense as the 2021 defense.

But age and experience do matter. Even then, the schedule would seem to allow that leeway to buy time to get that experience and stay in national contention. Imagine, for instance, this potential lineup matching up against Alabama in December:

And that’s with players like MJ Sherman, Xavian Sorey, Rian Davis, Trezmen Marshall, Jones and plenty of others providing good snaps off the bench. Doubtless, this guess at a depth chart is neglecting someone who makes a bigger impact than expected because there are plenty of such candidates.

“We’ve been saying for a long time now, ‘If you’re good enough, you’re old enough,’” said Glenn Schumann, the other half of the co-coordinator tag team. “Camp is about figuring out who our best players are, and that doesn’t have a birthdate on it. We need to figure out who are best players are and challenge them early across the board, whether they’re old or young and see what they can learn, what can they handle, what do we need to work on them with, what do they do best.”

But that is a dilemma: Do the coaches roll with the talent right away, let those players get that experience and hope it doesn’t cost any games? Or do they lean on experience, such as sixth-year seniors Beal and Poole, walk-on safety Dan Jackson and others who may not have quite the upside but also aren’t likely to remind fans of the youth-laden 2013 secondary, watching touchdowns sail over their heads?

Georgia’s approach to playing time may help here. The coaches spread it around, Schumann pointing out that last year 19 players saw at least 200 defensive snaps. Nine of them are back, by my count, as are four others with at least triple-digit snaps. It would seem you could intersperse those veterans with a few of those five-star prospects ready to play right now (defensive end Mykel Williams, for instance) and other youngsters ready for more action (cornerbacks Nyland Green and Kamari Lassiter, for example.)

“The way we use our personnel, it’s a little bit different,” Schumann said. “You figure out who your best players are, what you need to do to be successful. You do that as a staff cooperatively to give yourself the best chance on gameday. When you do that, then you get a good product.”

Perception that Smart is the one in charge of the defense has not stopped his defensive coordinators from moving on to big-time jobs: Mel Tucker parlayed three years under Smart into the Colorado job, then Michigan State, where he’s on a $95 million, 10-year contract. Dan Lanning parlayed his three years into the Oregon job.

Now the job has been passed on to two people, each in different stages of his career.

Muschamp is coming off two failed head coaching stints in the SEC, but back home at Georgia, he seems to be back in his element. During his 20-minute news conference Tuesday, Muschamp was issuing quips, such as when asked what it was like to be called a co-coordinator: “I’ve been called a lot of things.” Nobody’s giving Muschamp another big-time head coaching job any time soon, but there was a reason he worked his way up the ladder: Few questioned his defensive coordinator chops.

Muschamp calls Dan Jackson “the second-best walk-on safety in Georgia history, you figure out who the best one is.”

Schumann, meanwhile, is a 32-year-old wunderkind, who has been working for Smart his entire adult life. Schumann began as an 18-year-old student assistant at Alabama, then came with Smart to Georgia eight years later. Schumann is going to be a head coach very soon, but in the meantime, he gets to burnish his credentials as the co-coordinator, whatever that means.

What does it mean? Nobody seems to care. As long as Smart is still in Athens, and thus is the one still in defensive meetings and still deciding who to trust with gameday calls, nothing major really changes. Or at least what does change comes with a sense of confidence.

There’s one more thing this defense has going for it: It doesn’t have to be elite this year. Or at least it shouldn’t have to be, if the offense is as good as expected or even better. In 2018, when that defense was replacing all those veteran leaders and took a step back, it also had one of the best offenses of the Smart era: Jake Fromm, entering his second year as starter, led an offense that finished seventh nationally in yards per play and was 14th in scoring offense. Each is the second-best of the Smart era, behind only the 2021 offense, which returns its starting quarterback, three offensive line starters and a plethora of potential weapons.

As much as Georgia’s defense helped its offense last year, whether it was field position or taking the pressure off, the offense can do the same for the defense this year.

But the defense will hold its own: As the Bulldogs practiced Tuesday, the first day in full pads, NFL scouts were all over: the Chargers, Saints, Broncos and two from the Seahawks. A Raiders scout stood so he could swivel his neck in between the outside linebackers (Nolan Smith and others) and defensive linemen, where four other scouts stood watching. Davis wasn’t out on the practice field. But Jalen Carter still is, and Logue could be this year’s DeVonte Wyatt, and Williams could someday be the next Walker … and so on.

Will the Georgia defense have a drop-off this year? Maybe. Will it be a big one? Almost certainly not.