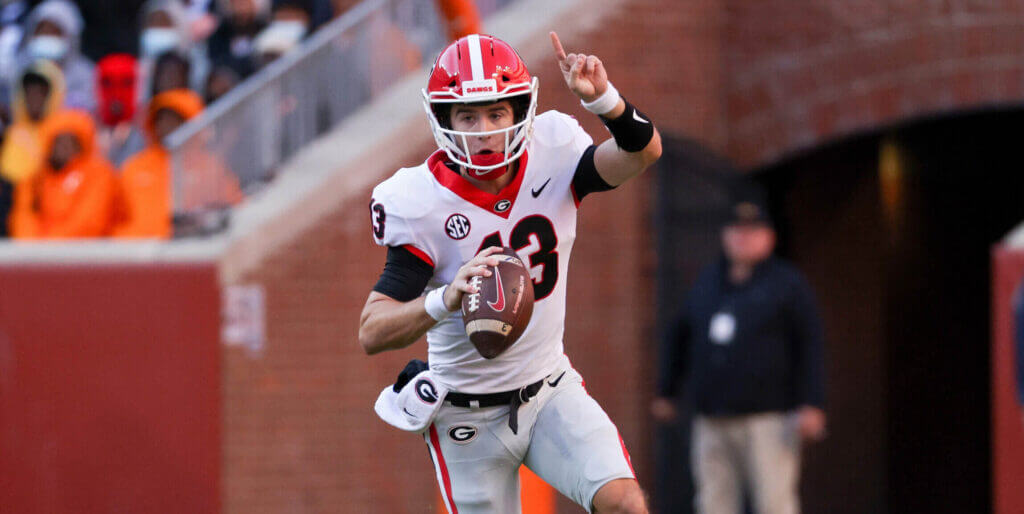 ATHENS, Ga. — Stetson Bennett was having some fun. Five days from the start of his first season as The Starter, he joked with reporters about his hair — the buzz cut will stay indefinitely — and his pregame playlist: “Bubbly,” a folk, pop song by Colbie Caillat, somehow fires him up before games. It starts in his toes, he crinkles his nose, he gets the tingles in a silly place …

“I know I probably shouldn’t have said it, but that’s what it is,” Bennett said.

Bennett’s press session, when he talked about cutting his fingernails during pregames and also listening to The Notorious B.I.G., rudely was interrupted by one jerk reporter (sorry, t’was me) asking a serious question: Is it good that he’s finally the starter this year, or was there any motivational factor going on last year? Bennett gave a good analytical answer that argued the way he has played was never to “shut up the doubters,” before offering up a wry aside.

“Now if we’re going to say there’s none this year,” he said, “I don’t know about that either.”

Steqavious Bennett on his hair: “I think I’m gonna keep it short. I walked outside last night at 8:30 and I’m like, is this southern Louisiana?” pic.twitter.com/dq6tZnwM6J

The first bad pass that Bennett throws this year, the naysayers will be back. The people who still believe Bennett and Georgia’s offense had little to do with winning it all. The people who wished Bennett had left on a high note rather than risk his legacy, who saw Bennett as blocking JT Daniels’ path to returning as the starter or Georgia spending this season seeing what it had in Carson Beck or Brock Vandagriff.

Daniels, meanwhile, will be starting at West Virginia and perhaps throwing for 300 yards every night, thanks to closer games and weaker competition. (Probably.) Pity the reasonable souls of the world on Saturdays when Daniels has huge games and Bennett doesn’t measure up. (Assuming there are such Saturdays.)

It won’t be fair. Bennett should be beyond proving things to people by this point. Take this from a former Stetson skeptic. (And who wasn’t? He was a 5-foot-10 walk-on, for all that is good and holy.) Take it from someone who wrote as late as last December, after the SEC Championship Game debacle, that if Daniels was healthy, Georgia seriously should consider giving him a look for the College Football Playoff.

Then the Orange Bowl happened; everyone seems to forget that game. Everyone seems to forget that Bennett, facing what was considered one of the best defenses in the country, put the game away in the first half, throwing for 67 yards on the first drive and 253 yards in the first half.
The doubters started chirping again in the national championship game, but Bennett should have ended all that in the fourth quarter: Trailing by five, ball at his own 25, twice he led 75-yard drives that ended in his touchdown passes. He passed for 90 combined yards on those two drives, along with two more passes that drew 30 yards of defensive pass interference penalties.

And yet … the doubts will persist. Especially if Oregon head coach Dan Lanning, who went against Bennett in practice the past three years, dials up the right approach to containing and rattling him Saturday. It could happen. So many defenses the past few years were stacking the line and geared toward stopping Georgia’s run, and Bennett was able to burn that. Lanning may not make that mistake.

Nor may other opposing coaches. Football coaches, as part of their job, know football, and the good ones take preconceived notions out of their thought process. They’ll look at last year’s film and see that Bennett has the skill-set to beat them. They’ll respect Bennett and game plan accordingly.

That’s the cautionary note when it comes to expectations. There are also notes in the opposite directions.

Bennett being the unquestioned starter all offseason should have some tangible benefits. He has been more communicative with offensive teammates, per center Sedrick Van Pran, who said Bennett has hit him up with texts to watch film and has been more vocal in practice. Those are things Bennett wasn’t as comfortable doing when he was the No. 4 QB in 2020 and the No. 3 QB this time last year.

Nolan Smith, the senior outside linebacker, also noticed a physical change in Bennett.

“Man, talk about quick. He outran a couple of us early on in practice when a lot of people were fresh,” Smith said. “I’d just say he’s faster, he’s stronger and has that confidence level and shows that the team is behind him.”

Bennett pointed to subtle ways that being the No. 1, and all the practice reps that come with it, have helped him: “You can draw up on paper that you’ve got a 15-yard steep route. But you’ve got five different wideouts who could run five different ways. So just knowing, expecting that, ‘OK when AD (Mitchell)’s hip turns, OK well now let’s throw.’ Or ‘Ladd (McConkey’s) elbow (does something), let’s throw.’ Just little things like that you wouldn’t know until you do have those 1,000 extra reps.”

There is a vibe shift with Bennett this season. He was a great story, and that will never change: He could fall flat on his face this season, and it would just be a postscript to what he accomplished last year, going from walk-on to national championship quarterback. We probably still don’t fully appreciate how remarkable, how amazing, that story is. But this season isn’t about that story anymore: It’s about Bennett backing it up and showing he’s more than just the cool story.

One of the most underplayed parts of Bennett’s journey is how long it took his own coaches to be convinced. He was Jake Fromm’s top backup in 2019, but when Fromm left early, Bennett did not ascend to the top role. In fact, he descended to No. 4 as the coaches brought in two transfers (Jamie Newman and Daniels) and leapfrogged by a redshirt freshman (D’Wan Mathis). It took Newman opting out suddenly, Daniels not being ready and Mathis struggling for Bennett to finally get his shot, rescuing the Bulldogs off the bench in the 2020 season opener.

Even then, we know what happened: Daniels eventually got the job, and early last season when Daniels’ oblique injury caused him to be held out for Week 2, Carson Beck was in position to get the start before the coaches got cold feet with the redshirt freshman. Bennett went in, went out again when Daniels returned, then Daniels got hurt again, and Bennett went in and never came out.

By late last season, Smart, Todd Monken and the coaching staff essentially said: We’re done doubting this kid. If the coaches most invested in it are on board with Bennett, why isn’t everybody else?

“When people are like, ‘Do you play with a chip on your shoulder?’ If you do, that’s when that question comes into question,” Bennett said. “If this guy can only be Superman whenever everybody felt that they couldn’t be, then what happens when everybody thinks he can be. Does he lose that extra edge. And so that’s why good or bad, I really don’t worry about what other people have to say. It all comes from within for me. I know what it looks like, I know what it feels like to be good.

“I want to do that, for me and my teammates. Not to prove anybody wrong.”