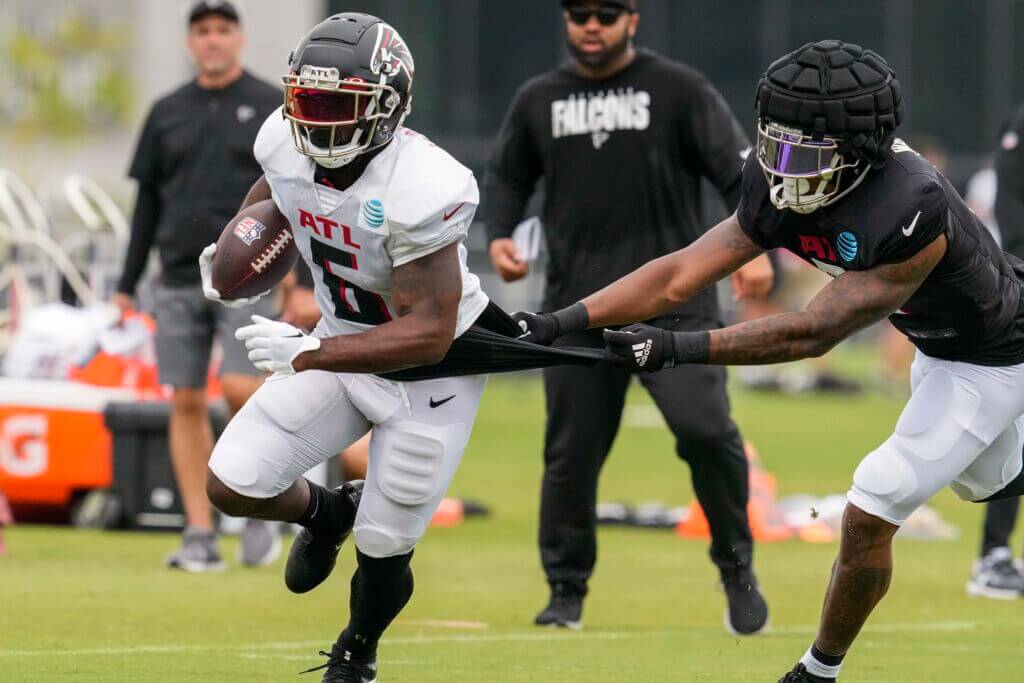 “We’ll see how it goes,” Smith said. “He’s a really tough guy. I don’t foresee it being major, but as you know dealing with backs, and heads and hearts, those things are tricky.”

Mayfield’s back injury could explain why he has struggled so mightily in training camp this year. A third-round pick out of Michigan in 2021, he started 16 games last season and struggled, grading out at 49.2, including 27.6 on pass blocking, according to PFF. He opened camp this year with the first team but was replaced by free-agent signee Elijah Wilkinson on the second day of practice and has not returned to the first group.

“We have to get (his back) to calm down,” Smith said. “We will see where that goes.”

Pitts will play in preseason

Tight end Kyle Pitts played two snaps in the entire preseason last year, both of which came in the final preseason game. He expects a much heavier workload this preseason, starting with the Falcons’ game at Detroit on Aug. 12, he said.

“I definitely want to,” said Pitts, who added that Smith has told him that he will get playing time.

Ridder’s accuracy could be issue

Rookie quarterback Desmond Ridder, who led Cincinnati to the College Football Playoff last season, generally has impressed his teammates, but the No. 74 selection has sailed a few balls high during training camp. Ridder’s accuracy was a concern among draft analysts.

“I thought he did well,” starting quarterback Marcus Mariota said of Ridder’s first week of training camp. “For young guys, it’s just, ‘Take what you learned in the offseason and apply it to training camp.’”

Eighth-year running back Damien Williams had the first “vet day” of his NFL career Wednesday, sitting out training camp practice for no other reason than to get some rest.

Williams was signed as a free agent in the offseason and has taken turns working with the first team throughout training camp.

“I love it here,” said Williams, who has played for three NFL teams, most recently Chicago. “Everybody is in the locker room and we’re playing basketball, we’re playing ping-pong, we’re together. I’ve been on teams where everybody needs their alone time. Everybody here brings the youth out of you. I don’t feel old around these guys at all.”

“I feel like that’s what I’ve been great at,” Williams said. “That’s what (Smith) is looking for. Our personalities fit.”

Veteran linebacker Deion Jones has remained engaged in Atlanta’s locker room and meeting room, according to linebackers coach Frank Bush, despite not being on the field since the end of the 2021 season because of a shoulder injury.

“He’s missing time on the grass and you can’t replace that, but he’s been very, very engaged in the room,” Bush said. “He’s into it. He’s studying. He was one of the guys who got here early. He stays late. He’s really trying to take ownership and be a part of it even though physically he can’t be out there.”

Jones has been on the physically unable to perform list since the start of training camp.

“No one knows when he’ll be back,” Bush said, “but he’s been a good teammate.”

Quarterback Feleipe Franks threw his first passes of the preseason Friday, throwing to receivers briefly in one-on-one drills. Franks has spent most of his time in training camp working with the tight ends. In fact, he made two nice catches in the same drill before jumping into the quarterback rotation.

The week around the world in 20 pictures