FLOWERY BRANCH, Ga. — The Falcons are serious about not overworking Cordarrelle Patterson before the season starts. So serious, the 10th-year running back/wide receiver is having to find ways to pass the time during training camp.

Patterson, who joined the Falcons last year and quickly became a fan favorite, has gone to the roped-off area where fans watch practice to talk to kids, take pictures and sign autographs at least five times during practice in the past two weeks.

“I think it’s the first time in my career I’ve done that,” Patterson said. “I don’t know. I’m getting old. I can’t really remember a lot of stuff. I’m not doing nothing during that period, so I can either sit down and get stiff or I can go over there and sign autographs. I choose to sign autographs, stay loose.”

Any other player might be accused of poor focus. Patterson, though, has earned the benefit of the doubt in Atlanta.

“It doesn’t bother me,” head coach Arthur Smith said of Patterson’s practice wanderings. “If a guy does something that bothers me, I’ll let him know. Some guys you have to let them be themselves. I appreciate the fans coming out here. If it was a distraction or he wasn’t practicing as hard or focused, then I’d have an issue, but he loves the attention.”

Besides, Patterson’s lightened workload is not his choice.

“He’s got good work habits,” Smith said. “Everybody is in different parts of their careers. With CP, where he is, at the usage rate he had last year, we are trying to maximize him.”

Patterson, 31, had a career-high 1,166 yards from scrimmage (618 rushing, 548 receiving) and 11 touchdowns last season, his ninth in the NFL. His 205 offensive touches more than doubled his previous season high, but his production trailed off dramatically late in the season. He averaged 31.8 yards per game rushing and receiving combined in the final five games.

“Late in the year, I was banged up a little bit, couldn’t play the way I wanted to play,” Patterson acknowledged.

SOUND ON! 🔊@ceeflashpee84 mic’d up is pure comedy 😂

That’s why the Falcons happily allowed him to miss OTAs this year and kept him off the practice field during minicamp and still are going easy on him in training camp. Free-agent signee Damien Williams has gotten many of the first-team reps at running back during practices.

Patterson is fine with the light workload in camp as long as it doesn’t extend to the season. He has already begun negotiating with Smith, he said, about how many receiving targets and rushing carries he should get this year. He joked that their numbers were “far apart” because he wants more than Smith is offering at the moment.

Smith chuckled at the idea that there’s a great debate about Patterson’s usage.

“He loves the attention, and he loves to come out here and be a media manipulator,” Smith said. “I’m sure he gets a little dopamine drip, probably goes and searches his name on social media and feels all warm inside. CP’s great. He’s here to help us win. Whatever the game plan is, that’ll be how many carries he gets.”

Patterson probably shouldn’t worry about being underused. His value to Atlanta’s offense is clear. He had seven more touchdowns than any of his teammates last season. In the Falcons’ seven wins, he averaged 17.3 touches per game. In the team’s 10 losses, he averaged 10.2. The Falcons lost only once when he had more than 15 carries and catches combined, and they averaged more yards per passing attempt (7.76 to 6.48) and rushing attempt (3.91 to 3.69) with Patterson on the field, according to TruMedia.

“Obviously, we were a pretty effective offense when he was really rolling on all cylinders,” Smith said. 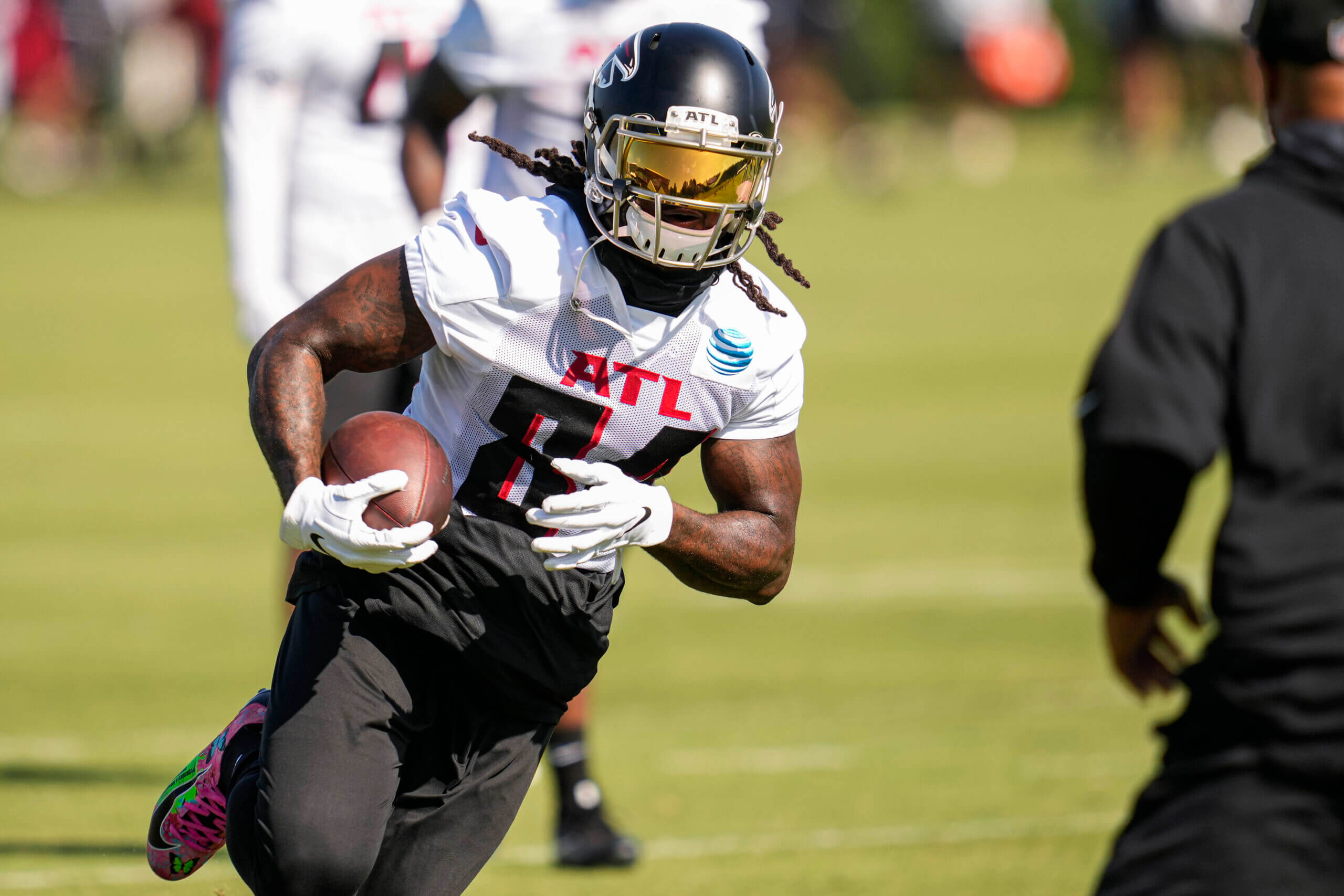 Cordarrelle Patterson averaged 17.3 touches per game in the Falcons’ wins last season and 10.2 in their losses. (Dale Zanine / USA Today)

Patterson stayed in touch with special teams coordinator Marquise Williams throughout the offseason to lobby for kickoff return duty, he said.

“I have a great relationship with CP. We do speak a lot,” Williams said. “We are going to play the best 11 guys.”

Although Patterson was given offseason downtime by the Falcons, he said he didn’t alter his usual offseason training program.

“I take my job seriously,” he said. “I do the same thing every year. It’s the same. You can’t go changing stuff every year. That’s when you mess up. Training is something I do every day. We train all year long for this sport. It’s something I love. I’m just going to continue to do it until the wheels fall off.”

Patterson played in Atlanta last year on a one-year contract, and the team re-signed him on March 19 to a two-year, $10.5 million deal, $5 million of which is guaranteed.

“Of course I wanted to be here — the whole world knew that,” he said.

Patterson wanted to remain in Atlanta because “there’s love here” and because of the multiple ways he is used in Smith’s offense, he said.

As Patterson enters his 10th year, his teammates have taken to calling him “Unc,” a term of respect but also a bit of a jab about his age.

Still, Patterson remains just as excited about football as he’s ever been. He woke up his longtime girlfriend the morning he left for training camp this year to have her take videos of him embarking.

“I come to work each and every day with a smile on my face. I’m thankful,” he said. “It’s something I’ve been doing since I was a kid, and to do it 10 years in the NFL is a blessing.”