FLOWERY BRANCH, Ga. — Falcons quarterbacks coach Charles London said rookie quarterback Desmond Ridder “confirmed most of the things we thought about him,” in Friday night’s preseason win over the Detroit Lions, but, if we’re being honest, Ridder exceeded the expectations of almost everyone else.

The Falcons selected Ridder out of Cincinnati with the No. 74 pick in April. He was the second quarterback drafted, but the fact that he slid into the third round was a sure indication that no one in the NFL considered him a sure thing. So far, so good for Atlanta, though.

Ridder was 10-for-22 passing for 103 yards and led the Falcons in rushing with six carries for 59 yards. His accuracy numbers were hurt by four dropped passes and one intentional throwaway, but he looked comfortable in the pocket and said he wasn’t overwhelmed by his first professional action.

“I think he’s been accurate all camp, I really do,” London said. “That hasn’t been a concern of mine. I know some folks wanted to knock him for that coming out, but I don’t think it’s been an issue.”

The effort was easily good enough to consider Ridder’s stock to be on the rise after the first preseason game of the year.

“For what it’s worth, I felt like I did pretty well,” he said.

Ridder remains the clear No. 2 quarterback behind Marcus Mariota, but he played well enough Friday to imagine he might close the gap by the end of the season.

“I was proud of Desmond,” head coach Arthur Smith said. “It wasn’t perfect. There’s a lot to learn from, but he kept swinging.”

Ridder’s performance got attention outside of Atlanta, too.

on the next man coverage look. Watch Desmond Ridder change the Mike point for the protection. Which flips the OL half-slide and RB’s responsibility. pic.twitter.com/Hon5WcO57D

Ridder played a team-high 43 snaps Friday night. He threw an interception on what he called “a miscommunication” with a wide receiver, but it was called back due to a defensive penalty. He also threw the game-winning touchdown pass, a 21-yard toss to Jared Bernhardt on fourth down.

“It was Cover 1 man. We had a fade on the backside so I was looking at that,” Ridder said of the throw to Bernhardt. That wide receiver “kind of got beat up off the line so I kind of progressed off of it and came back and felt an edge so I rolled out to the right. At that point, you have to give someone a chance.”

Smith said there were no designed quarterback runs in Friday night’s game, and that he was happy with the decision-making on all of his quarterbacks’ rushing attempts. Mariota carried the ball three times.

“Once the holes opened up, just seeing the holes and taking off, trusting my feet and trusting my reads, that’s part of my game,” Ridder said.

Here are Atlanta’s other risers and fallers after one game:

Cornerback Dee Alford: Alford is fighting for one of the final defensive back spots, and he helped himself Friday. He had a team-leading eight tackles, but more importantly, he made an athletic interception. The Falcons struggled to create takeaways last season, and this coaching staff believes in players who have a “knack” for things. Alford showed a knack for big plays.

Wide receiver KhaDarel Hodge: Hodge’s impressive training camp performance was highlighted by the fact that he started the game at wide receiver. He was in for eight plays and made one catch, for 12 yards.

Running back Qadree Ollison: The fourth-year Falcon took advantage of his 12 snaps, carrying the ball five times for 33 yards. He showed enough burst to make the running back competition a lot more interesting in the next couple of weeks.

Running back Tyler Allgeier: Along with a key blitz pickup, the rookie averaged 8.3 yards per carry. The Falcons are going to have to cut a good running back. 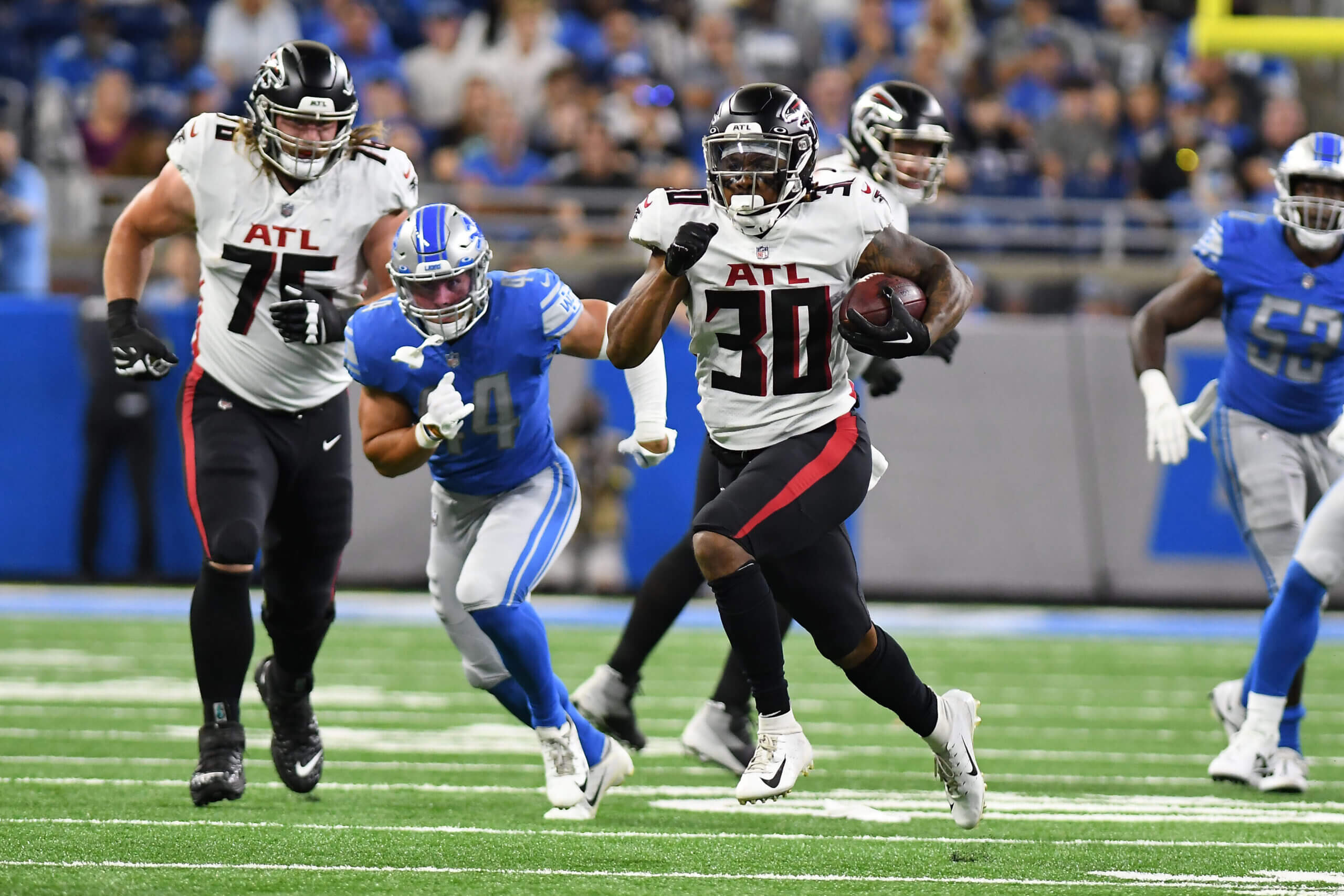 Tight end John FitzPatrick: The sixth-round pick out of Georgia played only four offensive snaps and none on special teams. That’s not a good sign for a rookie looking to make an impression.

Running back Damien Williams: The veteran free-agent signee got only three carries (for 10 yards). This could be a good sign if it means the Falcons are convinced that he’s earned a roster spot, but the pop that Ollison showed has to at least leave some doubt.

Center Drew Dalman: The Falcons had given Matt Hennessy and Dalman equal turns with the first team throughout training camp, but the fact that Hennessy played only the first series (13 snaps) before giving way to an extended performance from Dalman (28 snaps) is an indication Hennessy is the more trusted player at this point.

Wide receiver Auden Tate: If Tate is competing with Hodge and Geronimo Allison for a roster spot (and it looks like he is), it’s a bad sign for him that Hodge started the game and Allison was very involved while Tate had only one catch for 7 yards.

Guard Jalen Mayfield: The left guard, who played with the second team, continued to struggle. It’s probably not fair to put him in this category because his struggles may be injury-related (back), but this is where he finds himself. Mayfield practiced Sunday.