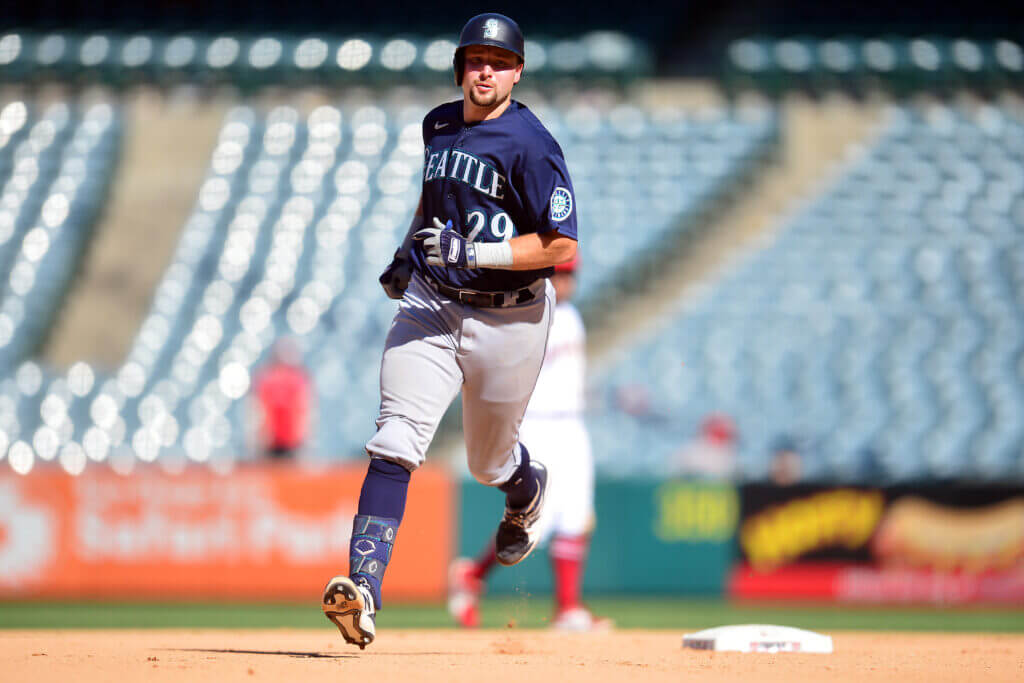 ANAHEIM — Here’s the funny thing about hitting rock bottom: You don’t always know that’s where you landed during that precise moment in time. Sometimes, it takes distance and time to fully understand just how bad things have gone.

For these Mariners, that point, undeniably, happened two months ago this Friday when they dropped the third of three consecutive games to the Angels at T-Mobile Park, including the final two games in which they didn’t score a single run.

The Mariners were 29-39 and if not for the A’s, would have been looking up watching the world pass them by from the cellar of the American League West. Not ideal given the team entered the season with (reasonable) playoff aspirations.

Two months? It feels like two years given what has transpired with the Mariners since then, going from a postseason afterthought to holding the top wild-card spot in the AL after running the hapless Angels into the ground for a three-game sweep at Angel Stadium, culminated by Wednesday’s 11-7 victory.

You certainly don’t have to be a math wizard to see that the Mariners (65-54) have enjoyed a 21-game swing in the standings since that dreadful day in June against these same Angels.

“It’s crazy … it’s a crazy game,” said Mariners catcher Cal Raleigh, who hit two home runs Wednesday. “It’s a credit to the guys we have in here. They’ve kept their heads up.

To be clear, the Mariners haven’t assured themselves of reaching the postseason for the first time since 2001, but at the same time, it becomes easier and easier to believe in what they have and what they’re doing with each passing day. And while it was pitching — starting and relief — that got their season turned around, there’s more to it than that.

This team, offensively deficient and often shorthanded due to injuries in the first three months of the season, finally has a full complement of players and a lineup that is capable of putting up some crooked runs on the scoreboard — which was the case against the Angels, against whom Seattle scored 25 runs in three games.

Could it be that the offense is finally starting to catch up with the pitching?

“I know we’re capable of great things as a lineup, one through nine,” said outfielder Mitch Haniger, who returned on Aug. 6 after missing 87 games with a high ankle sprain. “And we have a really deep bench. Good teams have that, and I think we have that.

“We’ve made some really good additions (to the roster) and hopefully we keep it going and keep getting hot at the right moment. We’re really playing well. We’ve just got to keep it going.”

Getting Haniger back from the injured list was a plus for the offense, as was getting All-Star outfielder Julio Rodríguez back from the IL after he missed 11 games with a right wrist contusion. The same goes for another All-Star, Ty France, who missed 12 games earlier this summer with a right elbow sprain.

But finally, the Mariners have the pieces back they’ve been waiting to assemble together for the first four months of the regular season, and, not surprisingly, the results have been trending better.

“This is kind of how we saw this thing playing out when we left Peoria (spring training),” said Mariners manager Scott Servais. “Unfortunately, things happen throughout the course of the year and you have to deal with adversity.

“I certainly would have liked to have this together earlier. It wouldn’t have been a struggle as it was earlier in the year.”

No sense looking back anymore, not with what the Mariners have ahead of them; the opportunity to break their lengthy postseason skid. Their schedule is favorable. The team’s starting rotation is among the best in the AL, if not baseball at this moment. And now, the offense is starting to show its teeth.

Take Wednesday. It was a scheduled off-day for France. So Servais slid veteran Carlos Santana into the lineup. Santana responded with a big two-run single in the fourth inning to get the offense going.

Then there was Raleigh, who made the team out of spring training but was sent back to Triple A after struggling. When Tom Murphy was lost to the IL, Raleigh returned with a more simplified approach at the plate and more patience. Now, no catcher in baseball has more home runs (19) than Raleigh.

The bench, with Sam Haggerty and Dylan Moore, has saved the Mariners on more than one occasion. Haggerty might be one of the more important players on this roster given his defensive versatility, his bat and speed.

Put it this way: The Mariners scored 11 runs on Wednesday and Rodríguez didn’t have a hit, nor did he knock in a run.

No, this group is not going to score 11 runs every game, but it stands to reason that this is the best this lineup has looked at any point of the season. There’s average. There’s power. There’s depth.

Add all of that up (and, you know, more pitching), and it could certainly be a fun final seven weeks of the regular season.

“I’m excited about what lies ahead for our offense,” Servais said. “We’re going to need everyone contributing here as we go down the stretch. It’s really going to be a difference-maker for us.”