As a kid growing up in Canton, Ohio, it took a while for Josh McDaniels to process what the Pro Football Hall of Fame meant to people. That hits him especially hard now, as he returns Thursday to lead his new team, the Raiders, in their first exhibition game of the season.

It will be a nostalgic moment for McDaniels, as he returns to the former Fawcett Stadium — now Tom Benson Hall of Fame Stadium — where he played for his dad, Thom, for Canton McKinley High.

“I played all my games in this stadium, and it’s a special place,” Josh McDaniels said Sunday. “They have helmets on the double yellow lines when you are driving down the road. You pass the Hall of Fame every day when you go to school in high school. You’re playing right there, and you can see it over the stands.

“It was a great place to be a young boy that loved football and what a blessing that I have an opportunity to come back there and do it. I never would have dreamed that this would have happened.”

McDaniels wouldn’t dream of sharing which of his players will face the Jaguars, but it’s a very safe bet that Derek Carr and the other starters will be spectators like Thom and the rest of the McDaniels clan. McDaniels and his staff will be evaluating the bottom half of the 90-man roster, as those players work to make their own dreams come true on Aug. 30 when rosters are cut to 53 players.

The fact that the Raiders also play the Jaguars in the regular season in Week 9 on Nov. 6 won’t affect the game planning in the epic quarterback matchup between backups Jarrett Stidham and Jake Luton. (We’re assuming that Stidham plays for the Raiders, as his competition with Nick Mullens for the No. 2 job behind Carr seems like a mere formality.)

“There’s such a time gap between when we play them and this game coming up,” McDaniels said. “There’s a lot that’s going to happen between now and then. I don’t think you’re going to see any triple-reverses or all those kind of things in this game on Thursday night. Not that we’re going to run that either in December, November, whenever we’re going to play them.” 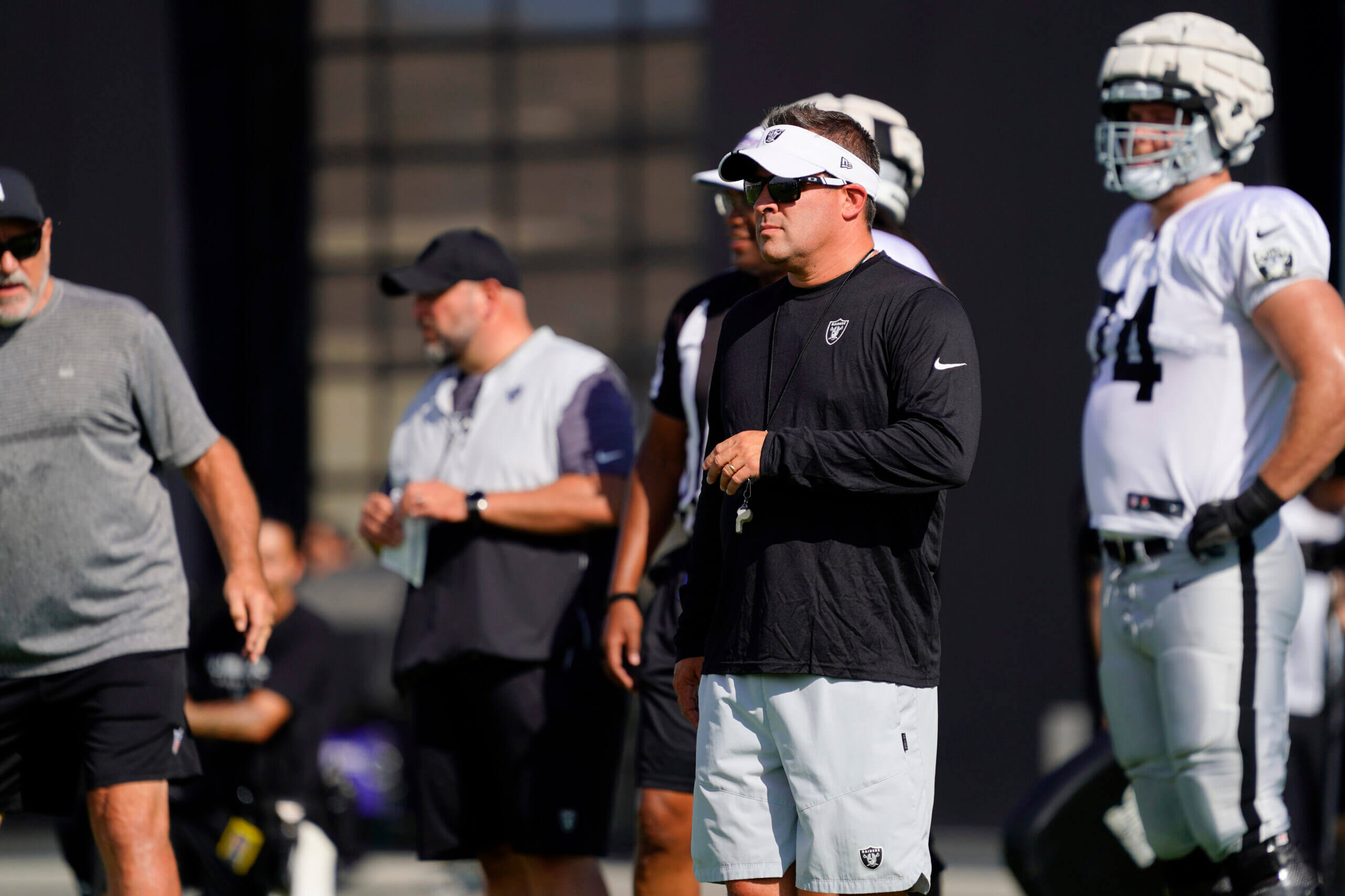 McDaniels will be looking for which players have picked up on the fundamentals, scheme recognition and communication that the staff has been stressing at training camp. And obviously which players are the most aggressive and make plays.

Without further adieu, the five players whom we will be focusing on Thursday night:

When the Raiders run that triple-reverse against the Jaguars in November, Johnson would be the ideal man to give the ball to given his 4.4 40-yard-dash time. The 6-foot-1 Johnson has 22 catches in two seasons with the Chargers, Jaguars and Raiders and has worked hard on his receiving skills to show the coaches that he is more than just fast.

He has had a very good training camp, and his confidence is apparent while watching him from the sidelines. Johnson needs to carry that over to the preseason if he has any shot at beating out either Demarcus Robinson and/or Keelan Cole for a roster spot if the Raiders keep only five receivers. (Davante Adams, Hunter Renfrow and Mack Hollins are locks.)

“I’m really proud of him,” McDaniels said. “Everybody knows he’s fast, but it takes a lot more than being fast to play in our league at that position, and he’s working extremely hard to be prepared. He knows what his assignments are. He has been able to really connect with the quarterbacks and different things. … He takes care of his body.”

Whenever you are one of the draft picks from the previous coaching staff, it can be an uphill battle to make a meaningful impression on the new coaches. Just ask Alex Leatherwood, Clelin Ferrell and Johnathan Abram.

Koonce was a third-round pick by Jon Gruden and Mike Mayock and had two sacks in five games last season. This year, the only time he was visible at camp was when McDaniels yelled at him for getting too close to Carr during one drill. Players such as Gerri Green and Tashawn Bower have lined up outside ahead of Koonce, even after the season-ending injury to Kyler Fackrell seemed to give Koonce some new life.

The new staff likes Koonce’s quickness but questions if he is strong enough to hold up on the edge in their system. Koonce has four games, starting Thursday, to show them that he is. 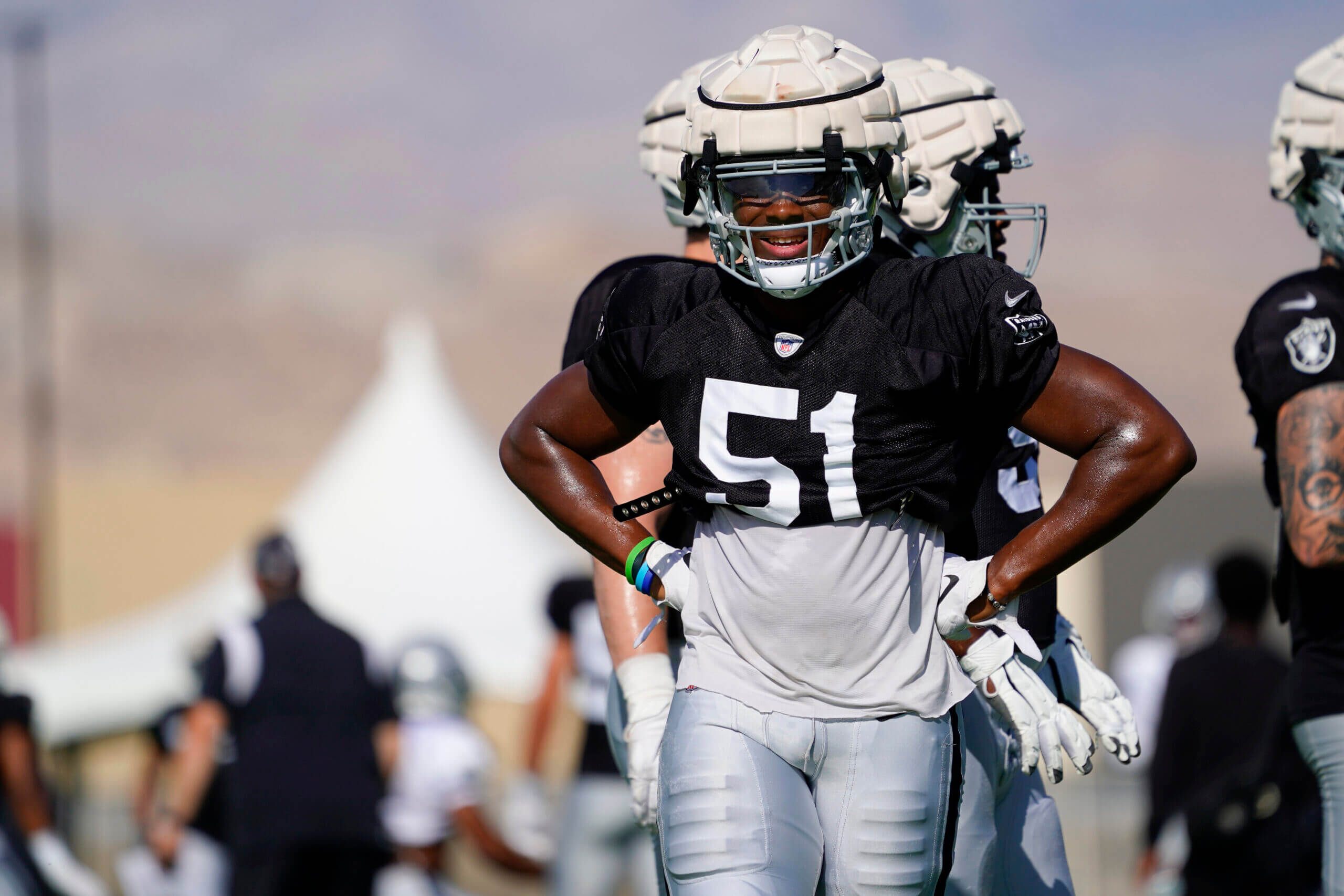 Malcolm Koonce has to earn his role as a reserve pass rusher. (Lucas Peltier / USA Today)

Let’s look at some rookies — running back Zamir White would head the list, but we’re not sure he will play as he has been back for only a few practices after being nicked up and missing the first week of camp. Farrell has been under the radar thus far, but the staff is excited about his run-stuffing ability and maturity. Johnathan Hankins and Bilal Nichols are out with injuries, and the trickle-down effect should mean a lot of snaps for Farrell this preseason.

Our super sleeper (undrafted player who we think will make the roster) is wide awake and has even gotten some first-team snaps because of the injuries to Fackrell and Micah Kiser. Linebackers coach Antonio Pierce brought Butler with him from Arizona State, and he has been all over the field at camp. He should make a good first impression on fans against the Jaguars.

The 5-foot-8 Hall did everything at Ball State, from catching the ball, running it, handling kick returns, washing the towels and cooking up the postgame spread. Even if the Raiders feed Hall the ball this month, he is a long shot to make the roster. But he has turned some heads with his kick returns at camp and some guys just make plays, regardless of how big they are. We’ll see if Hall is one of those guys.