GAINESVILLE, Fla. — The first practice of Florida’s preseason camp featured a 15-minute observation period and a twinge of dread.

Arizona State transfer Ricky Pearsall, who figures to be a key piece of the passing attack at slot receiver, came up hobbling after making a route cut. He met with trainers as the media departed, but a team source said Pearsall later returned to practice.

Aside from the quarterbacks, the only players in black non-contact jerseys were left tackle Richard Gouraige, tight end Jonathan Odom and safety Dakota Mitchell. Odom, who is recovering from a torn labrum sustained in the spring, accompanied the tight ends during individual drills. Gouraige and Mitchell worked at the indoor facility with Joe Danos, the team’s new director of player athletic development, who described his job as being a bridge between the rehab and return-to-play process.

“One of the really important things is to make sure the guys are working all those areas of their body that are healthy,” Danos said this spring. “Working them aggressively and really keeping the body calloused, if you will, so that when they do get turned back over to the full program, it’s a smooth transition. You can take things kind of easy and almost a vacation when an injury happens, or you can train aggressively and make sure we’re training hard around that injured area.”

The start of training camp saw players relocating to a team hotel, which meant Gervon Dexter had to say goodbye, temporarily, to his 13-week-old son, Gervon Jr.

“That was probably one of my saddest days leaving him,” said Florida’s hulking defensive lineman. “I can’t even explain how good it’s been for me being a father.

“I’m sure some of you guys know if you have kids, it’s not about you anymore, it’s about him now. Everything I do now is trying to set his life up for the better.”

Dexter lost his father, Gerald, in April 2020 at age 50. That was months before the five-star recruit played his first college game. The player’s locker features a framed photo of his dad.

While Dexter is a draft-eligible junior with early-round potential, his rawness still shows. Through 25 games and 11 starts at Florida, he has 2.5 sacks and 5.5 tackles for loss. With third-round pick Zach Carter moving on to the Bengals, Dexter needs to ramp up his production on the defensive interior, shifting between tackle and strongside end.

An opposing SEC coach told The Athletic in May that Dexter “looks like he was made in a lab” at 6-foot-6 and 310 pounds. But that coach said Dexter’s struggles with pad level help offensive linemen move him “two gaps away from where he’s supposed to be.”

The pad level problem is being addressed during drills by new position coach Sean Spencer, who joked about putting Dexter in the metal chute without a helmet in order to get him to fire off low.

“If someone’s pads are a little high and they make the play, you can’t commend them on making the play because the pad level is not what you wanted,” Spencer said. “So the expectation has to be that of such each play.”

Having coached former first-round picks Leonard Williams and Dexter Lawrence with the New York Giants the past two seasons, Spencer said Dexter has a combination of their abilities.

“He can do some things in the short area with his quickness,” Spencer said, “and he’s got good length — all those things that can really create one-on-one pass rush moves.”

Dexter credited Spencer with a game-changing approach during a month of spring practice, and says, “Imagine what four or five months could do.”

The stamina and weight of nose tackle Desmond Watson will be constant factor in determining whether the sophomore steps into a starting role. He enrolled at Florida last year weighing 432 pounds, played as a freshman at 400 and begins this preseason listed at 415.

“He has really bought into doing what he’s supposed to do off the field to get him himself right to play,” Spencer said. “If you watch the guy he can move at that size. I mean it’s pretty incredible. It’s like a wonder that he can move like that.”

Watson’s mass makes him hard to move in the middle, but he struggled with down-the-line pursuit during the spring. A slimmer version of himself, say, in the 380 range, could help his quickness off the snap and lead to more penetration plays.

“He can hold points and do things like that, but what we’re trying to do with Des is not make him a guy that’s just a two-gap stop guy,” Spencer said. “We’re trying to make that guy a complete football player.” 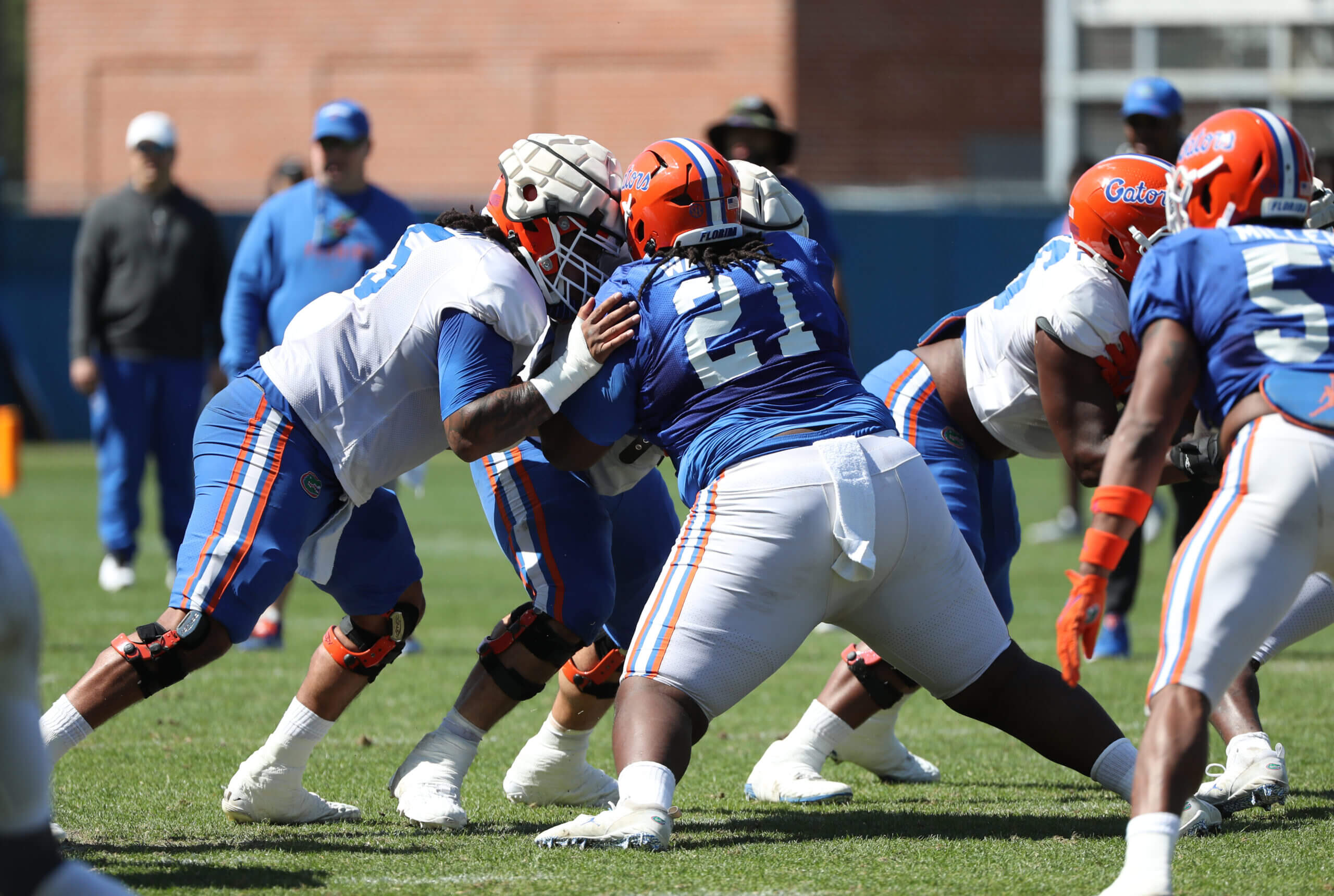 Nose tackle Desmond Watson was a three-star recruit in the Class of 2021. (Isabella Marley / UAA Communications)

Offensive line coach Rob Sale called Tarquin “a stud when it comes to his attitude” and lauded his impact on freshmen like Jalen Farmer, David Conner and Christian Williams.

“I’ve got three young pups that are in here and I kind of throw it back on them sometimes: ‘Hey, name a player that you think does it the right way.’ And Michael Tarquin’s the first one that comes into mind,” Sale said. “I’m very pleased with Michael. Obviously we’re expecting big things from him this year, but he’s going to answer the bell.”

In four seasons under Dan Mullen, the Gators averaged between 2.22 and 2.29 offensive plays per minute. The range for Napier at Louisiana was 2.25 to 2.36.