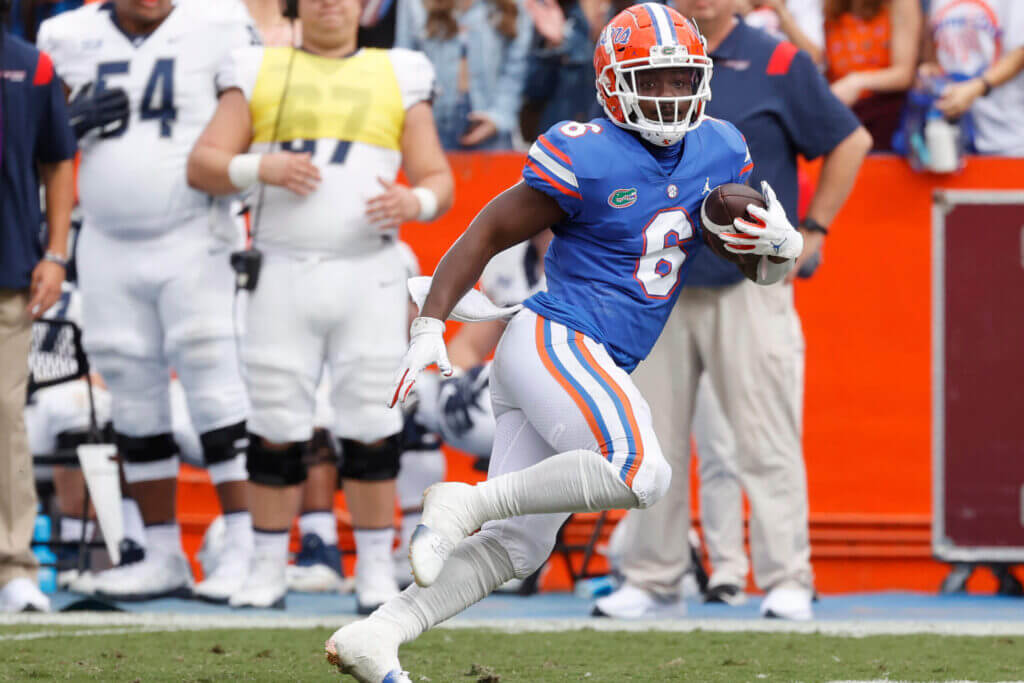 GAINESVILLE, Fla. — Seventy-six seconds shy of halftime and four feet away from the Florida State sideline, Nay’Quan Wright felt the shock of his lower left leg being twisted and pinned beneath a 230-pound linebacker.

From the turf to the X-ray machine, Wright’s day and sophomore season were finished. While there was nothing comforting about viewing an image of his own ankle fractured, at least this time Wright recognized what he was looking at: “I knew I was going to have to get a couple plates and screws.”

The running back had undergone surgery before, having broken the opposite ankle before his junior season at Miami-Carol City High School. The injury erased a year of action along with several scholarship offers, even though he emerged faster and shiftier than ever.

He dedicated himself to making the same comeback after the FSU takedown. Next-day surgery put Wright on an expedited path to recovery, just not as expedited as he hoped. Wanting to impress Billy Napier and position coach Jabbar Juluke, Wright insisted, “I’m ready to go” for spring practice, yet he couldn’t get cleared. Good thing. He admitted Friday that he was fooling himself in an attempt to “keep it positive.”

Somehow, a running back who wasn’t able to run managed to sway his new coaches nonetheless.

“Nay’Quan is one of the players I respect the most on our roster,” said Napier, moments before Wright joined the Gators for their third practice of preseason camp. “I think he is real. I think he lives life with integrity. He is who he says he is.”

Integrity may not help Wright dodge tacklers, but it’s an intangible Napier craves in his mission to construct a winning culture.

“This place means something to him,” Napier said.

#Gators RB Nay’Quan Wright on freshman enrollee Trevor Etienne: “I like the kid. He doesn’t toot his own horn.”

But others are tooting his horn in this story.https://t.co/6Pr4HKdmL8

Through the first week of observation periods, Wright has looked agile and bouncy and doesn’t appear to be favoring the rehabbed ankle. Part of that can be attributed to offseason training under Tiger Jones, the staff’s new director of speed development. Even for Wright, a former track athlete and a running back entering his fourth season of college ball, the science of improving technique has been educational.

“Coach Tiger, he knows the body,” Wright said. “I thought you just could run, you know what I mean? He just teaches you how to run, your form, your knee drive. ‘Kick down, don’t kick back, don’t kick out’ — that’s how you pull your hamstring, kicking out. Just learning the fundamentals of how to run.”

Wright essentially was the fourth option in Florida’s backfield last season, behind Houston Texans draft pick Dameon Piece, senior Malik Davis and quarterback Emory Jones. With 76 rushing attempts and 14 catches, Wright touched the ball on roughly one-tenth of the Gators’ 911 offensive snaps. He’s projected to play a larger role this fall, not just because of seniority. After June’s transfer of Demarkcus Bowman to UCF, the roster features only four scholarship running backs — the minimum most programs prefer to carry at a position that tends to get banged up. (Alabama, for example, enters camp with six scholarship running backs and Georgia carries five.)

Wright is part of Florida’s mostly unproven backfield. Montrell Johnson had a promising 838-yard freshman campaign at Louisiana but had only six carries against Power 5 competition. Lorenzo Lingard has only 17 touches in two seasons since transferring from Miami. New four-star enrollee Trevor Etienne could provide an impact, but how soon?

“Nay’Quan’s one of the players on our team who has a voice, who does have an impact,” Napier said. “Certainly for him to get healthy and have an opportunity to be effective on the field and produce on the field is really healthy for our team. Nay’Quan is on schedule. We’re excited to have him back out there.”

The highlight of Wright’s college career so far was his production on a 99-yard drive against Alabama last season. He touched the ball five times during the 11-yard march, starting with an 18-yard catch on third-and-10. He tacked on runs of 30, 16 and 11 yards.

“That just gave people a little bit of my game,” he said. “I feel like I haven’t enough. I have a lot more to prove.”

Defensive lineman Chris Thomas, who was among a group of players trimmed from the roster in late June, rejoined the Gators this week. Napier remained vague about the circumstances surrounding Thomas’ time away from the team.

“Just some internal things there from a logistical standpoint relative to his role on the team and his eligibility and ability to participate with the team,” Napier said. “Some of those things have been cleared up. Those things took time. Obviously, we’ll keep the details in-house there, but we’re happy that Chris is back with us.”

While Thomas wasn’t projected as a member of the two-deep after spring, his presence adds depth to a thin unit. The three-star 2021 signee from Fort Myers, Fla., made one appearance last season in the Gasparilla Bowl.