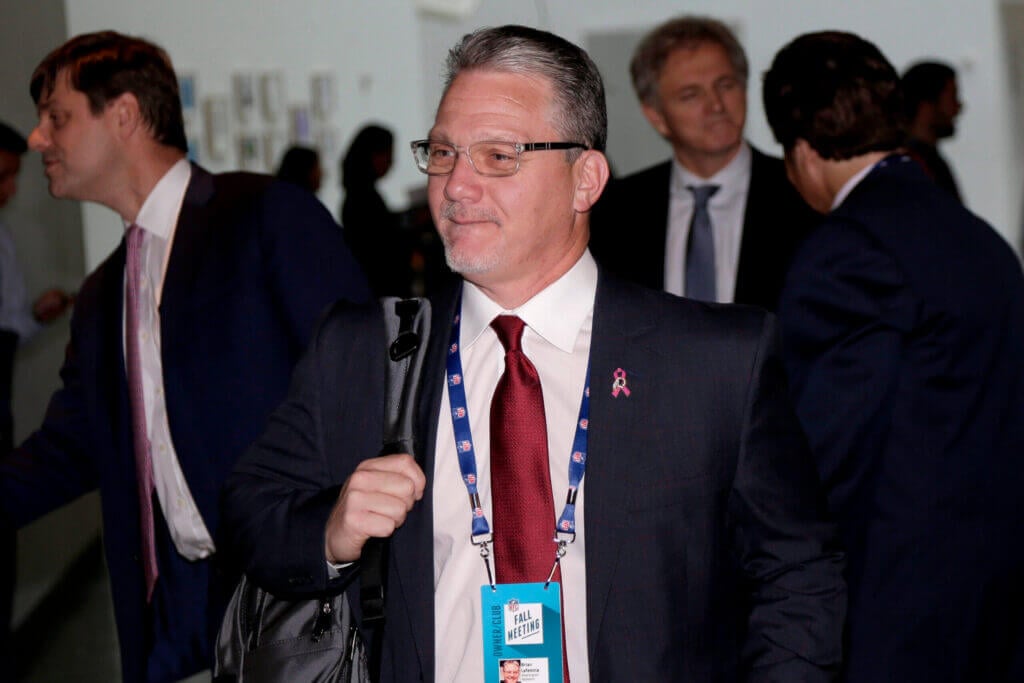 Former Washington Commanders president of business operations and chief operating officer Brian Lafemina claimed he engaged in two years of arbitration with the team over what he described in an interview with Congress as “false allegations” that led to his late 2018 ouster after only seven months on the job.

A former NFL executive, Lafemina’s move to Washington was big news in May 2018, as was his short tenure. Now the chief business officer for the organizing committee for the 2028 Summer Olympics, Lafemina has never spoken publicly about his time in Washington, but the House Committee on Oversight and Reform subpoenaed him to testify privately as part of its investigation of the Commanders and owner Daniel Snyder. This week, the committee posted a 240-page transcript of its interviews with the former executive.

Lafemina, who declined The Athletic’s request for comment, did not tell investigators the outcome of the arbitration, which ended in 2021. The Commanders did not respond to questions about Lafemina’s testimony.

Lafemina told Congressional interviewers the team fired him “for cause,” a distinction used by an employer to get out of fulfilling an employee contract. He said the team accused him of leaking information to the media about Washington’s controversial signing of Reuben Foster, a linebacker cut by the San Francisco 49ers after his arrest for domestic violence allegation.

“They made many false allegations as to the rationale for why they fired me,” Lafemina told the committee. “You know, the fact they claimed to fire me for cause, which they had no cause. … They accused me of leaking stories to the press, which I never did, and that was one of those rationales.”

While many reports at the time blamed then Commanders president Bruce Allen for pushing Lafemina out over a turf war in December 2018, Lafemina pointed to Karl Schreiber, the CFO of Snyder Enterprises since 2008.

“(Schreiber) disagreed with the strategies we were putting in place,” Lafemina told the committee. “And he thought that we were not very — not very accomplished at our jobs.”

Schreiber did not respond to queries put to him through the team about Lafemina’s allegation.

One of those strategies was the widely publicized decision to do away with the team’s season-ticket waiting list. Despite getting the credit for this action in news reports, Lafemina said the decision to do away with the list had been made before he arrived at the end of May 2018. In fact, he said, the head of ticketing, Jake Bye, who arrived at the team shortly before Lafemina, made that move a condition of his, Bye’s, hire. Bye, who made the decision to ax the waiting list, left the team shortly after Lafemina and is now an executive with Learfield. Bye declined to comment.

Lafemina told Congress he had recommended the decision from his perch as head of club business development at the NFL and only implemented it when he arrived at the team.

“Those who had less than an understanding believed in some way that the wait list made it seem as though there was more demand for tickets than there actually was in the marketplace,” Lafeminatold the committee. “And that it was an effective marketing tool to let people believe that there was scarcity when none existed.”

In reality, he said, the team’s ticket sales office was turning away fans trying to buy single-game tickets if they were not on the waiting list.

Snyder offered Lafemina a job with the team in an unusual way after the owner and some of his executives came to the league office to discuss the team’s declining business fortunes, a trend that has dropped the club to the bottom tier of NFL franchises based on revenue. In that May 2017 meeting, Snyder seemed unconcerned by the team’s business metrics, Lafemina said.

“I told him that, you know, his team was in a downward spiral, and he laughed and sort of made light of it,” Lafemina told the committee. During a break in the meeting, Lafemina was showing Snyder the way to the bathroom when the owner suddenly asked him to come work for him. “I was walking somebody to the men’s room and they asked me if I wanted to go be the president of a football team,” Lafemina testified. “So that was surprising.”

Lafemina said it took him a year to accept in part because so many people warned him about working for Snyder.

Shortly after coming to work for the team, Lafemina said he realized what a herculean task of changing the team’s culture lay in front of him when Ana Nunez, then a suite sales associate, asked him if her group would be allowed to go to lunch. She explained under recently ousted boss Dennis Greene, no one in the sales department was allowed to leave their desks for lunch.

“She said, ‘No, we’re not allowed to go to lunch,’” Lafemina testified. “‘Dennis tells us to sit at our desk all day long. We’re never allowed to leave.’” Greene could not be reached for comment.  He did not reply to a message sent to him via Facebook.

Lafemina testified that he did not witness any incidents of sexual harassment firsthand, but that his reports told him Rachel Engleson, director of marketing, had said team broadcaster Larry Michael made her uncomfortable by referencing her appearance and touching her face. Lafemina said he called Snyder with the information in 2018, and the committee’s Majority blared out Snyder’s reply in a press release this week, that “Larry was a sweetheart and that Larry wouldn’t hurt anybody.”

Michael retired in July 2020, shortly after the Washington Post’s damning expose of the team’s culture. “It was obvious that he was fond of Larry and that he thought that Larry was well-intentioned and that he didn’t want anything bad to happen to Larry,” Lafemina testified.

While Lafemina placed significant blame on Schreiber for his termination, he also testified that Snyder and Allen did not like all the positive press he was receiving.

“When we came to town, myself and the folks that I recruited, we were getting very positive press attention, and other people in the organization, Bruce Allen specifically, the owner, were not,” Lafemina said. “They were getting very bad press attention. I think there was an incredible amount of jealousy and animosity from some people who had been close to Dan over a long period of time and muddied the waters. And so I think those are the reasons that ultimately I was asked to leave.”

Lafemina told the committee Schreiber and general counsel Eric Schaffer hand-delivered his termination letter to him in his office the day after Christmas, 2018.