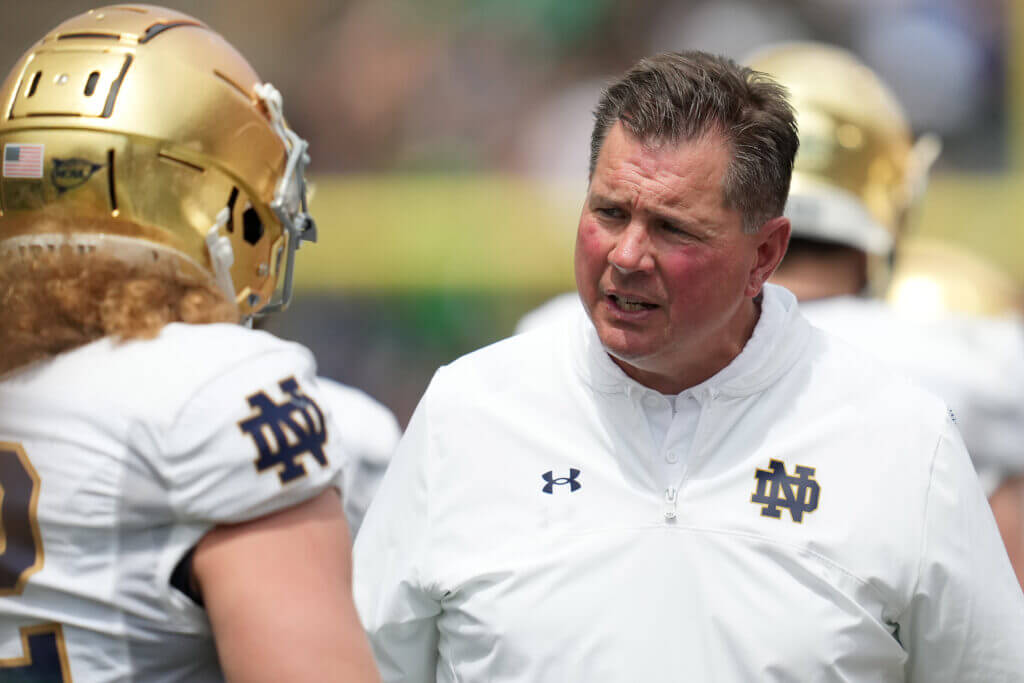 SOUTH BEND, Ind. — Marcus Freeman blew a kiss to four of his kids as he crossed one practice field to another, leaving the offensive side for the defensive side while passing some family members in-between. Once he arrived near midfield, the head coach observed the linebackers while position coach and coordinator Al Golden shuffled his feet and navigated himself in front of tackling dummies.

Marist Liufau, JD Bertrand, Nolan Ziegler and Will Schweitzer stood at attention as the 53-year-old Golden, a two-time head coach and one-time finalist for the Notre Dame head coaching job that went to Brian Kelly, demonstrated proper technique on an unseasonably refreshing early August morning. That his audience included the current Irish head coach, all of 36 years old, illustrated the uniqueness of the dynamic at play here.

It’s that they have all come together from various places to various roles and are assimilating on something of equal footing, given the familiar names and numbers that have transcended the constant turnover at the head of the Irish linebackers room.

“You never want to be a coach having to coach effort,” Laurinaitis said. “We’ve got enough technique and fundamentals and scheming to do that teach you to run to the football. So those guys handle all those things and we have a really good group of players.”

Laurinaitis was a three-time consensus All-American who spent seven years in the NFL. He left a burgeoning media career to essentially start from the bottom as a coach. He was a surprise appearance at interviews after the Irish’s fourth camp practice, and while experience hosting a three-hour radio daily show made him an excellent interview, it also prompted an Irish official to set a time limit once he sat down to speak Monday.

“I got GA stuff to do,” Laurinaitis said, humbling himself.

If that were not enough to remind him of how far removed he is from his glory days as a player, perhaps Jack Kiser saying that he used to play with Laurinaitis in the old EA Sports video game was.

Laurinaitis, of course, was a linebacker at Ohio State with Freeman, his new boss. Or, more specifically, his new boss’ boss.

Not that there has necessarily been a pecking order among this group so far.

“Coach Golden and these guys, they have the utmost respect for us and they want the best for us, but it comes down to it’s a player-led program, right?” fifth-year linebacker Bo Bauer said. “So coach Golden, man, he lets these guys here, we lead what our unit’s going to look like, what the defense is going to look like. He’s not the one out there in the huddle saying, like, ‘Hey, we’ve got to do this.’ He’s like, ‘Hey, Bo. Just go.’

“He doesn’t have to tell me what his thoughts are. I just know, so it’s just a really good connection with him.”

Turnover can be challenging, sure, but the last two guys got bumped up to Power 5 head coaching jobs, one of those, of course, being Freeman. Golden has been in those shoes as well, before a six-year NFL stint that culminated in a Super Bowl appearance as the Bengals’ linebackers coach.

“They’ll say some things and it might go back to Clark’s system,” Golden said of his current pupils. “They’ll say something and I’ll be like, ‘Oh, that’s a great idea.’ That kind of thing. You’re almost like riffing with them because they’ve been through it and they’re a smart group.”

Bauer, Kiser and Bertrand are all entering their fourth or fifth season after playing in every game last season. Liufau, also back for a fourth year, was expected to start last season before an ankle injury in camp shelved him for all of 2021.

No one has grown too big for their britches, least of all the man with the highest payroll of them all.

“You’ve seen coach Freeman make an effort to be here and be present in every aspect that you can,” Kiser said. “Like, heck, the dude was flying all over the country and would be back here in the weight room the next day, just showing an appearance, making sure that we knew he was part of this brotherhood. I think that’s extremely important.”

Kiser said the offseason has been as much about empowering the younger guys to hold the old heads accountable as it’s been about the coaches directing the upperclassmen.

It’s a heck of a place to start for a program undergoing a regime change and opening on the road against the No. 2 team in the country.

“It’s a blessing to have guys like that that will teach you and you have an opportunity to learn and then hopefully challenge those guys at some point,” Golden said of the younger players.

“I’m so blessed, man,” Laurinaitis said of working with the older folks.