This weekend, TPC Craig Ranch is host to one of the biggest golf tournaments that come through the Dallas area, the AT&T Byron Nelson. In other years, many Stars players may have headed out there in the sweltering Texas heat, or scheduled their own rounds.

Instead, the Stars will look to put out the Flames in a decisive Game 7 on Sunday in Calgary.

“We’re supposed to be on a golf vacation right now but that wasn’t our intention going in,” head coach Rick Bowness said. “We didn’t get in the playoffs to be somebody else’s stepping stone for the second round. Here we are going to Game 7, so our guys deserve a lot of credit.”

When a best-of-seven series boils down to a single game, strange things tend to happen. The Stars are familiar with this, having played in three Game 7s within the past decade: The Game 7 blowout loss to the Blues in 2016, the Jamie Benn double-overtime wraparound fail to the Blues in 2019 and, most recently, the Joel Kiviranta hat trick against the Colorado Avalanche in 2020.

Many of the players on the current Stars roster were there for the 2020 game and many were around for 2019 as well. A few have been around since the 2016 debacle, too. The Flames have players who have experience in these situations elsewhere, but the Flames as a team haven’t had a Game 7 since they were eliminated by the Sharks in 2008, courtesy of Joe Pavelski’s game-winning goal.

“It takes a lot,” Flames head coach Darryl Sutter said about his team’s ability to close out a series. “Some guys are still learning how much it takes.”

Taking a quick look back, it’s hard to ignore how much of a role the Coyotes have played in the Stars’ path to reaching Game 7 of the first round.

It began at the trade deadline, when the Coyotes dealt goaltender Scott Wedgewood to the Stars for a third-round draft pick. How has the backup goaltender, who hasn’t played a minute in the playoffs, helped the team in the postseason? In a pretty significant way, actually.

Wedgewood has been solid for the Stars since he came over. In his first game, he stole two points in Carolina and, less than three weeks later, he shut out the Tampa Bay Lightning. At a time when each point mattered to simply punch a ticket to the playoffs, Wedgewood earned the Stars at least one point in six of his seven starts. But his contribution to the Stars’ postseason success goes beyond his regular-season efficiency.

Late in the season, the Stars’ goaltending depth had been decimated. Ben Bishop unofficially retired in December, Anton Khudobin underwent season-ending surgery and Braden Holtby’s season was hampered by an injury. The Stars were overworking Jake Oettinger. Prior to acquiring Wedgewood, Oettinger had started 19 of 21 games, with a couple of Holtby starts sprinkled in. In Oettinger’s first 26 games of the season, he went 17-6-1 with a .923 save percentage. In his last 22 games, Oettinger was 13-9 with a .905 save percentage.

Clearly, the workload was beginning to take a toll but Wedgewood’s arrival created balance. Wedgewood started seven of the last 20 games, allowing Oettinger to get some much-needed breaks and be ready to roll when the playoffs began. Through the first round of the postseason, Oettinger has been the best goaltender in the NHL, posting a .954 save percentage, which is 0.11 percent better than second-place Jacob Markstrom. Without Oettinger, the Stars would not be pushing their first-round series to seven games, and there’s an argument to be made that without the Wedgewood trade, Oettinger wouldn’t be as dominant as he’s been.

The Coyotes also helped set the first-round matchup for the Stars. On a smaller scale, they were the team the Flames beat 9-1 on April 16 to officially clinch the postseason before they clinched the Pacific with a 4-2 win over Dallas five days later. But the greatest impact was the final day of the regular season.

The Coyotes went down 4-0 to the Predators and nothing but a Coyotes regulation win would have taken the Stars to Calgary instead of Colorado. Two days after erasing a three-goal deficit in Dallas, Arizona scored five unanswered goals to beat the Predators in regulation and change the Stars’ first-round opponent to Calgary. Had the Coyotes not mounted that furious comeback against the Predators, would the Stars be playing a Game 7 in Colorado? It’s not impossible. After all, the Flames were heavily favored and the Stars have forced it against them, but given the firepower the Avalanche have and the way they dominated the Predators in the sweep, the chances would have certainly been lower. 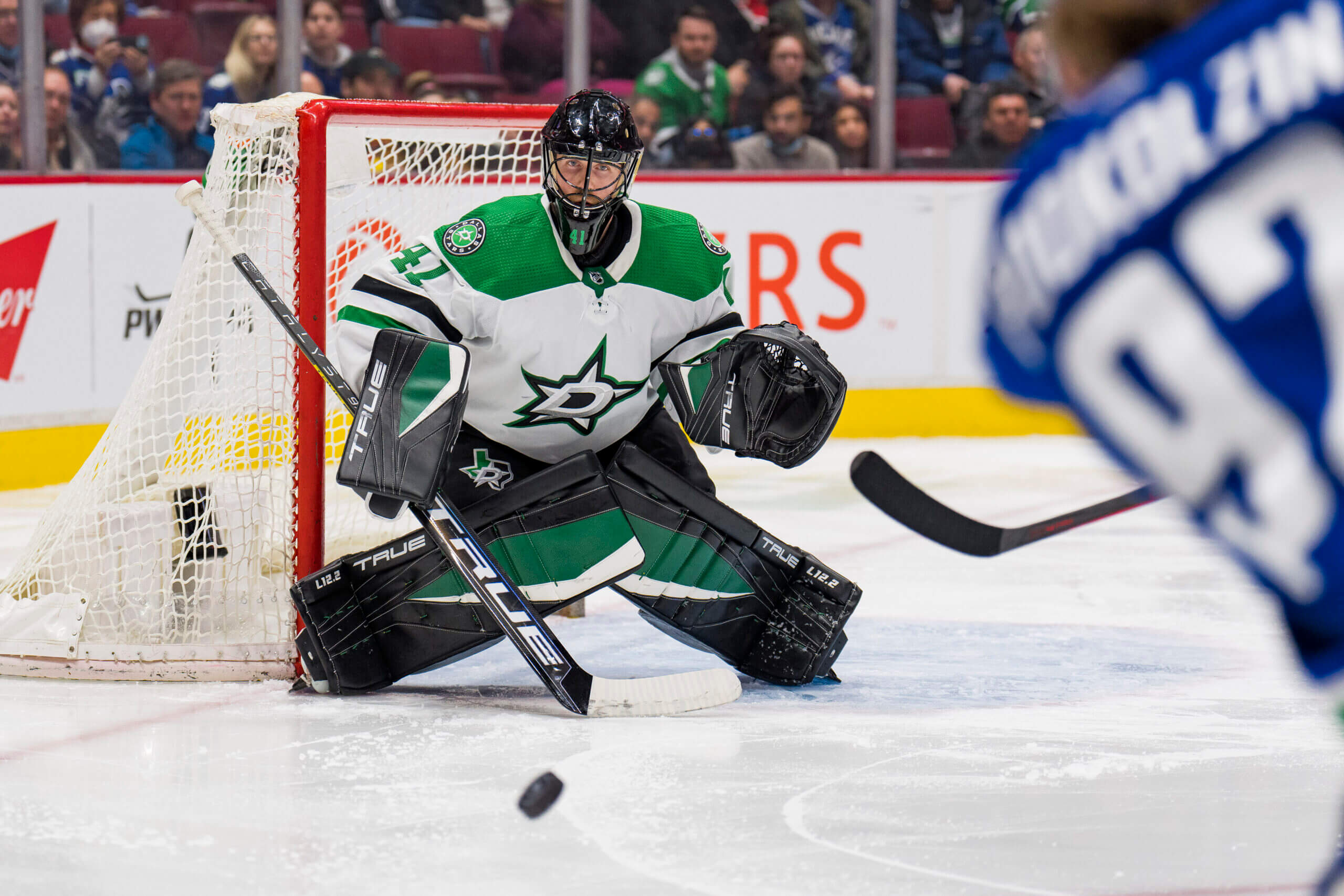 When the Stars’ front office members talked about being built for the playoffs during the regular season, they were talking about roster construction and style. The Stars have a defensive identity that relies on solid structure in front of the goaltender and then a really good goaltender. Oettinger’s production through six games is the bottom-line reason the Stars are still in this series.

Keeping the score down, in and of itself, isn’t what “style” is about, though. After all, if that was the case, the Flames wouldn’t have had too much trouble with the Stars, given no team in the NHL this season allowed fewer five-on-five goals and they have a goaltender who is a Vezina Trophy finalist.

The Stars like to live dangerously. They are strangely comfortable playing with fire, pun intended, and they’ve forced the Flames to play to the Stars’ pace as opposed to the Flames’ preference. What does this mean? This season, the Stars played the third-most minutes of any team with the score within one goal. They were only 13 minutes behind the Los Angeles Kings for the No. 1 spot in the league in that category. The Flames check in at No. 17 on that list.

Of the eight first-round series, none has been played with the score within one goal for more time than the Stars and Flames. If you only count regulation, eliminating the triple-overtime contest between the Rangers and Penguins, it’s not even close. According to Natural Stat Trick, only 18 minutes of the Stars and Flames series has been played with the score being a multi-goal deficit. The Stars are used to that while the Flames, not so much.

Regular-season circumstances also prepared the Stars for this kind of series. For one, the Central Division was a tougher slate to get through this season than the Pacific. And after the deep hole they dug themselves into at the start of the season, the Stars have had some sort of playoff urgency going back to November. That playoff-type intensity only ramped up in March and April, when the Stars were in a fight for their playoff lives while the Flames were skating along fairly comfortably. The Stars were already close to playoff intensity when the series began while the Flames were almost two weeks out from playing a meaningful game.

These were all known facts going into the series but Calgary was still the heavy favorite because the goaltending advantage looked to favor the Flames, and most expected Calgary’s significant advantage in skill to be too overwhelming for the Stars. It could have been — and still could be in Game 7 — but that hasn’t been the case through most of the six games because the Stars have been able to impose their brand on the Flames, more than vice versa.

Michael Raffl had a short and direct answer when asked what Game 7 will be like.

Game 6 was a Game 7, of sorts, for the Stars because they were facing elimination, just as they are again. The two feelings, though, aren’t quite the same.

“One team is done, one is moving on,” Jamie Benn said. “Game 7s are a great opportunity for somebody to be a hero. Pretty excited to play in that building one more time.”

Even though the Stars are approaching it as if it’s their series for the taking, which is exactly how you would expect and hope for the players and coaches to look at it, the pressure is all on the Flames. The Stars are still the team that snuck in with a negative goal differential in the regular season. They’re the road team coming into a hostile environment. By most outside accounts, they’re the ones playing with house money.

The Flames are the team that finished with 111 points and atop their division. They’re the team with a Vezina finalist and a player who was in the Hart Trophy conversation. They’re the ones playing in front of the home crowd. And while it’s not all on this season’s group, they’re a franchise that hasn’t won a playoff series since 2015 and has only reached the second round once since 2004.

The formula for the Stars is pretty simple. They need to take the good things they’ve flashed throughout the series and bring it all together for one big performance. Oettinger needs to continue doing what he’s done. Jason Robertson needs to maintain his newfound groove and his linemates, Pavelski and Roope Hintz, need to be at their best. The depth scoring that flashed in Game 6 needs to carry over, from the forwards and the defensemen. The power play that showed signs of life on Friday needs to bloom.

Haaland will be happy at Manchester City even if I don’t stay, says Guardiola

Game 7: Stars’ path proves they aren’t ‘stepping stones,’ but can they finish?