ATHENS, Ga. — Kirby Smart doesn’t want his players to dwell on being national champions, move on and turn the page and all those other appropriate phrases. There are, however, marketing considerations to consider: The special edition Georgia national champion Coke bottle was placed on the podium for Smart’s preseason news conference Thursday, and when it was over, a marketing staffer was outside giving away bottles.

And once out at practice, Smart put things in a more colorful way, after a period that apparently didn’t go to his liking: “Horse-SHIT! Coaches, if your guys can’t do the plays, sit them down with the trainers.”

Smart later told one of his star receivers to “suck it up” and sarcastically asked one of his star tight ends: “Is this a walk-through?” Still, as you walked around, taking in the sights and sounds, it occurred that this was a practice for the defending national champions.

Then you looked up at a T-shirt, worn by one of the student assistants, with large bold letters: “NOBODY CARES.”

Georgia released the full details on Kirby Smart’s contract extension, and they further show how financially committed they are to their head coach.https://t.co/qAU1dGAKdR

Here’s what else stood out as Georgia began practice Thursday:

Mondon has made a move

Georgia needs to replace its three top inside linebackers — all of whom went in the first three rounds of the NFL Draft — and coming out of spring, the main buzz was around sophomore Jamon Dumas-Johnson. Now as preseason begins, another sophomore seems on the front of everyone’s minds: Smael Mondon.

“Smael Mondon is as good an athlete as I’ve ever seen,” Smart said.

When that comment was relayed to Christopher Smith, the senior safety’s eyes got wide as he nodded in agreement.

And tight end Darnell Washington also mentioned Mondon first when asked about the linebackers as a whole.

Mondon, a five-star prospect, missed almost all of spring practice because of shoulder surgery but has managed to put on good weight, per Smart, who said he would like to see more physicality and toughness out of Mondon.

While not quite an objective observer, Washington did not downplay the expectations around how Georgia will use its tight ends. When I asked Washington how he would define the tight ends at Georgia, he gave a one-word answer: “Mismatch.”

That’s as much bravado as you’re going to get at a program like Georgia (or Alabama or other programs in the Nick Saban tree). It’s also just stating facts. The main question is to what extent Georgia will exploit those mismatches this season. So I asked Washington that too.

“I’m not really sure how we’ll use it. But we’re all unique,” Washington said. “If you put a speedster like Brock (Bowers) in, and he does his work. If you put a guy like me in, I’m oversized. There’s no linebacker, that I feel like personally, can jump with me. And then Arik (Gilbert), he’s a hybrid; he can do everything he can do it all. Then just keep rotating, break down the defense, pretty much mismatch down the field.” 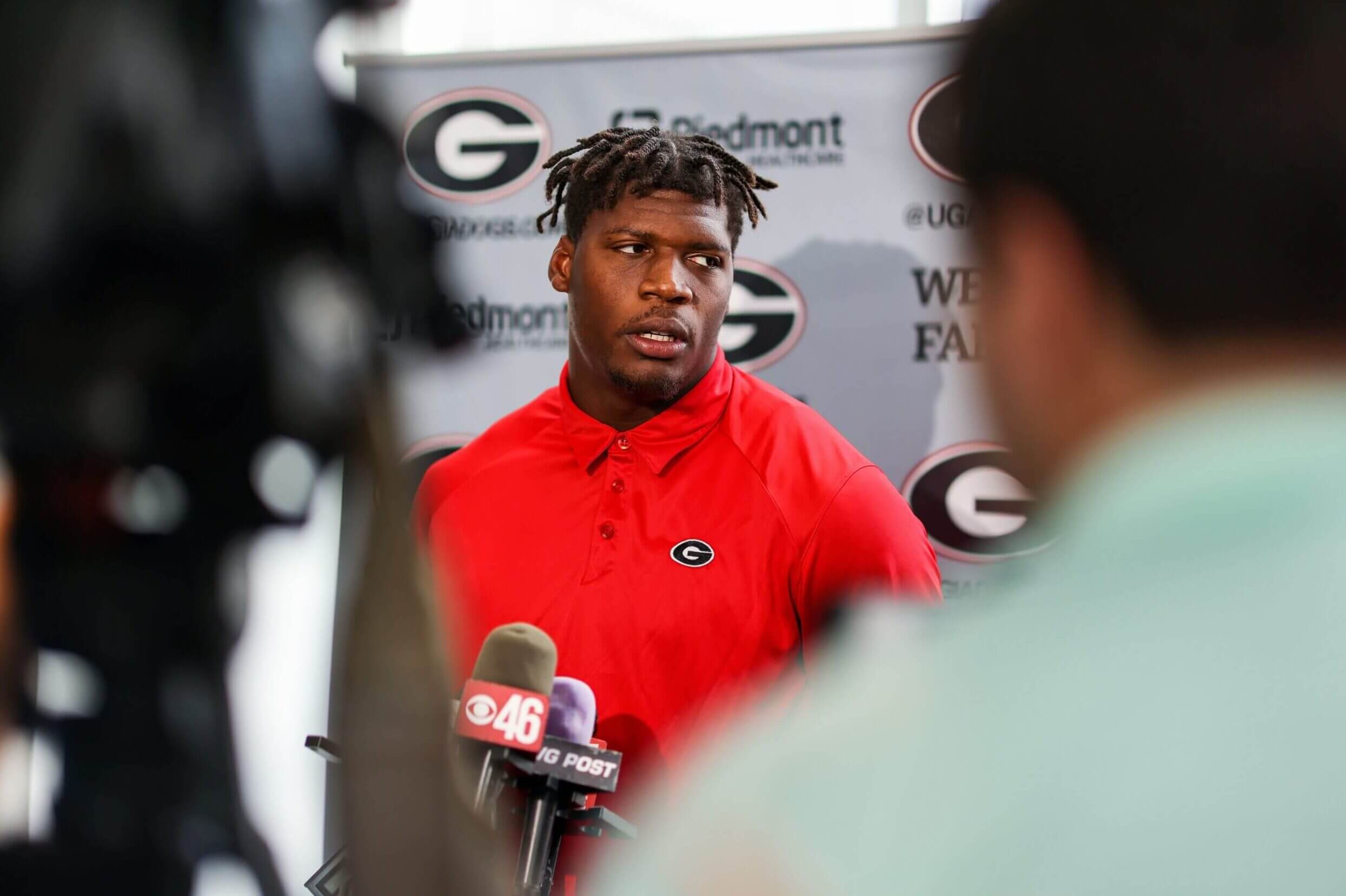 Taking the offense to the next level

Georgia’s offense was already more effective and explosive than most noticed last year, mainly because it was overshadowed by the defense. Now that the offense returns most of the key parts — starting quarterback, skill-position players, most of the offensive line — Smart said it’s not about tweaking but improving.

“There’s not going to be huge changes. What there is going to be is maybe higher execution,” Smart said. “Maybe the capacity to handle a little more information and do a little more than we’ve done in the past because guys are in the second year and third year, some cases, of doing it. So, you know, we’re going to challenge those guys to embrace the thought of doing more and embrace being better at your execution. It’s not what play you call, it’s how much better you do it than they do it.”

Warren McClendon gave an interesting answer when asked about the tailback duo of Kenny McIntosh and Kendall Milton, who are moving into the top two roles this year. They’re seen perhaps as more similar than different, unlike the duo they’re replacing: Zamir White was the power runner, while James Cook was the speed back and open-space runner. But McClendon, the right tackle, thinks McIntosh and Milton will offer a similar contrast.

The X-factor may be Daijun Edwards, the junior who has looked good when playing mostly when the game was out of reach.

“He’s going to play a larger role this year,” said Smart, adding that the coaches want to get a good look this preseason at freshmen Branson Robinson and Andrew Paul.

The key to the offensive line

Georgia seemingly has a chance to have the best offensive line of the Smart era: The 2017 line arguably holds that title right now, with two future first-round picks and three more who were drafted. This year’s line is set at both tackles (Broderick Jones and McClendon) and center (Sedrick Van Pran), all of whom have good ceilings.

The guard spots could dictate whether this line can be good or great. There’s a mix of veterans (Warren Ericson, Xavier Truss), youngsters with promise (Devin Willock, Dylan Fairchild, Chad Lindberg, Austin Blaske) and a high-upside player returning from injury (Tate Ratledge).

“He’s in a good spot,” Smart said of Ratledge, who has been rotating with the first and second teams. “I do think there is a matter of coming back where you haven’t, you know, passed off or twist, you haven’t passed off a stunt. There’s some quick back guys inside that he’s going to take some reps to get that back. But certainly feel good about where he is and his toughness.”

Ratledge was indeed working with the first team at right guard during the media viewing of practice Thursday, with Truss at left guard. Willock and Fairchild were the second-teamers. Earnest Greene, a highly regarded freshman who was pegged as a guard by recruiting services, continues to work at left tackle, where he was with the second team.

Leaning on experience in the secondary

Georgia really likes the freshmen it has in this year’s secondary. The future in the back end seems bright with the likes of Malaki Starks and JaCorey Thomas at safety and Daylen Everette, Jaheim Singletary and Julian Humphrey at cornerback.

But having them be part of the present would not be ideal, even though Georgia does have a need.

“They still got a long way to go to be a viable option to play this year,” Smart said. “I mean, you show me a freshman DB that played in the SEC, I’ll show you a guy that gave up plays. All right?”

Smart can point to his third season at Georgia, when five-star Tyson Campbell started as a true freshman at cornerback and was burned enough that he was eventually benched by redshirt freshman Eric Stokes. (Both ended up being first-round picks.)

That could all be good news for returning players like Nyland Green, a redshirt freshman whose length was evident next to the other cornerbacks at practice. Or other second-year players like Kamari Lassiter and Javon Bullard or even sixth-year senior William Poole.

Where Georgia does appear in good shape is depth: Last year, the team was hesitant to use dime formations because it wasn’t comfortable with its personnel. This year, the Bulldogs have more bodies and should get back Tykee Smith, the West Virginia transfer who suffered two injuries last year, including an ACL in October.

“I wouldn’t say he’s 100 percent. But he’s doing everything we’ve asked him to do,” Smart said of Smith.

As revealed on social media a day earlier, Georgia’s starting quarterback has given himself a buzz cut, part of an effort by some players to “lock in, lock out, lock into camp.” That was in Smart’s words.

Christopher Smith estimated the number of players who cut their hair to be about six to eight. Smith was not one of them, keeping his hair in a twist.

“I’m one of the twist guys,” Smith said, prompting someone to ask who came up with that moniker: “I did, just now.”