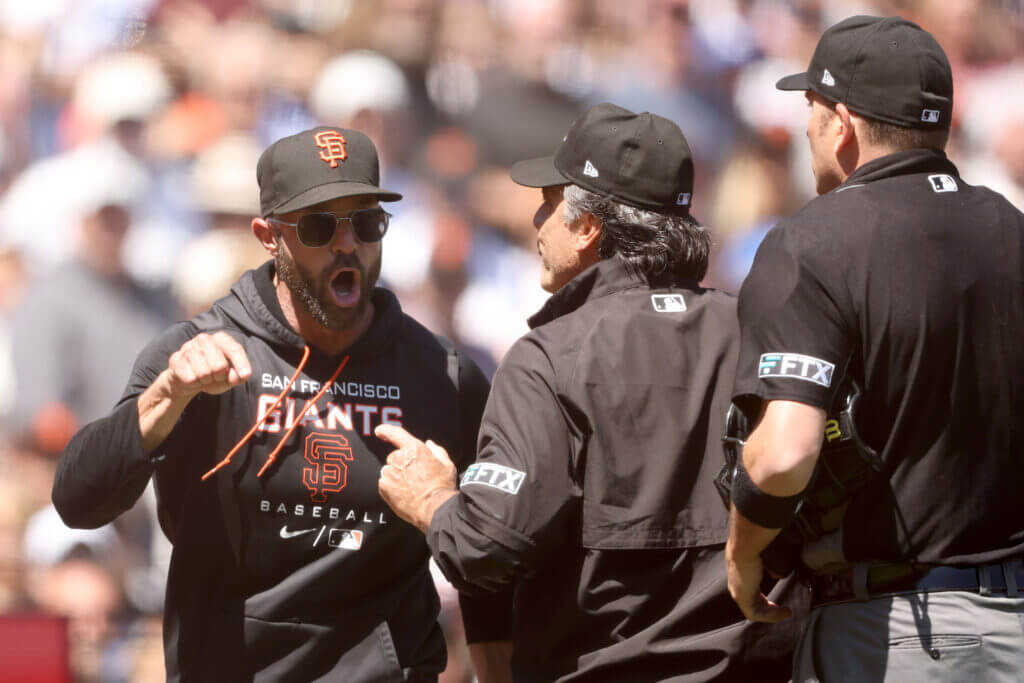 Jarlín García wanted to send the Dodgers a message.

This was a message that didn’t need to be sent last year when the Giants won 107 regular-season games and the Dodgers won 106, when two talented clubs challenged and pushed and exhausted one another, and when a playoff series was decided by the narrowest of margins. It’s the kind of message the Giants have been unable to send to their archrivals this year through all the proper channels: extended rallies, shutdown innings, crisp defense and a favorable outcome on the scoreboard.

“I didn’t do anything,” Betts said. “It was all surprising to me.”

Surprising yet predictable. There is only so much a group of ballplayers can take when the losses come in waves, when they can’t get out of their own way to win a game, when they’re unable to trust one other to make pitches or plays, when they appear drained of all passion and when the trade deadline further stacked the deck against them. You get better at almost anything with practice. You even get better at losing. The Giants were on top of the world just a year ago. Now it’s like they’ve been swallowed whole. And not everyone will deal with the frustration in a constructive way.

A fiery Gabe Kapler was ejected following Jarlin García’s exchange with Mookie Betts to end the top of the sixth inning 😮 pic.twitter.com/nTdngYWJCw

We’re a long way from April, when so much of the discussion was about the unwritten rules, and how the Giants will play hard to the final out no matter how much they’re ahead, and that there’s no disrespect in running up the score. We weren’t hearing anything about the social decorum of taunting while trailing.

So García got caught up in a moment. And that moment escalated when umpire Phil Cuzzi scolded García after the pitcher had already walked off the field, which led to Gabe Kapler taking exception, which led to his first ejection in three seasons as the Giants’ manager.

Where is that, exactly? Well, the Giants lost 55 games last season. They lost their 55th game on Thursday. The difference now is there are still two months to go.

In their four losses at Dodger Stadium out of the All-Star break, the Giants didn’t lead at the conclusion of any inning. In these four losses in their home ballpark, with the stands streaked in Dodger blue, they led at the conclusion of just three. They were ahead from the bottom of the second inning to the top of the fourth on Thursday, when Betts hit a three-run home run off John Brebbia.

All eight losses were by multiple runs.

It was the first time the Giants have been swept at home by the Dodgers in a four-game series since 1977. It’s the first time the Giants have lost eight consecutive games to the Dodgers in the same season since 1979. And combined with three losses July 25-27 at Arizona, the Giants are 0-11 against NL West opponents since the All-Star break. That’s their longest intra-divisional losing streak since divisions were formed in 1969.

So yeah. It’s perfectly understandable to feel like pounding your head.

Just not the way García did it.

“I just did the same gesture they do when they hit a home run,” García said. “He did that against me the other day when he hit a home run. I just thought, ‘Let me do the same thing.’”

That home run off García was a three-run, tiebreaking shot in the eighth inning on July 21 that came immediately after the Giants had erased a five-run deficit and taken a 6-5 lead in the top half. It was the first game out of the All-Star break. It set in motion all the one-sidedness that would follow.

“We have to realize they’re a good team,” García said. “But we also have a good team. There’s a lot of baseball left and I’m hopeful we’ll get out of this bad funk.”

Taking a moment to reset would be a good place to start, beginning with a rare blank Friday on the schedule before the Giants play a weekend series at Oakland. Closing ranks usually helps, too, and perhaps the Giants achieved a measure of togetherness on Thursday when a manager who had vowed never to get ejected from a game again got into a shouting match with an umpire.

“I took exception to being scolded in front of our dugout about how to approach and address our players, which obviously I have done and our veteran players have done and I’d do no matter what,” Kapler said. “We didn’t really need any prompting there. I had already gotten Jarlín off the field. He was in the dugout. At that point, things were completely under control. So I took exception to that. No reason for us to have that conversation right there in front of our dugout.”

Crew chief Dan Bellino told a pool reporter that Kapler was ejected for using “derogatory language.” Bellino also said that García had been ejected for “taunting Mookie Betts,” although nobody on his crew signaled that ejection at the time and nobody in the Giants dugout had been informed of it. Bellino, don’t forget, is the umpire who instigated a reaction that led to Madison Bumgarner’s ejection from a game at Arizona earlier this season when he turned a post-inning hand check into an extended staredown.

Bellino issued warnings to the pitcher and both benches, but tempers didn’t flare. The Dodgers merely went about their business while closing out a 5-3 win.

After the game, both García and right-hander Jakob Junis said they appreciated Kapler sticking up for one of his players — and not in the performative way that managers so often do.

“I didn’t see what happened or why he was arguing with the umpire, but sometimes it’s necessary to stick up for yourself or your team and get kicked out,” Junis said. “It’s not the worst thing. Sometimes it lights a fire under your team. Unfortunately, it didn’t happen for us today. But any time he has a chance to stand up for us and do something like that, I’m sure he’s going to do it.”

“I appreciate him having my back,” García said. “He has the back of the players and obviously, if anything were to happen, I’d have his back.”

There were positives to be found despite the loss. Camilo Doval’s new two-seam fastball continued to look devastating, even if he had to employ it without a lead to protect. Joey Bart sat out because of a mild groin injury Thursday, but he played what might have been his best series in the major leagues. And J.D. Davis hit his first home run as a Giant, displaying such easy power while stroking Clayton Kershaw’s outside fastball to the opposite field that Duane Kuiper almost muffed the moment in the broadcast booth.

Davis’s home run put the Giants ahead 2-1 in the second inning and they preserved the lead for a time in the fourth when they finally executed a relay to cut down an aggressive Dodgers base runner at the plate. Mike Yastrzemski made a clean pickup of Gavin Lux’s double in the right field corner, hit the cutoff man and Wilmer Flores made a perfect one-hop throw that took a true bounce off the grass to catcher Austin Wynns in time to prevent Joey Gallo from scoring.

The moment felt like when a high handicapper hits a pure, 275-yard drive and splits a fairway. Sometimes you’ve just got to convince yourself that the talent is in there.

Then the Giants cold-topped one. Junis walked Outman, reached his medical pitch limit, and Brebbia served up the homer to Betts.

Davis nearly homered again off Craig Kimbrel in the ninth, which would have brought the tying run to the plate. It was another impressive swing, although the drive was caught at the base of the wall in center field.

“It hasn’t led to wins for us, but he’s provided a little spark,” Kapler said.

Probably not enough to go 56-0 and match their record from last season, though.