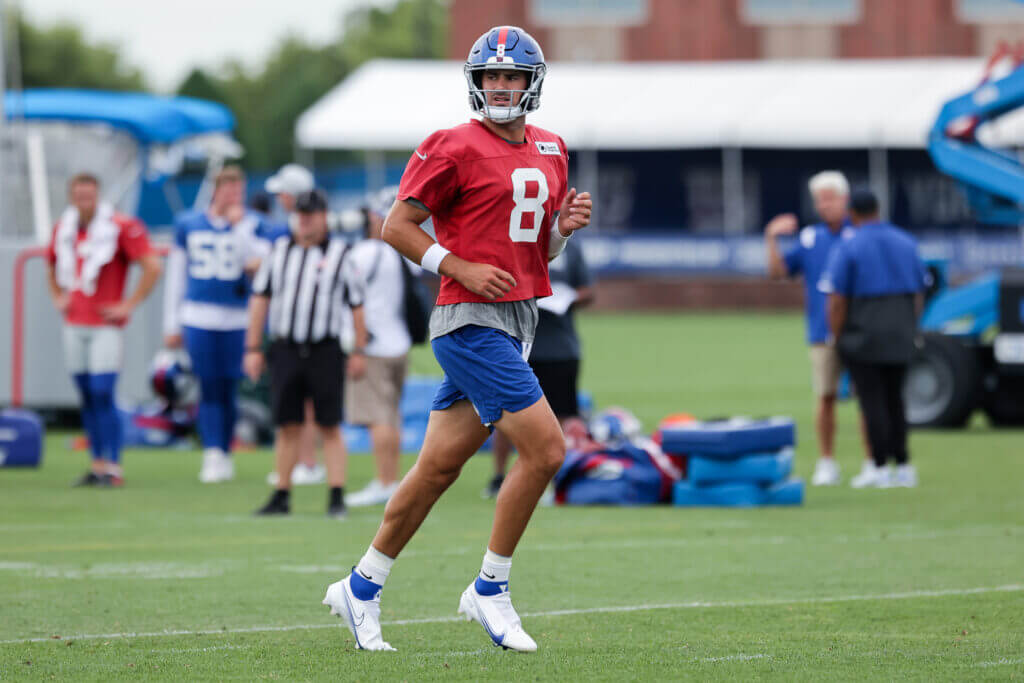 EAST RUTHERFORD, N.J. — In Monday’s practice report, I wrote that “it would be encouraging to see (Daniel) Jones have a practice where he shreds the defense.” The Giants quarterback complied, as he’s produced his two best practices of training camp over the last two days. Here are details on Jones’ crisp performance and everything else I saw at Wednesday’s practice:

Running back Antonio Williams, wide receiver Robert Foster, tight end Ricky Seals-Jones and tackle Matt Gono weren’t spotted at practice. Early indications are that the knee injury Williams suffered during Tuesday’s practice isn’t significant. There’s no word on Foster, who was carted off the practice field Tuesday after making a diving catch. No explanation has been given for Seals-Jones’ absence from five straight practices.

Gono wasn’t at practice and then landed on the “left squad” list in the afternoon. Gono is dealing with an undisclosed physical issue, according to sources. Gono has a doctor’s appointment on Thursday, which should provide more clarity on his situation. In the meantime, the Giants were granted a roster exemption for Gono, so they can add a player until his situation is resolved.

Center Jon Feliciano was back after missing four practices with a mysterious ailment. Cornerback Rodarius Williams, who is recovering from a torn ACL, didn’t participate after having a significantly reduced workload in the previous two practices. Safety Dane Belton has been watching practice with his left arm in a sling since breaking his collarbone Saturday.

• The Giants were in full pads for the second time during camp, so the run game was emphasized during Wednesday’s practice. But Jones was the story after a second consecutive strong showing.

Jones completed his final six passes of practice to lead the offense to a touchdown. The drive included an impressive contested catch by wide receiver Kenny Golladay over cornerback Adoree’ Jackson. Jones capped the drive with a swing pass to running back Saquon Barkley, who motioned toward the sideline before the snap. Barkley turned upfield after making the catch and followed a block from wide receiver Wan’Dale Robinson for a short touchdown.

• Wednesday was easily Golladay’s best practice of camp, as well. The injury-prone receiver was given a maintenance day on Tuesday and looked fresh on Wednesday.

Golladay has seemed like the odd man out in an offense dominated by shifty playmakers, but the 6-foot-4, 213-pounder provides an element that his diminutive counterparts lack. If Golladay can get back to being a threat on contested catches downfield, he’ll add a vertical dimension to the offense.

• Wide receiver Kadarius Toney had another light workload. The Giants clearly are intent on keeping the dynamic wide receiver healthy.

Head coach Brian Daboll and offensive coordinator Mike Kafka continue to add to the package with Toney and Robinson in the backfield during individual drills early in practice. The potential for creativity, especially with Toney’s passing ability, is off the charts with those players.

• Don’t expect Toney to return kicks. Toney and Golladay work with wide receivers coach Mike Groh while the rest of the roster participates in special teams periods. Wide receiver Richie James is the early favorite to be the punt returner. James or wide receiver C.J. Board will likely be the kickoff returner.

Barkley also skips special teams periods for individual work with running backs coach DeAndre Smith and director of coaching operations Laura Young. On Wednesday, the group focused on pass protection technique, which has been one of Barkley’s biggest weaknesses.

• Barkley has looked explosive early in camp, which is to be expected now that he’s nearly two years removed from his torn ACL. He had a nice run around the left end with Feliciano leading the way as a puller. Offensive line coach Bobby Johnson gave Feliciano a big high five after the play.

Daboll barked at Barkley to wake up when he went right on a sweep that was designed to go left. Daboll made the offense huddle again and then run the play to the left.

• Robinson has been an exciting weapon during camp, but he had another high pass go through his hands Wednesday. It will be important for Jones to put passes on the 5-foot-8 Robinson’s frame, or there could be disastrous tipped balls off of drops.

• Jones sent many of his targets at No. 2 cornerback Aaron Robinson. Robinson wasn’t beaten deep, but he consistently allowed catches. That position remains a major question mark, and there isn’t anyone further down the depth chart pushing Robinson for the job.

• Swing tackle has become a major concern with Gono’s abrupt departure and Korey Cunningham’s pre-camp release after he suffered an injury away from the team. Matt Peart remains on the physically unable to perform list and doesn’t appear close to returning from a torn ACL.

Rookies Josh Ezeudu and Marcus McKethan were the second-team tackles Wednesday. Both players have positional flexibility but are ideally suited to play guard. The Giants rotated five different players at right tackle on the third-team offense — Ezeudu, McKethan, Max Garcia, Ben Bredeson and Jamil Douglas — as they try to find potential answers.

If the season started tomorrow, Ezeudu would likely be the swing tackle. The Giants have time to pursue upgrades from outside the roster, although they shouldn’t part with any draft capital to fill a depth spot this season. A street free-agent signing or a player-for-player trade (WR Darius Slayton?) are better options.

• Defensive coordinator Wink Martindale’s schemes constantly spring unblocked blitzers. It will be important for inside linebackers, slot cornerbacks and safeties to be able to blitz effectively to maximize the opportunities presented by this system.

• Inside linebacker Tae Crowder had an active day. He blew up an end-around to Toney and had a nice hit on a Barkley run up the middle. Third-team defensive lineman Ryder Anderson broke through the line to stuff a run by Jashaun Corbin.

• No. 2 running back Matt Breida continues to display his speed. He caught a swing pass from Tyrod Taylor late in practice and blazed down the left sideline for a touchdown. A solid offensive day by all three units was capped by a Davis Webb touchdown pass to wide receiver Keelan Doss on a fade route.

• There was a nine-on-seven period early, which is one of the most physical practice drills. There are no cornerbacks or wide receivers on the field, so both sides know every play is a run. Each play is a high-impact collision. It’s tough to evaluate with so much happening in such a confined space, but Corbin showed good burst to break through the pack while running with the second-team offense. Undrafted rookies Jeremiah Hall and Andre Miller again got reps at fullback with the first-team offense.

• Pass rushers and offensive linemen engaged in one-on-one drills early in practice. Defensive tackle Leonard Williams’ dominance continued as he blew past right guard Mark Glowinski on one rep. Defensive tackle Dexter Lawrence got a reality check with Feliciano back in action. Feliciano twice used Lawrence’s momentum against him, pushing the defensive tackle into the ground.

Going to thread nine of these again:

1. Andrew Thomas has been so good in these. Another W against Kayvon Thibodeaux: pic.twitter.com/qGZUqid4vv

Right tackle Evan Neal had a rough showing on his two reps. He was in good position against Thibodeaux initially but then got flagged for a hold when the outside linebacker started to turn the corner. Outside linebacker Quincy Roche, who has looked quick off the edge all camp, abused Neal with a spin move. No one should overreact to struggles in a drill that favors the pass rusher, but Neal certainly has room to improve in pass protection.

Play of the day

Jackson had tight coverage on Golladay on the first play of the final drive, but it didn’t matter. Jones threw the ball up and Golladay made an excellent contested catch along the right sideline for a big gain.

Quote of the day

“Creating a culture that you see for your team, you’ve got to give it sun and water every day. It just doesn’t stay the same. You have to stay on top of it. The values that you believe in, you have to commit to those, and you have to find different ways to express those and show them good examples of what they’re doing.” — Brian Daboll

The Giants will hold a walk-through on Thursday that is closed to the public. They will hold their annual “Fan Fest” at MetLife Stadium at 6:15 p.m. Friday. The intrasquad scrimmage is open to fans.

Leslie Grace Responds to ‘Batgirl’ Being Shelved, Thanks Fans for Support: ‘Batgirl for Life!’