In 2019, the Emirates crowd cheered when Granit Xhaka was substituted against Crystal Palace. He responded by swearing and throwing his Arsenal shirt to the floor.

In 2022, he is an integral part of Mikel Arteta’s side, has said he wants to give something back to fans and has spoken of the love he feels from them.

If there is one player who has performed a 180-degree turn in their relationship with Arsenal fans, then it’s Granit Xhaka.

Last weekend’s 4-2 win over Leicester — in which he scored and assisted within a single game for the first time — was his 252nd appearance for the club and his growing influence was evident.

He may have lost the captain’s armband over that incident in 2019 but, as he and others have said, he is still an influential figure. He also remains in the squad’s leadership group, along with Martin Odegaard and Gabriel Jesus.

He was on the verge of leaving Arsenal after that spat with fans, but a comment during the promotion of Amazon’s All or Nothing documentary series revealed how much has changed since his months of exile. 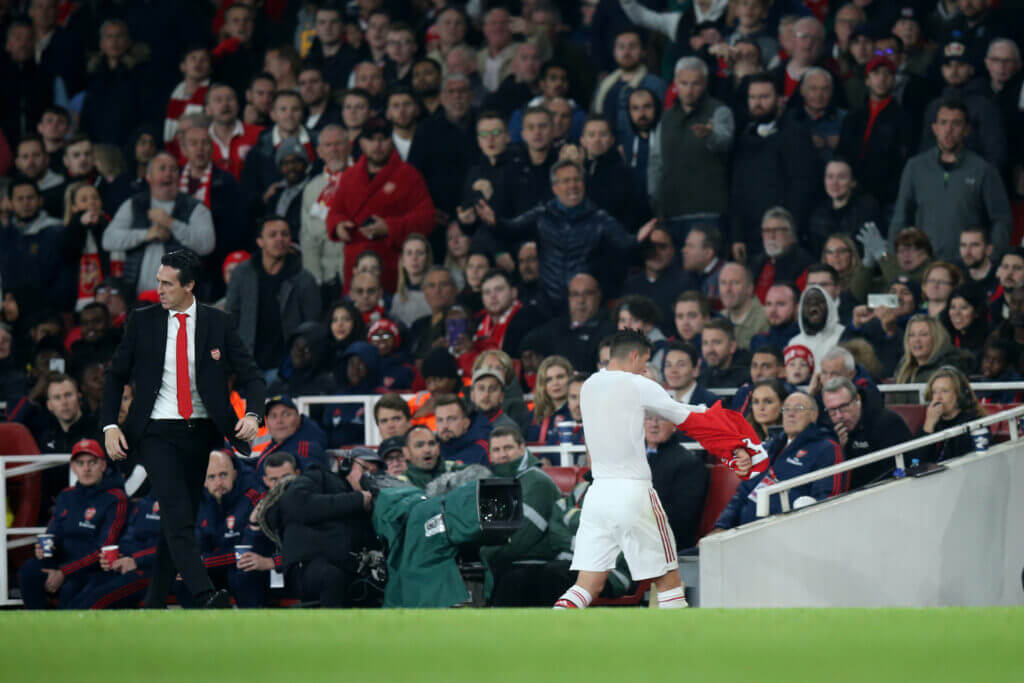 Granit Xhaka walks past Arsenal manager Unai Emery and straight down the tunnel during Arsenal’s game with Crystal Palace in 2019 (Photo: Mark Leech/Offside/Offside via Getty Images)

Asked about the struggles of Nuno Tavares, which were shown in the documentary, the 29-year-old replied: “Of course (the documentary shows problems footballers go through) but it is our job.

“The people who do not see us in the training, for example, do not see how hard we are working. They see us only in the 90 minutes. Everyone has a good and bad day. That is why I spoke with the club as well about, ‘Why can’t we bring the fans maybe once a week so they can see us how we train?’.

“It is not like we are coming here to waste our time. We care more than people think. Me and Aaron (Ramsdale, who is sitting next to him) for example, we can’t sleep after the game when we lose. It does not matter if we are home or away. But no one can see that.

“This makes me very disappointed and very sad that after that, the people start to speak: ‘You didn’t give everything for the club, you do that, you did this…’. This is bullshit. But it is so difficult in England to bring the people to the training ground. In Germany, it is different, you have thousands of people and they come every day.”

This was not the first time Xhaka has raised concerns about this publicly. He mentioned wanting a closer relationship between players and fans in his interview with The Players’ Tribune in April.

As he pointed out, open training sessions are fairly normal in Germany as well as in wider Europe.

For example, RB Leipzig tend to have one training session a week that is open to fans and media. That can change when Champions League games kick in, but usually, if sessions are held at their regular training ground, around 500 people attend, which grows to around 1,500 when open training is held at the youth team’s stadium.

To make training even more accessible, Leipzig, Bayern Munich and Borussia Dortmund have live-streamed some sessions on YouTube this year. Bayern and Dortmund’s live streams were in January and Leipzig’s was in July, with fans present in the background at Leipzig and Dortmund.

In England, there may be an air of suspicion about open training sessions, especially since the infamous “Spygate” saga between Leeds United and Derby County in 2019. Derby spotted a Leeds United employee sent by then-manager Marcelo Bielsa to observe their training before the sides played each other.

That said, tactical sessions are not on show during these open training sessions. Instead, they mostly consist of warm-ups with and without the ball, passing drills, possession games, finishing drills and a match to finish. In Leipzig’s case, they hope these open sessions help fans build a closer affinity to the club. 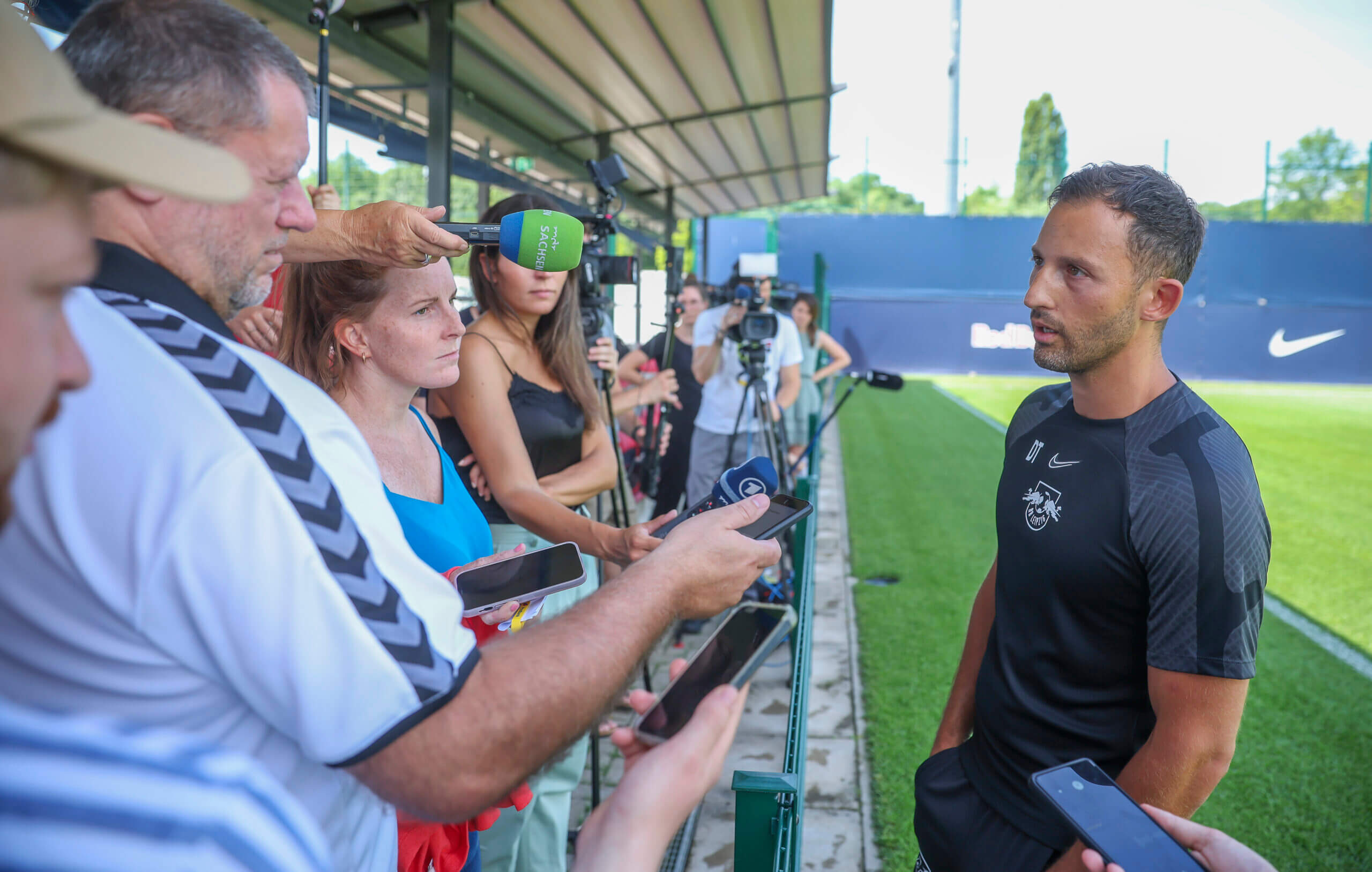 In France, open training sessions are down to whether the coach is comfortable with them taking place.

When Maurizio Sarri was manager of Empoli, his team used to train at their Carlo Castellani Stadium. Anyone could walk in to observe. On one occasion, then-Sampdoria manager Sinisa Mihajlovic was a spectator and went on to have a private discussion with Sarri after they took a picture together on the pitch.

It seems implausible that could ever happen with two Premier League managers. The cultural differences are not just evident across different countries but in different eras too.

During Kevin Keegan’s first spell at Newcastle United in the 1990s, he opened up training every day of the school holidays. It attracted thousands of fans, to the point where fish and chips and ice cream vans would park outside. It would take players up to 45 minutes to return to their changing rooms after signing autographs.

In England, today, that prospect feels less likely than ever. There is much more control around public access to football clubs. From a Premier League perspective, there are no rules against open training sessions — it would be a club decision, like in France.

It is understood Arsenal considered the possibility even before Xhaka raised the point and they took his thoughts on board. It is mostly a matter of planning and logistics, as it would not be too hard to imagine more than 1,000 people turning up if doors were opened, even if they were not invited.

Arsenal used to do a “members’ day”, which was essentially an open training session at Highbury, and then the Emirates, before the start of a new season. Returning to that next summer may allow a reset to what was considered normal before COVID.

It is unlikely anything resembling an open training session would happen at London Colney anytime soon but Xhaka has raised an interesting point about the relationships between clubs, players and supporters in England.

From an Arsenal perspective, it appears there is a stronger connection between supporters and the club than in recent years.

The Ashburton Army, a young group of supporters who occupy block 25 in the Clock End, began their quest to improve the atmosphere at the Emirates just before the first lockdown in March 2020. Moved closer to the pitch last weekend, they were able to create an energy and noise inside the ground that has rarely been matched for a regular league game.