Hamza Choudhury had an all-action week that Craig David would have been proud of.

Watford looked short in midfield on Monday, his agent got a call on Tuesday, by Wednesday he’d had his medical and was announced, he trained with his new team-mates on Thursday, then debuted on Friday. As he strolled down Occupation Road after the 1-0 victory over Burnley wearing his blue training kit, he could deservedly contemplate chilling on Saturday and Sunday after a dynamic debut for the loanee.

The Athletic understands the option to buy Choudhury at the end of the season is for a fee in the region of £6million ($7.3m). If his first showing is anything to go by, it would be a snip for the midfielder with the eye-catching hair who instantly endeared himself to his new supporters, earning a standing ovation when he came off after 82 minutes.

“He was excellent,” said Watford head coach Rob Edwards, who described him as having a “tenacious” style. “His running and desire is infectious in the way he gets about and covers the ground so quickly, it was a terrific debut and I’m really pleased with him.”

Prior to departing Leicester, his parent club exercised a two-year option that extended his contract to 2024. He may well return to the King Power stadium, but his first impressions of his new home were positive, too. 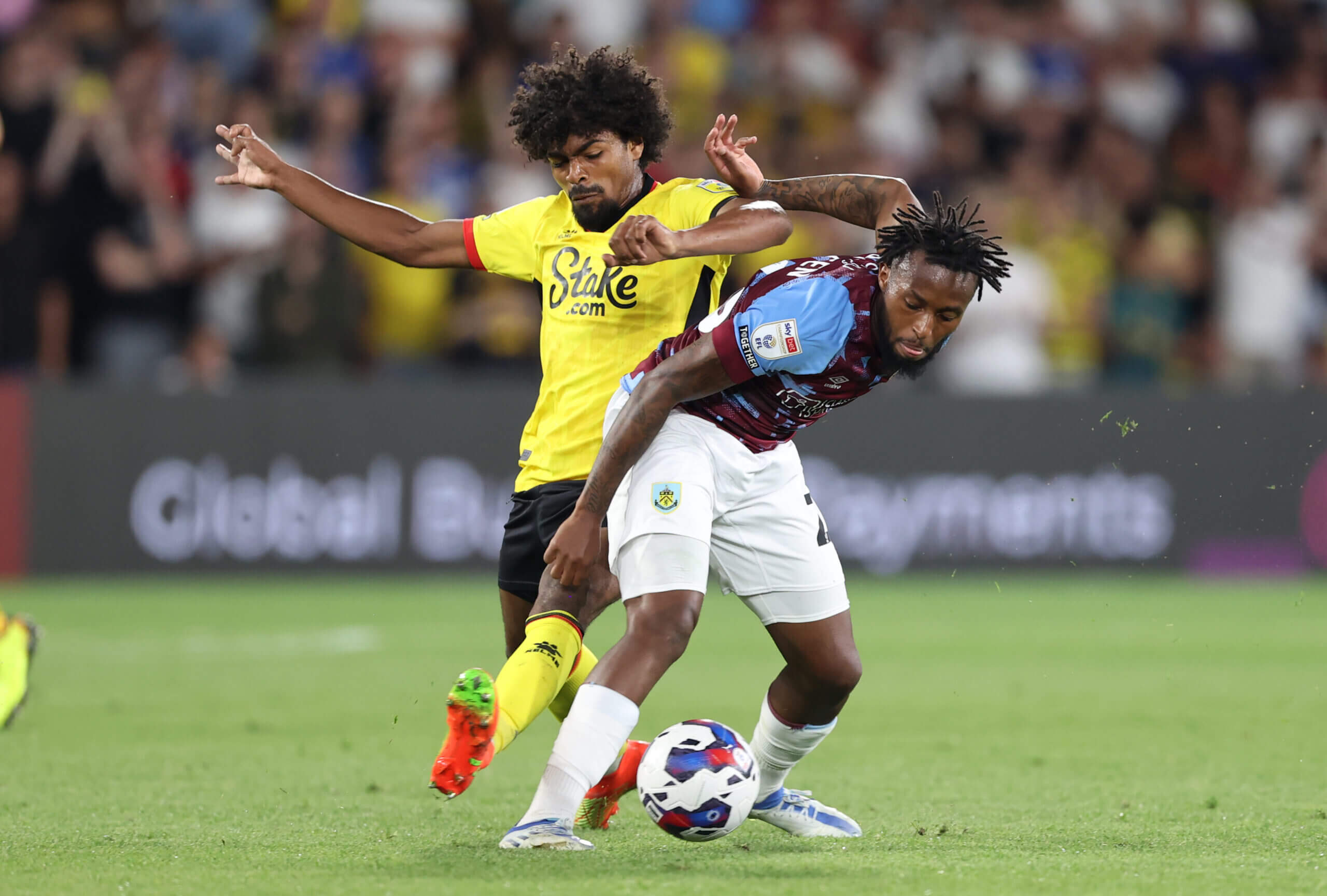 “You just have to look at the depth of the squad, we’ve got so many talented boys with so much grit and fight,” Choudhury told Sky Sports. “I spoke to the manager about what he wants to do, bring into the training ground and everyday life, so for me, it’s an exciting place to be.”

He fell just eight minutes short of the full 90 minutes due to twinges of cramp, but it was a sterling effort. He had not played a full match since January in two appearances as a makeshift centre-back, including against Watford in a 4-1 FA Cup third-round victory. Only 129 minutes in five appearances followed last season, with his final appearance coming against Manchester United at Old Trafford in April.

Watford were keen to keep his signing under the radar until the last moment due to other clubs wanting him. West Brom made an attempt at the last minute, but were unable to match Watford’s terms. Steve Bruce previously tried to sign him at Newcastle in a transfer triangle that involved Watford in January 2021. Newcastle wanted Choudhury, Leicester lined up Nathaniel Chalobah to replace him and Watford wanted Newcastle’s Matty Longstaff.

Bruce wanted him despite being scathing about a Choudhury tackle on Matt Ritchie in 2019. Liverpool manager Jurgen Klopp also criticised him for a challenge on Mohamed Salah the following year. All part of the 24-year-old’s learning curve. “They (Leicester coaches) have helped me get through that. They told me what to do and what not to do and how to deal with those situations on and off the pitch,” he said in an interview with The Athletic in 2020. “Tackling is such a big part of my game, but it is about learning when to do it and in the right situations, and to maybe not take my aggression away but curb it and channel it in the right way. The game is played at such a fast tempo now that tackles can look nasty without any malicious intent.”

Against Burnley, that control was evident. Given a warm reception when his name was read out, he started the ball rolling — wearing fluorescent orange boots — from kick-off and slotted in well. During 82 minutes he had 39 touches, with a passing accuracy of 93 per cent (94 per cent in his own half and 89 per cent in the Burnley half), making two tackles and interceptions each, one regain, one clearance, winning four duels, four ground duels and drew two fouls. 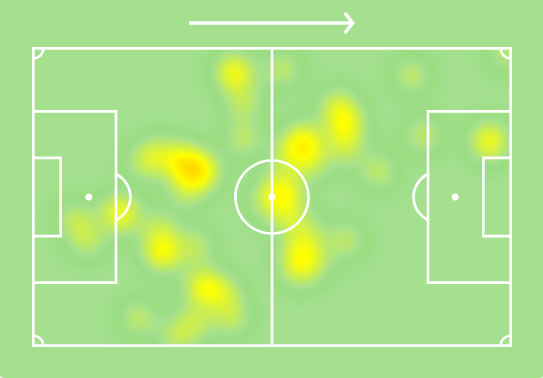 Covering the ground, as Edwards mentioned, wasn’t an issue, as his comprehensive heatmap highlights. What he did on and off the ball, in Watford’s new 4-3-3 formation, was vital in providing more balance and bite alongside Tom Cleverley and Edo Kayembe. With an air of calm assuredness, he was a picture of functionality and energy. It was the performance of an enabler, who made the engine room run more smoothly, not simply because he was an additional body, but because he helped with the tempo, pressing and was an all-round reassuring presence.

In the first half, there was a calm pass here, a mop-up there, before an acrobatic overhead kick was thrown in for good measure. One crunching challenge from Josh Cullen knocked him sideways and, as he got back up to his feet, there was an early loss of possession, but he recovered well.

In the final third, he joined in and if things broke down, he busted a gut to get back behind the ball. He created some helpful angles as a pivot in midfield, on one occasion offering himself for a pass from Craig Cathcart before intelligently diverting the ball 90 degrees to the left flank for Hassane Kamara to push forward.

Although those directly involved in the well-worked winning goal — Joao Pedro, Ismaila Sarr, Ken Sema (assist) and Tom Cleverley (goalscorer) — deserve huge credit, Choudhury’s willingness to work in both boxes was evident, as he was there at the far post for the ball across the six-yard box if need be.

Once again in the second half, he challenged at the far post when Kamara hung up a cross, as he sniffed an opportunity for a second. He only has two goals to his name in over 113 appearances, but it appears he’s hungry for more.

Perhaps the stand-out moment of the night for Choudhury — who snaffled, harried and blocked danger frequently — came on 63 minutes when Burnley midfielder Samuel Bastien drove towards the edge of the Watford box and was ready to make his move, before Choudhury picked his pocket with a superb sliding tackle.

The crowd got to their feet and did so again about 20 minutes later, when he strode off to be replaced after Kamara’s red signalled a call for Christian Kabasele. He returned the applause and high-five from his new head coach.

He’s been out on loan before, with two spells at Burton Albion, but this move reflects his biggest opportunity to prove himself away from his boyhood club Leicester. Having watched from the terraces, often with his uncle Faruque, he made the grade after captaining the under-15s all the way through to the under-23s.

His debut came in September 2017 against Liverpool in the EFL Cup, his first Premier League start coming a year later, coincidentally against Burnley. He scored his first goal against Newcastle in 2020, his second came in the Europa League against AEK Athens.

More recently, the former England under-21 international was acclaimed as Leicester’s Javier Mascherano by Brendan Rodgers for those stand-in centre-back performances earlier this year and made a late cameo in the 2021 FA Cup final win.

He struggled to cement a place as a defensive midfielder though, with both Papy Mendy and Wilfred Ndidi ahead of him. His Watford debut showed that while he can make things tick in a deeper lying role and act as an effective guard in front of the back four, he can also go box-to-box and provide an energetic influence in advanced areas.

“He is helping me with the tactical side of the game and I am still learning a lot,” he told The Athletic about working with Rodgers at Leicester. “I do feel like I am an established first-teamer now but I still have a lot to prove and achieve.”

Off the field, he and his wife — who have two children — learnt to play the piano during lockdown via YouTube tutorials. The first song he mastered was Clocks by Coldplay, a band famous for their breakthrough hit Yellow. Choudhury started strongly wearing that colour with an enticing repertoire of skills as a midfield maestro.