As N’Golo Kante went down clutching his hamstring against Tottenham Hotspur, Crystal Palace’s hopes of enticing Conor Gallagher away from Chelsea for a second consecutive season suffered a significant blow.

Gallagher, so instrumental last season during his loan from Chelsea, has attracted the attention of several Premier League sides. Until that Kante injury, however, Palace harboured optimism they could be reunited with the 22-year-old.

That now seems even less likely, leaving manager Patrick Vieira with a problem to solve. Palace’s midfield has depth, but requires more quality and a different type of player.

Eberechi Eze does not appear a natural replacement for Gallagher as a No 8, and Jeffrey Schlupp does not seem to fit alongside him.

Vieira will switch formation this season and may occasionally play two deeper midfielders, but a direct Gallagher replacement is still required. Vieira said Eze could have the same impact, but stopped short of saying he could play the same role. 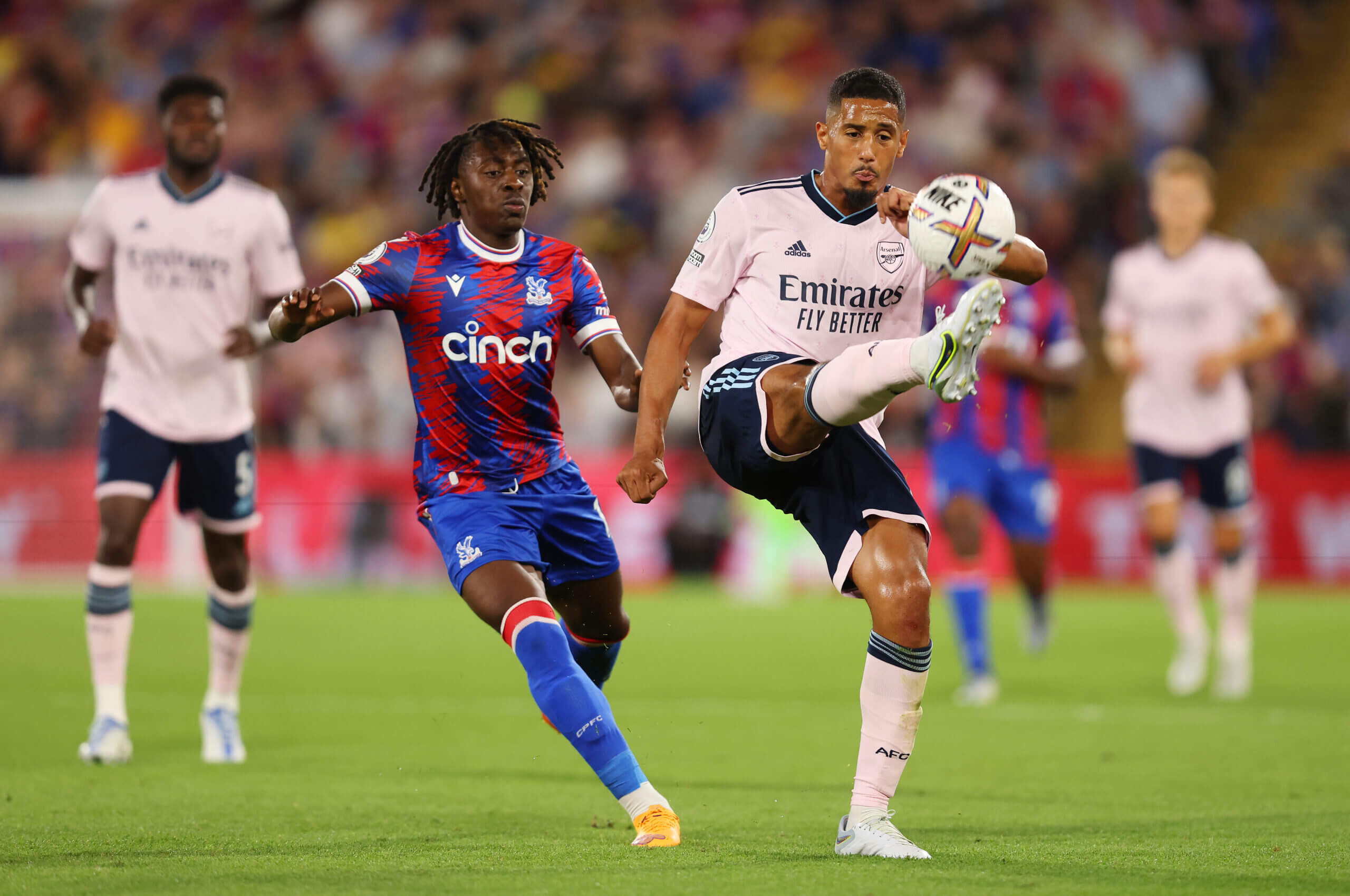 Eze is not an ideal replacement for Gallagher (Photo: Julian Finney/Getty Images)

The implication was that something would have to change unless new signings were forthcoming.

That remains a possibility, although Vieira insisted he was happy to work with what he had.

Trying to find a Gallagher clone who is available is almost impossible. His loan spells with Charlton Athletic and West Bromwich Albion shaped him into an all-energy box-to-box midfielder who can score goals and find space behind defences to add assists to his game.

His spell under Sam Allardyce at West Brom, in particular, helped develop the defensive side of his game.

But what are the possible alternatives? To find out, The Athletic used Smarterscout, which gives players a series of ratings from zero and 99 based on how often or effectively they perform particular actions, to assess a possible shortlist of targets for Palace.

We first looked at players with 900-plus minutes played last season at central midfield across Europe’s top five leagues, the Dutch Eredivisie and the Portuguese Primeira Liga.

We then ran a test to find players who rated similarly for on-ball actions such as link-up play volume, ball carrying, progressive passing and ball retention, as well as contribution to their team’s attack and propensity to get into advanced areas.

We also looked at off-ball actions for players who had a similar volume of ball recoveries and defensive actions such as tackles and clearances, alongside their levels of defending intensity.

There is no suggestion these are players Palace are interested in, but simply players whose data draws parallels with Gallagher. It is worth noting the data picks up what a player does, but not necessarily the manner in which they do it.

How Gallagher drives relentlessly in the press, for example, is more difficult to show as reliably in the numbers.

Palace’s recruitment strategy this summer has centred on younger talent with a long-term resale value, so we have focused only on those aged 28 or younger, and this is based on the players at their clubs in the 2021-22 season. 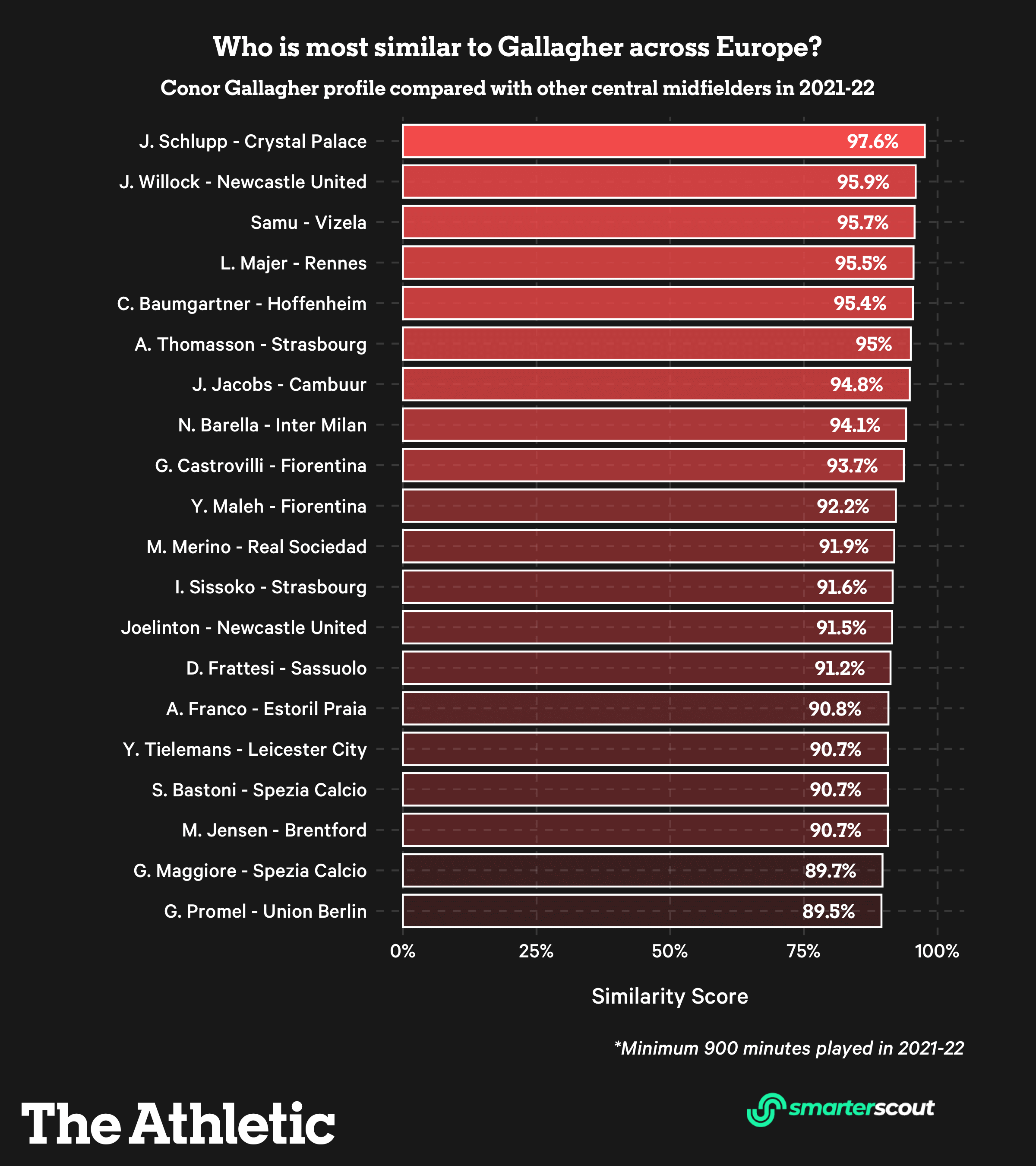 Perhaps Palace have a replacement for Gallagher already. Schlupp is rated as 97.6 per cent similar and statistically, there are parallels between the two. Schlupp is excellent as a ball carrier (with a carry and dribble volume of 74 out of 99), breaking through the lines with a burst of speed, and his powerful shot is a key attribute (shot volume 95 out of 99). 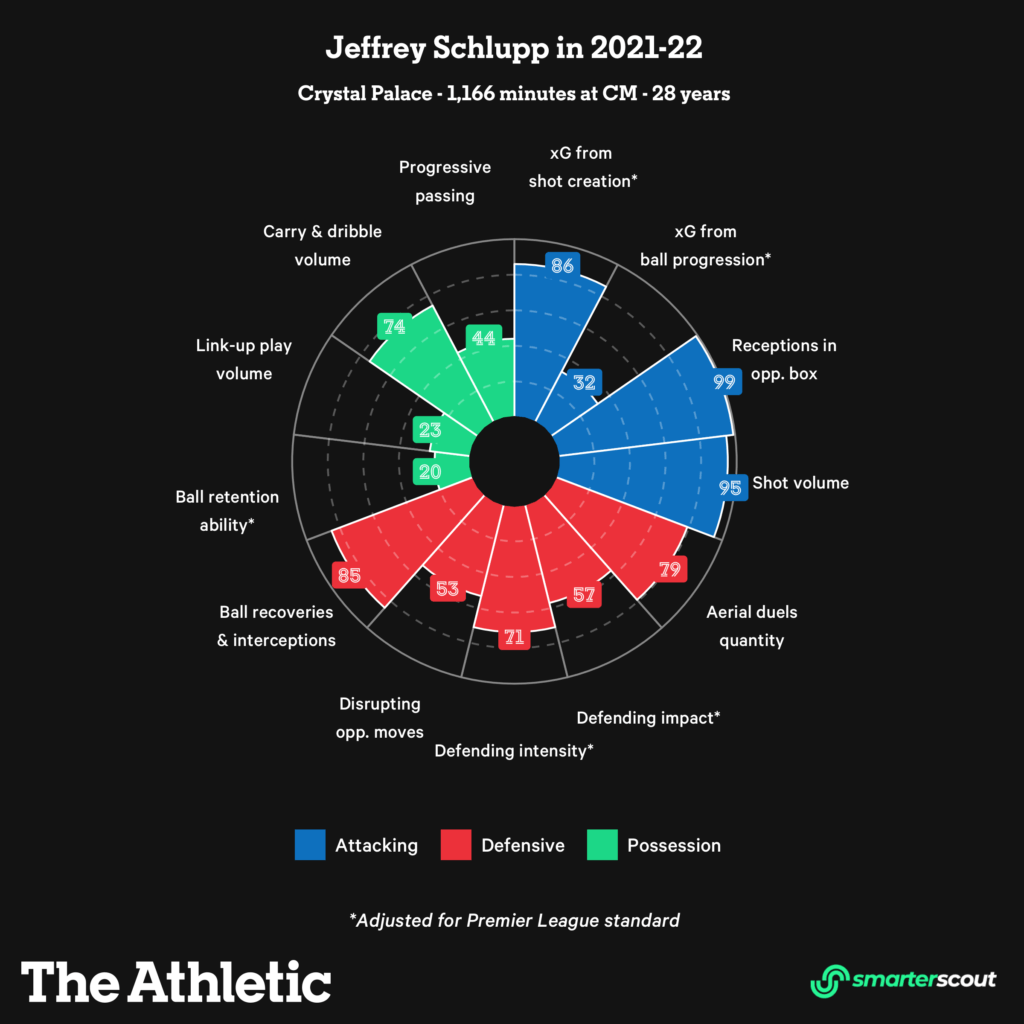 But he does not have the same acceleration and agility. He is less persistent in the press than Gallagher, too. Central midfield is not necessarily a natural position for the 29-year-old, who has also played as a striker and a left-back. That versatility has been an advantage to him and the team throughout his career, but it has prevented him from specialising in one position.

His role alongside Eze does not appear to suit Palace, even if he is capable of dropping back and playing alongside Cheick Doucoure when necessary.

The most left field of the options. Samu, a 26-year-old playing in Portugal’s Primeira Liga for Vizela, is rated as 95.7 per cent similar to Gallagher.

He is a technical midfielder who gets forward (receptions in the opposition box are rated at 90 out of 99), is a good passer of the ball (progressive passing 81 out of 99) but limited physically — however, he is considered to be determined and hard-working. 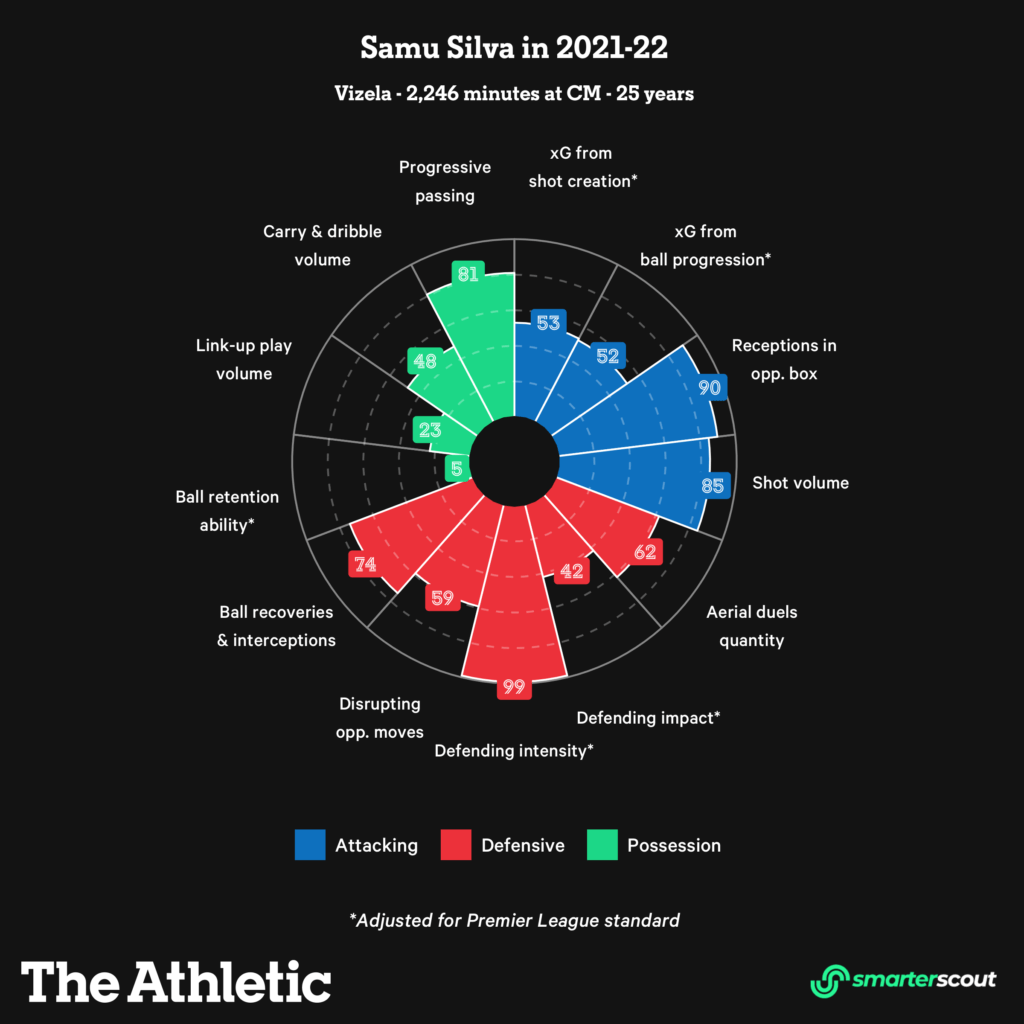 That is reflected in a high volume of defensive actions (ball recoveries and interceptions 74 out of 99) but even though Smarterscout’s numbers are adjusted to match Premier League standards, the Portuguese league is very different to the football Palace would be playing. There are questions over whether he would have the stamina and power to cover longer distances at a higher intensity.

That would probably exclude him from being a good option as a replacement.

A 95.5 per cent match to Gallagher’s attributes, the 24-year-old joined Rennes last season from Dinamo Zagreb, and played 36 games in all competitions.

He scored six goals and contributed nine assists while impressing as a stylish midfielder and a capable dribbler (carry and dribble volume 87 out of 99) in an attacking team. This is reflected below in just how much he contributes to his team’s attacking actions (xG from ball progression 84 out of 99). 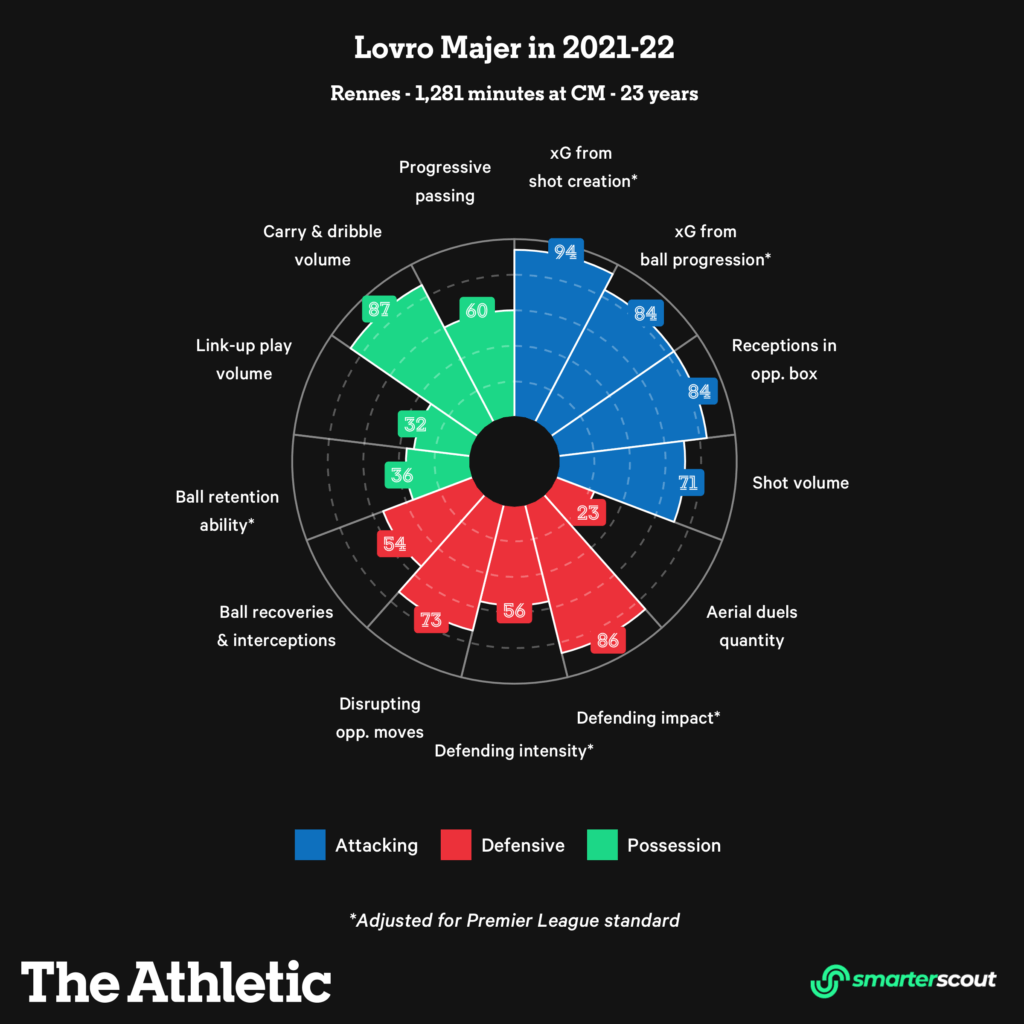 More clinical but a less intense defender than Gallagher, he is a pure No 10. Vieira wants to be flexible and did sometimes use a No 10 last season but that role is unlikely to be a regular feature this year.

It would also be difficult to persuade Rennes to part with the 24-year-old.

Again, this would not be a particularly suitable alternative.

The Fiorentina midfielder has four caps for Italy and is more of a No 8 than Majer. 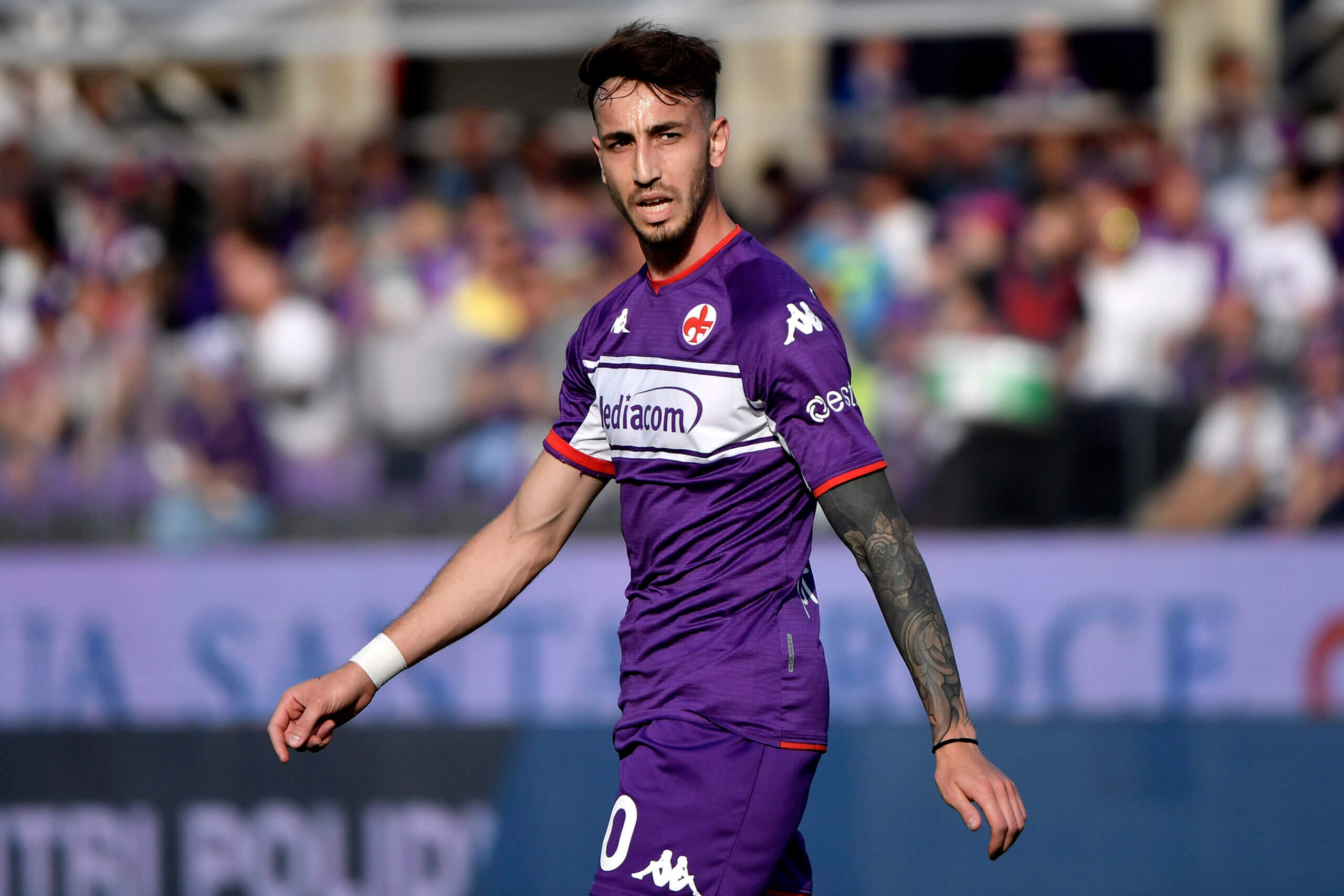 Gaetano Castrovilli is known for his passing (Photo: Andrea Staccioli/Insidefoto/LightRocket via Getty Images)

Another technical player who has a physical profile similar to Gallagher, he is also stylish on the ball and incisive in possession (progressive passing 70 out of 99).

His defensive metrics show that he is less industrious and athletic than Gallagher, however. 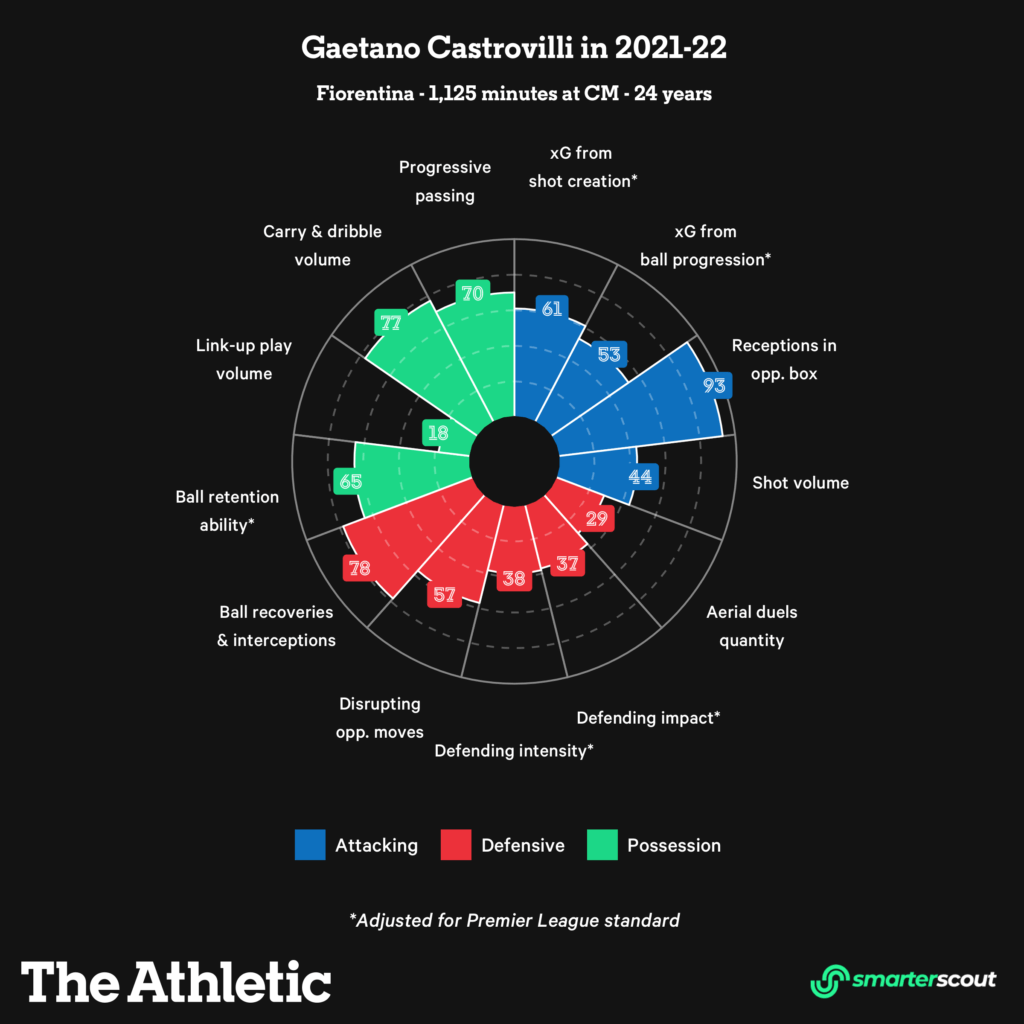 The 25-year-old has fallen away in his performances recently, but that could make him more available to a club with Palace’s stature.

The oldest of the suggestions, Thomasson would fit into Vieira’s desire to add experience to his young squad but go against the general strategy of recruiting younger talent.

He would play a moderate role in building moves (link-up play volume 47 out of 99) and is considered to have good control, composure and poise. He takes good positions in the attacking third (receptions in the opposition box 97 out of 99), but his clips show he is less dynamic than Gallagher, not quite so direct in attack and lacking as much intensity — but he fits the profile at a 95 per cent match. 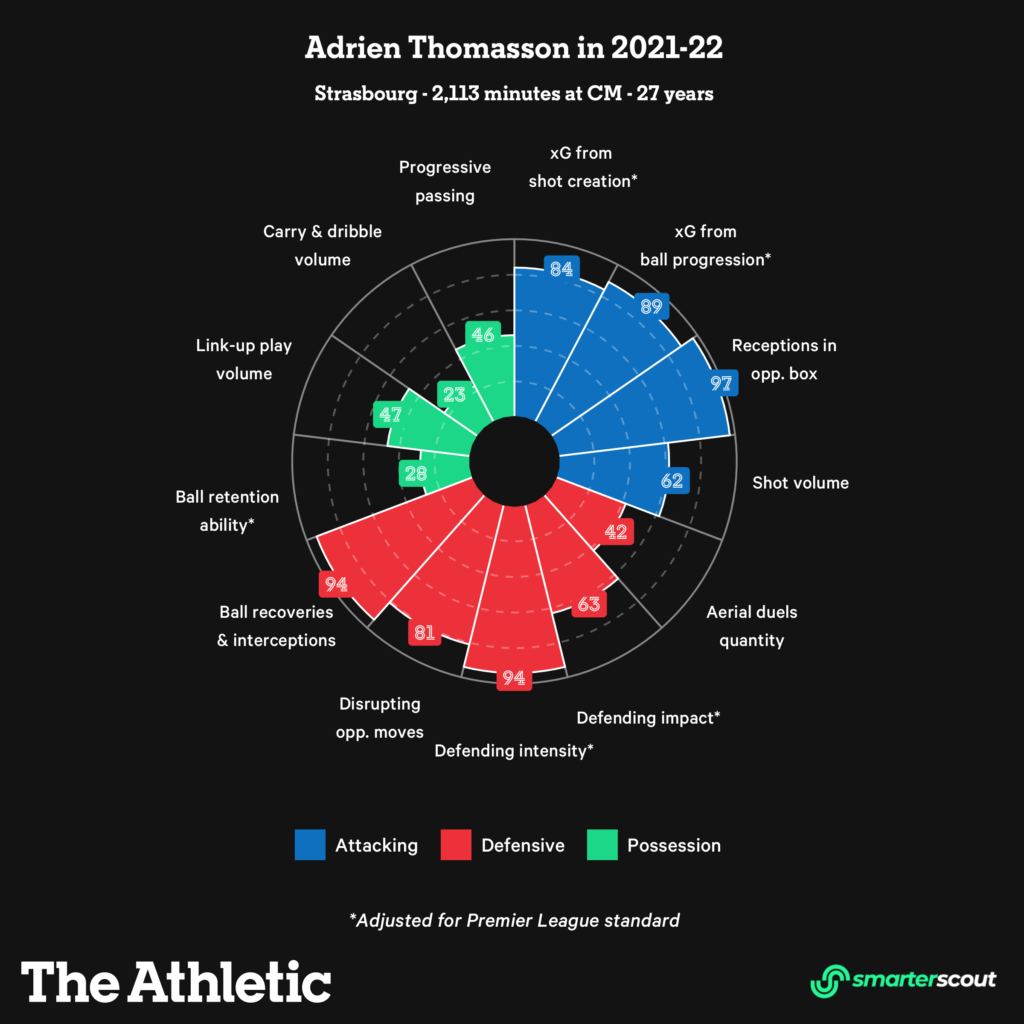 The 28-year-old has 27 goals from 122 appearances for Strasbourg in Ligue 1 over four seasons, with eight goals and four assists last season.

From a statistical perspective, finding an affordable replacement for Gallagher is difficult. His unique combination of attributes means many of the suggested players either don’t play in the same position or are not of the required level to replace Gallagher’s contribution last season.

The lack of alternatives is a demonstration of the challenge Palace face in finding a way to fill the void he has left behind.

Licorice Pizza to Galaxy Quest: the seven best films to watch on TV this week