“He makes passes in the team that not many can make.”

Youri Tielemans may be reluctant to commit to Leicester City right now, but Brendan Rodgers, who is incredibly open about Tielemans’ importance to his side, has been totally committed to his playmaking midfielder.

Tielemans hasn’t been at his bristling best this season, certainly not to the levels of the last campaign when he ran Leicester’s midfield and scored that famous winner at Wembley exactly a year ago. Whatever happens, that strike against Chelsea which handed Leicester their first ever FA Cup victory will be ingrained in the club’s psyche. It will be run repeatedly, year after year, whenever the final comes around.

His situation then wasn’t dissimilar to now. Leicester had made him a new contract offer and wanted him to commit his future to the club, but he wanted to wait and assess his options at the end of the season. It is the same again only now he has one year left on his contract, not two, and while there were no offers last summer, there could be this time.

Leicester still want to keep the Belgium international, even if there are a few fans now who have grown bored of the Tielemans saga, which has dominated column inches, even though nothing has actually happened. Some supporters now feel that if he wants to go, let him go, even though he hasn’t actually said he wants to leave. The likelihood is that if a Champions League club comes in for him he will probably want to leave the King Power Stadium.

So Leicester have already begun the search for a midfielder that can bring the same qualities to the squad that Tielemans does, because in terms of what he offers there are no like-for-like, ready-made replacements already at the club.

Wilfred Ndidi is a destructive, powerful midfielder. Similarly, Nampalys Mendy patrols in front of the back four like a guard dog. Likewise, Hamza Choudhury is an aggressive midfielder. Then there is Kiernan Dewsbury-Hall, a box-to-box, all-action midfielder and almost old-school in his approach, while James Maddison is at his best further up the field as a No 10, floating into pockets and looking to take the ball on the turn.

Maddison has equalled his best-ever Premier League season for goal involvements (nine goals and five assists), the same as in 2018-19, and he’s scored 15 goals in all competitions for the first time since at Norwich in 2017-18. Having been left out earlier in the season by Rodgers when his work rate and pressing dropped, Maddison has responded superbly when the team was decimated by injuries and needed him most.

But Tielemans has been almost ever-present. He has missed only six games in the entire campaign. While those around him were dropping like flies, his reliability, over his three and a half seasons at the club, has been remarkable. He has made 156 appearances for the club in that time.

Tielemans is the link player, the conduit through which Leicester link defence and attack. He is the transitional player who moves Leicester up the pitch. Dewsbury-Hall does it by carrying the ball, while Tielemans looks to make the ball do the work.

As you can see from his positions map, he plays predominantly centrally and deep at times, in what has become known as the quarterback role. 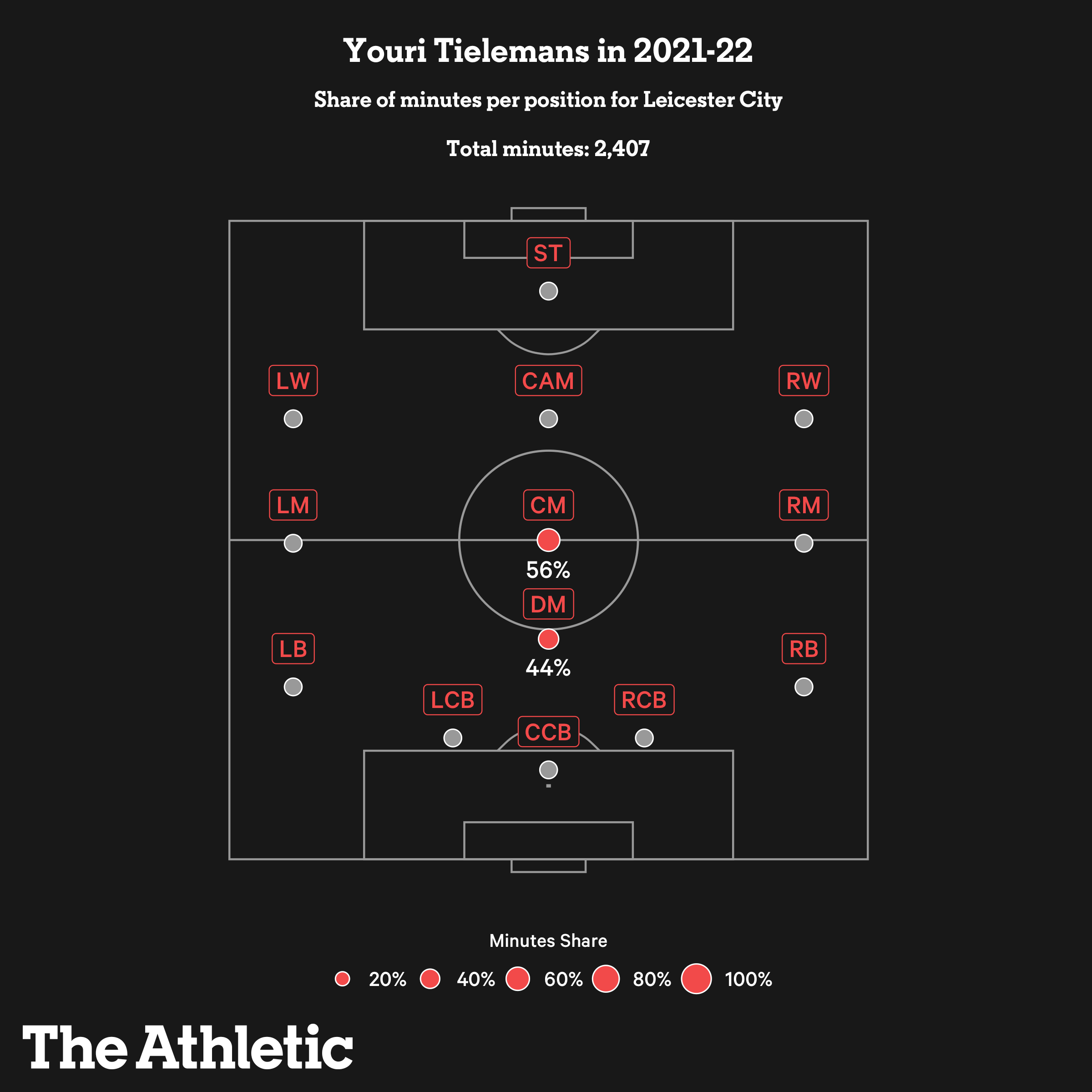 Using smarterscout data, we can also see how often he looks to play those longer, searching passes upfield (smarterscout rate his progressive passing as 74 out of 99). He’s not going to drive forward too often with the ball at his feet — like Dewsbury-Hall, or even his countryman Kevin De Bruyne — as shown by his carry and dribble volume (19 out of 99), neither is he that destructive type like Ndidi, highlighted by his defensive ratings. 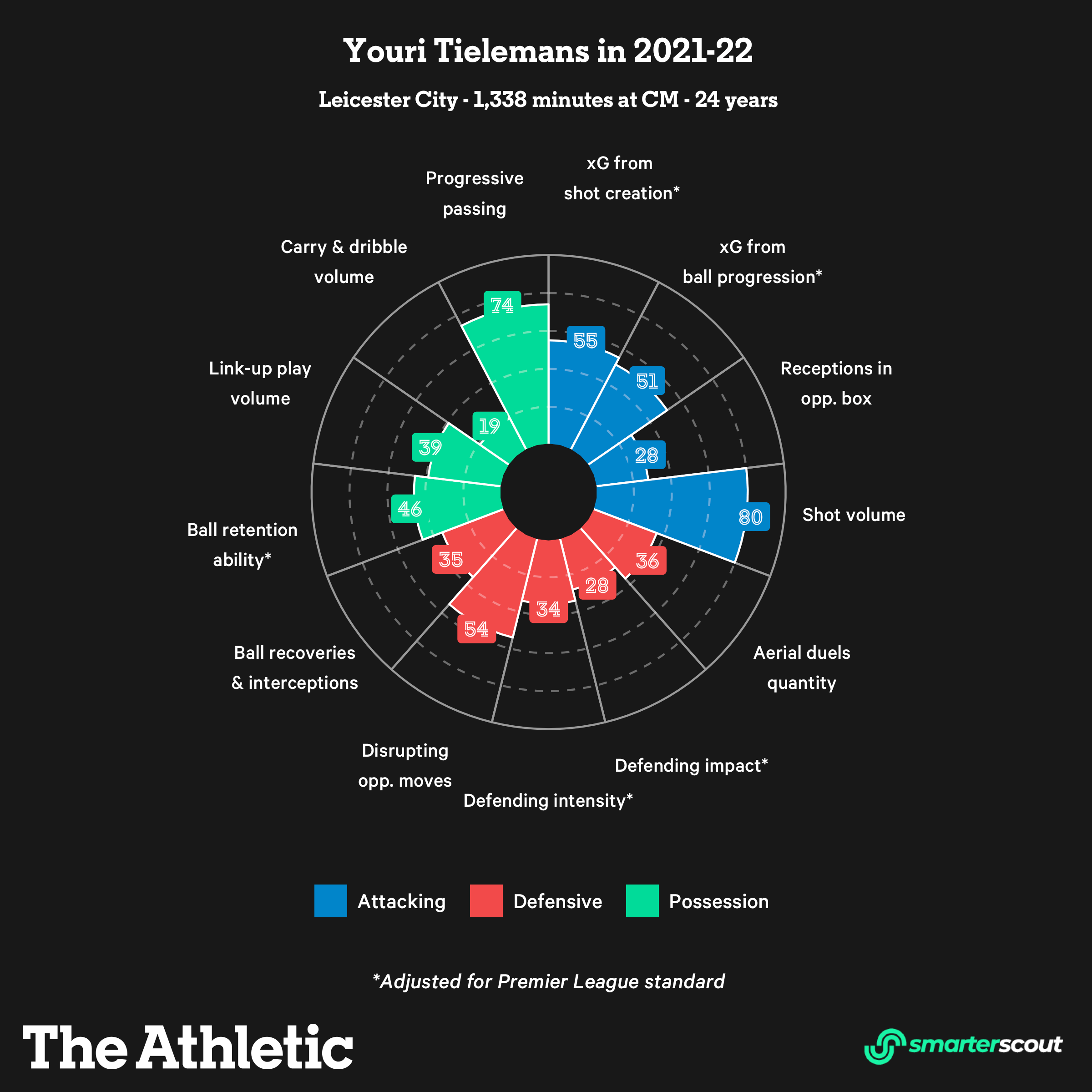 That isn’t his role. Using data from StatsBomb via FBref, we can see just how important Tielemans is towards Leicester’s progression up the field. Tielemans’ progressive passes — his passes in the final 60 per cent of the pitch that move the ball towards the opponent’s goal at least 10 yards from its furthest point in the last six passes, or any completed pass into the penalty area — are the highest in the squad when looking on a per 90-minute basis. 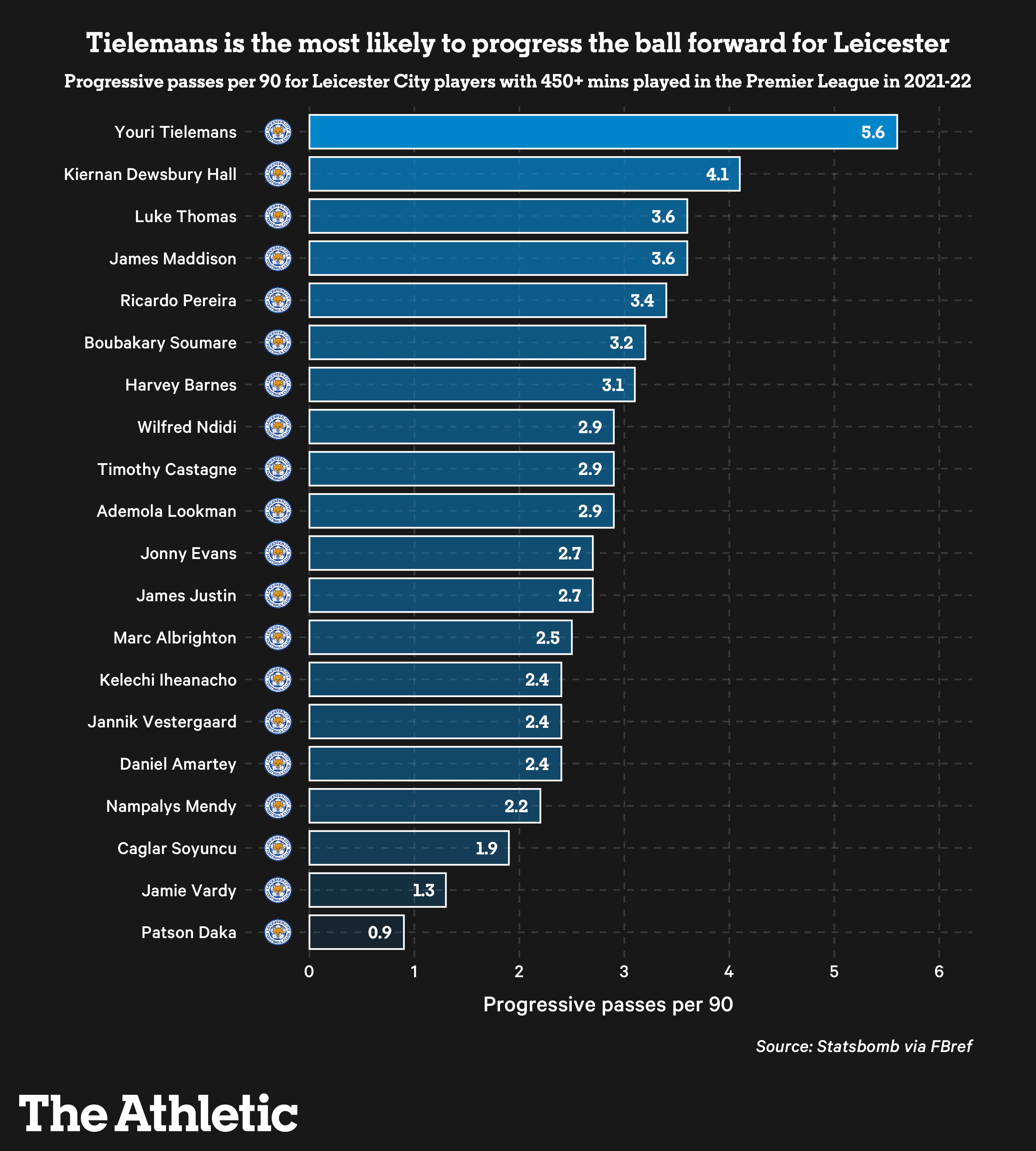 When Leicester weren’t playing a 4-2-3-1, following the emergence of the left-sided Dewsbury-Hall and when Ndidi was fit, Tielemans moved into a No 8 position, to the right of the centre, and while he was still working centrally, it is notable this season how much he has started to pull wide to get out of the congested areas so he can receive the ball in space high up in the opposition’s half, as shown in the heat map of his received passes. 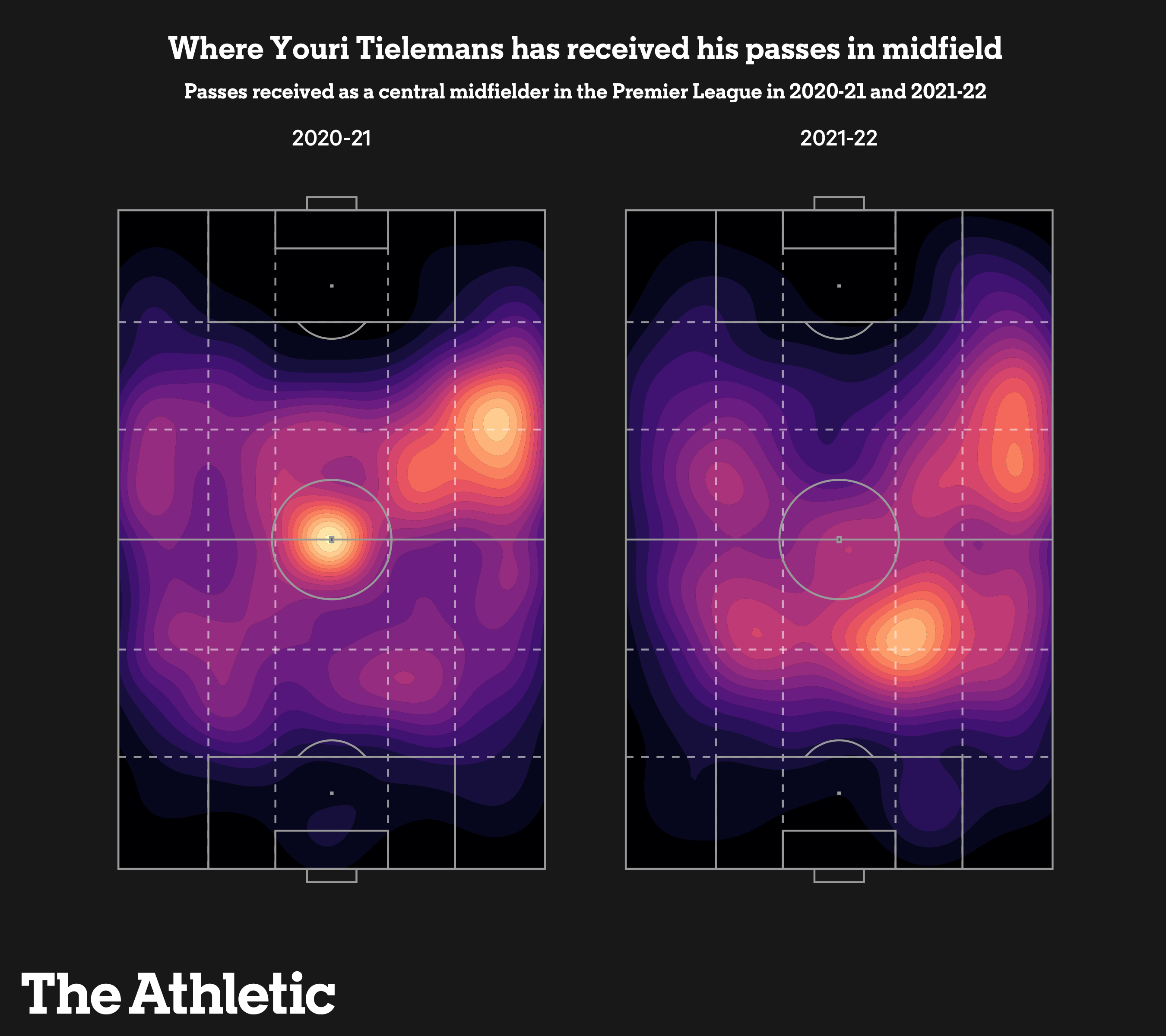 He will be difficult to replace when he does leave — but not impossible. Rodgers says he is looking forward to revamping the squad that hasn’t changed much during his three and a half years there  – Tielemans was one of his first permanent signings after his loan spell from Monaco – and the club is preparing for a busy summer.

If an offer comes in for Tielemans they will have a decision to make – bank it, even if it is a loss on the £32 million they initially invested in him (that figure was expected to rise depending on performance clauses), or keep him for another campaign and let him ride out his contract. It will be a big decision.

In the meantime they will be looking now for a replacement, a player with similar attributes and, using data to analyse and compare, there are a few around.

Vitaly Janelt at Brentford is one. The 24-year-old defensive midfielder from Germany now has Premier League experience under Thomas Frank. A product of the prolific RB Leipzig academy, Janelt is similar in that he looks to progress the play and isn’t afraid to shoot. At 6ft tall, he also would add more physicality, which Rodgers is looking to do. 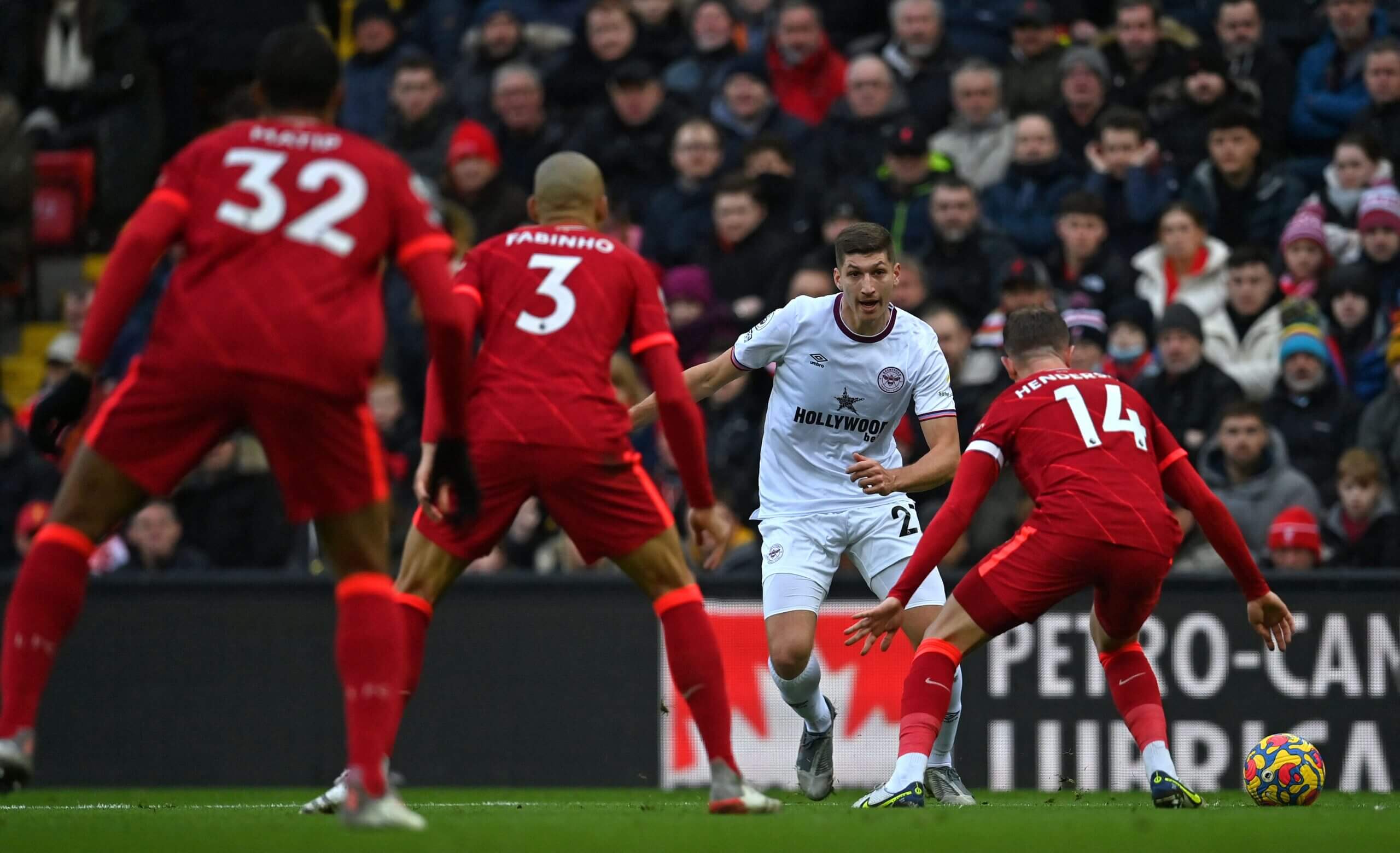 Jon Moncayola would be another interesting option. He turned 24 yesterday, in the age bracket that Leicester prefer to invest so they can develop talent, and the midfielder has been a regular at Osasuna in La Liga for the past few seasons. He is technically talented and looks to progress the ball forward when he gets it but he would need time to adapt to English football, and maybe Rodgers doesn’t feel he has that time to wait, as he has done with Boubakary Soumare.

Then there is Conor Gallagher, who has impressed on loan at Crystal Palace from Chelsea this season. Palace want to re-sign him on loan for a second campaign and would be in the box seat if Gallagher is not deemed ready for the Chelsea first team. It would be a long shot and Gallagher seems to be more of a ball-carrier than playmaker, but he would bring youthful energy and goals to Leicester’s midfield.

“The problem is the gossip and speculation around Tielemans shines a light on him,” Rodgers says. “For me, he’s still the same guy and his professionalism is first-class. That’s why I always play him.”

Maybe it is not the end of the road for Tielemans at Leicester. If he assesses his options this summer and doesn’t receive the desired opportunity, he may decide to sign the contract that has been on the table, gathering dust, for the best part of two years.

But just as he has been keeping his options open, so must Leicester.

Sean Dyche, Ulla Klopp and whoever saves Everton: Who deserves a statue at your Premier League club?