Unlike their opponents Hertha BSC, who were fighting for survival in the Bundesliga, yesterday was a typical carefree end-of-season-fixture for Borussia Dortmund: A nice pre-summer kickabout with nothing to play for, perfect weather conditions and their brand new kits on display.

For BVB, the game, a 2-1 win of the ordinary kind, was meaningless after a frustrating first campaign under manager Marco Rose that still resulted in a second place. This day was all about emotional farewells anyway.

Some legends said goodbye: Michael Zorc, who spent 44 years at the club as both an iconic player and sports director, as well as Marcel Schmelzer, who is ending his career after 17 years as a loyal servant to the black and yellow. Both were honoured with gigantic banners, chants and shared many tears with the 80,500 supporters.

In contrast to his performances during the last two and a half seasons, Erling Haaland was bid farewell in a comparatively unspectacular fashion, just days after his move to Manchester City had been confirmed.

After Roman Burki, Marwin Hitz, Axel Witsel and Dan-Axel Zagadou, who are also leaving, the club thanked the 21-year-old for his contributions and wished him all the best moments before kick-off.

Untypical for the colossal striker, he appeared almost shy as it was his turn to approach the Yellow Wall, where he was greeted with cheers. He patted his chest over his heart and, for one last time, joined the fans with a collective wave.

A few hours previously some of them told The Athletic how they would remember him.

Even though not many players were able to put their stamp on club and league as fast and vigorously as Haaland did since joining from RB Salzburg in January 2020, his name wasn’t mentioned much during the pre-game chatter around the Signal Iduna Park. Zorc, Schmelzer as well as potential new arrivals were the dominant topics among the Dortmund faithful on this Saturday afternoon.

It seemed as if they had already digested Haaland’s departure. “It was just a matter of time from the beginning,” one supporter in a Haaland shirt told The Athletic in the beer garden just beside the stadium.

A sentence that was echoed many times by others around the ground.

After all, it was clear from the moment Haaland signed that Dortmund was going to be a springboard to the pinnacle of world football for him. In fact, hadn’t the club bent their own principals by agreeing to a (rather player-friendly) release clause — something they vowed to avoid after helplessly watching Mario Gotze join Bayern in 2013 — he would have never worn the BVB shirt as CEO Hans-Joachim Watzke recently confirmed.

It has been nothing but an honour to wear this shirt. At @BVB, I’ve spent memorable moments, met special people, not to mention a fanbase that has been always our extra man on the pitch. The Yellow Wall is truly incredible. I’ll never forget any of this! Thank you all! 🖤💛 pic.twitter.com/MegplT4y7B

“At the end of the day we have to be thankful that we even had him,” another fan chimed in while enjoying a cold beer. “He was destined for bigger things, I don’t blame him for taking the next step, we knew it was coming sooner or later.”

On the one hand, the inevitability of Haaland’s eventual departure softened the blow. In addition, he neither forced his way out (Ousmane Dembele was mentioned as an example) nor did he join the club BVB has doggedly but fruitlessly been chasing: Gotze, Mats Hummels and Robert Lewandowski all changed sides for Bayern Munich in the years after losing to them in the Champions League final 2013. A dagger to the black and yellow heart.

On the other hand, the ever-present rumours became even more irritating by the week, especially because Dortmund were struggling with continuity and Haaland with staying on the pitch.

Fighting niggling injuries and ultimately missing 16 out of 46 games, he was making more headlines for transfer speculations than for his brilliance.

“I’m just glad, almost relieved the drama is over, it was a distraction,” Thorsten, a lifelong fan, said. “It’s gone on long enough, the most would have preferred clarity sooner.” A sentiment shared by many on this day.

For one die-hard middle-aged supporter however, it goes further. The hype about Haaland’s future and the dizzying figures of agent fees and salary enrage him. 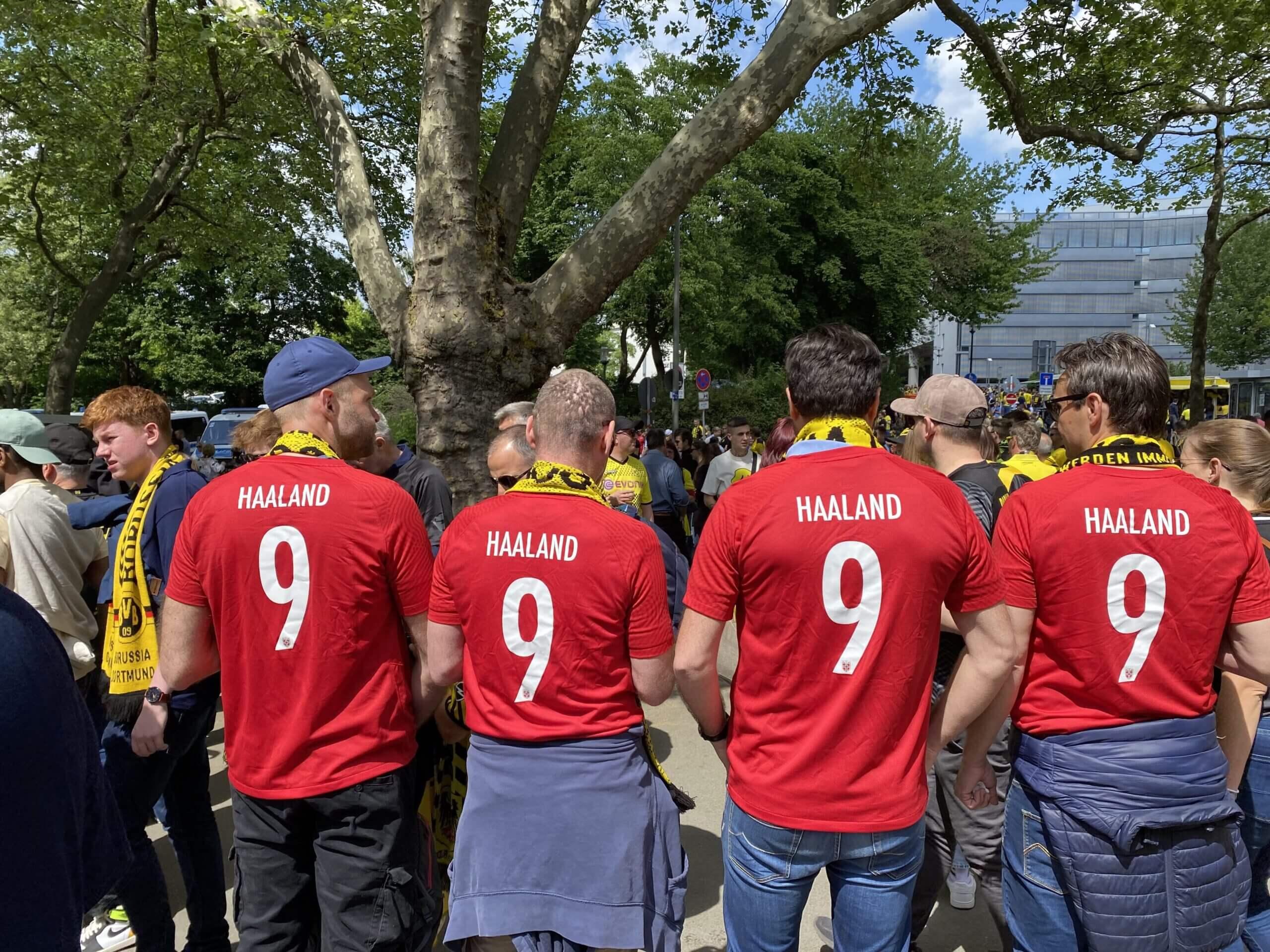 “I enjoyed watching him play but I’m happy he’s gone,” the man in a denim vest covered with Dortmund badges said. “All the noise, the millions of Euros thrown at him, this was bordering on a cult around one person, that doesn’t fit to us. I will not shed a tear for him, no-one is bigger than the club,” he added before a friend calmed him down and interrupted his rant.

With each person sporting a Haaland shirt walking by, kids, youngsters and pensioners, the impression of appreciation amongst the fans increased. Some stood out: Sven, Ole, Michael and Kristian, all proudly wearing Norway shirts with Haaland’s name printed on the back, came all the way from Oslo to see their favourite player’s last match in Dortmund. “He should have stayed longer,” Sven insisted.

While most of the local BVB fans would have preferred that Haaland listened to his compatriot’s advice, they will keep him in high regard.

“Despite the drama at the end it was a really cool time,” Kevin, a 21-year-old supporter who attended the game with three friends said. “He always gave everything, was a fighter on the pitch even when things weren’t going that well for us and scored so many goals.”

When asked about their favourite Haaland moments, their eyes collectively lit up and all the turmoil of the last months seemed forgotten. “I’d say his debut when he scored a hat-trick from the bench against Augsburg,” Kevin answered. His friend, previously very reserved, suddenly interrupted him: “No, definitely the goal against PSG,” a thunderous rocket to seal a 2-1 win in the first leg of their round of 16 encounter.

There have been so many moments to chose from, which is remarkable in itself considering the comparatively short time Haaland wore the badge. He scored 86 goals in 89 games while breaking numerous records in the Bundesliga and Champions League. He helped Dortmund win the German cup in 2021 — their first major trophy in four years — and made the supporter’s jaws drop almost every week.

Haaland gave the fans hope, world-class quality and authentic passion on the pitch. And although they knew the relationship was on borrowed time, they not only admired the art but also couldn’t help but falling in love with the artist. It’s a sentiment that almost every fan The Athletic asked confirmed.

“Definitely, we just ignored the fact that he was going to leave,” Kevin said. “He’s not only brilliant but brings a mentality to the pitch that energizes the crowd.”

Fittingly, Haaland had one of these moments in his last game. Having scored the equalizer via a penalty, he grabbed the ball, pumped his chest and animated the entire stadium to push for the winner. The fans responded and after Youssoufa Moukoko completed the mission in the dying stages of the game, they gave Haaland a standing ovation and chanted his name as he left the pitch for what probably was the last time in a Dortmund shirt.

“We have played football at Dortmund for 113 years, and for 111 years we played without Erling Haaland,” Watzke said recently. What he means is, in order to become a club legend like Zorc and Schmelzer, who were celebrated for a long after the final whistle, Haaland’s tenure in black and yellow definitely was too brief and perhaps too calculated by a career plan.

Consequently, Haaland’s chapter in Dortmund’s history books will be short, albeit colourful. Still, talking to the many fans in and outside the stadium this Saturday, it became quite obvious that it was chapter they wouldn’t want to have skipped.