After months of negotiations, Marcus Tavernier has completed a move to Bournemouth from Middlesbrough.

The 23-year-old, who has cost £10million ($12.1m) and has signed a five-year deal, has been on the radar since promotion to the Premier League was confirmed in early May and becomes the club’s first summer acquisition with a transfer fee attached, following the arrivals of Joe Rothwell and Ryan Fredericks as out-of-contract free agents.

In recent years, Bournemouth have made a conscious effort to sign young, homegrown and progressive players from the Championship and it is understood this was a large part of the reason why Scott Parker accepted the job as head coach last summer. Fans have watched Lewis Cook, David Brooks and Lloyd Kelly rise to prominence in the past five years, and people within the club expect Tavernier to join that list in the near future.

The versatile midfielder was always deemed a priority by Bournemouth in this window and, considering how light their 2022-23 squad still is at several positions, it is easy to understand why.

As far as Bournemouth are concerned, Tavernier’s flexibility makes the move a no-brainer.

While most supporters will roll their eyes at the unveiling of yet another midfielder, The Athletic understands he has actually been signed to play predominantly at left wing-back as Parker looks to shift to a 5-2-3 system, although he can also be deployed in central midfield or on either side of a central striker.

As full-back Jordan Zemura is the only natural left-sided defender in the squad not named Lloyd Kelly, Tavernier is expected to provide some much-needed depth on that flank.

Considering Bournemouth are also light when it comes to left-footed players in attacking areas, with Ryan Christie and Brooks (the Welshman is still working his way back to full fitness after cancer treatment wiped out almost his entire 2021-22 season) the only other two in the squad, it helps that Tavernier has shown he is comfortable taking up positions in the right channel to cut inside onto his left foot to shoot or thread a final pass.

We can trace back Bournemouth’s interest in Tavernier over five years to their pursuit of Matty Cash, now of Aston Villa and the Poland national team, when he was breaking through as a teenager at Nottingham Forest.

It is understood they scouted Cash extensively during the 2016-17 season but, because he was used in a range of roles from central midfield to No 10 to right-winger, Eddie Howe’s scouts were left wondering which of them was his strongest. There was also a feeling that Cash did not stand out as a potential Premier League-level talent at any of the positions the scouting department had watched him in.

Of course, Cash went on to establish himself as a promising right-back before a £14million move across the Midlands in the summer of 2020, has since cemented himself as first-choice at Villa, and is on course to play for Poland (he qualifies through his Polish mother) at the World Cup this winter after winning seven caps since his debut last November.

It is understood Bournemouth view Tavernier as a way of learning from their pursuit of Cash.

While Middlesbrough manager Chris Wilder similarly deployed Tavernier in a multitude of roles last season, Bournemouth believe he can establish himself at left wing-back the way Cash went on to do at right-back — and not just for them, but potentially at international level, too. Given the shortage of left-sided defenders in the current England set-up, there is a strong sense within the club that, if all goes well with his development, their Leeds-born new signing is well placed to help fill that void.

But how exactly will he fit in at Bournemouth?

Tavernier played almost two-thirds of his minutes in central midfield last season under Wilder and predecessor Neil Warnock, while also deputising on either flank, as the graphic below shows.

Bournemouth created plenty of chances down their left last season due to the telepathic passing patterns of Zemura, left winger Jaidon Anthony and left-sided central midfielder Philip Billing. Intriguingly, Tavernier has shown he can play all three positions in that fruitful triumvirate. 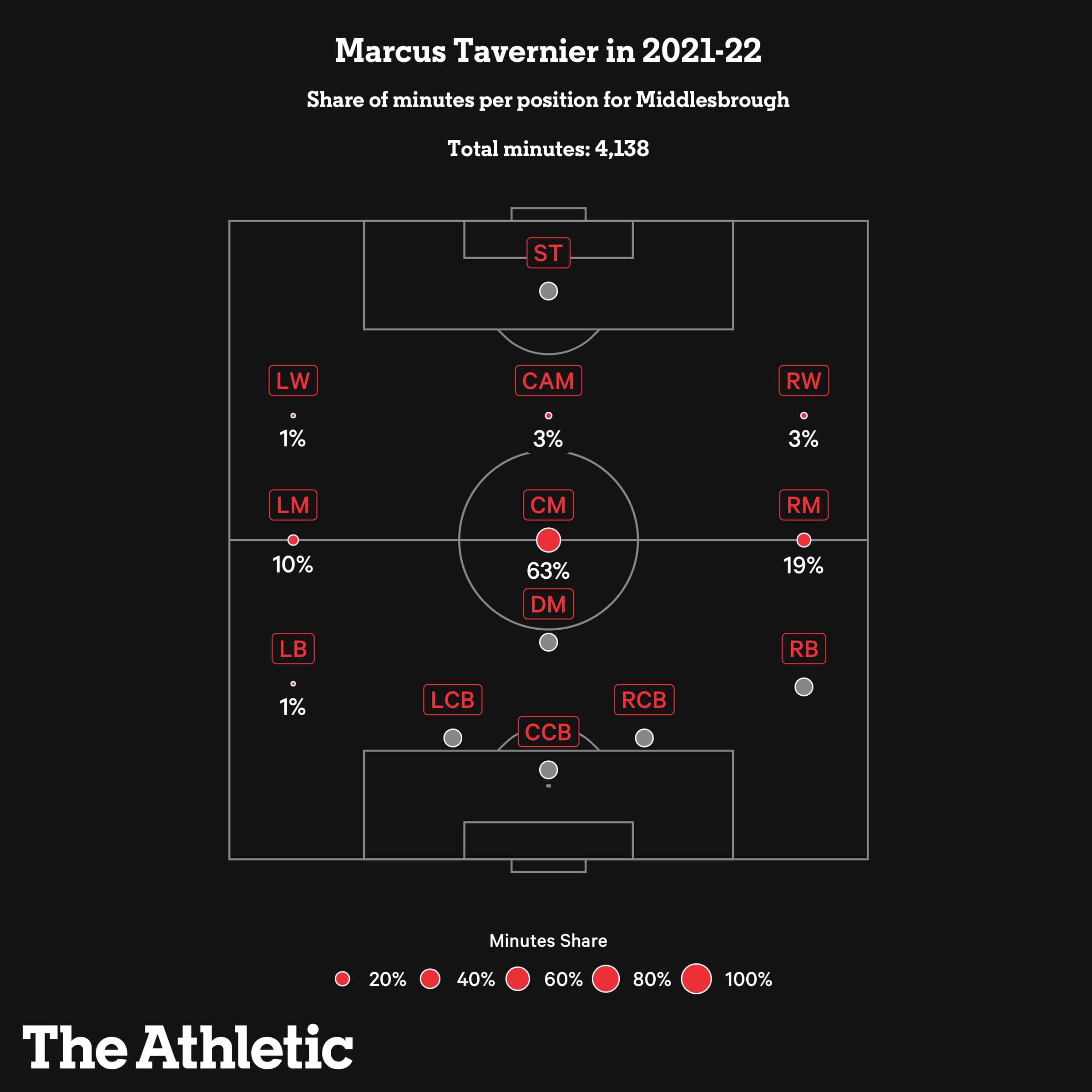 As his touch map below shows, the bulk of Tavernier’s touches in central midfield came down the left in almost exactly the positions he will be expected to take up as Parker’s wing-back on that side of the pitch. There is also a decent spread of action in advanced central areas just outside the opposition’s penalty box, which shows he can hold his own in the most crowded areas of the pitch. 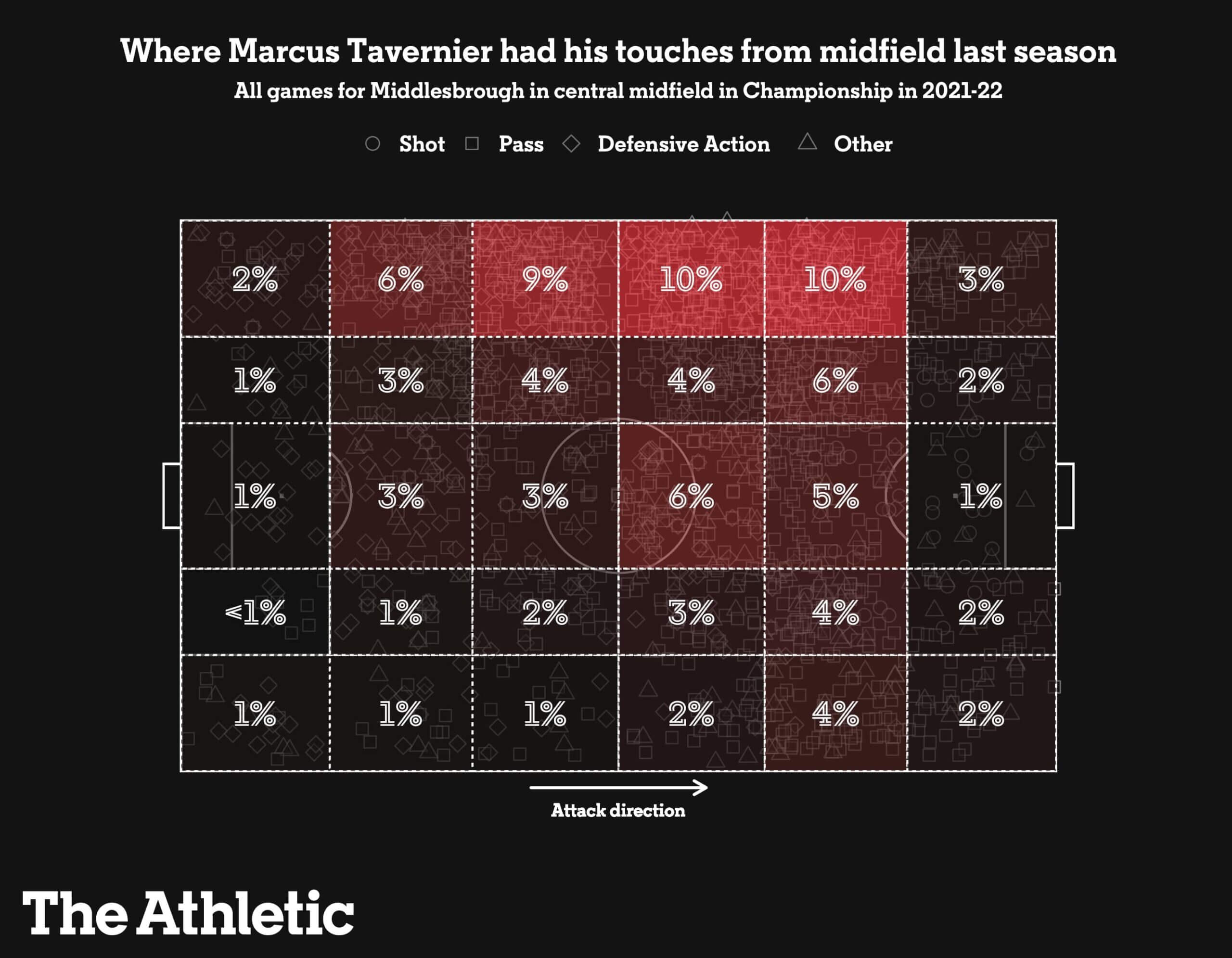 With an eye on their second game of the new season away to back-to-back champions Manchester City on August 13, The Athletic understands Bournemouth’s coaching staff view Tavernier as less of an adventurous left wing-back option, in the style of Zemura, but someone more comfortable drifting into central areas to help congest the midfield and stifle opposition build-up.

The 3-4-3 system Parker currently uses bears similarities with his Fulham team from the 2019-20 season, which ended in promotion via the play-offs.

In possession, Fulham were in a 4-3-3 shape, with Bobby Decordova-Reid as the right-winger. When they didn’t have the ball, he would retreat to a right wing-back position to make a 5-2-3/3-4-3. With Tavernier’s flexibility, there is a thought he could occupy a similar pseudo-wing-back role to Decordova-Reid’s when Bournemouth are up against the top flight’s strongest teams.

Smarterscout is a tool that allows us to analyse a footballer’s attributes and highlight their strengths and weaknesses using advanced analytics.

The pizza chart below gives Tavernier a rating from zero to 99 in various metrics, based on either how often he performed a certain action or how effective he was at it compared with others playing in the same position.

His chart for last season shows him to be a reasonably progressive player. His ratings for carry and dribble volume (69 out of 99) and progressive passing (62 out of 99) indicate he will often look forward in his actions on the ball. His expected goals (xG) from ball progression (65 out of 99) tell us there is roughly a 35 per cent chance that a new Premier League midfielder would be more dangerous in advancing the ball into dangerous areas.

But what stands out is the way Tavernier combines this ability to progress the ball with a relentless defensive edge, rating in the 83rd percentile for defending intensity and the 70th percentile for disrupting opposition moves. These figures indicate Tavernier is proactive when it comes to applying pressure and making defensive actions such as tackles, blocks and clearances, as implied by smarterscout’s algorithm. 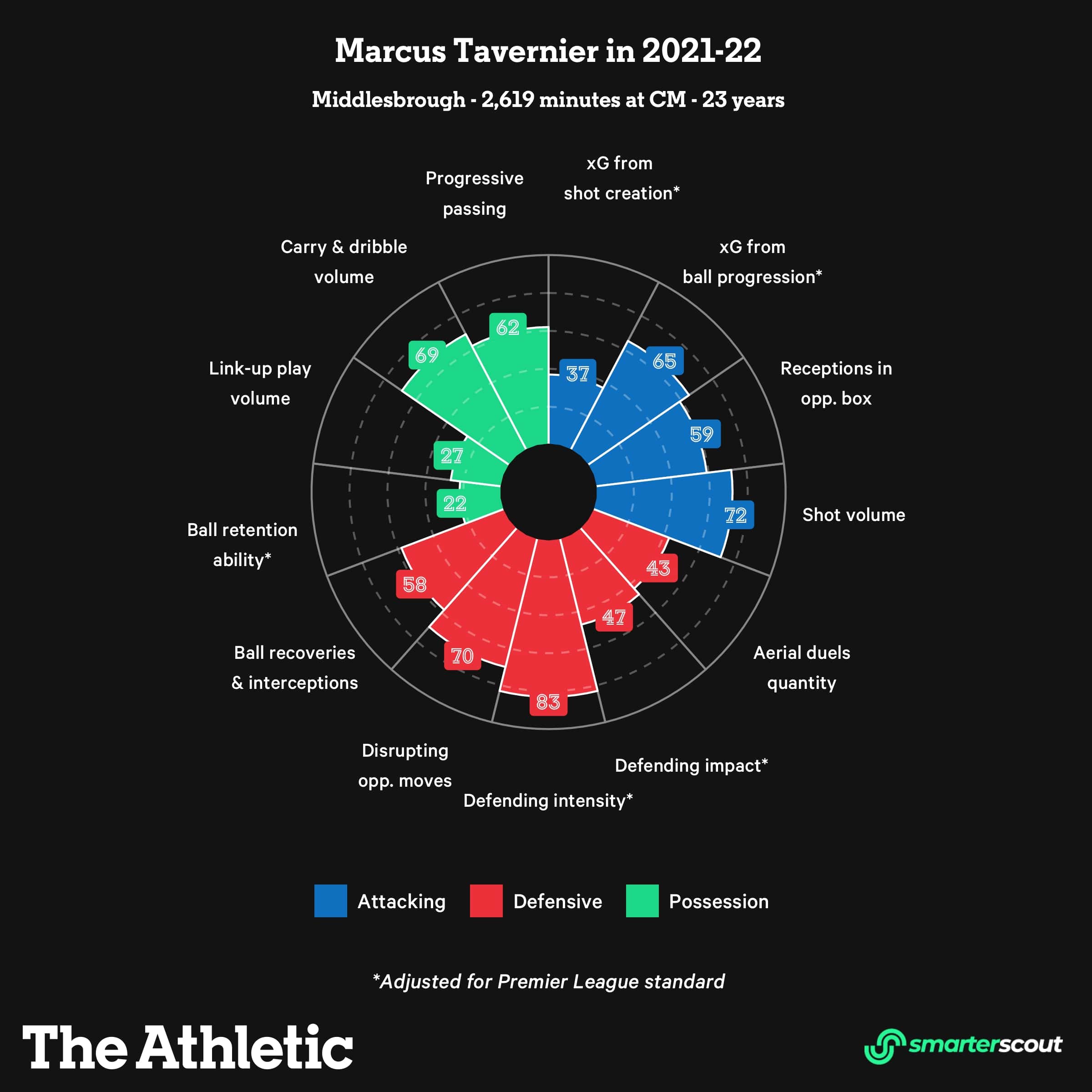 While he may be instructed to mark the space more than his man as a Bournemouth player considering they are likely to see much less of the ball than their top-flight opponents, his appetite for disrupting moves along with his eye for a direct route towards goal complements Bournemouth’s planned evolution into a transition-based Premier League team.

This is arguably the ideal combination of skills Parker will want from his players at this level. Bournemouth must remain defensively tight and focused for extended periods while also being able to shift gears and attack with speed on the counter. These are aspects of the game which, in theory, Tavernier’s pizza chart shows he can perform to a decent standard.

In practice, there is a variation in the way the Yorkshireman seizes the ball and then drags his team upfield.

The screengrabs below are from Middlesbrough’s 2-1 home win over play-offs-bound Luton Town in March.

As Tavernier moves to close him down, Luton right-back James Bree lays the ball off to team-mate Elijah Adebayo. Tavernier then presses Adebayo against the touchline… 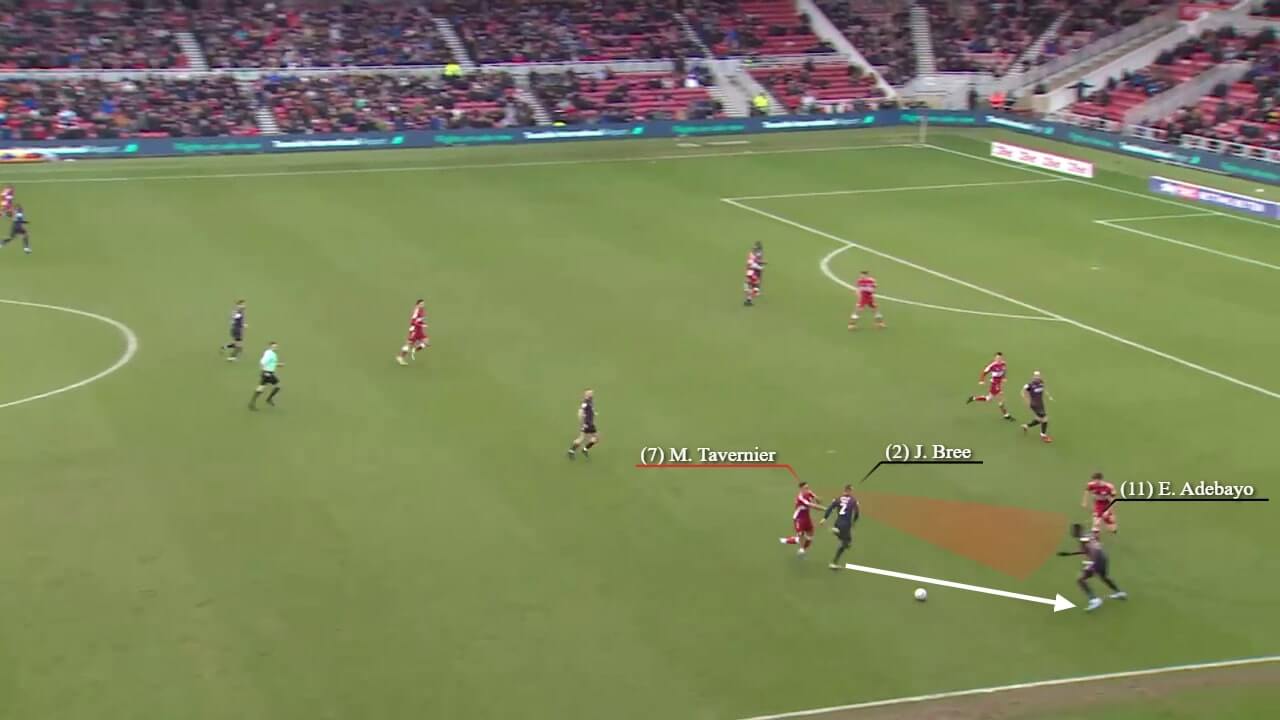 … forcing the forward into a loose touch, seizing possession and driving away towards the rest of the visitors’ exposed back line. 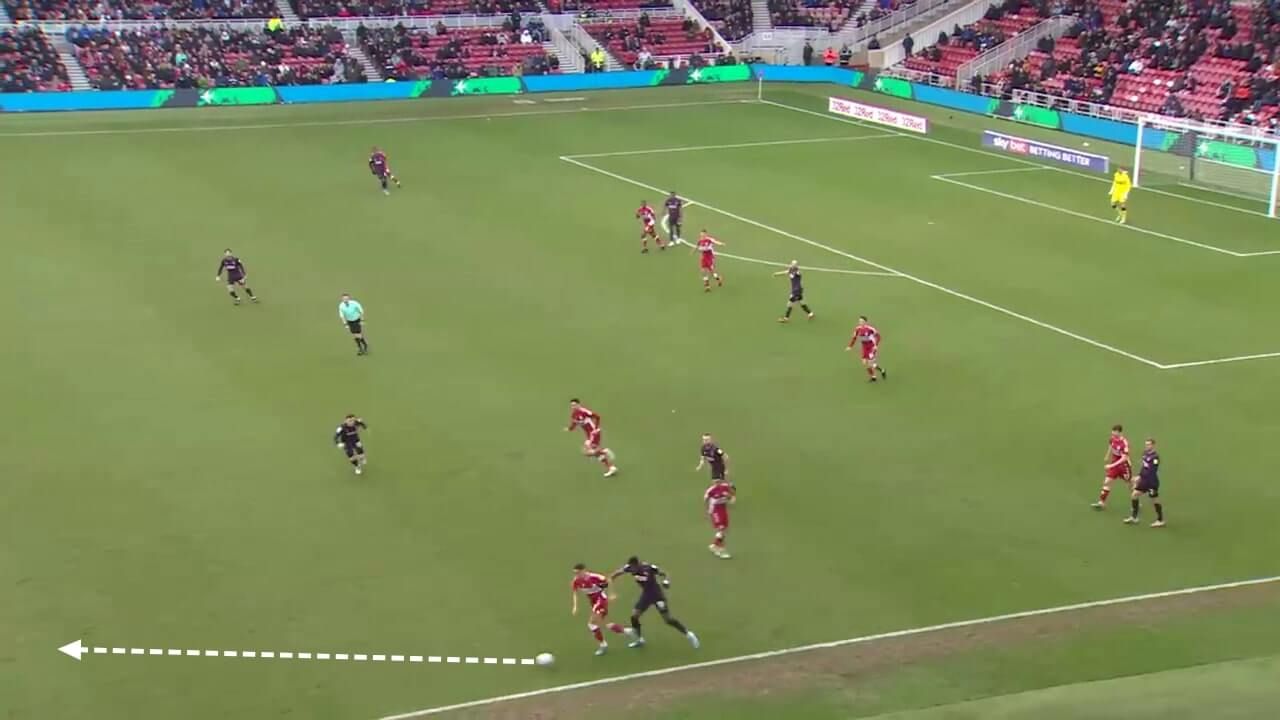 In carrying the ball upfield with such speed and directness, Tavernier’s run draws the attention of three Luton defenders, which allows Matt Crooks and Folarin Balogun to make unopposed runs beyond him.

Tavernier played the ball wide to Crooks, whose eventual cross did not find Balogun in the box. 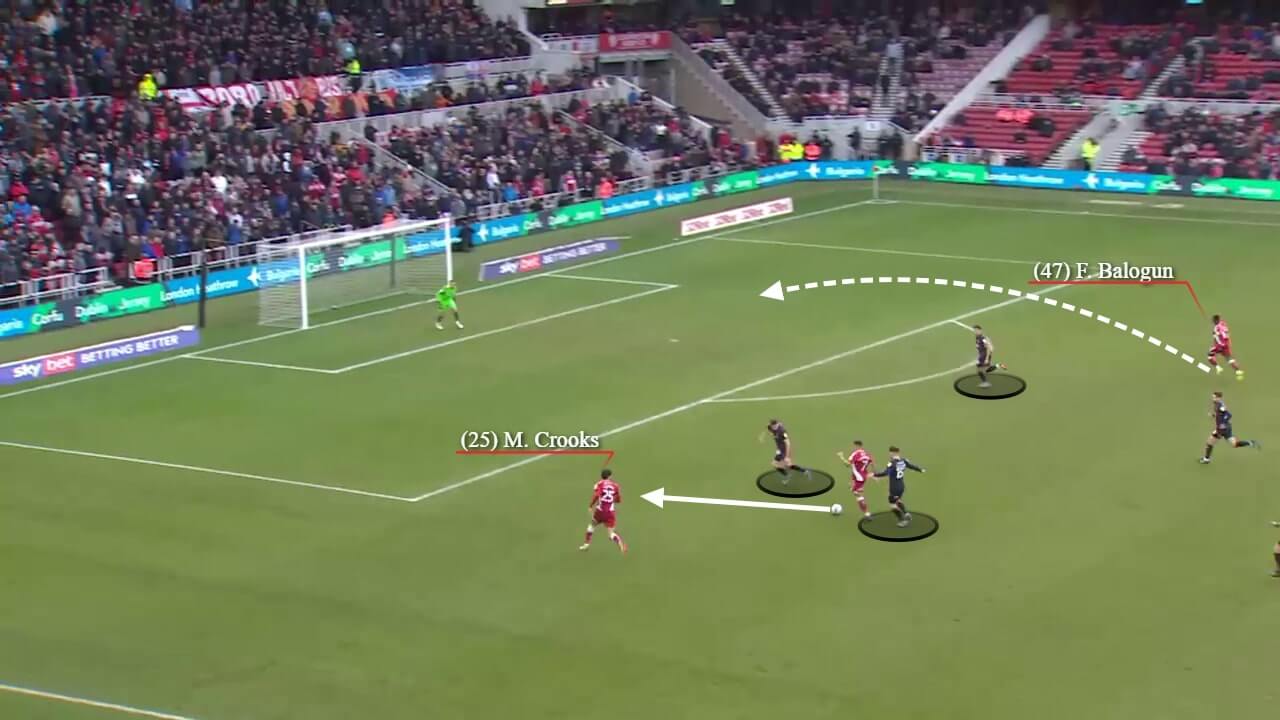 In a 4-1 win over Derby County three weeks earlier, Tavernier showed he is capable of winning the ball and propelling his team towards goal in a completely different way.

As the next screengrab shows, the Derby player in possession looks to play a pass out to their left, but the trajectory of the ball invites Tavernier to swoop in and intercept.

Note how Tavernier wins possession here through his anticipation and reading of the game rather than the dogged pressing to overwhelm his man highlighted in the Luton example. 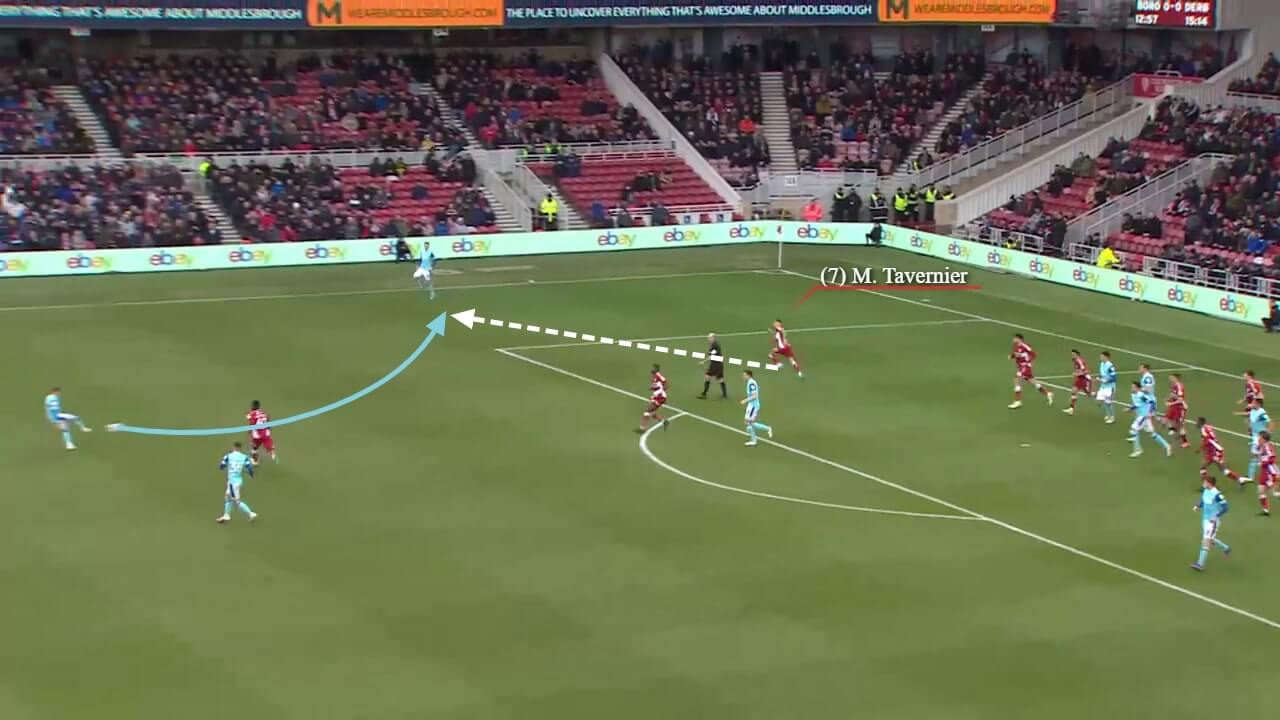 After putting Derby’s defenders on the back foot, Tavernier threads a perfectly timed through ball to Aaron Connolly to slice the back line wide open just as right-back Nathan Byrne shifts inside to track Balogun’s run. 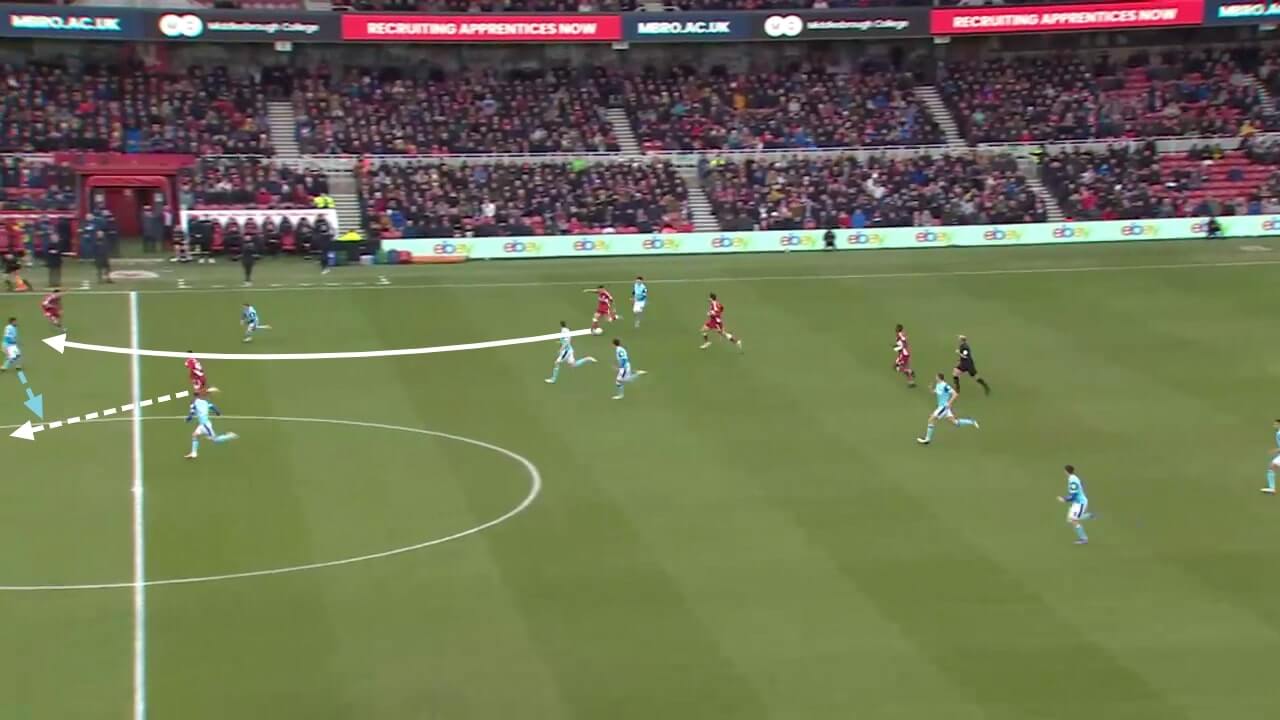 This resulted in Middlesbrough moving from one penalty area to the other in a matter of seconds and Connolly standing his marker up as the rest of Derby’s defence scurried to get back into shape. 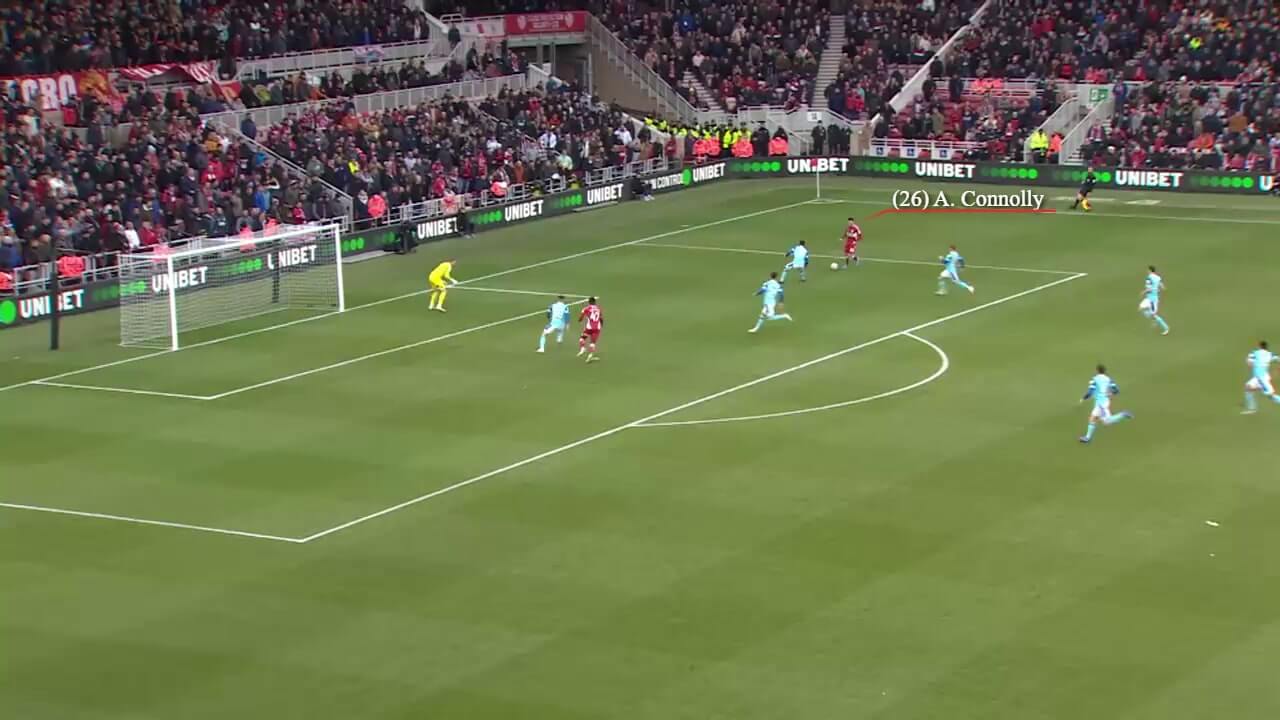 While Tavernier is not the new centre-back Bournemouth supporters have been baying for, he does occupy a number of roles his new team need numbers in and appears a nice fit for the direct style of football Parker intends to play in the coming season.

Derby County might be in League One, but the club has never felt more alive

Commonwealth Games 2022: hockey, cycling and Peaty back in the pool on day four – live!