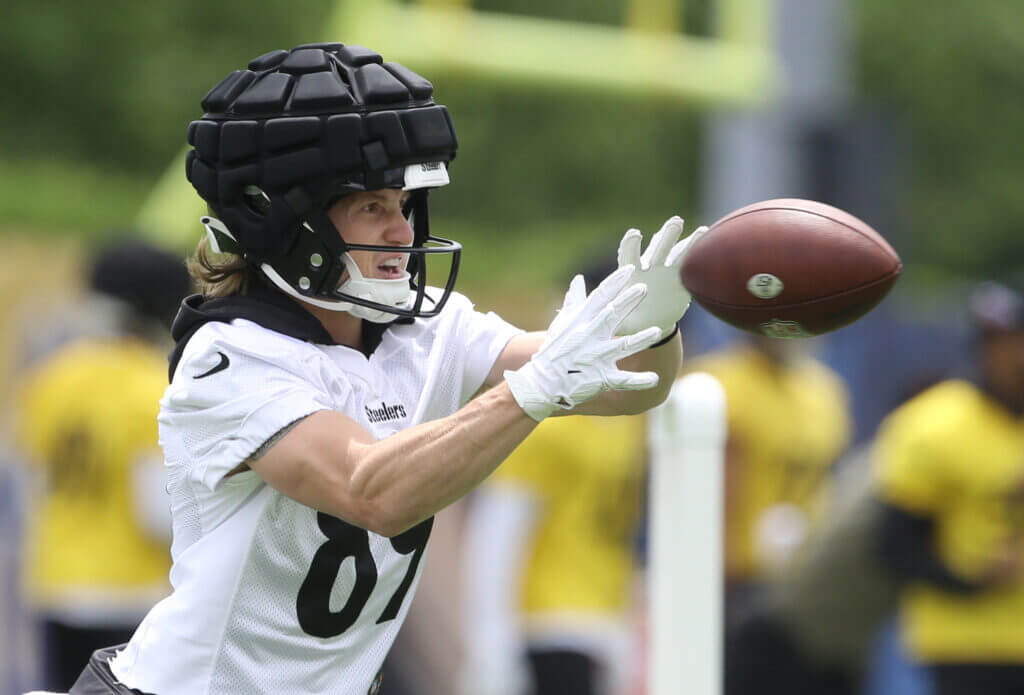 LATROBE, Pa. — Cameron Sutton is a pretty good all-around athlete who played baseball and football in high school. So, if anybody could spot a multisport athlete, it would be him.

Still, during the Steelers’ annual home run derby, he never would have looked at Gunner Olszewski and thought he was one of those two-sport dynamos. Being 5-foot-10, 178 pounds around a group of professional football players can do that.

“Now that you mention it, he had a good stick and was flying around out there, shagging balls,” Sutton said.

Olszewski didn’t win. That was Kenny Pickett, of course.

As is the case with many of his teammates, Olszewski’s past isn’t well known. He chose a tiny Division II school in northern Minnesota (Bemidji State) solely because he was promised that he could play football and baseball on scholarship.

Oh yeah, and not be redshirted.

And that’s what happened for two years. Olszewski played cornerback and was named a Division II All-American and Northern Sun Intercollegiate Conference Defensive Player of the Year in 2018. He left Bemidji with 310 career tackles and 13 interceptions, along with 1,350 return yards and one punt return touchdown, but his first love was always baseball.

And if not for a bad break, Olszewski would likely be tooling around in the minor leagues rather than finishing up his first training camp with the Steelers and catching touchdown passes from Mitch Trubisky.

During the first game of his junior year, while playing at U.S. Bank Stadium in Minneapolis, Olszewski stole second base and broke his right hand.

“I got back to the dugout, and it swelled up,” Olszewski said. “I was hoping to get drafted that year for baseball, and I was going to call it quits and just go play baseball. I got to play my senior year of football and got some interest from the NFL teams, so I kind of let that decision be made for me. That game was the last time I played baseball.”

It’s safe to say now that it was the best break of Olszewski’s life.

After Olszewski spent three years with the Patriots and was named first-team All-Pro in 2020 as a returner, Bill Belichick decided not to pick up his restricted-free-agent tender this spring, which would have paid him $2.4 million. Days later, Olszewski was on the phone with Mike Tomlin with an offer of $4.2 million for two years.

The Steelers got their much-needed punt returner. If they expected anything more, they sure didn’t tell Olszewski. Four weeks into camp, Olszewski, who had nine career receptions for the wide receiver-needy Patriots, has been as impressive as any receiver other than George Pickens.

“We didn’t talk about that,” Olszewski said. “He told me I was going to be a Pittsburgh Steeler and gave me a contract that made sense for both sides. That was pretty much it. I came in and worked. I don’t assume anything. I just play ball every time I step on the field, and that is what Mike Tomlin coaches.”

As training camp wraps up at Saint Vincent College, Olszewski has a real chance to contribute on offense this year.

The Steelers already know he’s their punt returner. But while he might not exactly be as skilled or refined as other Patriots undrafted slot guys such as Julian Edelman, Wes Welker and Danny Amendola, he has shown traits over the past month that have caught the eyes of decision-makers like offensive coordinator Matt Canada.

Not only has Olszewski been consistent in practices — where his only speed is full tilt — but he also transferred that over to the first preseason game, catching three passes for 47 yards, including a 13-yard touchdown reception from Trubisky, which came one play after a 25-yard gain on a nifty catch-and-run on third-and-6.

New squad but @GunnerOlszewski is still a playmaker.

“I really like him. I like him for his toughness, I like him for his ball awareness, his ball savviness, and I don’t just mean catching the ball,” Canada said. “His ball awareness, his ability to block, his ability to get guys where they want to be. He plays with great passion. He is a guy who is trending up for us now with the way he is practicing and the way he played for us on Saturday.”

The Steelers don’t want to get too high on Olszewski based on practice and one preseason game. He had similar success in New England during the preseason, only to disappear on offense during the season. It makes sense. Olszewski is a relatively inexperienced receiver.

He played cornerback throughout college. It wasn’t until his pro day at Minnesota that a Patriots coach approached him about a move to wide receiver. New England signed him as an undrafted free-agent project, but it never did quite work out on offense. Olszewski averaged just over 80 offensive snaps per season while with New England.

“It might surprise some people, but it doesn’t surprise me,” Olszewski said. “I have goals, and I set out to do things on the offensive side of the ball week in and week out. I feel like I fit in with how the Pittsburgh Steelers play football. Toughness means a lot to them, and Mike Tomlin preaches that every time I step on the field.”

That cannot be denied.

Special teams coordinator Danny Smith once joked that Olszewski is so fearless that he’s worried he might kill himself on the field. Surely that’s a term of endearment from the high-energy Smith.

“I guess so,” Olszewski said if he takes Smith’s comments as a positive. “He watched every preseason special teams clip from around the league, so I am sure he has seen every time I have touched the ball in my three years in New England. He knows the way that I play and the way that I run. That’s the way he coaches. I think Danny is going to kill himself the way he coaches.”

Olszewski has played all three receiver spots in camp but is tailor-made for the slot. His shiftiness was on display against the Seahawks. And for a guy who has relatively little experience as a receiver, he is football-smart.

“He is making the most of his opportunity,” Trubisky said. “He is a football guy, and he works his tail off. He never gets tired and runs all day. He is always in the right spot at the right time. He is taking advantage of the opportunity. He is a guy who you can trust will be in the right spot.”

Said Pickett: “He knows coverage and knows what the quarterback wants to see and how we are seeing it from the pocket. He just knows how to get open. He is a football player. A high-IQ type of guy.”

High IQ and tough. Even if Olsewski doesn’t get a chance at playing receiver, he will be a part of the special teams. In 2020, Olszewski led the NFL with 346 punt return yards and a 17.3-yard average. He returned kicks and punts, but it appears that the Steelers are interested, at this point, solely in his punt returning skills.

“I want the ball,” Olszewski said. “It is the biggest high in the world when you have the rock in your hands on a Sunday. Anytime I can touch it, I want to touch it.”

Maybe that’s just the catcher in him coming out?