Even the ultimate Blues optimists were somewhat shocked when the final seconds ticked off a 4-1 victory over Colorado on Thursday.

There are adjustments and improved execution from game to game in the NHL playoffs, and then there’s what happened at Ball Arena in a 48-hour span.

The Blues went from a team that looked like they could be swept by the Avalanche in the second round to a club that came home with a 1-1 split in the best-of-seven series. And while a forecheck that was AWOL in Game 1 was a significant factor in the win, the defensive display in Game 2 was downright remarkable.

“Our D-corps was really good,” Blues coach Craig Berube said afterward. “They were up in the play. They carried the puck out of our zone. They were up on the breakouts carrying pucks — (Justin) Faulk, (Nick) Leddy and (Colton) Parayko especially. They were up there all night. You’ve got to battle pucks out, and I thought our team did a really good job with that.”

The Avalanche’s lone goal in Game 2 was a power-play tally from Gabriel Landeskog. Of the Avs’ top five goal scorers in the regular season, the captain has the lone goal, and with it coming on the man-advantage, that means they don’t have a five-on-five goal from Landeskog, Nathan MacKinnon, Mikko Rantanen, Nazem Kadri or Cale Makar. In fact, of their eight combined points, only five have come at even strength.

So how did the Blues do it? Let’s break it down by comparing some clips from Game 1 and Game 2. We’re going to look at their play in the neutral zone, their defensive gaps and their zone exits.

The Avalanche have the puck behind their net and take note of where Robert Thomas and Vladimir Tarasenko are positioned — Thomas pressuring the puck-carrier and Tarasenko covering the wall. 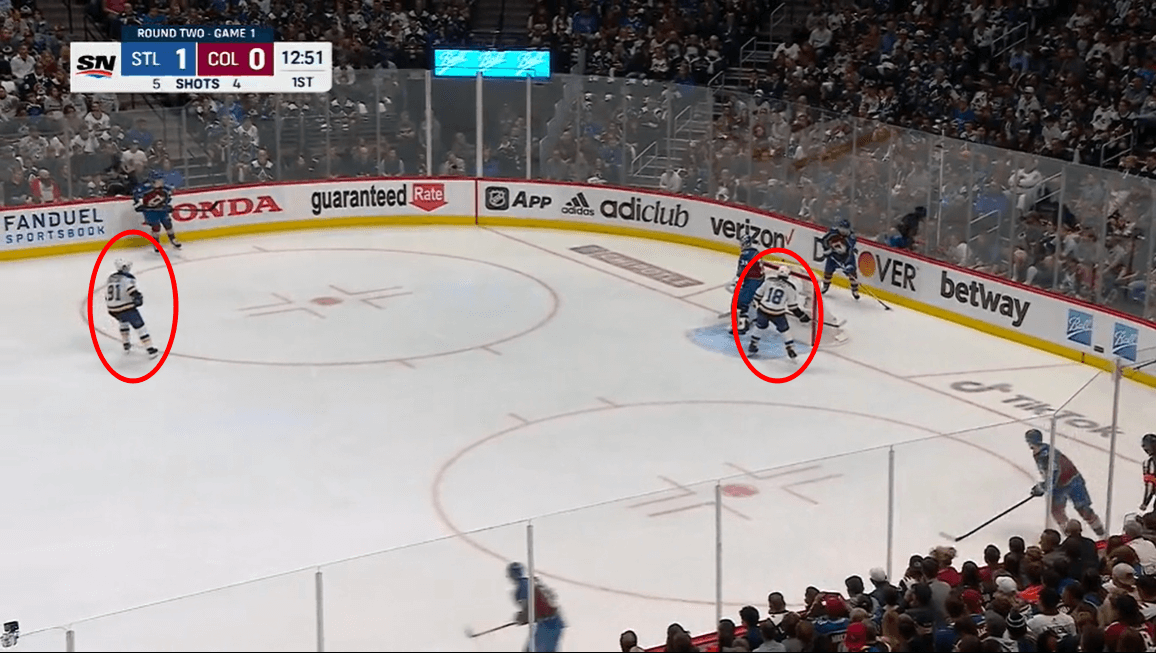 How did it play out?

The Avs’ Devon Toews hits a teammate with the puck at the red line, and with two quick passes, they are barreling into the offensive zone with speed and get a quality shot on goal.

Later in the first period, something similar happens.

The Blues are pressuring the puck, but the Avs complete the pass to their blue line, moving it beyond three attacking defenders. They gain the offensive zone, where MacKinnon does his thing, skating freely around the zone before letting go of a shot. Yes, it’s from the perimeter, but MacKinnon is always dangerous when he’s moving like this.

Now let’s look at the Blues’ approach in the neutral zone in Game 2.

The Blues are backed off the Avs’ net. Brayden Schenn puts pressure on MacKinnon as he attempts to exit the zone, and Ivan Barbashev puts some heat on Toews. The puck is turned over to Faulk, and seconds later Vladimir Tarasenko is taking the puck back into the offensive zone.

Here’s another clip from Game 2 in which the Blues’ pressure in the neutral zone leads to an Avs turnover. Landeskog loses his footing, but that’s perhaps because David Perron steps up to confront him. Either way, O’Reilly picks up the loose puck, and the Blues take possession.

In Game 1, Colorado is moving the puck through the neutral zone, and the puck is on the stick of Landeskog as the Avs get to the blue line.

We’re going to stop the clip at that point and break it down.

OK, now with the video paused, let’s look at Faulk’s gap. He’s been one of the Blues’ best defenders all season, and in the situation, the gap is not bad. He’s upright and just a few feet away Landeskog coming into the zone. 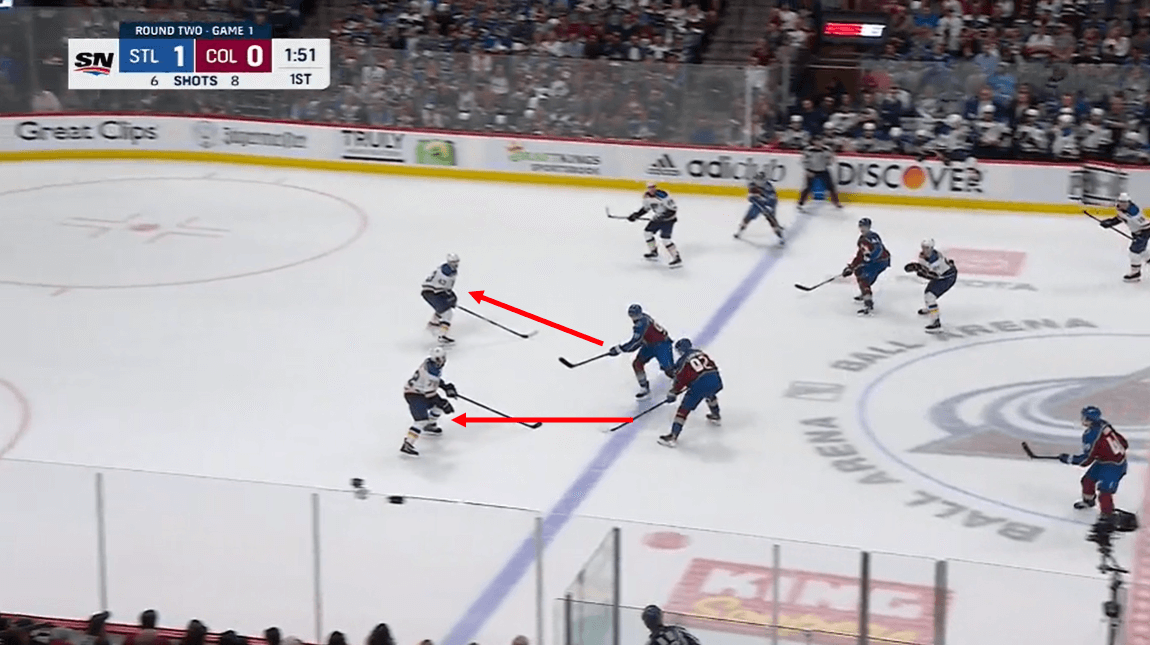 But the issue here for Faulk and defensive partner Calle Rosen is that they’re backing into the zone, allowing the Avs to dictate the play. And as a result, they’re able to work the puck around the zone and back to the point, where they get a decent shot off that requires a save from Blues goalie Jordan Binnington.

Now let’s look at the tight gap play in Game 2, and it’s Faulk who makes the quality play. This time, it’s not the blue line, it’s the red line, but his decision to step up on the Avs player forces a turnover, which Rosen recovers and skates out from behind the Blues’ net.

This is something they didn’t do in Game 1 — getting a piece of players — to try and slow them down.

First, Faulk bounces a clearing attempt off the boards, but it’s picked off by Colorado. He tries it again with a pass to Tarasenko, but that’s knocked loose and the Avs eventually put a solid shot on net.

In another clip from Game 1, Parayko tries a short pass to Barbashev to escape. But heading off for a line change, Barbashev sends a cross-ice pass that ends up in the hands of the Avs, and Binnington has to scurry to make a quick save.

But in Game 2, the Blues were much smoother in this area, and it seemed like they were trying to do more skating than passing against the Avs.

In the first clip, Leddy leaves the puck for Perron, who drops it back to Leddy, and he carries it himself cleanly into the offensive zone.

In another effective zone exit, Leddy wins a race to the puck, which was something Berube said after Game 1 that the Blues needed to do more of. He passes the puck to Faulk, who gives it back to Leddy, who skates it through the neutral zone and then dishes it off as the Blues enter the offensive zone.

Those were three facets of the game where the Blues were much improved from one game to the next.

“We’ve got to stay composed, under control, and find that momentum each shift because they just keep coming at you, and it’s all five of them,” Perron said. “They do a great job. I thought we were pretty composed. We did a great job from the get-go.”

From the goalie’s perspective, Binnington felt the same way.

“We played a connected hockey game,” he said. “We were all supporting each other. We just trusted our game. We talked about controlling the puck and tracking back hard and trying to outnumber them all over the ice.”

Now comes the hard part, replicating it in Game 3 on Saturday at Enterprise Center.

“Just prepare for another battle,” Berube said. “You look at tape, and you go over things. Maybe there’s some things that you can expose a little better. But it’s playoff hockey. It’s going to come down to competing at a high level, winning battles, and making sure you’re playing with good structure.”