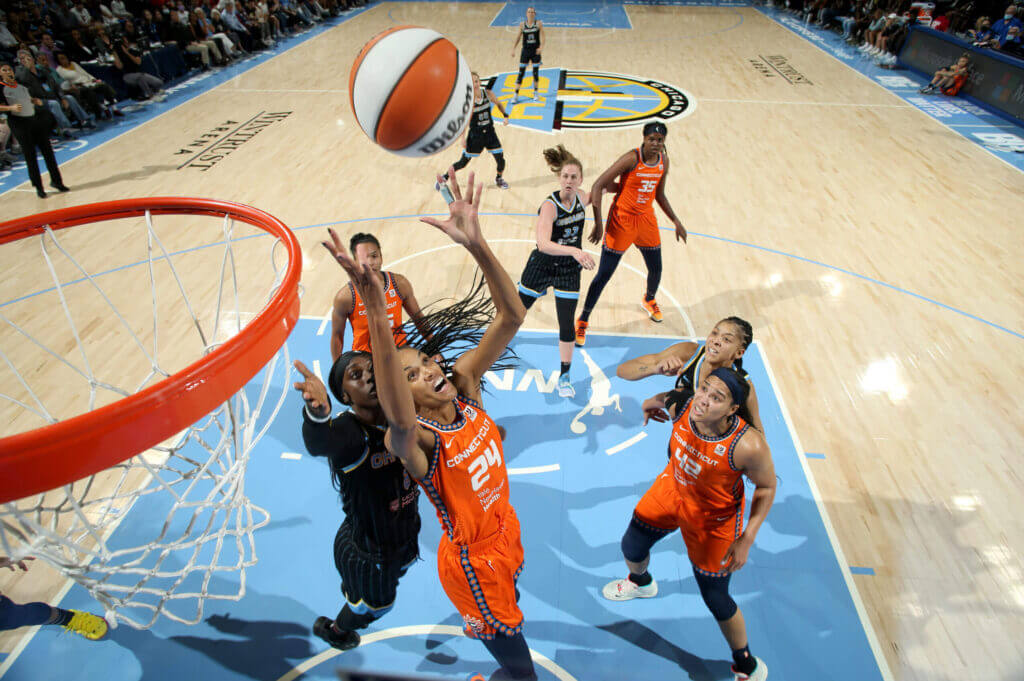 CHICAGO — Sun guard Courtney Williams felt Sky guard Kahleah Copper’s grasp on the ball as both players latched on for the rebound. Neither released the ball even as they crashed to the court. The tighter the other’s grip, the more determined each became to not let go. Referees explained that obviously the jump-ball play was over, imploring them to move on before hitting each with a technical foul. Teammates had gathered around. Williams and Copper remained on the Wintrust Arena court with their hands locked around the ball trying to wrestle it away from the other.

“We dogs,” Williams said, “trying to get to it anytime we step on the court. It’s playoff basketball. We’re gonna compete.”

Ultimately, Copper came away holding the ball after their tussle. It was the rare physical battle that the Sun lost in Sunday night’s 68-63 Game 1 semifinal victory in Chicago. Williams and the Sun were satisfied enough to come away with the win.

Even Sun players called the win a “steal,” igniting momentum with a road win and breaking out of a six-game slump against the Sky. The Sun understood that the narrative — dropping all four regular-season games this season and losing two games in Chicago last season to be eliminated 3-1 from the playoffs — needed a rewrite.

“We’re living in the moment,” Sun forward DeWanna Bonner said. “We’ve got a different team than last year. We don’t have anything to prove. We’re just playing in the moment. It’s a new season.”

The Sun’s identity is wrapped up in being a physically imposing team. That’s been the case all season, including the games in which they fell to Chicago. On Sunday, the plan was to avoid falling into a first-quarter hole to simply make life difficult for the versatile and balanced Sky so they could finally come away with a different result.

The Sun flustered Chicago into shot-clock violations and sloppy turnovers (12 of them in total, which the Sun converted into 20 points). That helped the Sun take a first-quarter lead for the first time this season against Chicago.

The Sun also beat the Sky in areas where Chicago typically thrives, outscoring the Sky 36-26 in the paint and outrebounding them 47-36. The Sky score 52.3 percent of their points in the paint, but they were contained to only 38 percent of their points coming inside. Azurá Stevens made her lone shot (out of seven attempts) on the line of the lane, while Courtney Vandersloot, whose ability to penetrate is a Sky strength, earned just one bucket that way and finished 2-of-8 shooting overall for five points.

The result: Connecticut held the Sky to a season low in points. Chicago ranks third in the league by averaging 86 points per game and had averaged 90 points in the previous four meetings against the Sun.

Bumping Chicago off the ball and disrupting the Sky’s uptempo offense, the Sun ensured Vandersloot, who ranks second in the league with 6.5 assists per game, was held to only two. Though Copper finished with 13 points, she was scoreless in the second and third quarters and scored only four points in the fourth quarter.

“When we play defense that way,” Bonner said, “we feel confident about any game. … (We were) scrambling around on defense, flying around. We know they’re a team that moves. We never stayed still, and our communication on defense was huge tonight.”

Though Stevens said she was surprised by Connecticut’s level of physicality and hedging, Sky coach James Wade said the Sky knew it was coming. He knows it will be coming again in Game 2 on Wednesday — and beyond. “I think they were really aggressive in ball screens and they tried to put an early hit on the ball,” he said.

Wade makes a valid point. Despite their usual deft quickness, the Sky are hardly puny as one of the best rebounding and inside-scoring teams in the league. Candace Parker, who nearly single-handedly delivered a victory Sunday with 19 points, 18 rebounds and six blocked shots, is the WNBA’s best defensive rebounder. Stevens has unusual speed and agility for a 6-foot-6 post player, while 6-4 Emma Meesseman can strike an imposing figure down low.

“They’re big, but we’re physical,” Wade countered. Just not so much Sunday, clearly.

The Sky are known for shaking off losses, of course. Last season, the Sun evened the series 1-1 before Chicago rolled over them en route to the WNBA championship. In the first round of this season’s playoffs, New York claimed a Game 1 victory in Chicago, and the Sky answered with a playoff-record 38-point victory in Game 2 before clinching the series on the road. The Sky are at their best when they’re utilizing their versatile roster.

“We responded all year long to tough games,” Sky guard Allie Quigley said. “So I know we’re gonna respond again. We know what kind of game they want to make it, but we just got to make it our kind of game.”

The Sun’s defensive strategy to stymie Chicago’s well-oiled offense was essential for their opening victory. But both teams understand there’s an underlying determining factor. That tone was set when Copper and Williams tangled.

“This is not even really like what can we do tactically; it’s just whoever wants it more,” Stevens said. “Because they have beef with us from last year. … That’s the type of series this is going to be. Who wants it more? Who’s not going to let the ball go?”

Williams said she was determined to hold on to the ball in her tussle with Copper. But she’s more focused on holding something else at the end of the season.

“Hopefully, by the end of it all, we’ll be holding on to that trophy,” Williams said.