On a few occasions during this tournament, I have found myself getting emotional.

I got emotional at the Old Trafford opener, and certainly when England progressed from the quarter-finals and then the semi-finals. I’ve seen images of families, and of young men coming together to achieve record attendances and reactions in the fan zones, which we have never had before. It got me emotional for all the young girls that have been and gone — so many generations that never had that coverage or those role models to inspire them. Now the Lionesses are on the front pages, being talked about by the country, front and centre.

It just wasn’t fair that football was banned for 50 years, that women have had to fight for everything tooth and nail, and still, it is met with criticism and negative comments. The reality is that we have never had an equal opportunity. I’m convinced that if I had played football earlier, or known that there was a possibility to be a professional — as there is now — then I would have gone for it and played just like my grandad did.

As a young girl playing with the boys in primary school in the late 1980s, I realised their potential was so much more than mine. It didn’t matter how good I was — winning sports days, playing county levels, attending Loughborough University — I realised that there was no opportunity for me to make a living from it. But I was watching all the boys around me who weren’t as good, recognising that they probably could.

The fact that young boys can also see the Lionesses as role models now will help to change their view and make them more inclusive. They will likely be more inclined to want to play with girls, whereas this was probably not the case when I was younger.

There is still so much change that needs to happen in the world, and it is great that football is coming into this sphere. I always thought that if you were a woman, the only way you could make a career in sport was in tennis or golf. I took up athletics, but only because I never thought football was an option for me growing up.

THE #WEURO2022 FINAL IS HERE! 🤩 pic.twitter.com/xfQB5APgLG

Ian Wright has spoken out about the need for equal opportunities for young girls in PE. Sixty-three per cent of schools offer girl’s football in PE, so while it may be the case that some girls are playing, and have been for years, let’s not be so narrow-minded as to think that just because a girl in Birmingham is getting that opportunity doesn’t mean that a girl in Glasgow is — the country differs, and we don’t want this to be a postcode lottery because that’s not the case for the boys.

I want everyone to have that same opportunity, and when you’re a young kid dreaming, you can dream that dream and know it’s something that’s possible. We know only those at the very top make it, that’s life, but to know it’s a possibility — that’s the game-changer.

If England go on to win this tournament, that is a real opportunity for all those people in positions of responsibility, who can affect the game going forward, to act and be vocal. I will try to do that as well — I’ll do it whether they win or not! But for certain key players in sport, winning changes the landscape. Suddenly, there is money and there are people wanting to jump on to it. They all have a responsibility to remember the pyramid, to think of the young girls coming through. 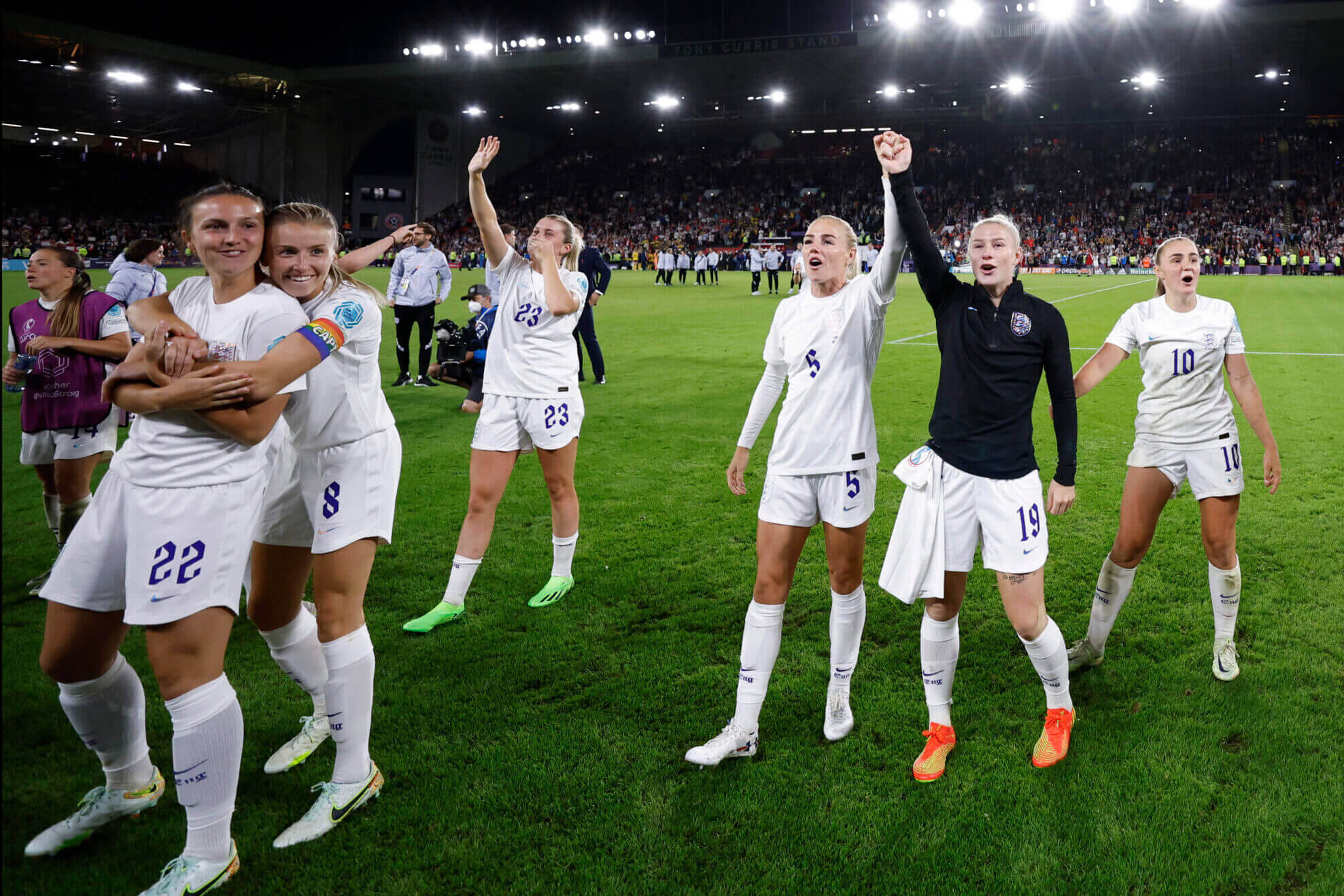 The Lionesses have received so much coverage, but we need to make sure that this trickles down to the Championship and lower levels. Let’s make sure we take over the interest from this tournament into the WSL. Let’s encourage people who have supported these players at this Euros to continue to support them at club level. That’s what I hope for as the legacy: that the game can continue to grow; and not just in the WSL, but down the pyramid as well. We can all support our local teams more.

Yes, this summer has been wonderful, and yes, we’ve made new ground, but let’s not kid ourselves that this is over by any stretch. I hope the landscape changes and there are new frontiers made whereby other sports also get their time in the spotlight. Where women generally have the same opportunities as men. Where they don’t have to juggle jobs and motherhood, and pay subs, and drive hours and hours to go and do something they love if they have talent when men don’t have to do the same. This is much more than football. I think if England win this tournament, the way that women generally in society will be treated when it comes to sport will change forever — this is what we wanted all along.

Where would women’s football be now if it had not been banned for half a century? How would it look now if there was greater parity with the men’s game? This is what makes me emotional on behalf of so many others: those that were more talented than I was, who actually did play for England and never got the recognition they deserved. All those players who were very talented but suffered injuries and couldn’t have them treated in time or afford the surgeries to go private. Who didn’t have access to the best physios and doctors, and missed out on tournaments, when we know that football is a really short lifespan when you’re a player.

Those who have been the pioneers and laid down the foundations for us to get to this point. On a personal note, I want to say thank you to the people who have been instrumental in getting the game where it is — they all know who they are.

There are also those no longer with us, whether that be former players for England or all those who have passed but loved football and made their mark. Lance Hardy, who gave me my first job in football at the BBC, introduced me to Hope Powell and the England team at a bar in London because he knew that I loved women’s football but genuinely didn’t even know there was an England team. As soon as I started following them, I remember when I realised that this was something that I could work in as well. Unfortunately, Lance passed away last year, but he did so much for the women’s game and driving its visibility through coverage. I have thought of him every day of this tournament.

Lynsey Hooper is co-founder and presenter of The Offside Rule podcast. You can listen to it here

‘Stop trying to be TikTok’: how video-centric Instagram sparked a revolt

Kayvon Thibodeaux practice diary: Giants rookie learning ‘there are no plays off’ in NFL