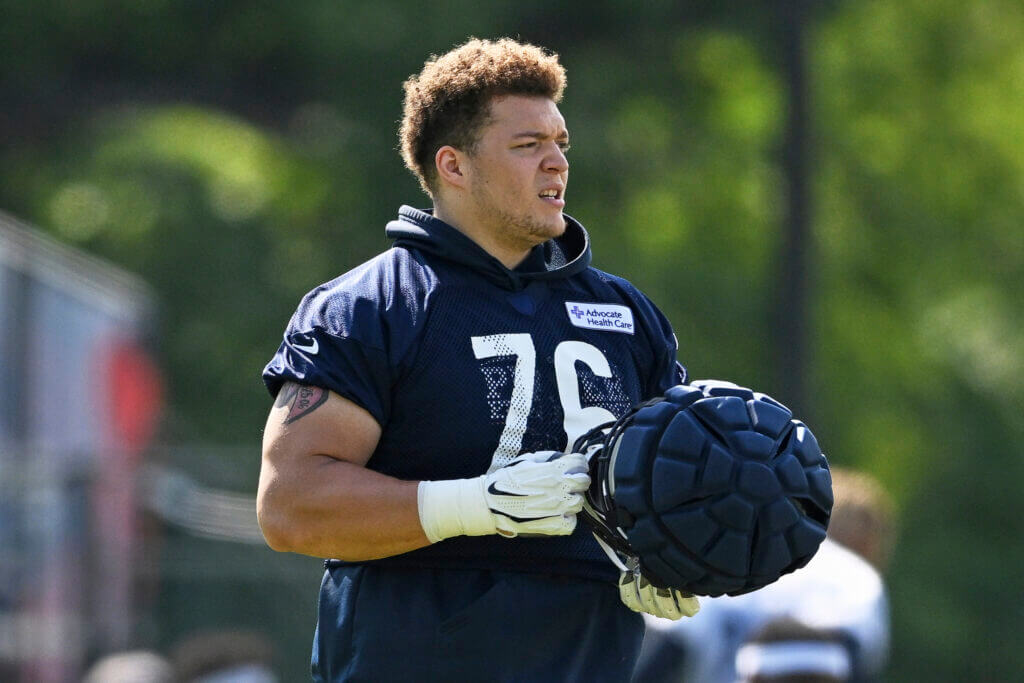 LAKE FOREST, Ill. — It became clear immediately during Teven Jenkins’ news conference Saturday that he wasn’t going to say much about anything or everything.

What injury has kept him out?

“I don’t want to disclose that right now.”

Was it his back?

“I’m not going to disclose that right now.”

What Jenkins would say is that any reports about his “clashing with coaches” aren’t true. If he was going to clear anything up after missing seven consecutive practices — which included an NFL Network report that the Bears had had trade talks about him — that was it.

“That was totally not true, and I just wanted to tell everybody that you don’t have to believe everything that somebody says,” Jenkins said. “It’s just how it is.”

Bears OT Teven Jenkins: “I’ve been in the training room trying to get better health-wise.”

When asked about what specifically has kept him out, Jenkins said he is not going to disclose anything.

As for those trade rumors, Jenkins said that he hasn’t spoken to general manager Ryan Poles. He’s only checked in with his agent, Joel Segal.

What did Segal tell him?

“I don’t want to disclose anything on that,” he said.

On several occasions, Jenkins said he wants to be a Bear, and that he’s loyal to the organization that drafted him — even if it’s a new front office and coaching staff.

“For me myself, I’m a loyal type of guy,” Jenkins said. “The Chicago Bears, they drafted me so I’m going to stay with the Chicago Bears until whenever it is.”

Starting Sunday, Jenkins said that he hopes to see an increase in snaps during team drills. He returned to practice on Saturday but only took part in individual drills.

“I would say that we’re ramping him up,” coach Matt Eberflus said. “Typically the way the model works is that a guy’s coming off of whatever the issue is; he now goes into individual and then we ramp him up; we ramp his reps up. Then it’s up to a full period, then two periods, then three periods, then kind of work from there.”

Jenkins expects to be at 100 percent in the coming days.

“It feels really good and I’m not having any discomfort right now, so it’s really good,” he said. “If I had to give myself a percent, probably around 90 percent and it’s just about working my body back into the feeling of football back again and getting back to that 100 percent of this is football and get ready to go.”

Fishbain: Jenkins’ frustration is evident. He didn’t seem thrilled to be talking to us. He didn’t want to say anything about what kept him out. The Bears — and Jenkins — have created a situation that leads to rampant speculation, but the best he can do now is work his way back to full health and prove it on the field. I’ve wanted to see Jenkins in pads in camp — something we didn’t get to see last summer. But at this juncture, how much can he prove?

Jahns: Jenkins missed seven practices and he didn’t do much on Saturday, either. But he has 15 training camp practices and three preseason games to change his story here if that’s what he really wants. There is an “it’s too late” feel right now. Rookie Braxton Jones appears to be settling in at left tackle, while veteran Riley Reiff was signed and is now rotating on the right side with Larry Borom. It might take an injury to open a door for Jenkins.

Fishbain: He can also “change the story” and make himself more valuable in a trade scenario as we get closer to the regular season. If Jenkins stays healthy and plays well, but isn’t necessarily what the Bears seek up front, it could work for both sides. Jenkins could join a new team that’s a better fit, and the Bears could get a late-round pick in return. It’s rare that trade talks get leaked and then that sentiment just goes away. You want to see a good end result for Jenkins, and maybe that’s being a backup tackle on this roster.

Jahns: Of course, he might not see himself as a backup. His best opportunity to start and play more in the NFL might be elsewhere. And that’s where the trade conversations and speculation will return. As you mentioned, it’ll be in the Bears’ best interests to get something for him. But for now, that appears on hold. His story, though, will be worth watching for some time.

The injuries are adding up at receiver. Eberflus said that Byron Pringle will be out “a little bit longer” because of a quad injury, though the expectation is that he won’t be out when the regular season opens in September.

“I don’t think so,” Eberflus said. “It’s longer than day-to-day, so that’s all I can say, but no real timetable to return. But we’re hopeful that it’s a good situation for us.”

N’Keal Harry also left practice early with an apparent left leg/foot injury on Saturday. Harry required assistance from teammates and trainers to get off the field. He rolled up from behind during a screen.

“I don’t know much; I just saw him come down,” Eberflus said. “I saw the play and I don’t really know much from there. We’re obviously going to do the evaluation and then once I get that, we can get it back to you.”

Rookie Velus Jones Jr. and Dante Pettis didn’t practice. Eberflus didn’t disclose the nature of their injuries but both are considered day-to-day. In the meantime, opportunities increased for other receivers, most notably veteran Tajae Sharpe. He had opened camp on the non-football injury list.

During a hurry-up drill at the end of practice, the offense faced a third-and-10. Justin Fields found Sharpe for the first down and one of the better completions of the day in 11-on-11 reps.

“When you have a guy step up like that, that’s awesome,” Eberflus said. “That’s what it’s all about, right? Guys go down, guys step up and Tajae did a nice job. We’re excited to have him back. He’s back now and he looks good in the drills, and like you said, made a couple nice plays.”

Eberflus did say that Gordon and Jones are considered day-to-day.

Left tackle Braxton Jones spent some time talking to a trainer at practice and seemed to be battling an injury. Eberflus said they aren’t worried, though, and if anything the rookie will be day-to-day.

Can Jacinda Ardern turn her popularity abroad into domestic success before it’s too late? | Henry Cooke