Walt Disney Animation Chief Creative Officer Jennifer Lee regularly returned to the centennial of the Walt Disney Company during the studio’s massive panel devoted to the features they have coming up over the next several years. Innovation was the name of the game. With three years passing since the last time audiences were ensconced in Hall D23 both Walt Disney Animation and Pixar touted a desire to change with the times. Pixar’s Chief Creative Officer Pete Docter said, if anything, the pandemic forced the studio to ask “what’s our purpose” and based on the footage for both studios, there’s a desire to make that purpose great storytelling and A-list actors voicing iconic characters.

Unlike 2019, which had “Frozen 2” as the centerpiece of the event, complete with a musical performance and a clip, this year touched on several different shows with little footage. The big surprise was an appearance by Amy Poehler, who announced alongside Docter that a sequel to 2015’s “Inside Out” had been greenlit. Kelsey Mann, the director behind “The Good Dinosaur” will take the helm, with Meg LeFauve returning to write the script. The original film followed a pre-teen girl named Riley and the emotions that live inside her head.

The feature is early in production but the feature will follow a now teenage Riley and the old, and new, emotions that rule her world. Poehler reprises her role as Joy, the literal embodiment of happiness inside Riley’s head. Phyllis Smith played Sadness, with Bill Hader, Mindy Kaling, and Lewis Black playing Fear, Disgust, and Anger, respectively. It’s unknown if all of them will be returning. “Inside Out 2” will premiere in summer 2024.

This continuation of the 2016 feature of the same name has felt like it’s been in development for awhile, but all six episodes are finally coming to Disney+ on November 9. This series feels similar to “Cars on the Road” and “Forky Asks a Question,” telling short stories about the residents of the animal-led Zootopia. A brief sizzle was shown, featuring snippets of what Zootopians are watching, from “The Godfather of the Bride,” with the rodent voiced by Martin Scorsese looking to tell a new story. We also got a hilarious recreation of our current reality landscape with “The Real Housewives of Rodentia.” It’s doubtful these shorts will set the world on fire but they should do a great job of expanding the world of “Zootopia” outward.

Pixar’s next animated adventure is actually inspired by the adventure serials of old. “Strange World” comes from “Big Hero 6” director Don Hall and “Raya and the Last Dragon” screenwriter Qui Nguyen and follows Searcher Clade (voiced by Jake Gyllenhaal). Searcher hopes to leave a better world for his son, Ethan (Jaboukie Young-White). But when Ethan and Searcher find themselves lost in an eponymous strange world, the pair must team up with Searcher’s presumed missing father, Jaeger (voiced by Dennis Quaid).

An extended clip was shown during the event and the vibe of the movie feels like a blending of Pixar’s 2020 feature “Onward” as well as the recent “Lightyear.” Jaeger’s introduction lovingly feels like an ’80s action introduction, complete with slow motion. The strange world of the title is filled with all manner of faceless creatures, hearkening back to the likes of Jules Verne’s “Journey to the Center of the Earth.” This will be an interesting one, especially considering how much it feels like “Onward.” That movie suffered from coming out right at the start of the pandemic. This might be a second chance for those who end up enjoying this to seek out that previous feature. “Strange World” premieres in theaters on November 22.

Coming from Pixar next June, “Elemental” is a romantic animated feature that takes place in Element City. It follows Ember (voiced by Leah Lewis), a fiery young female fire element, and what happens when she meets a water element named Wade (voiced by Mamoudou Athie). “Elemental” is directed by Peter Sohn, who lovingly told the audience that the movie was inspired by his parents who immigrated from Korea to the US in the 1970s. The extended scene that was presented shows Wade and Ember’s early moments together as they walk through Element City. The colors just pop, from Ember’s red and orange to Wade’s blue and green. But the couple’s challenge is easily presented when Ember stands in front of a waterfall; the pair literally can’t touch due to their elemental makeup. “We’re all just made up of the people we love,” Ember says, and it’s clear “Elemental” looks to be a charming love story. Pete Doctor emphasize that “Elemental” will be a theatrical film, released on June 16, 2023.

“Coco” co-director Adrian Molina and associate producer Mary Alice Drumm introduced audiences’ to the intergalactic world of “Elio.” Elio (voiced by Yonas Kibreab) is an “ambitious dreamer” who doesn’t fit in. But things change when he makes first contact with aliens who beam him up into space and name him ambassador of the universe. We didn’t get any footage outside of some character drawings and the reveal that “Superstore” actress America Ferrera will play Elio’s mom. The concept certainly sounds fun, if slight at the moment, though it’s wonderful to see Molina bring us a follow-up to the flawless “Coco.” “Elio” will be released in spring 2024.

“Win or Lose” is Pixar’s first original longform animated television series coming to Disney+ next year. The series comes from Carrie Hobson and Michael Yates, both longtime employees of Pixar, and tells the story of a week in the life of a middle school softball team called the Pickles as they prepare for their championship game. Each of the episodes will tell the same story from the perspective of different characters, with different animation styles utilized depending on the character POV. A brief sizzle was presented, giving us glimpses of Pixar’s standard animation alongside what looked like a comic book or anime rendering to tell one story. An extended clip was also shown, introduced by Will Forte who will voice the team’s coach. This is the moment “Win or Lose” really showed how charming it is. The team’s umpire attempts to ask out his barista, before nerves get the better of him and he puts on a literal suit of emotional armor in a sequence of cringe comedy that only Pixar could pull off. It’s frank, awkward, and utterly adorable.

“Iwájú” is Disney’s first collaboration with an outside animation studio, the African studio Kugali Media. The Disney+ series is described as a loving tribute to Lagos, Nigeria where the founders of Kugali are from. The nation isn’t just separated by water, but by socioeconomic issues and the series will bring that together with the story of Tola, a wealthy heiress, and her impoverished best friend Kole. Problems arise when the young kids are torn between two very different men, one being Tola’s father and the other a local underworld boss. The snippet we got to see was slick and vibrant, with an emphasis on the futuristic technology of the world, especially Tola’s robot lizard sidekick named Otin (who you might think looks a lot like Bruni from “Frozen 2”). There’s no release date for “Iwájú” but this feels unlike anything Disney+ has done before. 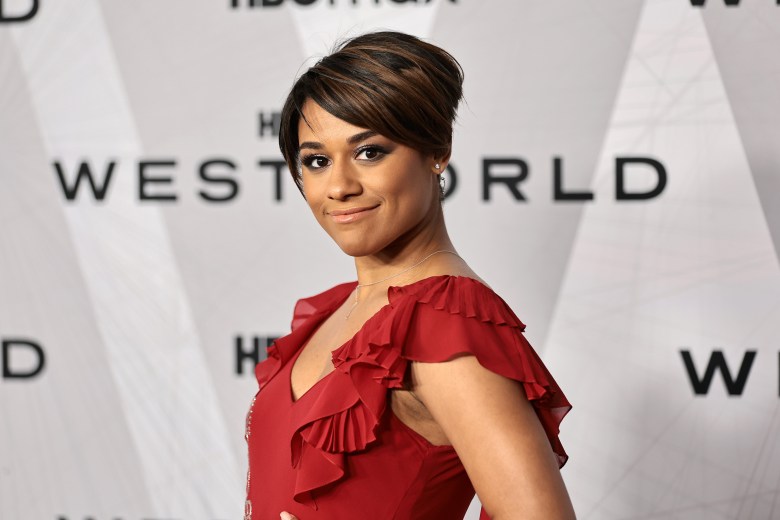 Walt Disney Animation had a rather muted appearance, saving their three projects to the end of the panel. Only two features were announced, the first being “Strange World” and the second was described by Jennifer Lee as the movie to honor the legacy of Walt Disney Animation and its centennial. The end result is the movie “Wish,” a movie so heavily inspired by Walt Disney animated movies that co-director Chris Buck said the Easter eggs would be prominent. Lee described the movie as the origin story of the wishing star that numerous Disney characters have wished upon.

The movie takes place in the fairy tale world of the Kingdom of Rosas, a land that existed before all the Disney movies. A few character tests were shown, emphasizing a watercolor landscape and a weird 2D quality that actually felt revolutionary. If Disney found a way to give a 2D vibe to 3D characters…best of both worlds! “Wish” will follow Asha (Arian DeBose) and what happens when she makes a life-changing wish and is gifted with a literal star as a sidekick. Julia Michaels will craft the songs and audiences were treated to a full performance from DeBose singing the film’s wishing song, “More For Us.” It was a serious showstopper that blended old school “I want” songs with a modern, pop sensibility.  There’s no current release date for “Wish” but I want to listen to “More For Us” immediately.