So far, Ange Postecoglou has made no drastic tactical changes for his second season in charge at Celtic.

But there have been tweaks.

The most obvious is how far up the pitch Joe Hart now plays when Celtic have possession. The grab below, with Hart playing as virtually a third centre-back, is now the norm. 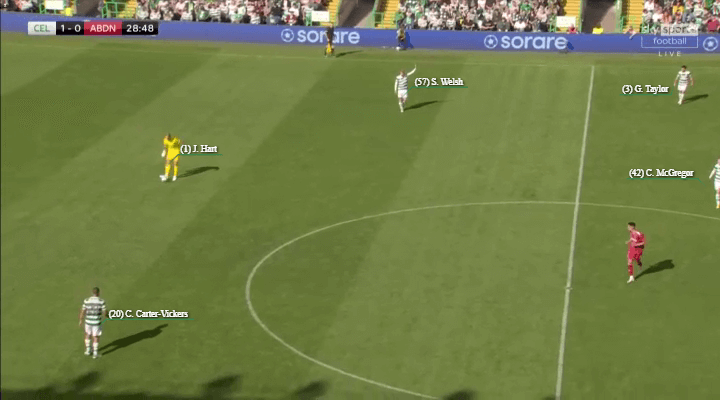 Without recruiting a Kristoffer Ajer-style, ball-playing centre-back, this tactic appears to be an attempt by Postecoglou to address one of his team’s most glaring issues from last season: playing out from the back.

The below grab from the Aberdeen game shows Stephen Welsh returning the ball to Hart. As Pyzdrowski says, they start the passage much further up the pitch than is traditional. Welsh and Cameron Carter-Vickers split wide to increase Hart’s options — he can go short to them or play the ball up the middle. 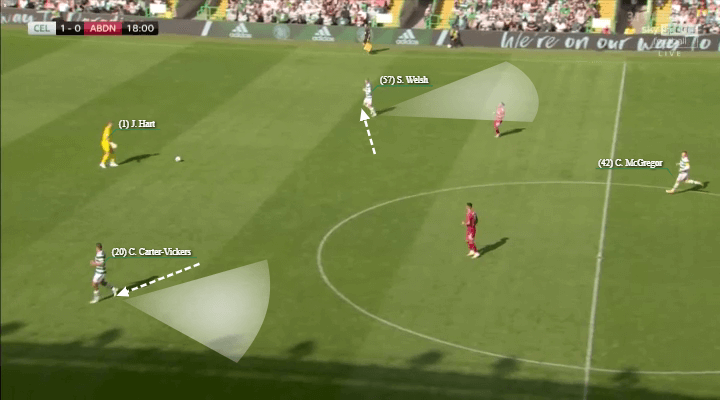 There was a similar situation during the 2-2 draw with Legia Warsaw in pre-season. Hart receives the ball and Welsh and Carter-Vickers split wide. Legia’s forwards stay central, reluctant to push too wide because Celtic have the spare man. That gives Welsh more space and he picks out Alexandro Bernabei with a nice vertical pass. 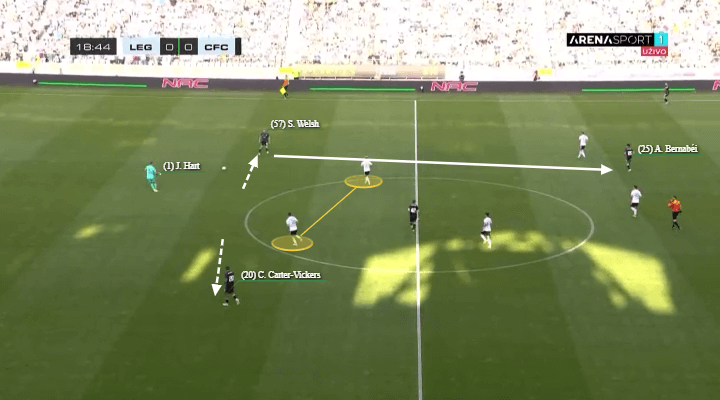 It can be used to trap opposition forwards as well. If they decide to press the centre-backs, who are now operating out wide, it opens space in the central area. Here Legia pressure Carter-Vickers and Welsh, giving Hart an easy pass to Callum McGregor in midfield. 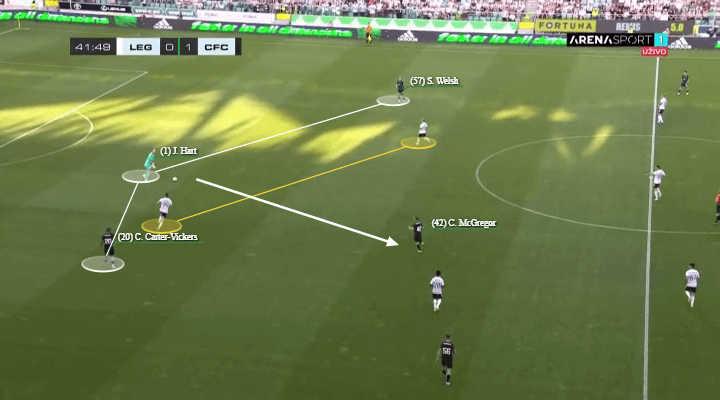 “With the ‘keeper now picking up that role, if they can beat that first pressure then the No 6 can receive and turn further up the pitch,” says Pyzdrowski.

“Instead of turning right outside his box, he’s now turning at the halfway line. This obviously allows attackers to push forward, pin the defensive team back, and create from a more advantageous position.”

Another example of how it changes Celtic’s play was illustrated in the dying stages of the Aberdeen game. Anthony Ralston plays the ball back to Hart. Aberdeen’s Luis Lopes then sprints towards Hart. Welsh, who would normally be the recipient of Ralston’s pass if Hart were not so advanced, moves into space to receive the ball. 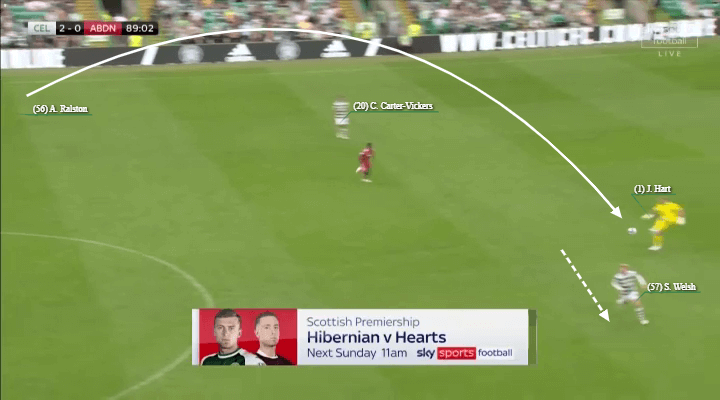 Hart takes a touch before making a weighted pass for Welsh to run onto before Lopes arrives, allowing Celtic to move up the pitch faster. 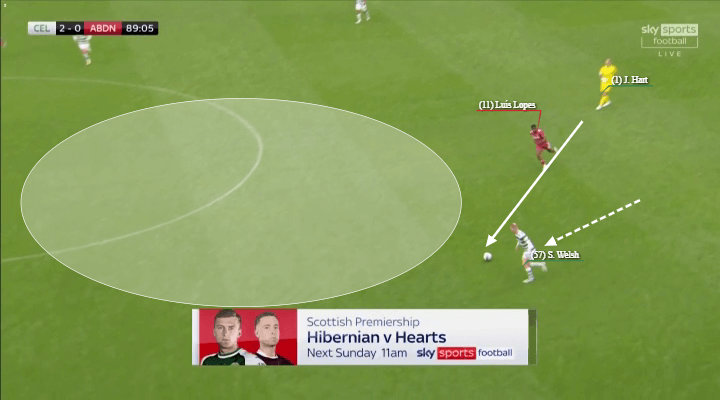 Last season, Welsh would have received Ralston’s pass in Hart’s position and then probably would have passed it back to the goalkeeper in the box, or waited for another safe option, or cleared it forwards.

“Playing so high condenses the pitch for the goalkeeper,” says Pyzdrowski. “So if he has to go a bit longer, rather than going to the opposite half from his own box, he could then target the opposition box.

“That gives a real advantage to the attacking team and makes it tough for the opposition centre-backs and goalkeeper. Ideally, this will make defending easier for Celtic too because it helps keep the opposition penned in and under pressure.”

There are downsides, of course. The first is that carelessness in possession might lead to chances. If the opposition react quickly to a loose pass they could exploit Hart’s positioning by lobbing him. That almost happened in Celtic’s pre-season 2-2 draw with Blackburn Rovers but the chance was spurned by Tyrhys Dolan. 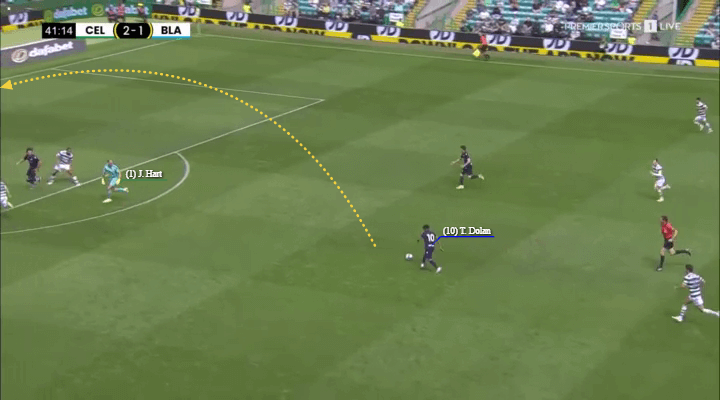 There was a similar incident in the 4-2 pre-season win over Czech side Banik Ostrava. Within the opening 10 minutes, they tried to lob Hart after a slack Filipe Jota pass gifted them possession.

But Postecoglou knows the risk, having played similarly at Yokohama F Marinos, where his goalkeepers were lobbed once or twice a season.

It is likely that, at some point across a 50-plus-game season, Celtic will lose the ball while playing out from the back, so Hart could concede an embarrassing goal or two. It is a psychological challenge Pyzdrowski believes the whole team and staff need to consider.

“As a goalkeeper, you have to accept bad things will happen, regardless of how you and your team might be playing,” Pyzdrowski says. “When you’re 30-40 yards from your own goal, then you’re super exposed. If there’s any kind of turnover — whether from you, your centre-back, or trying to play into midfield — your goal is wide open.

“What’s important is that you’re willing to take that risk. If you’re getting caught out, then you don’t tank the ‘keeper for it, because everyone has to accept mistakes will happen. If you feel like the coach and team-mates are questioning your every move, your play suffers. The team need to believe that Hart can play that role.”

Perhaps the other question is how it will work against a high-pressing team. Celtic will only have time to take one or two touches in that situation, with potentially only narrow angles through which to pass.

“If the players are confident on the ball, then it doesn’t matter if they’re being pressed as they’ll still have the numerical advantage,” Pyzdrowski says. “If the defending teams put two or maybe three guys up to press, then it helps to have three guys to play out directly and then the No 6 to offer himself too. Then if you get through that press you have superior numbers going the other way.”

Ultimately, it hinges on whether Carter-Vickers, Welsh, Carl Starfelt, Moritz Jenz and, most importantly, Hart can handle it, particularly if errors are made.

“His experience is going to play a big role,” Pyzdrowski says of Hart. “Obviously it would be different if he was 25, 26, 27, when he didn’t have so many big games behind him and he wasn’t as secure in himself as he is today, but that experience allows him to play freer.

“The big thing for him the last few years since leaving Manchester City was he didn’t have a team who believed in him before Celtic. At Celtic now his spot is secure, and that’s what allows him to learn the system and develop.”

‘Don’t take it out on our staff!’: How did Britain become so angry? | Society