A quickening of the feet. The different coloured shirt venturing outside of where they should be, of where they belong. The gloves, seemingly distorted in size once they step outside their humble white-painted cage, flap around like foam fingers in the wind.

But you will see a lot more of it — there is a new style in town, one that tells you everything you need to know about Southampton in possession… let The Athletic christen it “the goalkeeper quickstep”.

Since the arrival of goalkeeper coach Andrew Sparkes two years ago, Southampton have started to develop their possession game from the back, realising those in goal have to do a lot more than just boot the ball long and stop it from going in the net.

Fraser Forster, already in his thirties, was a particularly curious case. Even with his 6ft 6in standing (201cm) and a gait that lumbered, he was often lamented for his size-12 feet being glued to the goal–line. Alex McCarthy, now 32 and initially seen as Forster’s proxy, was similarly tentative and possessed a style cut from keeping convention.

The 2020–21 lockdown season saw the first Sparkes-led changes, with the pair encouraged to sweep and take the all (rather than nothing) approach to any ball that went over the side’s invariably high, sometimes kamikaze, backline. Sparkes wanted his keepers to be tactically flexible, recognising when it was the correct time to play out from the back and when to play long. Teething issues spilled over at regular points but no fans were in the stadium to provide any audible dissuasion.

As shown across Southampton’s passing networks since Ralph Hasenhuttl’s appointment, the keeper has been discernibly more involved in possession over the past two seasons, specifically forming connections with the two centre-backs. 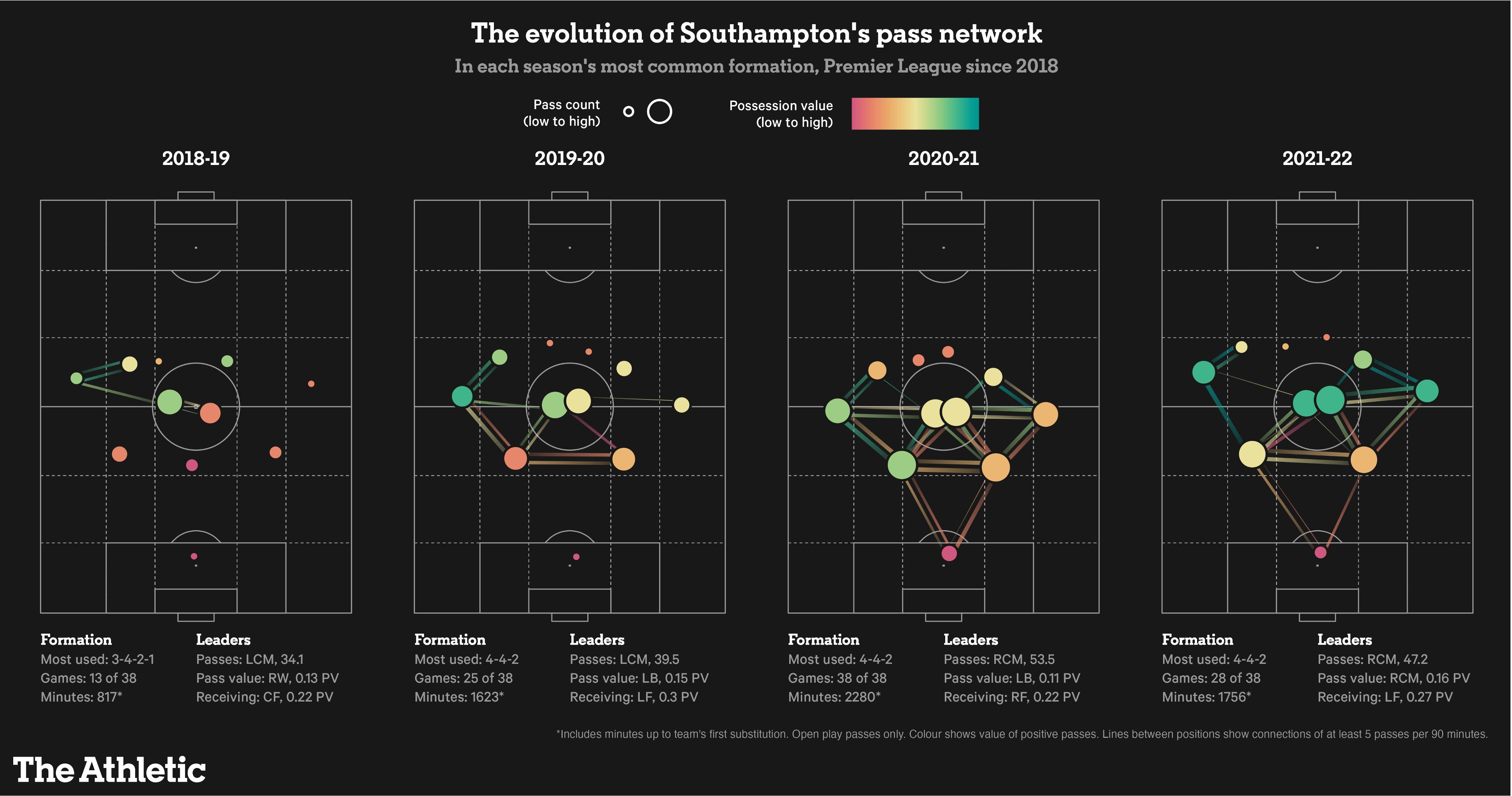 But football has become braver once more. This season, with Forster departing and Gavin Bazunu, a newer model, in situ, Sparkes and Southampton look set to take it up a notch. The signing of the Irishman, who was likened to a third centre-back by those at Portsmouth due to his positioning, has only roused the bravery.
He was later made to dial it back while on loan from Manchester City on the south coast, but the evidence on show at his new club suggests he is getting ramped back up. The 20-year-old is considered to have a higher ceiling when it comes to performing the modern-day requirements of a keeper.

If Southampton’s coaching staff anticipate the side will have “comfortable possession” in matches, Bazunu or McCarthy are not only tasked with coming out of their box to sweep or boot it in row Z (or row GG in St Mary’s case), they have to stand outside it for large periods — in line with the defenders — while the team have the ball.

This is of course tapered to some extent, depending on the opposition’s press. For instance, if Southampton’s backline has time on the ball, the keeper will stand to one side of the goal, creating a passing angle. Alternatively, if the team are under pressure, they will recognise the need to stand centrally and act as the anchor between two centre-backs.

Sparkes has, in some ways, repurposed the keeping remit at the club. “The keeper quickstep” — a repeated movement where either McCarthy or Bazunu recognise they need to, hurriedly, step outside of their box and alongside their deepest centre-back — is another wrinkle of the side adding further variety to their play through the thirds.

Here, in the friendly against Monaco, McCarthy realises he needs to move alongside Lyanco. He quickly moves forwards and out of his box, while Jack Stephens (No 5) back peddles to the side of the pitch and very briefly moonlights at left-back. This forms a back four in possession and turns Hasenhuttl’s 3-5-2 shape into something more familiar. 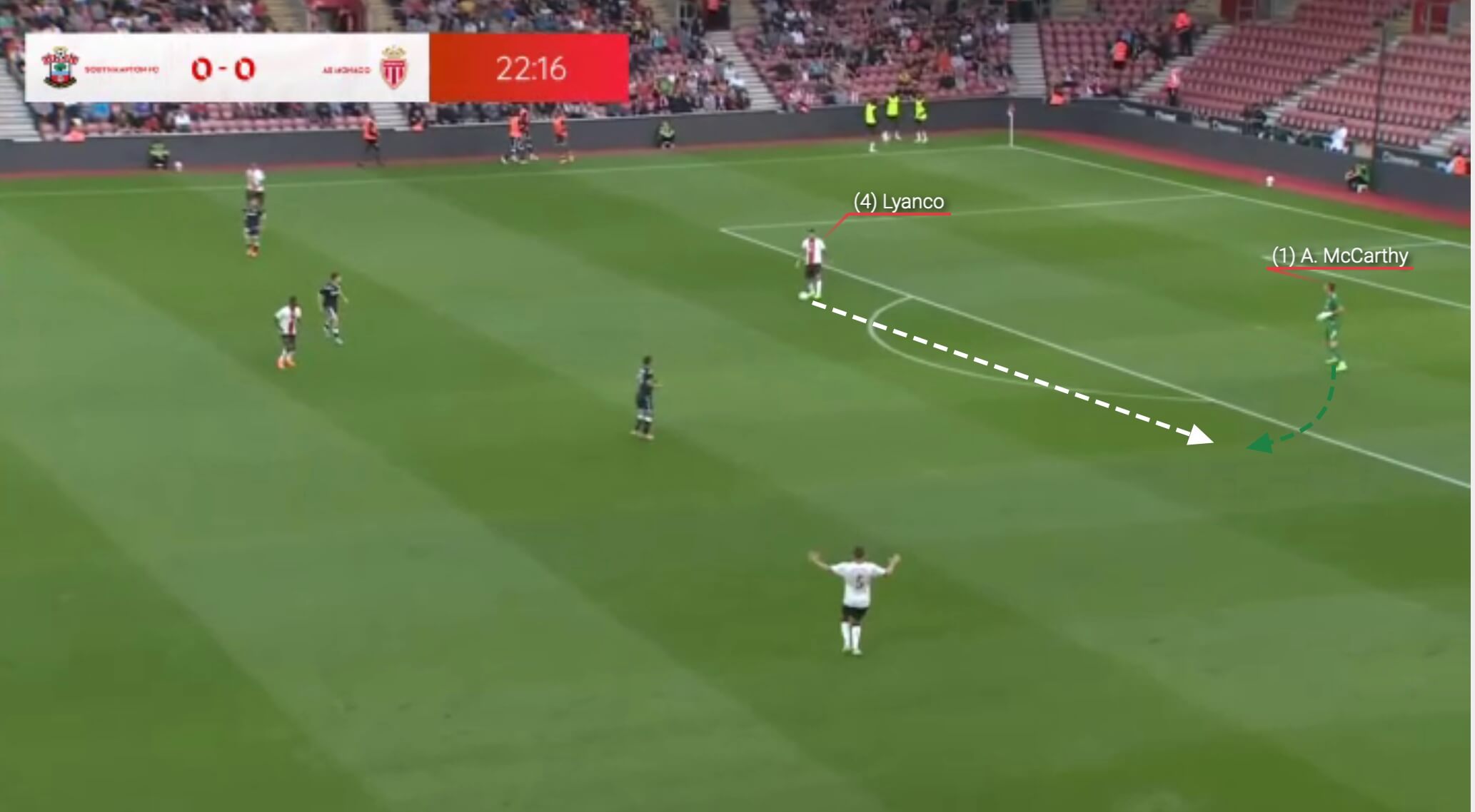 Even when an opposition team are in a mid-block and their trigger to press is when the ball reaches midfield, McCarthy or Bazunu are outside the box. Southampton want to build from the back in the newly-crafted 3-5-2 and play through the thirds. This enables the wing-backs to push higher and the two No 8s to come inside the pitch, opening up more passing lanes centrally.

The image taken from the same game against Monaco shows McCarthy well outside of the box and to the left of his goal, despite early attempts to press from the French side. 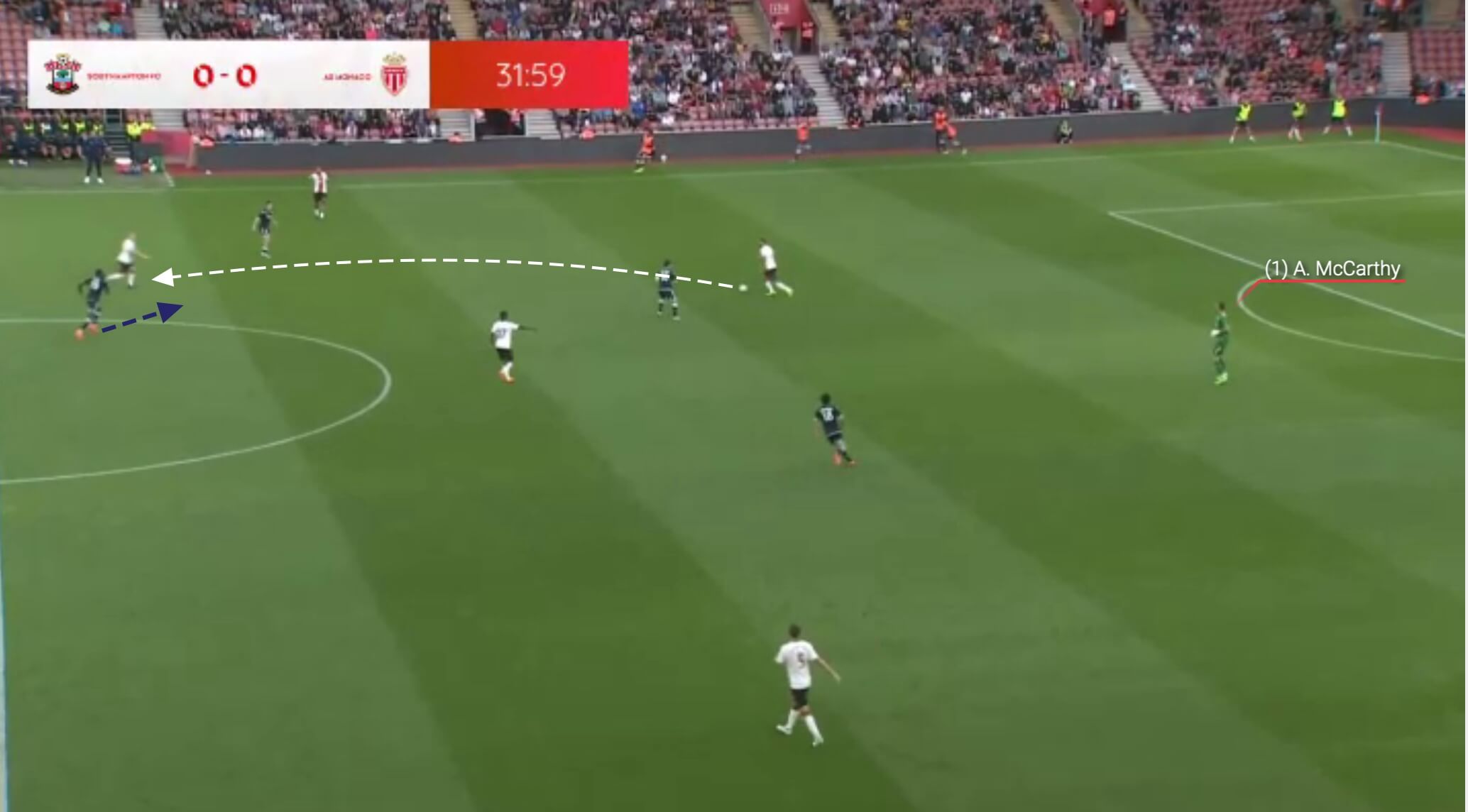 That day, McCarthy completed 45 short passes at a 100 per cent success rate. He has never, according to Opta, made more during a game for Southampton. While his involvement in play has incrementally grown during his six years at the club, the adjustments have never been as acute as they are now. To underline just how striking the change has been, his previous highest total came at Crystal Palace in September 2020, where he completed 27 short passes.

“It is something that can help you release the pressure,” Hasenhuttl told The Athletic in pre-season. “It also helps the centre-backs a little bit for finding the right moments to attack. It is something we have tried.”

With this new strategy, the centre-backs become quasi-full-backs, pushing out to both sides. In theory, this creates overloads in wide areas while the keeper provides a constant sideways passing angle if there are no opportunities to break the lines. Interestingly, Bazunu has a longer kick than McCarthy, which influences positioning; the 32–year–old tends to be more advanced in possession to compensate.

In the example below, Stephens plays the ball back to McCarthy. Lyanco, meanwhile, drops off to stand in line with his keeper, with Yan Valery jockeying into the right-back position. 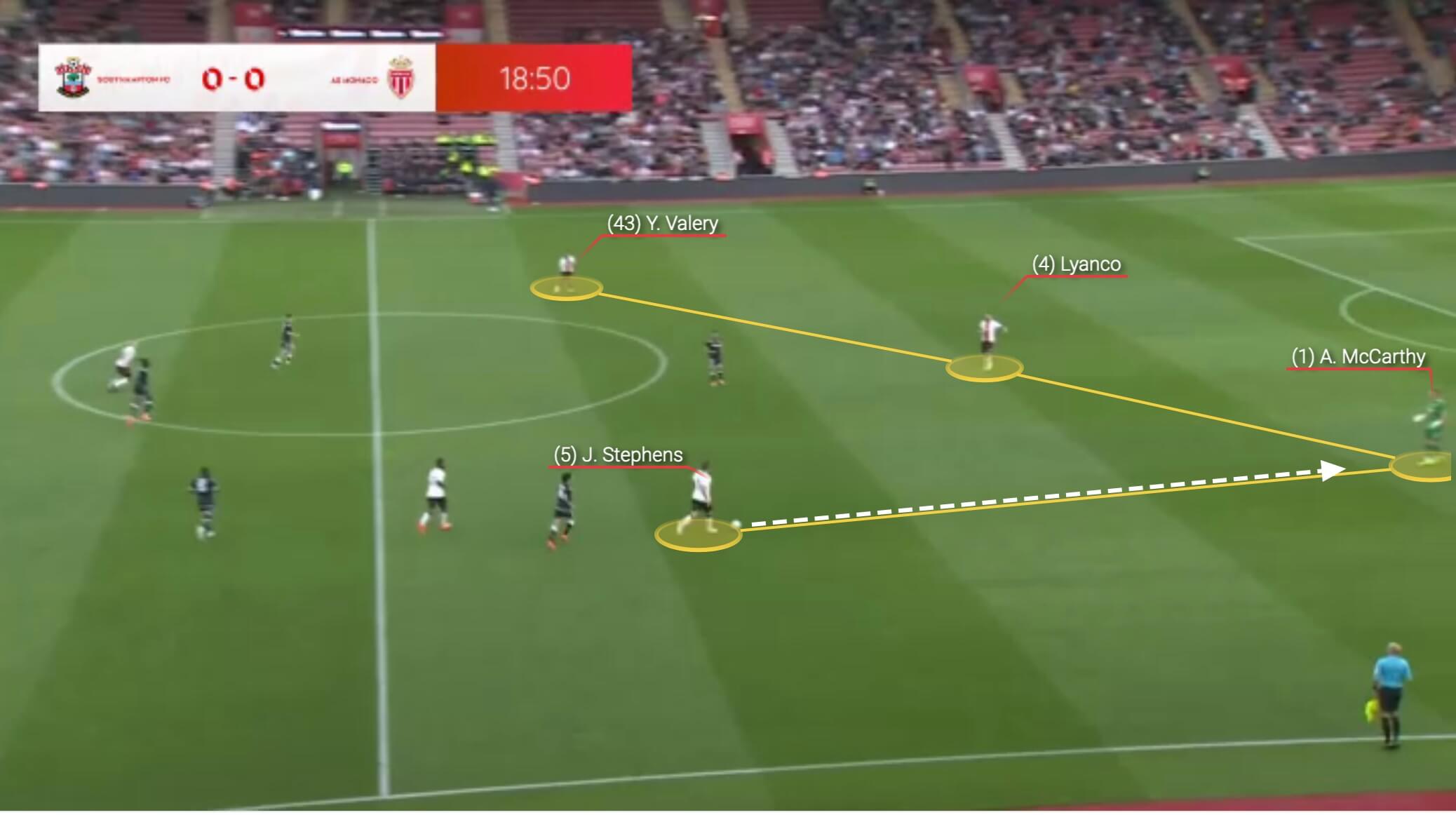 Lyanco is now the deepest player and within the space of four seconds, Southampton have formed a back four in possession. 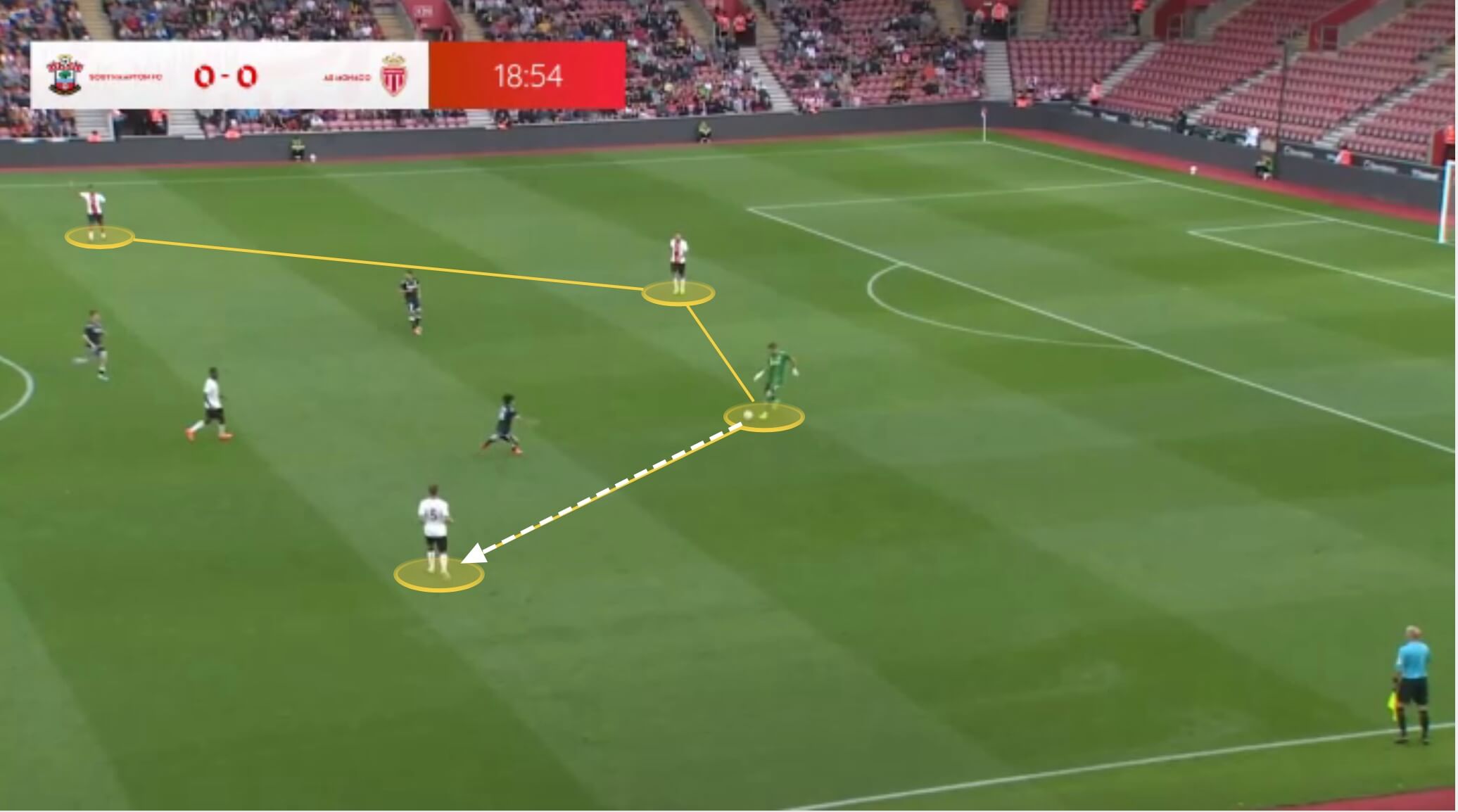 At Portsmouth, Bazunu would be in positions to sweep any long balls over the halfway line and, as a consequence, tend to find himself in areas where he would transition into a pseudo-centre-back. 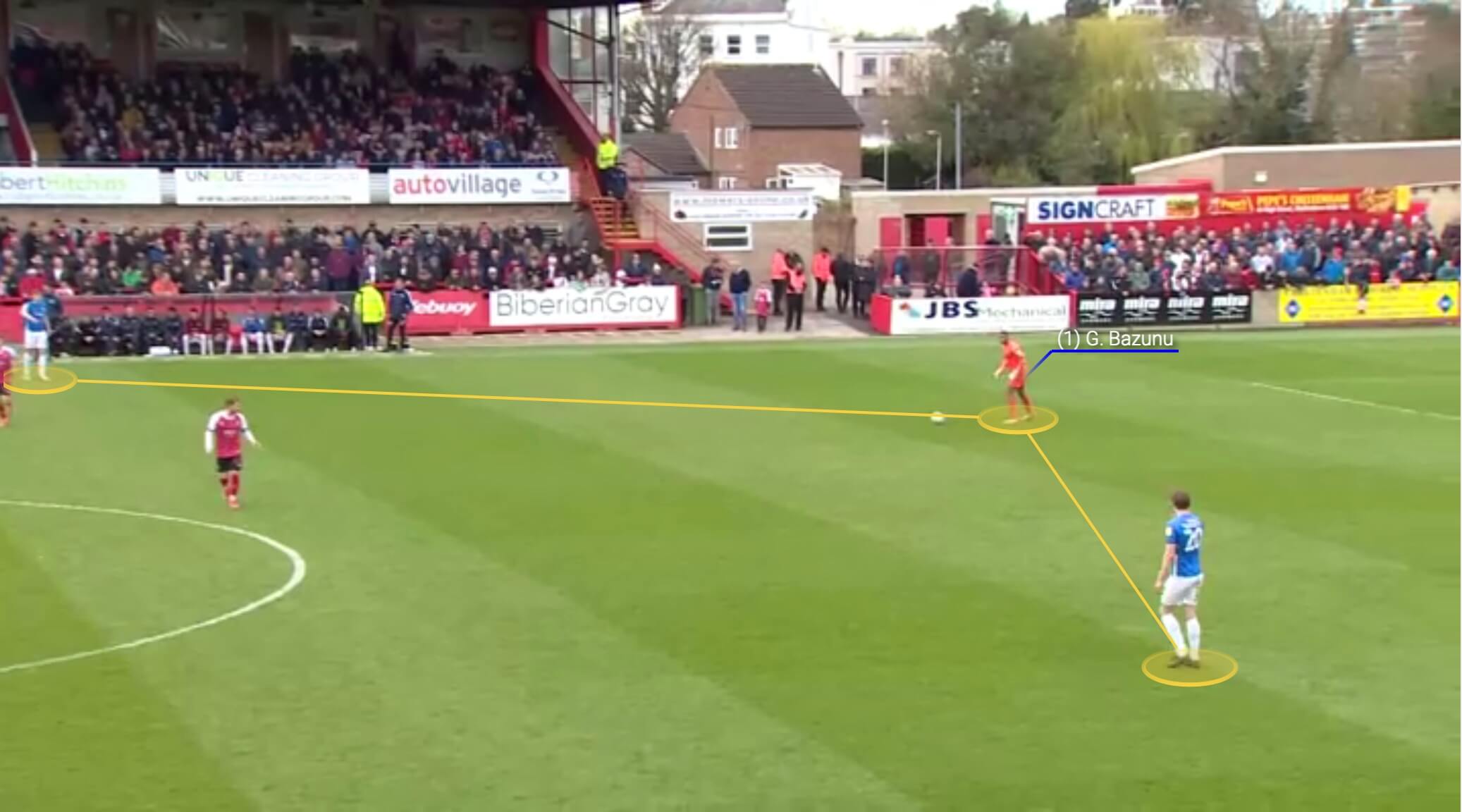 This has carried over to his time on the red side of the south coast, immediately demonstrated on his debut against RB Leipzig. On that occasion, it was Mohammed Salisu tasked with dropping into the full-back position and Armel Bella-Kotchap the passing option laterally. 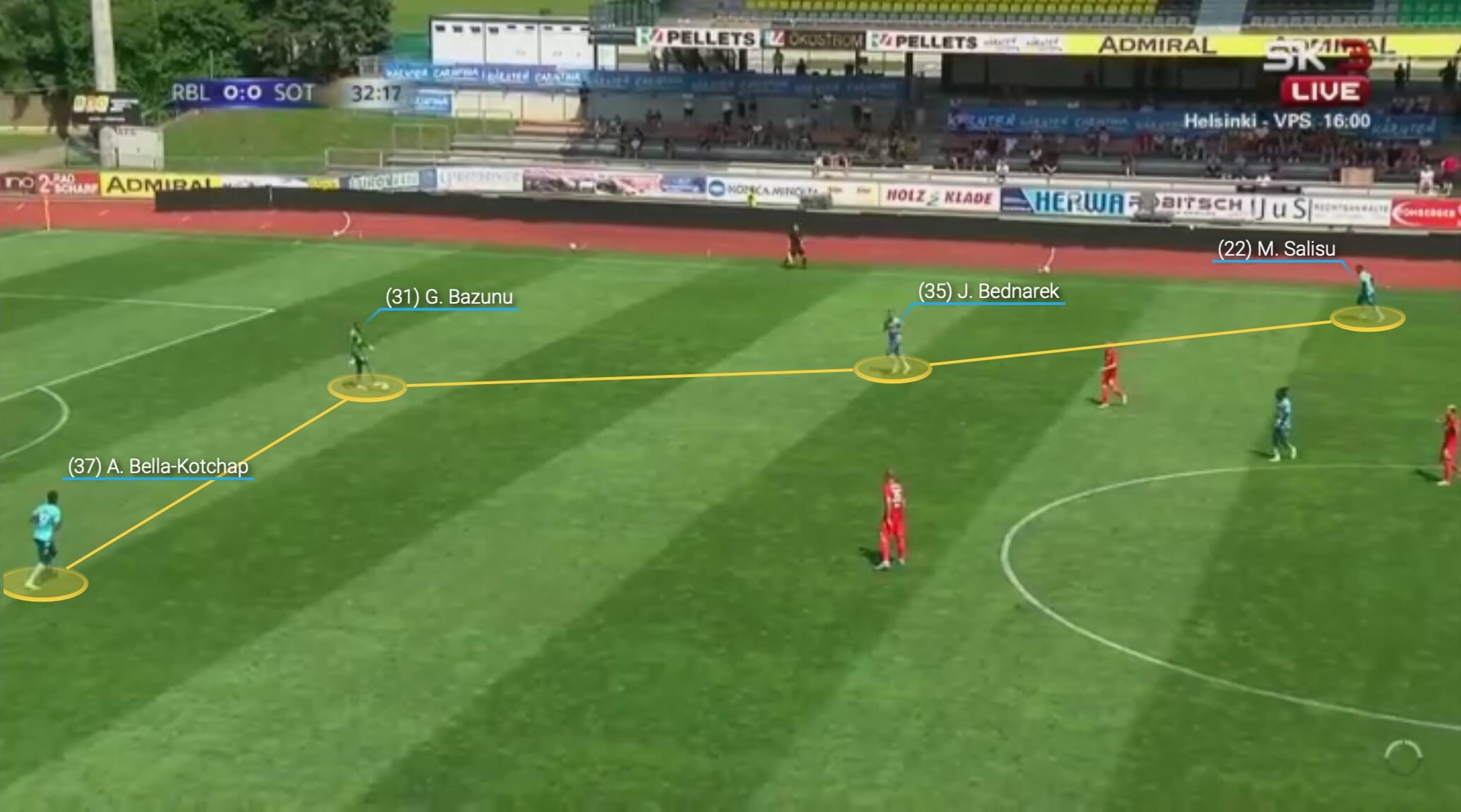 In the opening-day defeat against Tottenham Hotspur, Bazunu was confirmed as Southampton’s No 1, with the new ploy given its first showing in a competitive fixture. While Spurs pressed with far greater intensity than Hasenhuttl’s side had been accustomed to in pre-season, Bazunu remained a key cog in possession. When the situation allowed, he again became another centre-back, using his superior kicking ability to go long and release pressure. 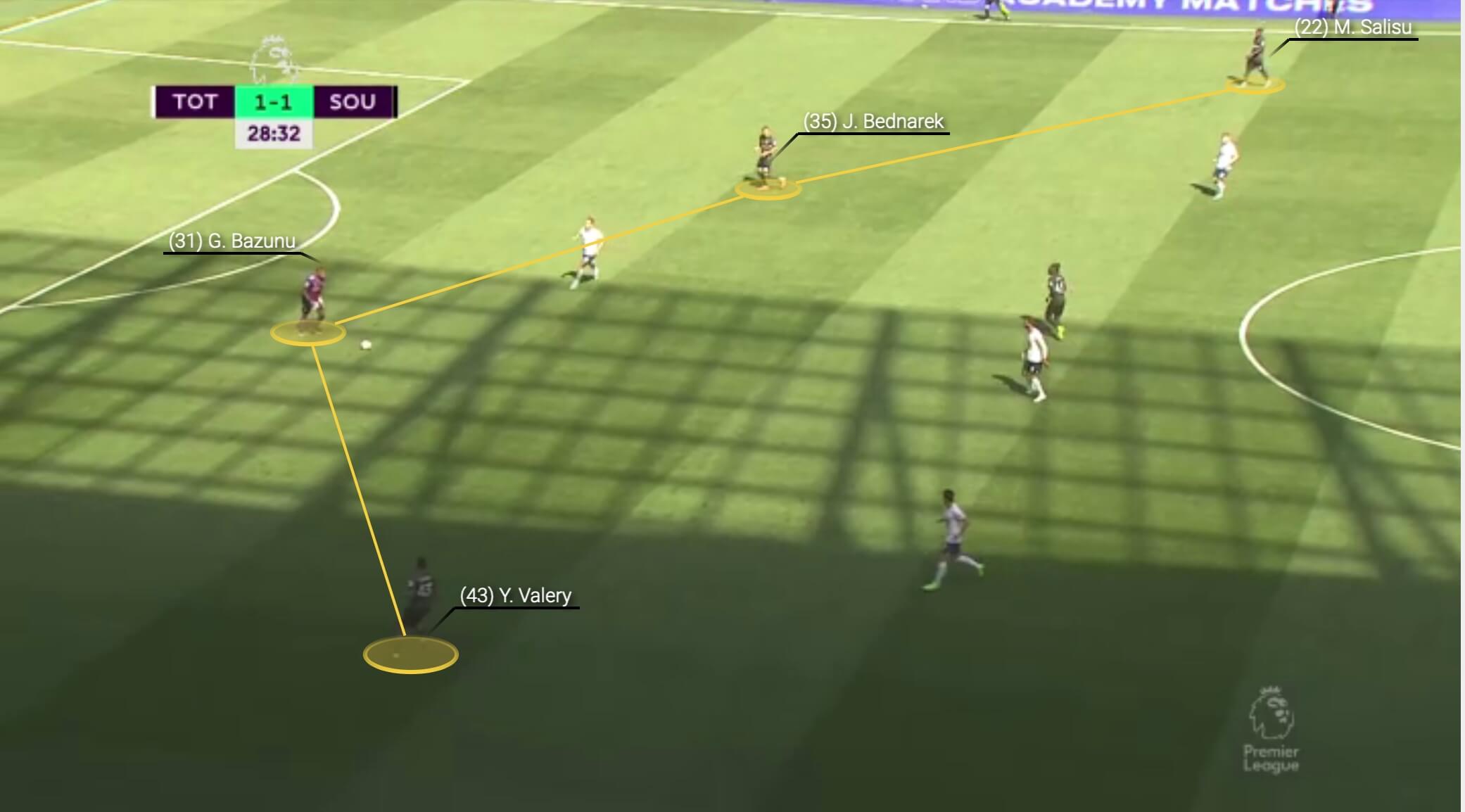 Southampton’s pool of centre-backs perhaps lack the ball-progression qualities to pass through a press or dictate the style of play akin to what Jannik Vestergaard would do, albeit fleetingly. However, Hasenhuttl’s slight modification to his keeper’s positioning in possession could be useful.

There will be risks, of course. But the quickstep will also supply a perennial passing option for outfield players. Southampton believe they will strike the right balance.