IOWA CITY, Iowa — Based on the swinging pendulum that was the 2021 season, the 2022 version of Iowa football could go in one of two directions. The first is to build off a borderline miraculous 10-win campaign considering how badly the offense struggled. The second is for the close victories in November to turn into painful losses this fall. I could see either scenario playing out as clearly as a Nostradamus quatrain.

The good news is there’s enough intrigue for you to read this story. The good news (no bad news) is it’s worthless enough that it doesn’t have any bearing come Sept. 3. That’s the beauty of college football.

So here are my projections and what I think about the unranked Hawkeyes entering their season opener. Should they end up 8-5 with Kirk Ferentz taking a mayo bath in Charlotte, N.C., let’s hope this post will disintegrate under a nice ham sandwich.

Breakdown: I can think of 50 Group of 5 opponents that make more sense for Iowa’s season opener than FCS powerhouse South Dakota State. Six Jackrabbits made the preseason FCS All-America team, including linebacker Adam Bock, who hails from 10 miles north of Iowa City. South Dakota State won 11 games and advanced to the FCS semifinals last year. Granted, the Jackrabbits must replace quarterback Chris Oladokun and running back Pierre Strong, both NFL draft picks, but this is a program built on the same tenets as Iowa. It’s going to be a line-of-scrimmage game, and that’s where Iowa should pull out the win. 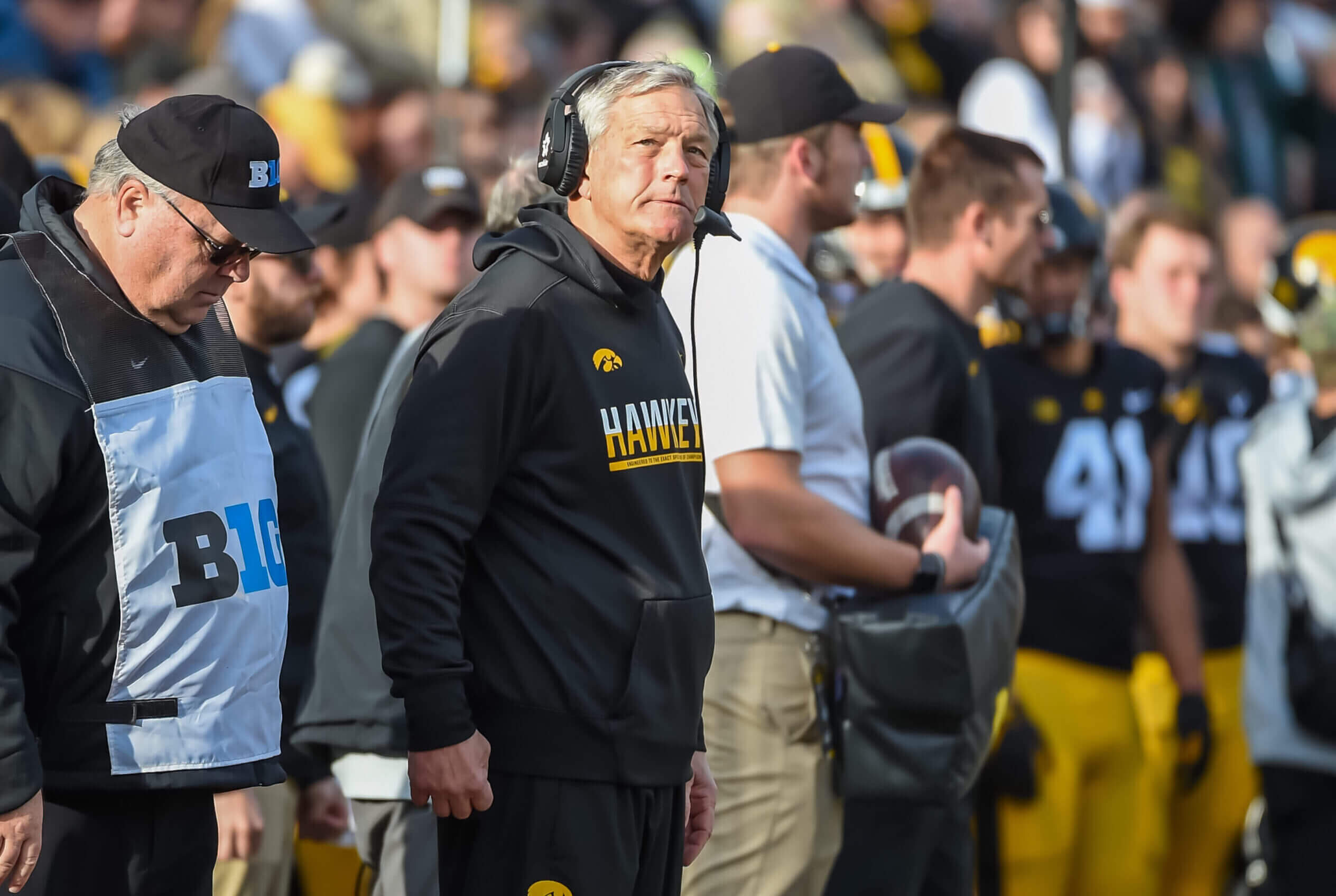 Breakdown: This is the first meeting at Kinnick Stadium since 2018. It’s incredible that Iowa hasn’t had a turnover in the past five meetings, and a 9-0 turnover margin has tipped the balance in many of those games. Last year, both teams were ranked in the top 10 when the Hawkeyes stunned the Cyclones 27-17 at Jack Trice Stadium. Iowa’s 4-0 advantage in turnover margin, including a defensive touchdown, shifted the game in Iowa’s favor. At some point, the turnovers will swing the other way. I expect a defensive fistfight that lasts more than four quarters.

Breakdown: This matchup would have had more cachet last year with Nevada QB Carson Strong and coach Jay Norvell, a first-team All-Big Ten safety at Iowa during the 1985 Rose Bowl season. Instead, it looks like an uneven competition. The Wolf Pack struggled against the run last year and gave up 45 sacks. That’s not a good recipe for beating Iowa, especially in the first nighttime kickoff at Kinnick since 2019.

Breakdown: Rutgers had major issues on offense last year, ranking in the 120s in several major categories, including points per game (19.7), passing touchdowns (nine), third-down percentage (31.6), total offense (311.2 yards) and yards per play (5.7). Its defense, however, was middle of the pack in most categories and very good against the pass (56 percent completions) and in third-down percentage (33.9) and penalties (40.6 yards per game). I would expect a grueling battle in which two of the nation’s top punters showcase their talents to a few scouts and mostly Iowa fans watching on television.

Breakdown: The Wolverines’ second-half avalanche that engulfed Iowa in the Big Ten Championship Game remains fresh for anyone who witnessed that 42-3 bludgeoning. But after Michigan connected on a flea-flicker for a touchdown in the fourth quarter, I remember thinking that moment won’t be forgotten. Michigan hasn’t won in Iowa City since 2005, and that was in overtime. The Hawkeyes are 5-1 at home against top-five competition since 2008, and the only loss was to Penn State in 2017, on the game’s final play. Games like these are when Kinnick becomes a four-quarter steel-cage match, and the Wolverines know that all too well.

Breakdown: Iowa will become the national darlings for a week and vault up the rankings. Illinois lost a ton of players from a veteran roster, but with former Iowa team captain Bret Bielema on the sideline, you can count on a hard-hitting game. Plus, the Illini have running back Chase Brown, maybe the Big Ten’s most underrated player. There might be a hangover for Iowa after beating Michigan, and the Hawkeyes have started slowly against Illinois the past two years. Make it a third.

Breakdown: If Iowa is 6-0 and coming off a bye, the Hawkeyes are probably ranked in the top 10. If the Buckeyes are unbeaten, they’re either No. 1 or No. 2. This is not a great matchup for Iowa at this stage. The Hawkeyes probably can get physical with Ohio State and run the ball with some success. But the quick timing routes will give them problems on defense if they can’t disrupt Ohio State quarterback C.J. Stroud. Iowa’s first trip to the Big Ten’s Death Star since 2013 will be a toughie.

Breakdown: If there’s one team that gives Iowa fans heartburn, it’s Northwestern. The Wildcats have won three straight at Kinnick and usually find ways to keep games close, then frustrate the Hawkeyes over every pebble of rubber filament. This one could be different. I can’t expect a worse Northwestern squad than last year’s; Pat Fitzgerald is too good a coach. But the Wildcats don’t have the defense they did in 2020 or 2018. Iowa gets back on track in pseudo-ugly fashion, and a late defensive score makes it look more decisive than it was.

Breakdown: There were snickers about Iowa and Purdue as “most hated rivals” back in the old Legends and Leaders days when they were tabbed as permanent crossover opponents. There actually might be some truth to that in 2022. Purdue has beaten Iowa in four of the past five meetings, including a 24-7 thumping last year when the Hawkeyes were ranked No. 2. Iowa receivers Charlie Jones and Tyrone Tracy transferred to Purdue, and the recruiting trail was filled with unflattering rhetoric this summer. This is the Hawkeyes’ ultimate prove-it game. If they can’t win this one, it might be a long November.

Breakdown: A flannel-shirted, barrel-chested lumberjack bellies up next to a scruffy-faced, broad-shouldered construction worker. They argue about domestic beers and spend the next three hours trading blows. That’s Iowa-Wisconsin in a nutshell. It’s annually the Big Ten’s most physical game, and both sides embrace it. Whichever team claims the rushing battle has won 19 of the 21 meetings with Kirk Ferentz on the sideline. With sophomore Braelon Allen, the Badgers hold that edge as of today, but Iowa’s running game should improve significantly. Will it be enough in November?

Breakdown: Minnesota coach P.J. Fleck is 0-6 against Iowa counting games with the Gophers (0-5) and Western Michigan (0-1). The Hawkeyes have possessed Floyd of Rosedale for a record seven years. I get the feeling Fleck would sell his rowboat for a photo with Floyd and the Axe at the same time, even if it’s for a week. After an emotional few games, I can see Iowa dragging a bit against its ancient rival on the Gophers’ senior day. I just wonder if Fleck could beat his players in a race to the pig.

Breakdown: There are so many unpredictable elements to this matchup. Will Scott Frost be the favorite for Big Ten Coach of the Year or walking the plank? Is this one of those winner-take-all matchups that everyone expected when geographic divisions were implemented in 2014, or will one team be playing for something and the other for pride? I can envision a scenario where Iowa needs to win and help from Minnesota or Wisconsin to claim the West again. I’ll expect a fight from the Huskers per usual but the Hawkeyes pulling out the eighth straight win in the series and giving Ferentz win No. 200 in his career.

Breakdown: The moment I stopped being shocked by game results was in 2003, when invincible, top-ranked Oklahoma faced 9-3 Kansas State with the incomparable Darren Sproles in the Big 12 Championship Game. The Wildcats’ 35-7 win in Kansas City was simply stunning. I’m not predicting something similar at Lucas Oil Stadium in early December. But the Hawkeyes would be more than capable of making it a game despite every analyst likely bemoaning a repeat matchup. No program ever turns the page better than Iowa, something I witnessed in 2016. That year, the Hawkeyes gave up 598 yards in a 41-14 bashing at Penn State. The next week, Iowa started four offensive walk-ons against No. 2 Michigan at Kinnick. The 14-13 win might have been Ferentz’s finest moment.

Breakdown: Ferentz has taken the Hawkeyes to a pair of Orange Bowls, losing the first to USC after the 2002 season, then beating Georgia Tech after the 2009 season. Based on how both defenses play, this matchup would come down to turnovers and field position. It may bore the world into a good night’s sleep, but a risk-averse strategy culminating in a victory is better than any kind of loss.

May I have a word about… why is everyone on a journey? | Jonathan Bouquet