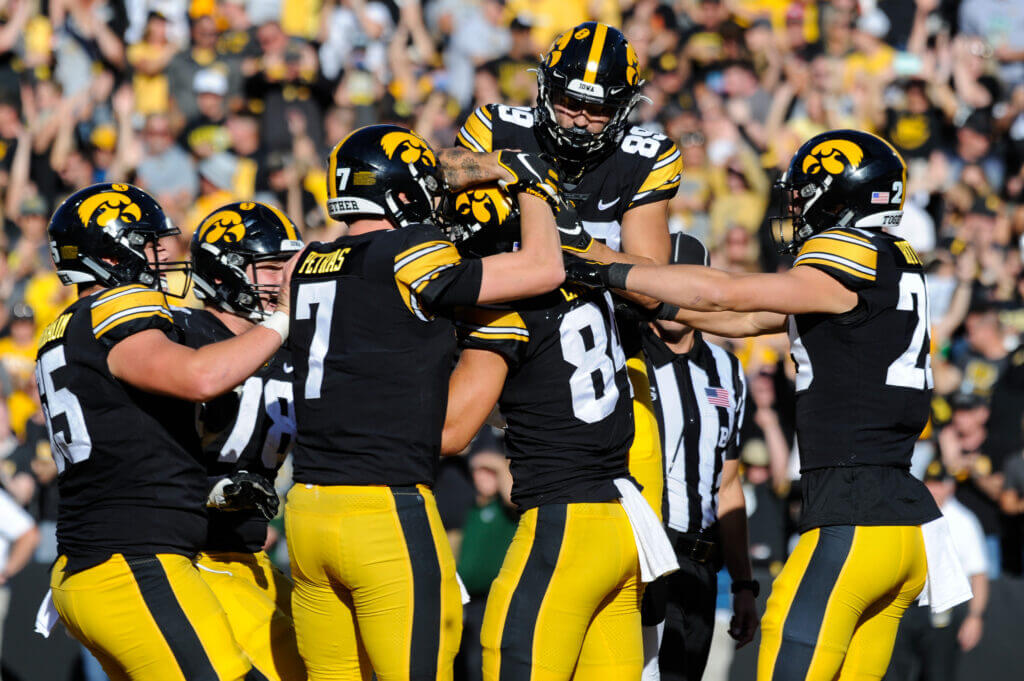 IOWA CITY, Iowa — If a person is searching for signs of animosity directed by Nico Ragaini toward his former receiver teammates, well, they’re going to be disappointed.

While he said he “definitely was upset,” Ragaini said he and Jones “were like brothers,” so his feelings were more sadness than anger. Ragaini continues to text with Jones almost daily. In fact, Jones alerted Ragaini of his transfer at the same time he informed Iowa’s coaches.

“It’s my guy. I love Charlie. He’s taught me a lot since we’ve been together,” Ragaini said. “We spent all quarantine together, just working out here together. And he carries himself like no one I’ve ever seen before. For real, he lives every day like a professional. He does everything right.

“So just learning from him has been an honor. Honestly, he’s a great guy and I wish him the best of luck.”

Communication remains open between Ragaini and other former Iowa receivers now on opposing Big Ten West rosters. Tracy attended Iowa’s open practice in April. Ragaini said they “were pretty close” and had roomed together the night before every game the last few years.

Ragaini and another former receiver teammate, Oliver Martin, also frequently talk. Martin graduated from Iowa City West High School and attended Michigan for two years, then Iowa for one year before transferring to Nebraska in 2020. But said Ragaini said Martin returns to Iowa City “every weekend” and they regularly hang out on Martin’s boat.

Still, Ragaini admits “it’s going to be strange,” to see Jones and Tracy in a different uniform, especially against the Hawkeyes on Nov. 5.

“We were both like the two old guys on the team,” Ragaini said. “So, he selfishly lets me be the only grandpa on the team. But I wish him the best of luck.”

As Spencer Petras prepares for one of the most exciting weekends of his life, Ragaini had no problem keeping his quarterback humble 900 miles away.

Petras, an Iowa senior, will participate in the Manning Passing Academy at Nicholls State University in Thibodaux, La. Before offering his longtime buddy a few plaudits for his invitation, Ragaini had to deliver a jab.

“He doesn’t stop talking about it,” Ragaini said to a few laughs. “That’s cool. That’s super exciting. I feel like that’d be like going to a Jerry Rice Wide Receiver Academy. I mean, Eli Manning and Peyton Manning. I heard all about it.”

In Nashville this weekend, former Iowa tight end George Kittle is leading the now-annual Tight End U. Current tight end Sam LaPorta had an opportunity to join Iowa predecessors T.J. Hockenson, Noah Fant and Kittle but instead chose to stay in Iowa City.

“It was kind of a thought,” LaPorta said. “My name was brought up a little bit, but man, it’s good to be here training with my boys and stuff. It’s cool what they’re doing down there in Nashville, and maybe I can go to that in the next few years. But here I am.”

LaPorta, Petras and Ragaini are close friends and not above ribbing one another. One area is related to Petras’ love of music. The quarterback grew up outside of San Francisco where Metallica lead singer James Hetfield was his youth football coach and his graduation party was held at Grateful Dead bass guitarist Phil Lesh’s restaurant. But Petras’ musical passion is folk-country singer Tyler Childers.

In early 2020, Petras led several teammates to Nashville to attend a Childers concert. Ragaini balked at the trip because “That was when I was like really against country.” Petras taught himself how to play the guitar during the pandemic, to which LaPorta said “he’s a great guitar player.” Ragaini reluctantly complimented Petras’ vocal chops.

“He’s good for bringing the guitar out,” Ragaini said. “Especially after a late night after we all go to the bar. When people come back to our house, we’re all hanging out. He always wants to bring the guitar out, and we’ll give him a couple minutes to shine. Then like, ‘All right, we gotta put that to bed.’”

Punter Tory Taylor has produced a pair of high-level campaigns for Iowa and last year he had the nation’s second-most punts with 80. But when it comes to the sport itself, the Australian native is still a novice. After all, the first time Taylor watched an American football game in person was when he participated in it two years ago.

But in his short time at Iowa, Taylor has learned much about the nuance of football and how to improve his craft. This offseason he picked up advice from former Iowa and longtime NFL punter Jason Baker on how to improve his spiral punts, which Taylor started attempting last year for the first time.

“Obviously, the ball goes farther and the ball is in the air longer,” Taylor said. “To really just rip the Band-Aid off and kind of go out there was a big thing for me, probably something that other people didn’t actually really notice. But that was a really big thing for me last year.”

As a freshman in 2020, Taylor hit just one touchback in his 40 punts. Last year, Taylor totaled 13, which didn’t sit well with him. But his 39 punts parked inside the opponents’ 20-yard line led the country, and he averaged 46.1 yards per punt.

“One thing that I’ve kind of really worked hard on and had to adapt since I’ve been here is just the wind,” Taylor said. “It’s crazy up here in the Midwest. That’s really one thing that I’m constantly thinking about during the game.”

Highlights of former Michigan defensive end Aidan Hutchinson ran ad nauseum leading up to the NFL Draft and then almost nonstop after the Detroit Lions selected him No. 2 overall. Among the most aired plays consisted of Hutchinson consistently beating Iowa’s offensive line for a sack in the Big Ten championship game.

That moment prompted a conversation between Iowa sophomore left tackle Mason Richman and senior right tackle Jack Plumb on Thursday morning. They commiserated about their overall performance last year, then their focus shifted.

“I was like, ‘You know what? The good news is Aidan Hutchinson is probably the best guy we’ll ever go against in our careers here,’” Richman said. “Eventually we might be that older guy that the young defensive end is going against or something like that. So, it’s a little bit comforting to be battle-tested like that against some of those high-level players making $20 million nowadays like our buddy Lindy (former Iowa center Tyler Linderbaum).”

From studying an opponent’s tendencies to his techniques, Richman said he took quite a bit away from his first season as a Big Ten starter.

“If you get bull-rushed one play, what are they going to do the next play after they see you either get up or whatever?” Richman said. “There’s just certain mannerisms and certain things that we can handle a little bit better and learning from older guys that are here now and all the guys in the past has certainly been helpful for me.”

Correct answer! Why Claudia Winkleman is smashing it on new gameshow One Question

Digested week: the joy of missing out on Glastonbury, and why moaning works