Kadyn Proctor, the highest-ranked recruit ever from the state of Iowa, has canceled trips to Oregon, Penn State and Michigan to focus on his top two schools: Iowa and Alabama.

Proctor, the nation’s No. 1 tackle prospect, had visited Iowa more than 10 times unofficially and originally scheduled official visits to five out-of-state schools because he felt so comfortable with Iowa’s staff. After taking the first weekend this month to see former high school teammate Jaxon Dailey, a quarterback at Arkansas State, Proctor visited Alabama. By late last week, Proctor chose to trim his options and will tour Iowa this weekend.

“I want to focus on my last high school football season, and these visits have made me miss countless workouts at school, and I feel like the University of Iowa and the University of Alabama are my top two picks for now,” Proctor wrote in a Twitter announcement.

“It was hard to cancel big opportunities like this, but I felt it was in my best interest to narrow and focus on the ones I truly believe will get me to become better and put me on the right track for success.”

Proctor stands 6-foot-8, weighs 335 pounds and sits No. 10 overall in the latest 247Sports composite rankings. An all-state lineman from Southeast Polk High School, which is located east of Des Moines, Proctor has former teammates at Iowa. Among them include true freshman safety Xavier Nwankpa, a Rivals and 247Sports five-star who enrolled at Iowa in January, and starting running back Gavin Williams.

A tough decision, but it’s all for the best 💫🖤 pic.twitter.com/BgoDtlveiC

Entering this weekend, the Hawkeyes have 12 commits in the 2023 class. Last week’s big addition was four-star running back Kendrick Raphael, who visited Iowa two weeks ago and picked the Hawkeyes over North Carolina State. Last year, Raphael (5-11, 180) rushed for 1,374 yards at 10.9 yards per carry and 18 touchdowns for Naples (Fla.) High School. In eight of his 11 games, Raphael surpassed 100 yards.

Raphael would the Hawkeyes’ first four-star running back signee since 2012. With his speed and acceleration, perhaps the best comparison is former Iowa All-Big Ten runner Tavian Banks. If Raphael can display even close to Banks’ running ability in the zone scheme, he will see action as a true freshman in 2023.

Iowa currently sits No. 18 overall in the 247Sports team composite rankings and sixth in the Big Ten.

Iowa has four commits in the 2024 class, all of whom are from small Iowa communities. They include offensive lineman Cody Fox (East Buchanan, Winthrop), linebacker Cam Buffington (Winfield-Mount Union, Winfield), linebacker Derek Weisskopf (Williamsburg) and athlete Preston Ries (Monticello). Weisskopf, Ries and Buffington all stand between 6-2 and 6-3 and weigh around 200 pounds. Their growth will determine their ultimate positions. Fox (6-4, 265) will play offensive line like his older brother, Taylor, who is a junior walk-on.

With players taking visits this month, many Iowa targets have pledged for other schools. Tight end Kade McIntyre, who visited Iowa on June 10, committed to Oklahoma last week. Tight end Jackson Carver and receiver Andre Davis, both of whom originally were slated to visit this weekend, picked Miami (Fla.) and Kansas State, respectively. Detroit-area cornerback Amare Snowden opted for Cincinnati.

Central Iowa recruits Kai Black and Jamison Patton chose Iowa State over Iowa. Black could play either receiver or tight end, while Patton is slated to play safety for the Cyclones.

With receiver Charlie Jones transferring to Purdue and defensive back Olando Trader choosing not to enroll, the Hawkeyes have 81 of their 85 scholarships filled with 18 seniors. It’s likely Iowa could add between 22 and 25 recruits in 2023. Based on the 2022 and overall numbers, here is a likely breakdown of how many the Hawkeyes could take from each position group for 2023 and their current commits: 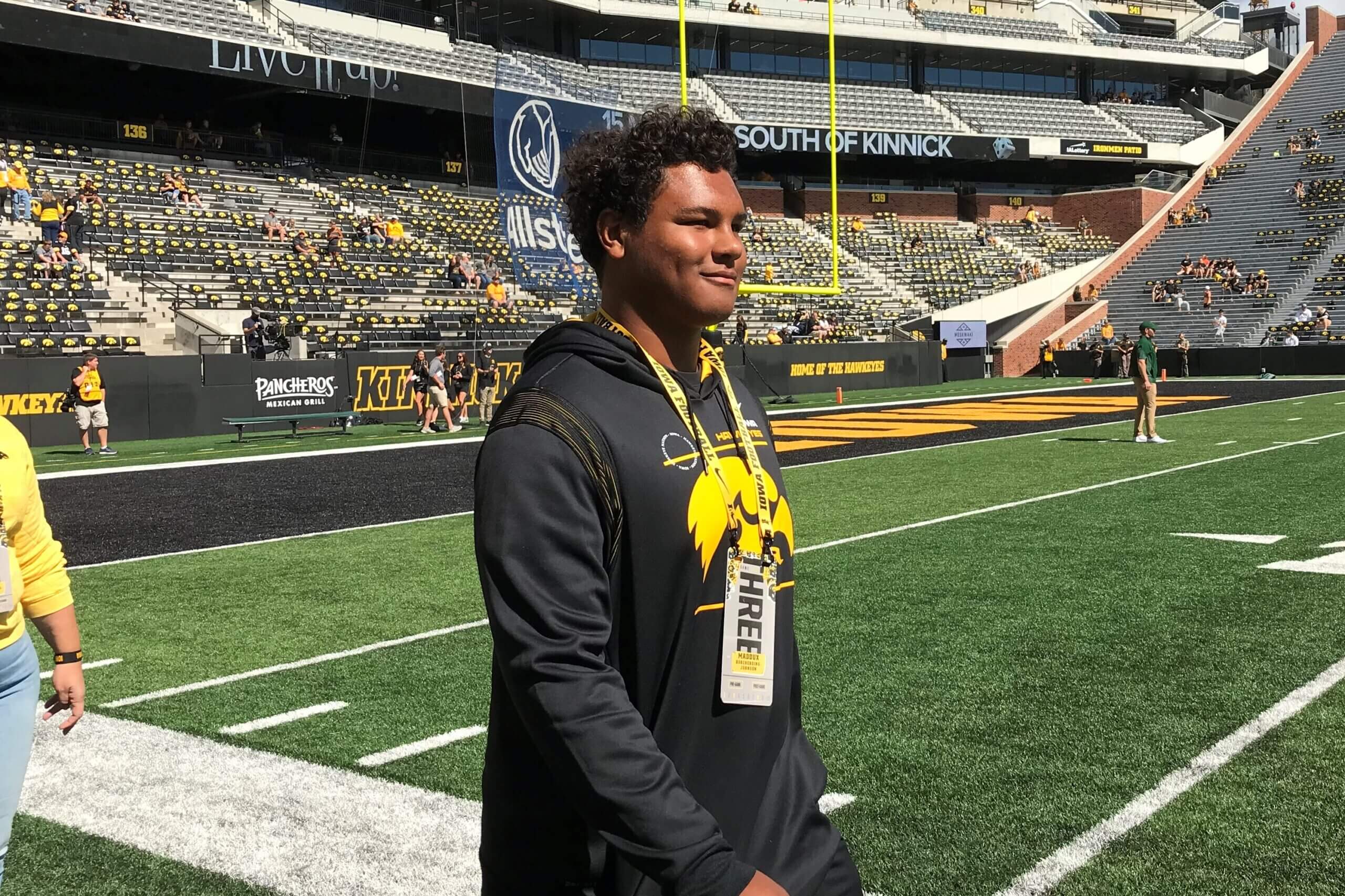 Maddux Borcherding-Johnson during an unofficial visit to Iowa in 2021. (Scott Dochterman / The Athletic)

According to Blair Sanderson of Rivals’ Hawkeye Report, Iowa will have 23 official visitors on campus this weekend, including 13 who are not committed. As Iowa’s primary visit weekend commences, below is a look at 10 players on Iowa’s priority list for the 2023 class. Other players visiting include tight end George Burhenn (6-5, 215; Mount Vernon, Ind.), cornerback Bo Mascoe (5-11, 173; Kissimmee, Fla.), defensive end Jordan Allen (6-4, 240; Olathe, Kan.) and defensive tackle Trevor Buhr (6-4, 265; Washington, Mo.).

Notable: Merrieweather (6-3, 235) plays defensive end for Michigan’s 5A state champions and shows burst off the edge coupled with short-range striking ability. In the state title game, Merrieweather recorded a pick-6 in a 25-21 victory. Merrieweather took unofficial visits to Iowa, Purdue and Cincinnati this spring, but this is his only official scheduled.

Notable: One of the Midwest’s most overlooked receiver prospects, Tibbs (6-4, 190) grabbed 10 passes for 225 yards and two touchdowns in Cathedral’s state championship victory last November. Tibbs caught 66 passes for 1,105 yards and 10 touchdowns last fall. This is his only official visit scheduled this month and his other offers are from non-Power 5 programs.

Notable: A two-way player, Ortwerth (6-5, 220) has skills that could translate as a tight end or defensive end. At Iowa, Ortwerth would play tight end. He has good size and can develop into a solid pass-catching threat. Last year for University High, Ortwerth caught 20 passes for 299 yards and five touchdowns and also had eight pancake blocks. On defense, he registered a team-high 29 quarterback hurries and 16 tackles for loss. Ortwerth has taken visits to Wisconsin, Minnesota and Pittsburgh earlier this month.

Notable: Long, lean and physical, Tate (6-3, 185) plays both sides of the ball at Kenwood. As a receiver, Tate compiled 451 yards and 10 touchdowns. On defense, he had 63 tackles, five interceptions and two fumble recoveries. Tate displays big-time hitting ability and position flexibility. Although considered a safety, he also could transition to cornerback or receiver. Tate already has visited Wisconsin and Purdue.

Notable: Terek (6-6, 295) had as wild of a Tuesday as anyone during recruiting season with offers from Iowa, Wisconsin, Michigan and Iowa on the same day in May. Terek camped at Iowa last June weighing around 350 pounds and since has lost about 50 pounds, which helped him pick up the scholarship offers. Terek’s trip to Iowa this weekend caps a busy month after previous visits to Wisconsin, Michigan and Illinois.

Notable: Howland (6-7, 280) has almost daily familiarity with Iowa, thanks to his quarterback Marco Lainez picking the Hawkeyes last fall. Howland currently plays tight end and defensive end, but his future is set at offensive tackle. Howland has spent his June taking official visits to Oklahoma, Michigan and Miami (Fla.) before his trip to Iowa City this week.

Notable: Newsom (6-3, 215) rushed for 690 yards, caught nine passes for 63 yards and scored seven offensive touchdowns last season. But he will play linebacker or edge rusher in college, which he showed on defense last year with 17 tackles for loss and seven sacks. Newsom helped Waverly-Shell Rock reach the Class 4A state semifinals last fall. This spring, Newsom ran the 200 in 22.59 seconds, the 400 in 50.22 and 400 hurdles in 55.4.  His older brother, Mosai, will be a fourth-year defensive lineman at Nebraska. Newsom already has visited Minnesota and Stanford this month.

Notable: Lauck blends every intangible Iowa likes from its offensive linemen, and that doesn’t include his optimum size (6-6, 290). He attacks defenders, drives through them and finishes in nasty fashion. He also can block in space. Lauck has taken several trips to both Iowa and Ohio State this spring, and last weekend he visited Michigan State.

Notable: Gilbert (6-5, 270) was a handful for Cathedral’s opponents in the team’s state-title run, both as an inside and perimeter defensive lineman. He finished with five sacks, six hurries, five passes defended and 45 tackles. With his size, power and motor, Gilbert has the potential to develop into a terrific defensive tackle. The biggest competition for Gilbert comes from LSU, where he visited on June 10.

Notable: Proctor (6-8, 335) is the top target for Iowa, and he’s been a priority for multiple years. The interest has been mutual between the Iowa staff and Proctor, who chose his No. 74 jersey based on former Iowa and current Tampa Bay tackle Tristan Wirfs. Proctor is close friends with Nwankpa and together they were a force for Southeast Polk’s state title team. Proctor has size and matches it with athletic ability, toughness and work ethic. Proctor’s choice is between Iowa and Alabama.

A British bill of rights? This draconian plan is a rights removal bill