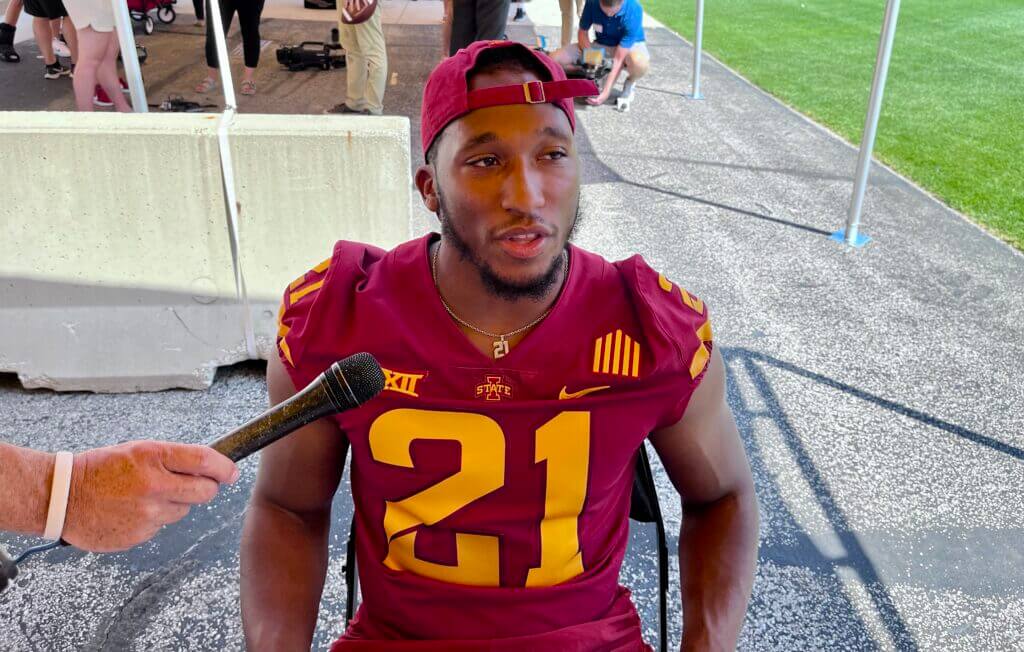 AMES, Iowa — The next time the Iowa State Cyclones march from their locker room, burst through the pregame smoke and sprint onto Jack Trice Stadium, Breece Hall will become a memory.

Nobody will wear No. 28 this year, nor should they. Hall set an FBS record by rushing for touchdowns in 24 straight games. He twice was named a consensus first-team All-American and the Big 12 Offensive Player of the Year. In three seasons, Hall rushed for 3,941 yards and 50 touchdowns. He also caught 82 passes for 734 yards and six scores.

Replacing a player like Hall, whom the New York Jets selected in the second round, is difficult. Replicating him is impossible. But finding a way to incorporate what Hall brought to the Cyclones the past two years with their remaining runners is critical in how the program moves past the all-time great.

Four running backs are vying for the position vacated by Hall, and all have different skill sets. Jirehl Brock (6-foot, 220 pounds) is a junior who has the most experience and started in Hall’s place when he sat out the Cheez-It Bowl. The other competitors are redshirt freshman Eli Sanders (6-0, 200), sophomore Deon Silas (5-8, 180) and true freshman Cartevious Norton (5-11, 212).

Brock was a four-star prospect when he and the three-star Hall arrived in 2019. Brock and Norton display many of the required all-around traits, while Sanders combines elite speed with underrated strength after gaining 5 pounds this summer. Silas is quicker than his teammates — and just about everybody else, too.

“We’ve had great players so far in our program at that position,” Iowa State coach Matt Campbell said. “Right now, you would say at least coming out of the spring, as a coaching staff, we felt maybe we’re as healthy and as competitive as we’ve ever been right now at the running back position.”

Iowa State holds its media day today. Here’s our State of the Program story on how the Cyclones hope to meet rising fan expectations.

On another note, Iowa State and Kansas State should play for ‘The Reaper.’ (My son’s design)@TheAthleticCFB https://t.co/9NTY2p7zDS pic.twitter.com/wyx0JjKgH7

The Cyclones’ situation mirrors what Campbell experienced in 2019 when David Montgomery left for the NFL as a third-round pick. Iowa State had holdovers Kene Nwangwu and Johnnie Lang along with Hall and Brock, who were true freshmen. Through the first five games, Hall had 18 carries, less than half of Lang (39) and similar to Nwangwu and Brock.

In the Cyclones’ sixth game in 2019, Hall elevated from only one rushing attempt in the two previous games to a 26-carry, 132-yard, three-touchdown performance against West Virginia. Hall then rarely left the field during the next two-plus years.

“I think there for sure are similarities anytime that you are replacing a guy that’s been an All-American, like we were when we were replacing David and more recently replacing Breece,” said Nate Scheelhaase, Iowa State’s running game coordinator. “I would say a little bit of the difference is that you do have Jirehl, who has been in critical moments, probably as much or more so as anybody that was making that transition at that time. I think that you look at the talent that Deon, that Eli, that Cartevious have. They also have a great level of maturity as far as their discipline and being students of the game.

“I don’t think anybody is saying that Deon is the same as David Montgomery or Jirehl is the same as Kene or Eli’s same as Breece. They all are really confident in who they are and what they can do on the football field, which again, I think allows them to be the best version of themselves on those 12 Saturdays in the fall.”

Brock saw limited action as Hall’s understudy with 174 yards on 37 carries last year. He rushed for 42 yards on a career-high 14 attempts against Clemson in the Cheez-It Bowl.

When asked about Hall, Brock said the question hit him in “the feels” and he “lost my best friend.” They still talk frequently, including just hours before Brock met with reporters Tuesday at ISU’s media day.

“I try not to think of it as replacing him,” Brock said. “But how do we continue on what’s been going on in the running back room the past few years?

For Scheelhaase, this month is about blending and separating the unit’s strengths and deciding whether he should incorporate a committee approach or trust one back to emerge. Like in 2019, it might take time before he makes that decision, perhaps even through the first month. The backs have to build trust in all areas, not just break a few long runs. Among the areas Scheelhaase highlights include blitz pickup, turning a minus situation into a short gain and blocking. He also looks for how the players’ skill sets can help the offense holistically or in sub-packages.

“At the forefront of our offensive mentality is players, formations, plays,” Scheelhaase said. “Well, what do our players do? What allows them to be at their best? As coaches, where can we grow them as far as what they bring to the table as far as their style goes? And I think the more things that any running back can do on the field, the more dynamic it makes you.”

Hall combined great strength and speed. He could break tackles, make defenders miss or blow defenses away with his 4.39-second 40-yard dash time. He often made his offensive linemen look good, which they appreciated. It’s not the same, but during spring football, the offensive line gained confidence in the current group of runners.

“Breece was a once-in-a-lifetime running back,” offensive lineman Jarrod Hufford said. “To be honest, if we made a mistake, he could fix it. But with Jirehl, Eli, Deon and even Cartevious, the new guy, building our trust with them, I think really happened throughout the spring.

“Jirehl’s fast. He can make really good cuts. Eli’s really fast. Cartevious can really put his head down and blow a hole. We developed that throughout the spring, and I think as the season goes, we’ll continue to see who we are. But I have no lack of faith in the running back room this year.”

Delta flights attendants race to unionize: ‘We’re the people behind the profits’