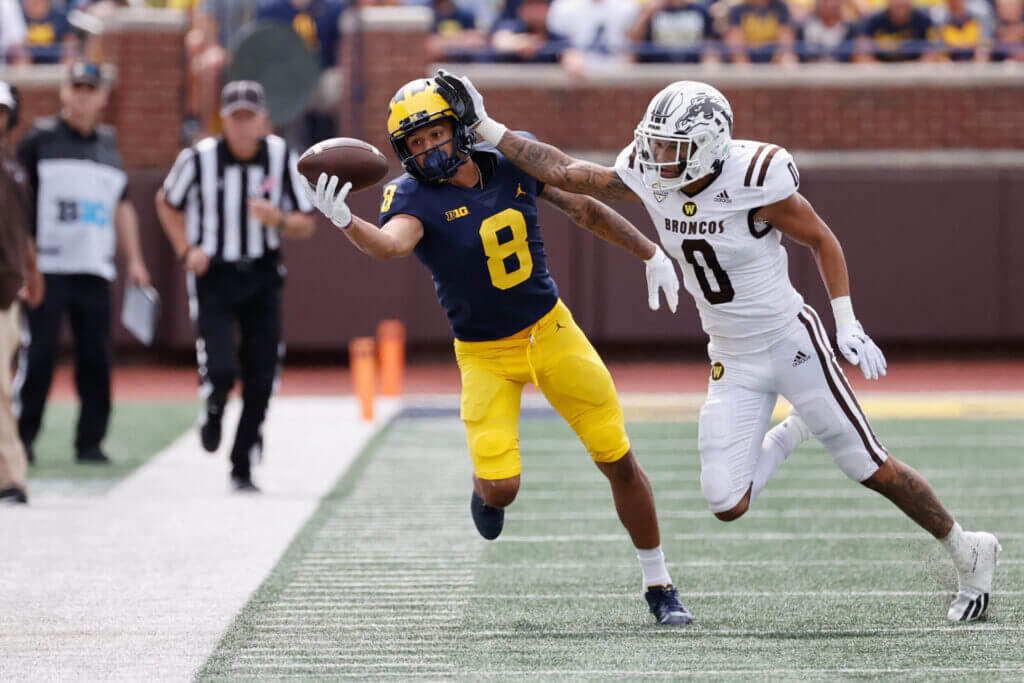 The overlapping careers of those players provide a history lesson for Michigan’s current crop of wide receivers. There’s no one better than Bellamy, a wide receiver at Michigan from 1999 to 2002, to put it all in perspective.

“What I know about Michigan football and wide receivers (is) we’ve always been loaded,” said Bellamy, who replaced Josh Gattis as Michigan’s wide receivers coach after coaching safeties a year ago. “This has been a position that has great history, great tradition, One of the things is, you compete. You don’t have to be a starter to compete. You want to get on the football field, whatever you have to do.”

Ronnie Bell isn’t quite ready to have his picture on the wall, but he’s been around longer than anyone. Bellamy calls him the alpha of the group, a title Bell naturally reclaimed after missing most of last season with a torn ACL.

With Bell back at full strength and almost everyone returning from last season, the Wolverines have a surplus of options at wide receiver. Coach Jim Harbaugh said on a recent podcast that Michigan’s wide receivers group could be “the best we’ve ever had,” and though it’s tough to compare across the entirety of Michigan’s football history, this group has a strong case as the deepest of Harbaugh’s eight seasons.

To be considered the best, the Wolverines will have to back it up with production on par with great receiving corps of the past.

“It just comes down to making plays and what you put on film,” Bell said. “We’ve got the whole room capable of that. I feel like it’s a great position to be in when you’ve got that many guys that you feel comfortable with.”

Some simple back-of-the-napkin math reveals the challenge for Bellamy and Michigan’s offensive staff. Michigan is a team that leans heavily on its running game, and even if that equalizes a bit without Hassan Haskins, running backs and tight ends will feature prominently in this year’s offense. That leaves only so many touches to go around for a wide receivers lineup that conceivably could go eight or nine deep.

Michigan’s wide receivers combined for 128 receptions last season, 22 fewer than Western Kentucky’s Jerreth Sterns, the leading receiver in FBS. That was mostly without Bell, who caught 48 passes in 2019 and 26 in the six-game 2020 season. Assuming Bell returns to his pre-injury production, the Wolverines have two options: Either the group increases its collective output by a significant factor, or someone will end up taking a backseat.

“Our guys have that understanding that the best players will play and the guys who do things well will get an opportunity to showcase what they can do,” Bellamy said.

In Bell’s absence, Michigan’s other wide receivers had to adapt to different roles. Cornelius Johnson, Michigan’s leading receiver with 40 receptions for 627 yards, was the top outside target, complemented by Roman Wilson’s vertical speed and A.J. Henning’s versatility. Andrel Anthony was an intermittent presence, but he showed his big-play potential with a huge game against Michigan State and a touchdown catch in the Orange Bowl against Georgia.

“My favorite part about last year was watching the receivers grow every week,” Bell said. “Everybody stepped up and started making plays. (The injury) was maybe like a speed bump, but they just got rolling and just started dominating.”

Responsibilities will have to shift again now that Bell is back in the equation. Bell said he had no qualms about reprising his role as a punt returner after tearing his ACL on a punt return last year against Western Michigan. His tenacity as a blocker will be a welcome addition, especially with Mike Sainristil now playing the majority of snaps on defense.

“Mikey definitely set the standard,” Bellamy said. “Now you take Mikey and multiply by however many guys we have in our room — that’s the attitude we bring to our room. We’re going to be not just pass catchers, but we’re going to be tough and physical in the run game as well.”

One player embodying that attitude is freshman Darrius Clemons. Michigan’s depth will make it tough for Clemons and fellow freshmen Amorion Walker and Tyler Morris to carve out substantial roles, but Clemons has made it known he’ll do whatever it takes to get on the field, Bellamy said.

“He’s a bigger guy,” Bellamy said. “He’s 210 and he’s strong as an ox. He’s explosive and loves contact. … Darrius is that guy who says, ‘I don’t care if it’s a blocking play, put me in.’ It’s pretty cool for a young guy to carry that torch.”

Michigan has other capable pass catchers in tight ends Erick All and Luke Schoonmaker and running back Donovan Edwards, all of whom should be involved in the passing game. Finding the right blend at wide receiver may take some time, but it’s easier now that the Wolverines have their alpha back on the field.

“I’ve been thinking about playing a game for a year now,” Bell said. “I’m beyond excited, man. I’m ready to go.”

A refugee in a Parisian underpass: Myr Muratet’s best photograph