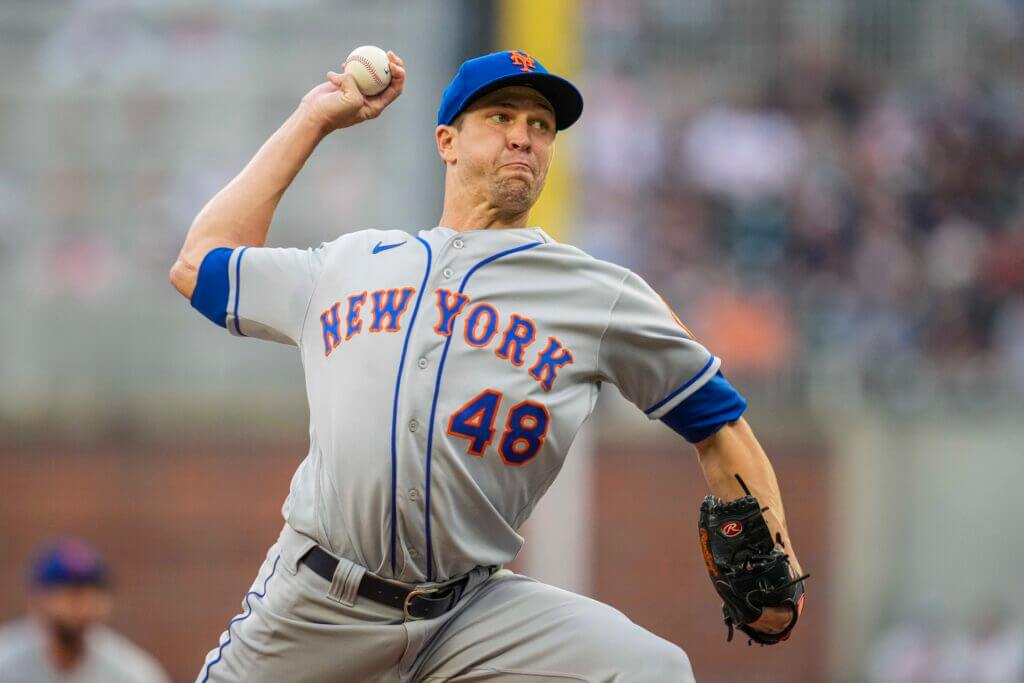 ATLANTA — There were times when Jacob deGrom grew so frustrated he slapped his glove with his bare hand after a hit or kept his back leg in the air on a follow-through for an extra second after missing a location. Despite another impressive outing, he kept his head down during his walk back to the dugout with two outs in the seventh inning. And while in the dugout when the Braves scored the go-ahead run, deGrom pulled his glove close to his face and talked into it.

All those moments Thursday night indicated the same thing.

It’s not going to be that easy.

The Mets arrived here with a chance to expand the gap between themselves and the second-place Braves wide enough to exhale as much as any contending team can afford to do so heading into September. Instead, they lost Thursday night, 3-2, and dropped three games of a four-game series. It was the first time this season that they lost a series to a team from the NL East. Their lead in the division is down to 3 1/2 games.

The Mets will next play the Braves in the second-to-last series of the season Sept. 30-Oct. 2. All three games are in Atlanta. Those are the only three games left between the two teams. Never mind that for now, though. There’s so much still in front of the Mets over the next handful of days against playoff-caliber teams such as the Phillies and Yankees, let alone the regular season’s remaining 43 games.

All season, the Mets have proved that they’re a strong team, and a road-series loss to the defending World Series champion doesn’t change that. But the way the four-game series ended was a chilling reminder that just having deGrom — even as he again pitched well and proved he’s just about ready to be unshackled from restrictions after missing more than a year of action — isn’t always enough. A lesson ahead of October? An advantage means little when not properly supported.

Because even after dropping the first two games of this series against the Braves with both Mets starting pitchers — Carlos Carrasco and Taijuan Walker — leaving after two innings with respective injuries, things lined up fine for New York. Max Scherzer had the third game, high-leverage relievers remained available and deGrom would start the fourth game. A split seemed more than plausible. Not what happened.

Behind Scherzer and a host of contributors offensively, the Mets beat the Braves, 9-7, on Wednesday. The next night, deGrom gave the Mets his longest outing of the season in terms of both innings and pitches, yet it wasn’t enough.

In 6 2/3 innings, deGrom allowed five hits and three earned runs with no walks and nine strikeouts. After experiencing some command issues with both his slider and fastball, he self-corrected his mechanics like he almost always does and resumed taking over the game. At one point, he retired 12 batters in a row. He threw 95 pitches, up from his total of 76 from each of his prior two starts. For a team as good as the Mets, it should’ve been plenty.

The Mets lost Thursday in part because a few close plays didn’t go their way. That happens. But they also lost because their struggles against left-handed pitching continued and they failed to cash in on golden opportunities to score. That’s less excusable.

As good as Max Fried was Thursday — and he was excellent, generating called strikes and whiffs with all five of his pitches — the Mets had chances. In the third inning, they had runners on first and third with none out and didn’t score; two strikeouts and a groundout followed. In the eighth inning, James McCann hit a one-out double, but that was all the Mets got in the frame.

In the ninth, there was some bad fortune for the Mets. Francisco Lindor attempted to steal second base. As Pete Alonso hit a pop-up to right field, Lindor slid into second base. As the ball fell, he scampered to his feet in an effort to retreat to first. He was thrown out on the force play at second. Manager Buck Showalter said Lindor did the right thing, that Alonso thought it was a pitch to hit so swinging also made sense, and added, “Just one of those plays, fortunate for them.”

Earlier, there were more plays of that kind. The last batter deGrom faced was Vaughn Grissom, who won an eight-pitch battle by hitting an 83 mph grounder that third Brett Baty knocked down while ranging to his left but couldn’t come up with in time to make a play. Seth Lugo replaced deGrom and allowed a 90 mph, ground-ball double to Michael Harris II that scored Grissom to make it 3-2.

Grissom was running on the 3-2 pitch. Second baseman Jeff McNeil was playing back in shallow right field. Lindor was shaded toward second base. Center fielder Brandon Nimmo was positioned in the left-center gap. The ball trickled between McNeil and Lindor. As soon as Grissom’s right foot touched second base, third-base coach Ron Washington started waving him home. Grissom beat first baseman Darin Ruf’s relay throw to the plate after Nimmo, playing deep in center field, retrieved the grounder just to the right of second base. By the time it reached Nimmo, he said, the ball was barely rolling. The only thing he said he might’ve done differently was to throw directly home, but even that was tough for him to second-guess at the moment. Thursday night, what-ifs were plentiful.

The Mets now go to Philadelphia for four games in three days with questions surrounding their starting rotation. With Carrasco expected to be out three to four weeks with a low-grade left oblique strain, the Mets starters for their doubleheader Saturday are David Peterson and Trevor Williams. Walker won’t start Sunday unless he’s feeling 100 percent, and that’s not a sure thing. Walker’s MRI revealed a slight disk bulge in his lower back. Walker called it “the worst pain I ever felt” and said he was “shocked” that he was feeling so good two days later. There’s optimism there.

Still, it’s clear that over the next few weeks, the Mets are going to need to lean on their aces, Scherzer and deGrom. They showed over the last two days that they are up to that challenge. All the Mets have to do is take advantage of that.

“We wanted to come in here and win all four games,” deGrom said. “But once they won a couple the goal was for the split and we weren’t able to get it. Disappointed with it, but we have got to go play tomorrow.”