Rondo drills are a staple of training at Manchester City under Pep Guardiola.

Last month, about 500 City supporters watched Guardiola’s players doing rondos during an open training session at the NFL’s Green Bay Packers’ Lambeau Field ahead of their friendly there against Bayern Munich.

What may have surprised those present was the player who looked most at ease on the ball as the temperature gauge in Wisconsin nudged past 90 degrees.

James McAtee may have long been earmarked as a star of the future by City’s academy staff, even prompting favourable comparisons with Phil Foden at a similar age, but with just six substitute appearances in senior football, the teenager is far from a household name.

Nevertheless, there he was, impressing among exalted company including Kevin De Bruyne and Bernardo Silva.

For the next nine months, McAtee will be in the company of his new Sheffield United team-mates.

Having already borrowed midfielder Tommy Doyle from the back-to-back champions last month, Paul Heckingbottom has made McAtee his fourth loan signing from the Premier League. And with all due respect to Doyle, Reda Khadra (Brighton) and Ciaran Clark (Newcastle), he seems likely to be the biggest coup of them all.

Dubbed the ‘Salford Silva’ by team-mates in a nod to City legend David, the 19-year-old made his Premier League, Champions League, FA Cup and Carabao Cup debuts last season.

McAtee has contributed 26 goals and 16 assists for City’s under-23 side over the last two seasons despite playing primarily in midfield, and also found the net against Scunthorpe United in the Papa John’s Trophy last August.

With a running style likened to former England international Jack Wilshire, McAtee’s frame may seem slight at first glance despite him being just short of 6ft (182.9cm) tall. But observers at the Etihad say the benefits of training every day with the first-team squad last season have made him a tough opponent to knock off the ball.

It should also be noted that his dad, John, was a talented rugby league player with St Helens, one of several in the family to play that physically demanding sport — one of McAtee’s grandfathers, also called John, was one of four brothers to turn out professionally for Swinton and Leigh.

Mum Gill, meanwhile, is a dance coach, which may explain why United’s new signing has been known to celebrate scoring with a somersault or two.

The big question now is whether he can demonstrate that attacking prowess in the Championship.

The Athletic assesses what United can expect from their latest signing.

City, who are already five goals up from the first leg, are hosting Sporting Lisbon in the Champions League round of 16. Half-time arrives. It’s 0-0 on the night.

Guardiola decides this is the perfect time to bring on two substitutes. Riyad Mahrez is one, the Algeria international replacing Bernardo Silva. The second is McAtee, who by this point in the season has already scored three hat-tricks for City’s youth sides. He comes on for fellow academy graduate Foden.

The youngster proceeds to complete 21 of his 26 passes and has 37 touches of the ball, a couple of which come in the Sporting penalty area. Four of five attempted dribbles are also successfully completed.

City don’t make a breakthrough, but it isn’t for the want of trying by McAtee, whose guile and vision helps create decent chances for Gabriel Jesus and Raheem Sterling.

The first comes nine minutes after the restart.

As Jesus cuts in from the left flank with the ball, McAtee looks to find space behind the defence with a dart forward. 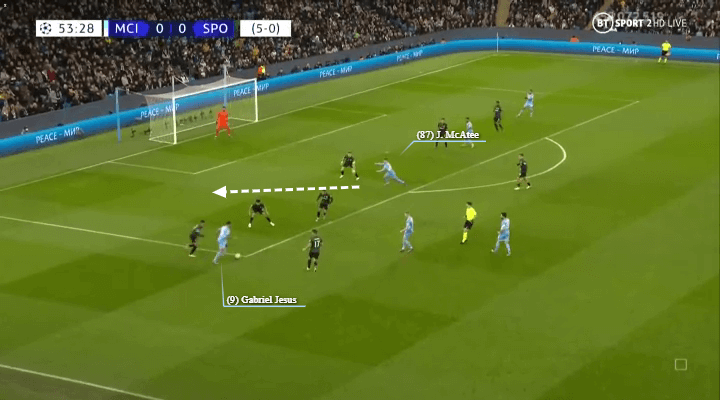 His run is spotted by Jesus, who lays the ball off and continues his own run forward. McAtee then backheels a first-time return pass to the Brazilian and a shot looks on, only to be thwarted by a last-ditch slide challenge. 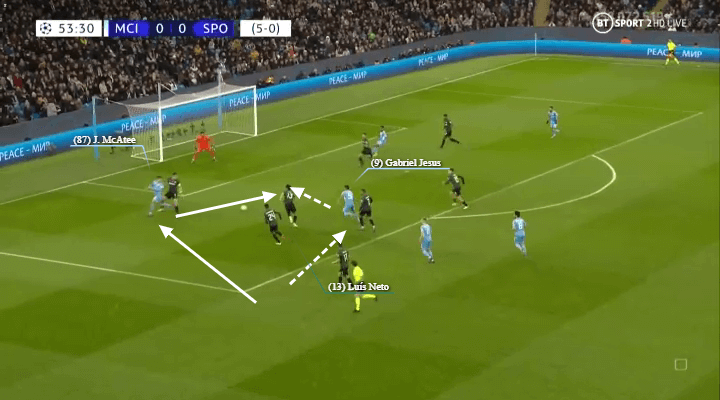 McAtee’s second attempt at fashioning an opening for a team-mate is even more audacious. 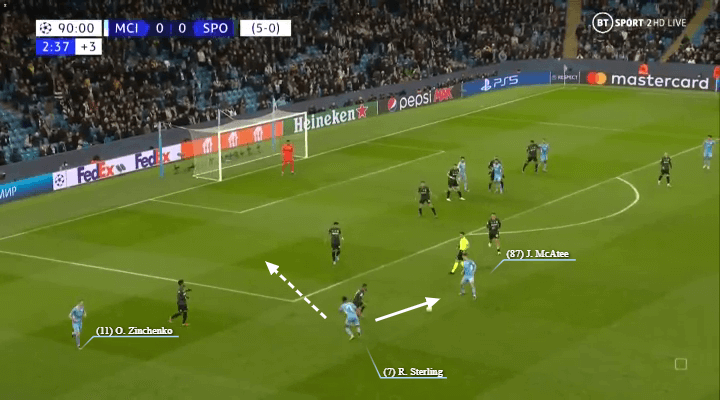 …and immediately sets off on a run that McAtee finds with a scooped pass over two defenders. 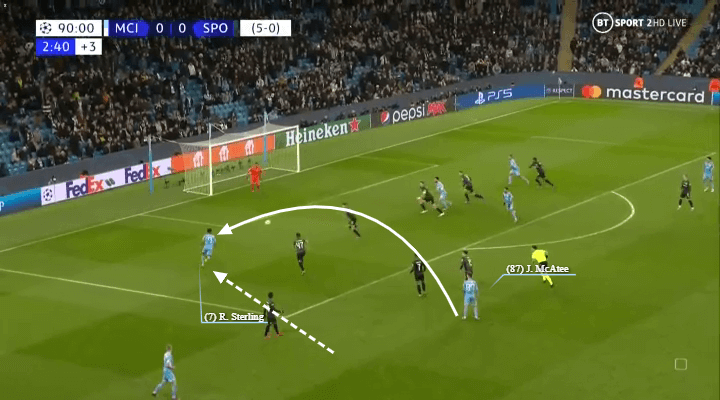 The pace on the ball allows the England forward, now behind a defence caught flat-footed by McAtee’s vision, to take a touch before firing into the side netting.

On a night when City had a trio of Champions League debutants, Guardiola picked out McAtee for praise.

“A guy who is in a good direction,” said the Spaniard. He did, though, add a caveat, pointing out the teenager’s pressing — an integral part of how City play — was not quite right at certain moments.

City want to see him develop such parts of his game while also coping with the robust nature of the Championship — that’s why United have been able to land such a talent, albeit temporarily.

It is a feather in United’s cap that Guardiola has chosen — and it is very much the Premier League club’s choice — the Lane as the best destination for him among many options for such a prodigious talent, with a host of Premier League and second tier managers enquiring after the 19-year-old.

As with Dean Henderson and Morgan Gibbs-White, the club’s two biggest loan successes in recent years, the hope is McAtee will benefit from being part of a demanding dressing room where respect has to be earned.

Just where this natural left-footer will slot into the team remains to be seen, especially considering there is now a plethora of attacking midfielders at the club, with Heckingbottom looking to fill the huge hole caused by Gibbs-White’s return to Wolverhampton Wanderers after his stellar spell on loan last season.

Khadra played as both a No 10 and on the left of an attacking midfield duo behind lone front man Rhian Brewster after being brought off the bench in Monday’s season-opening 1-0 defeat away to Watford.

Iliman Ndiaye and Sander Berge have also previously both performed well when asked to support the attack from advanced midfield roles, while Doyle is still waiting for his debut after suffering a thigh injury soon after arriving from Manchester.

Throw in Ben Osborn, a player Heckingbottom deployed upfield when in caretaker charge of 1-0 wins over Brighton & Hove Albion and Everton in the Premier League, and the manager will not be without options — providing everyone stays fit.

Judging by his exploits for City Under-23s last season, McAtee will bring dynamism, drive and no little skill to the United side.

Take, for example, his hat-trick goal in their 5-3 defeat to Club Bruges in the UEFA Youth League in November.

Collecting a pass 10 yards inside the City half and with a marker breathing down his neck, McAtee executes a turn not dissimilar to the one that earned Johan Cruyff footballing immortality at the 1974 World Cup. 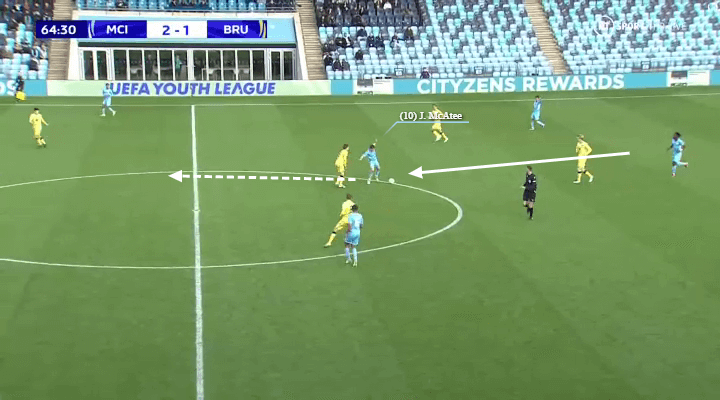 With the pitch suddenly opening up in front of him, the 19-year-old races forward unchallenged. When the Belgian visitors belatedly attempt to block his path, he hits an unstoppable left-footed shot into the net from 25 yards. 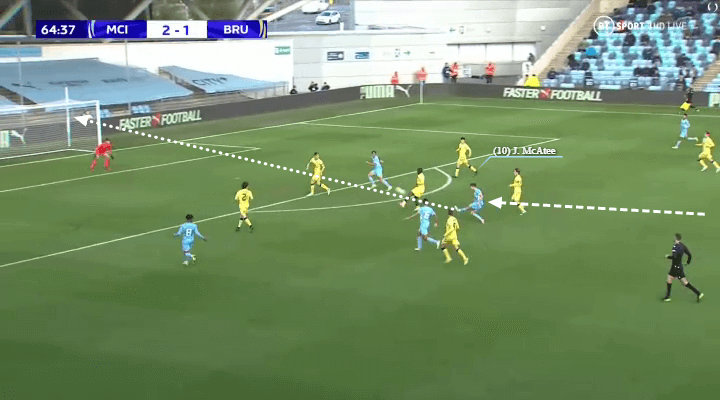 Having earlier scored from a tight angle on the left, and with a deflected shot from a central position after another forceful run, it was quite the afternoon for McAtee, who would go on to be named Players’ Player of the Year for City Under-23s.

United fans will be hoping for more of the same from the England Under-21 international.

It promises to be an exciting campaign at Bramall Lane.

‘They all knew’: textile company misled regulators about use of toxic PFAS, documents show | PFAS